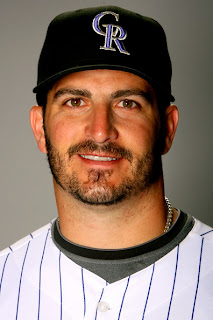 Call it what you want. Jason Marquis has had three starts to get his 13th win of the season, and in each start has failed to do so.

Saturday night was a tough one to swallow for the right-hander. Coming into the game when facing former teams in 2009, Marquis has gone 4-1, defeating the Cubs at Wrigley, the Cardinals in St. Louis and at home, and the Braves in Atlanta. His lone defeat came at home against the Braves in July.

While Marquis battled, he never had his best stuff. He walked a season high five batters, three of the free pass came in the Cubs two run fourth inning, when Marquis walked three batters with two outs.

The third walk came to pitcher and .075 hitter Ryan Dempster, forcing in a run for the Cubs.

The Rockies fought back, but ended up losing the game 6-5, losing a game in the Wild Card standings to the Giants, who were able to hold off the Reds.

While the Rockies are only one game back in the Wild Card and seven back in the National League West race, the loss raises a few eyebrows.

Before the All Star break, there were a few things that that the Rockies were happy with. One of those was the starting pitching. It seemed that on days in which Marquis and Aaron Cook pitched, it was nearly a done deal for the opposition.

The way their respective sinker balls were diving, and the way the Rockies play defense behind them, there was little to no chance for a team to beat the Rockies.

On days when Ubaldo Jimenez took the mound it seemed that if the Rockies could score four runs or more, they would also be adding another win to the standings.

Since the All Star break things have changed, however, as Marquis and Cook are both struggling. Not just slumping, but clearly struggling.

In Cook’s last start in Philadelphia, the redhead was unable to hold down a first-inning lead for the Rockies. After that, he was unable to keep the ball down, giving up a home run to journeyman and light-hitting catcher Paul Bako, then serving up a triple to Jimmy Rollins.

This came on the heels of giving up a lead in Cincinnati due to two home runs hit in the sixth inning.

For Marquis the long ball has not been the big problem, but the dominant Marquis that was a steal of a trade from the Cubs is nowhere to be found. His sinker ball is not as fluttery and his command seems to be lacking.

Marquis has been bothered by a blister on his right index finger, something that may be bothering him just enough to make it difficult to get a good feel for his pitches.

There is one simple reason that the Rockies are still in the Wild Card hunt. Their starting pitching has been dominant and given them a chance to win night in and night out.

While the offense has found ways to score runs (second most in the National League), the starting pitching has made the single biggest turnaround, giving the offense a confidence to go out and score runs, knowing that they will not simply be handed back to the opponent in the next half inning.

If Marquis and Cook do not turn the corner quickly for the Rockies, showing that these poor starts of late have been a result of a slump rather than a tiring arm or a lack of focus, then these Rockies may watch the Wild Card get further and further away.

On the other hand, if the Marquis and Cook pitch like they did in May and June, the Rockies should stay in the fight for the playoffs all the way down the stretch.

With two games to go in a four game series with the Cubs, the Rockies try and secure at least a series tie by sending Jason Hammel to the hill to face Cubs rookie phenom Randy Wells who is 8-4 but has won his last seven starts and is a leading candidate for National League Rookie of the Year.

Hammel has struggled at Coors Field and looks to show that he is capable of pitching in the altitude of Coors Field. Game time is 1:10 MDT.