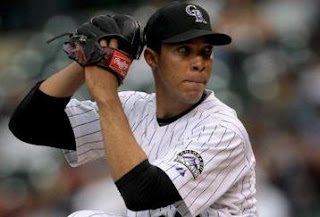 After battling it out over the course of 10 games on the road, the Colorado Rockies returned home to Coors Field for an important series with the Cubs chock full of playoff implications.

The Chicago Cubs are in the thick of the N.L. Central race, swapping positions on what seems like a daily basis with the surging St. Louis Cardinals. Despite having their eyes set on the division title, the Cubs also know that making up ground in the wild card race is hugely significant.

The Rockies strolled onto the field and played with a swagger and confidence that was missing during the 10-game road trip. It was clear that they were ready to play in their backyard and sleep in their own beds.

The Rockies broke out the bats, scoring three runs in the first inning, and continuing to pile on the runs, beating the Cubs 6-2.

Fans were probably surprised when the lineups were announced, as Sean Marshall was put on the mound to start in an emergency situation because Zambrano, who had to leave his last outing in the third inning with back stiffness, was stratched with just 20 minutes before the first pitch.

Zambrano went to the bullpen and before even throwing off the mound, squinted in pain, and told manager Lou Piniella that he would be unable to go.

It was a situation that the Rockies needed to take advantage of. Marshall had not thrown more than 20 pitches in an outing since June, and had little time to prepare, let alone warm up.

Take advantage is exactly what the Rockies did, forcing Marshall to throw 41 pitches in the first inning, giving up three runs. After Dexter Fowler struck out to lead off the first, Carlos Gonzalez, quickly living up to his potential, smoked a hanging breaking ball down the right field line.

Todd Helton then extended his hitting streak to 11 games with a seeing-eye single back up the middle, scoring Gonzalez. Troy Tulowitzki then laced a ball to center field, hustling to second base for a double. Brad Hawpe came to the plate and delivered, hitting a two-RBI single.

With Ubaldo Jimenez on the mound, that was all the Rockies would need.

Jimenez went 6-2/3 innings giving up only two runs, one earned on four hits and struck out six. He walked six.

The only cause aspect of Jimenez's game that would be a cause for concern was the high walk total. With a 3-1 lead in the fourth inning, Jimenez issued a walk to Kosuke Fukodome, then a base hit to Milton Bradley.

Suddenly Jimenez was facing Cubs slugger Derrek Lee. Lee launched a ball deep to left center field that gave a sinking feeling to Rockies fans who were excited by the early lead.

The feeling did not last long, as Gonzalez caught the ball right next to the 390-foot sign on the wall, saving Jimenez and the lead.

Jimenez once again walked the leadoff hitter in the fifth and that, after an error, that came around to hurt Jimenez.

Overall, the hard-throwing righty was dominant, but he never completely shut the door on a good Cubs offense. Jimenez has all the talent in the world; on one pitch on Friday night, his fastball hit 101 mph. When he is simply trying to get a ball across the plate, his fastball is 95 mph.

The 25 year-old will figure it out. He gets better after nearly every single outing. It is not a matter of if, but when.

The Rockies and their fans are hopeful that Jimenez turns that corner sooner rather than later. Having a Ubaldo Jimenez who is nearly unhittable would nearly guarantee that the Rockies will be in the middle of the playoff hunt come late September.

For now, the Rockies will move forward in their four-game series with the Cubs. Winning two of the next three would be a huge step for the club, who plays the majority of its games from here on out at home.

Rockies fans will do their best to shout louder than Cubs fans once again on Saturday night at Coors Field. First pitch is at 6:10 with All-Star Jason Marquis taking on his former team, trying to make the wound of losing him that much greater.