The 1950 Phillies, affectionately nicknamed the Whiz Kids due to their youthful age, clinched the National League pennant on the final day of the regular season.

Led by Robin Roberts and Richie Ashburn, the Phillies would make their second trip to the World Series.

Their opponents would be the defending world champion New York Yankees, who were looking to add their 13th title to their franchise history. The experienced Yankees would sweep the Whiz Kids, although all but one was a one-run game.

Yankee Stadium was already a place where legends were born and where legends played. This Yankees team had a legend of their own in Joe DiMaggio. As intimidating as the aura of Yankee Stadium could be, the Whiz Kids showed that they would not suffocate under the pressure. Or did they? 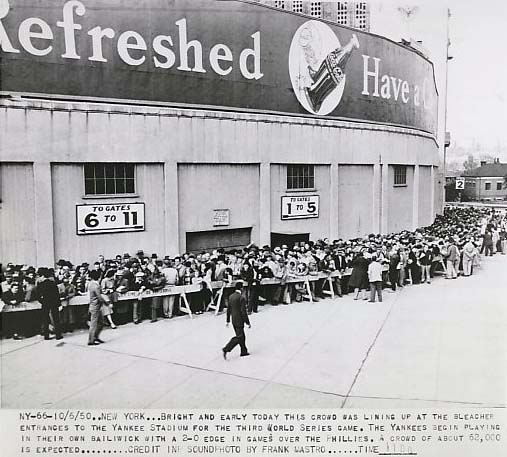 Playing their first game ever in Yankee Stadium, the Phillies both rallied to take a lead and then later blew their lead en route to a third straight defeat.

Taking the mound for the Phillies was Ken Heintzelman, who pitched seven outstanding innings. The Yankees countered with Eddie Lopat.

Once again, the Yankees were the first to dent the scoreboard. Phil Rizzuto crossed the plate in the third inning on a Jerry Coleman single.

Coleman tried to reach second on the play but was tagged out to end the inning, with the Yankees up 1-0.

The Phillies would tie it up in the sixth inning when Dick Sisler's single to left field scored Del Ennis from second base. Granny Hamner scored the go-ahead run for the Phillies in the seventh inning when Mike Goliat hit a single to center field.

For the first time in the World Series, the Phillies had the lead. Hamner however would be one of the reasons the Yankees would come back.

Then he walked Yogi Berra. Then he walked Joe DiMaggio to load the bases. At this point manager Eddie Sawyer went to his bullpen and brought in Game One starter Jim Konstanty.

Konstanty would face pinch hitter Bobby Brown. Brown grounded to Hamner which should have ended the inning, but Hamner misplayed the ball.

The tying run had crossed the plate and the bases were still loaded. Konstanty got Johnny Mizeto foul out to end the inning on the next batter though, keeping the game tied at two runs apiece heading to the ninth inning.

Hamner did everything he could to get that run back, though, as he lead off for the Phillies in the ninth inning with a double to left center field. Andy Seminick put down a sacrifice bunt that moved Hamner to third base with one out.

After Mike Goliat was intentionally walked pinch hitter Dick Whitman, hitting for Konstanty, grounded into a fielder's choice. Hamner was out at home to keep the game tied.

The Phillies would leave two runners on base when the inning was over. Then the Yankees came to the plate.

Russ Meyer entered the game to pitch for the Phillies and it looked like things were set for another extra-inning game. Meyer recorded the first two outs on the first two batters and then ran into trouble.

Back-to-back two-out singles by Gene Woodling and Rizutto set up Coleman's game-winning base hit. The Yankees came from behind to take game three by a final score of 3-2.

The Yankees were now one game away from the inevitable sweep.