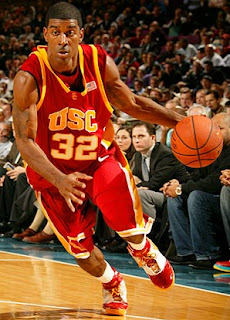 In a story that broke on Tuesday night, Louis Johnson, a former associate of Mayo, told reporters that Rodney Guillory informed him that Floyd had given Guillory "a grand."

Johnson has reported this activity to the NCAA, as well as federal investigates, claiming he saw the money in the envelope that Guillory received.

What is truly sad about this whole situation is I highly doubt anyone is surprised that something shady took place in the recruiting of O.J. Mayo.

This is not the first time USC has been accused of wrongdoing in its recruiting practices. Remember, the school is still under investigation for its actions when dealing with 2005 Heisman Trophy winner Reggie Bush.

Mayo was one of the hottest recruits coming out of college a few years ago, and his high school career was marred with tons of missteps. Any time a kid attends four separate high schools, chances are something is up.

To make matters stranger, Mayo reportedly contacted Floyd first and insisted he was ready to play for USC, which is the opposite of how the recruiting process should go down and would negate the need for Floyd to pay to bring Mayo to USC.

Perhaps the most important fact in this whole situation is, once again, USC finds itself under the microscope for recruiting and player violations.

At some point, enough has to be enough. The Trojans are obviously delving into shady tactics with their recruiting efforts in all their athletic programs.

What will it take for the NCAA to actually step in and say something, or are they too scared to touch the golden boy that is USC?