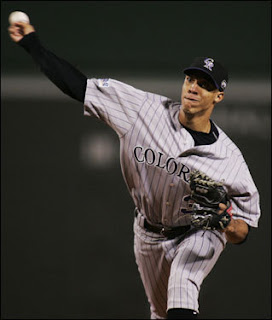 The Colorado Rockies have made a habit of struggling early.

For the third straight year, the club has stumbled out of the gate and looked like a team that was nowhere near finding their stride.

The Rockies were lucky to get out of April with an 8-12 record.

Despite playing the majority of the early games on the road, Colorado was intent on getting an early start this year.

Last year, a slow start plagued them down the stretch as they played over .500 in the last four months.

The effort of Ubaldo Jimenez cannot go without being mentioned. Jimenez, despite picking up his fourth loss, was very close to the form that he showed in Arizona during the opening series.

He went seven strong innings and was able to work out of jams. He walked two batters and hit another.

Unfortunately for Jimenez, all of the runs came on the free passes.

It seems like a common tale from the last few seasons early on. However, this one seems to have a different feel to it.

Tonight, despite being shut out by future Hall of Famer Randy Johnson through seven innings, the Rockies continued to fight.

Johnson was magnificent, not looking anywhere close to his 45 years of age. He struck out nine Rockies and scattered four hits across the seven frames, walking none.

In the past few years, there was no reason for a Colorado fan to stay tuned into the late-night ballgame. Once the Giants put their second run on the board in the third inning, the outcome would not be in doubt.

This season is different, however. Chris Iannetta came up to lead off the top of the eighth inning facing Bob Howry and launched a towering home run into the bleachers, a shot that is rarely seen in the thick night air of AT&T Park.

That got the Rockies on the board and the fight was on.

Two batters later Ian Stewart launched a pitch off of lefty Jeremy Affeldt. Almost any other ballpark would not have held the ball, but on Friday night it ended up as a double.

Dexter Fowler than blooped a ball into the outfield, and Matt Murton hit a ball deep into the hole for an infield single. Todd Helton's infield single plated Stewart and the Rockies were in business.

The effort came up short; however, the sting may not last as long. The club is showing that they believe in themselves and know that they can score runs.

In reality, they were one good swing away from taking a lead and possibly winning the first game in this series.

Logical teams to get the Rays SP, and the returns to get a deal done 📲