Boston sports fans have celebrated three Super Bowls wins, two World Series titles, one NBA Finals championship and a Stanley Cup since the start of the 21st century. That's an entire lifetime of sports memories in just a 13-year span.

"Rolling rallies" transporting Boston's sports heroes in a championship parade down Boylston St. in the famous duck boats have become an expectation, not a dream, over the last decade.

But none of those parades and championship triumphs, even the historic 2004 Red Sox World Series title that ended 86 years of heartbreak, made this Boston native more proud to be from this great American city than Wednesday's singing of our national anthem before the Bruins took on the rival Buffalo Sabres in front of a sellout crowd of 17,565.

It was the first sporting event in the city since the bombings at the finish line of the 117th Boston Marathon killed three people and injured over 150 others.

Following an emotional slideshow tribute set to Phillip Phillips' “Home" that honored the brave men and women who risked their lives to help and protect those affected by Monday's tragedy, as well as the three who lost their lives, TD Garden legend Rene Rancourt was welcomed to the ice along with the Boston Fire Department Honor Guard.

Rancourt has sung the anthem at Bruins games for over three decades and is a Boston favorite. After singing the first few verses of "The Star-Spangled Banner" in a softer, more emotional tone than we are used to hearing from him, Rancourt gave the floor to the Garden faithful, who finished the song as one united group.

The next tribute was for the brave first responders who ran into the chaos and risked their own lives and safety to come to the aid of people injured by the bombings. They were given a standing ovation and a thunderous cheer (video) during the team's 8-Spoked Salute, which honors veterans and those who serve the city and country at every home game.

All of the people in attendance who ran, volunteered or cheered on runners along the 26.2-mile course at the 117th Boston Marathon, or in any of the past races, were also asked to stand, leaving very few people sitting in their seats.

Boston Bruins forward Brad Marchand, who returned to the lineup on Wednesday after missing three games because of a concussion, tried to put the night's atmosphere into words.

"It was incredible. To see how everyone was reacting and watching that video was obviously very emotional for everyone.

"You really see why Boston is such a special city. How everyone has come together and really united through all this, and tonight is another example of it. You’re around thousands of people you don’t know, but it’s like we’re all one. It was special there tonight and very emotional."

"To hear the crowd singing like that is pretty special. It was great to see the support by the 18,000 or whatever here. It was definitely a different experience but great to see everyone rallying around each other, which doesn’t surprise you in this city."

As one of the oldest American cities, Boston is well-known for many things. It has a cherished history that dates back to the very beginning of the American Revolution, several of the most prestigious colleges and universities, world-renowned hospitals and, of course, great food.

But above all, Boston is a sports town.

This is one reason why Wednesday's Bruins game was the perfect place for the people of Boston to stand as one. In times of sadness and adversity, there is always a sports team for Bostonians to fixate their thoughts on. Sports tie us together, dominate our daily conversations and provide the necessary distraction from the normal stresses and worries of everyday life.

As Boston slowly returns to normalcy and starts to heal from the recent tragedy, sporting events will be a place for New Englanders to come together and share a common love for the Bruins, Red Sox, Celtics and Patriots.

"It meant to a lot of people as another step, and we’re just on the ice trying to have some remembrance from the last couple of days and also just move on as well to getting back to business in the city," said Bruins defenseman Andrew Ference after the game.

"They’re a pretty awesome crowd of people. I think no different than us, they knew it was a step for the city to get back to some sporting events. I think in that instance they’re not really cheering for us, they’re cheering for your city and I think for themselves as much as anything."

People need something to believe in, something to rally around after a horrific tragedy, and the Bruins are the perfect team for this city to get behind.

"The first thing you do is you want to help out; you want to do the best you can," said Boston Bruins head coach Claude Julien at Wednesday's morning skate. "We did that for Newtown; I’ll tell you what, there wasn’t a better feeling than going there and then trying to spread some joy and put smiles on some people’s faces.

"Our goal is to do the same thing here with this city and everyone that was involved in this tragedy. We’ve got a good group of guys here that we’re fortunate to have on our team that care a lot for what’s happened. There’s no doubt that it’s affected us individually, personally. Certainly would like to be a group that can do something that can really help this city get through it."

As a legitimate Stanley Cup contender, the Bruins will play a major role in lifting the city's spirit over the next few months. With the point earned from Wednesday's shootout loss, the Bruins secured a sixth straight postseason berth—impressive for a team that was in complete disarray after the 2004-05 NHL lockout.

When the postseason commences on April 30 and the excitement of playoff hockey returns to Boston, the Bruins will be among top favorites to win the Stanley Cup, which would be their second championship in three seasons.

While Wednesday's atmosphere at the Garden was special and unique, the strong emotions from the crowd and the electricity in the building will not subside in the near future.

"I think it’s going to continue," Marchand said. "With how everyone was tonight and the atmosphere, the way everyone came together, it’s not something you can let go of.

Regardless of the final score, there were no losers from Wednesday's Bruins game. Unlike a normal NHL matchup, the result of the game played on the ice wasn't important.

The memory of this game won't be of which team scored the most goals; it will be the statement of pride, patriotism, strength and resiliency made by the people of Boston.

As an exciting and likable group of guys who demonstrate the trademark toughness, resiliency and strength of Boston on the ice each game, the Bruins, along with the city's other sports teams, will play a large part in the city's recovery.

“The one thing that I sense from our team is that we have the ability to maybe help people heal and find some reason to smile again, by giving them that, by representing our city properly,” Julien said.

“To me, this is a time where you are proud to be associated with a professional team.”

Nicholas Goss is an NHL Lead Writer at Bleacher Report and a proud native of Boston. Follow him on Twitter. All quotes obtained firsthand. 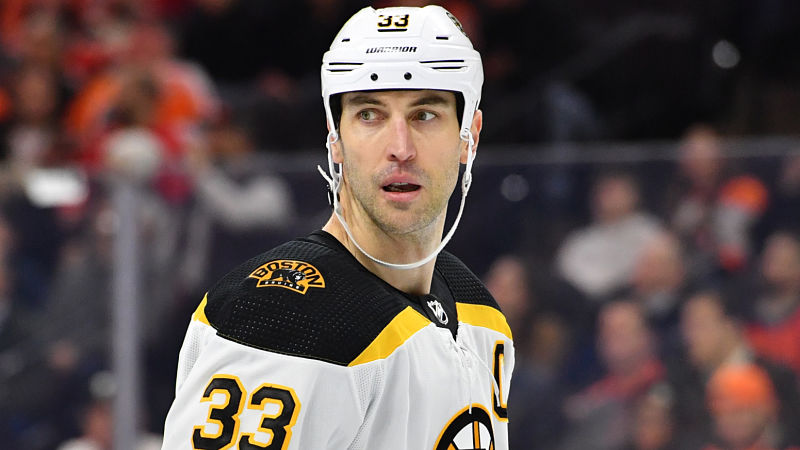 Zdeno Chara reaches out to Brendan Gallagher after nasty cross-check

Zdeno Chara reaches out to Brendan Gallagher after nasty cross-check