Given how poorly the Los Angeles Angels have been swinging the bats this season, there's been a lot of pressure on their starting pitchers to put up zeroes on a nightly basis.

Jered Weaver did exactly that on Wednesday night against the Minnesota Twins. When Torii Hunter squeezed the final out of the game in deep right field, the Twins had no runs, and no hits.

Weaver, in case you weren't watching, was quite brilliant. He threw first-pitch strikes to 19 of the 29 hitters he faced, and he showed off tremendous control of his breaking pitches all night long. As usual, his fastball command was excellent. He ended the night with nine strikeouts.

The Twins got one of their baserunners on one of those strikeouts, as Chris Parmelee advanced to first after whiffing in the top of the second, when Chris Iannetta had the would-be third strike go off his glove. For much of the game, that was what separated Weaver's ongoing no-no from an ongoing perfect game.

He put any and all perfecto controversy to rest when he walked Josh Willingham in the seventh. A minor annoyance was averted. 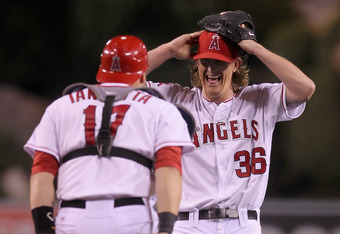 Weaver's no-no got a couple of late scares, one of which was a drive down the left-field line off the bat of Trevor Plouffe that went just foul. Alexi Casilla's fly ball to right for the last out looked like it had a chance, and it probably would have at least clanked off the wall on a warmer night.

But nope. Torii Hunter made the catch on the track, and this night was all Weaver's.

He got his fourth win of the year, his first no-hitter and the 10th no-hitter in franchise history. His comes less than a year after Ervin Santana pitched his in July 2011, and less than two weeks after Philip Humber's perfect game in Seattle.

Weaver has made six starts this season. He's allowed no runs in four of them. His ERA is down to 1.61, and he has 45 strikeouts in 44 2/3 innings pitched.

Want an example of an ace? There you go.

It suffices to say that Weaver's no-no is the brightest moment of the Angels' 2012 season thus far. It's not like it has much competition, of course, as their season has consisted mainly of frustrating losses and dinkers and ducksnorts to the left side of the field off the bat of Albert Pujols.

The Angels started May with an 8-15 record and are desperately in need of a pick-me-up.

Well, they've won their first two games of the new month, and Weaver went out to the mound and punched the negative buzz surrounding the Angels directly in the face. He took all the bad headlines away and replaced them with bold text that simply reads: I'm Awesome.

And then came the "I love you guys" moment, via Arash Markazi of ESPNLosAngeles.com:

Jered Weaver: "This is why I stayed here. For you guys."

Now this, my friends, is something the Angels can build on. What this team needed after its horrid April was a catalyst of some sort. A homer from Prince Albert would have done the trick, but the Angels have to be even happier with the no-no spun by their ace and early AL Cy Young contender.

I don't need to tell the Angels to get excited about this. They are.

All they need to do now is use this as an excuse to stay excited. Fully energized, this is a team that has the ability to cut into the Texas Rangers' lead in the AL West in a hurry. All it will take is continued brilliance by Weaver and the rest of L.A.'s starting staff and a little more offense than they've been getting so far.

And rest assured, that offense is coming, and a good chunk of it will come from the big guy at first base.

How Robo Umps Can Give MLB Its Credibility Back

Tech was behind the sign-stealing scandal, but now it has a chance to (maybe) save the day

How Robo Umps Can Give MLB Its Credibility Back

Cashman: We Knew About Astros

Cashman: We Knew About Astros

Each team's prospect that isn't living up to the hype