An old tradition in baseball is to have part of a song play while you step up to bat.  For this article, I chose the songs that match their player’s abilities.

I also included a link to Youtube so you can listen to the songs as you read.

Critic commentary: "Hopefully this classic about United Kingdom night prowlers by the late crooner will help Ibanez put some English on the ball." --Kenny Herzog, Editor-in-Chief

It sounds like Zevon is singing “Ra-uuuuuuuuuuuuuuuuuuullllllllllll!” when he howls.  When this song plays in the Safe, the fans really get into it.  Raul even has his own “people” who come with “Rauuuuuuul” written across their chests.

Critic commentary: "Incredible pick. This could only be made better if the former 33-year-old rookie grew a Billy Gibbons-style beard down to his waist. If you can't get your swagger on while walking up to the plate to 'La Grange,' you need to check your pulse." --Jim Welte, freelance music writer

A very weird song.  It is very cool, and it would be cool to hear while stepping up to bat.

A hard rock song that prepares you’re mean look to stare down the pitcher with.

This song is about Jim Edmonds’ position.  Not only that, but the lyrics go “Put me in coach, I’m ready to play, today.”  Being a back-up outfielder now, I’m sure he asks his coach to play every once in a while.

Critic commentary: "These songs largely sum up the chasm that will forever exist between Jeter and A-Rod. They are superstars born one year apart, they are paid boatloads of money to play for the most prestigious franchise in sports, but only one of them bumps MIMs as he's coming to the plate. Not hot." --Jim Welte, freelance music writer, Paste, Crawdaddy, and Jambase

This is A-Rod’s song.  He is hot, and you are not.  He represents New York; it says it on his back.  The song is about a too-rich show-off who writes a song about it, and A-Rod is a too-rich show-off.  I see the song fitting him well.

Critic commentary: "One hundred fifty-five stolen bases in three seasons undoubtedly gives you the right to do a little bragging; 'Figgy' is indeed speedin'." --Saul Austerlitz, freelance critic for Boston Globe and other publications

Figgins has speed, and this song is all about speed.

Critic commentary: "Jigga's snake-charmer horns are downright ridiculous. Can there be a better batting song than this?" --Saul Austerlitz, freelance critic for Boston Globe and other publications

Saul is right.  This song is really loud, a little obnoxious, and it wakes you up.

Critic commentary: "Presumably, the once unstoppably productive catcher is hoping this Kanye cut will catalyze his ability to hit more balls toward the far reaches of Dodger Stadium." --Kenny Herzog, Editor-in-Chief  http://www.youtube.com/watch?v=53NrAbjvL_4

This song is a very positive song.  It’s saying “before I die, I’m goin’ to touch the sky.”  Kanye West is really saying I want to reach the top, and sparkle.  The top is a great spot for Martin to aim for.

Critic commentary: "Opposing teams should definitely be scared of any leadoff hitter who comes to the plate with that kind of look in his eye, backed by a song whose title begins with 'The Revenge.'" --Kenny Herzog, Editor-in-Chief

I don’t have much to say.  The song really gets your attention.  A great song for a leadoff hitter.

Critic commentary: "Congrats, Justin. You won the Home Run Derby and you have good taste in music. Please stop being so perfect." -- Whitney Pastorek, Senior Writer

Big Gun is a great song for this slugger.

Drayer: Kikuchi and his slider impress in Mariners’ 6-2 win Drayer: Kikuchi and his slider impress in Mariners’ 6-2 win 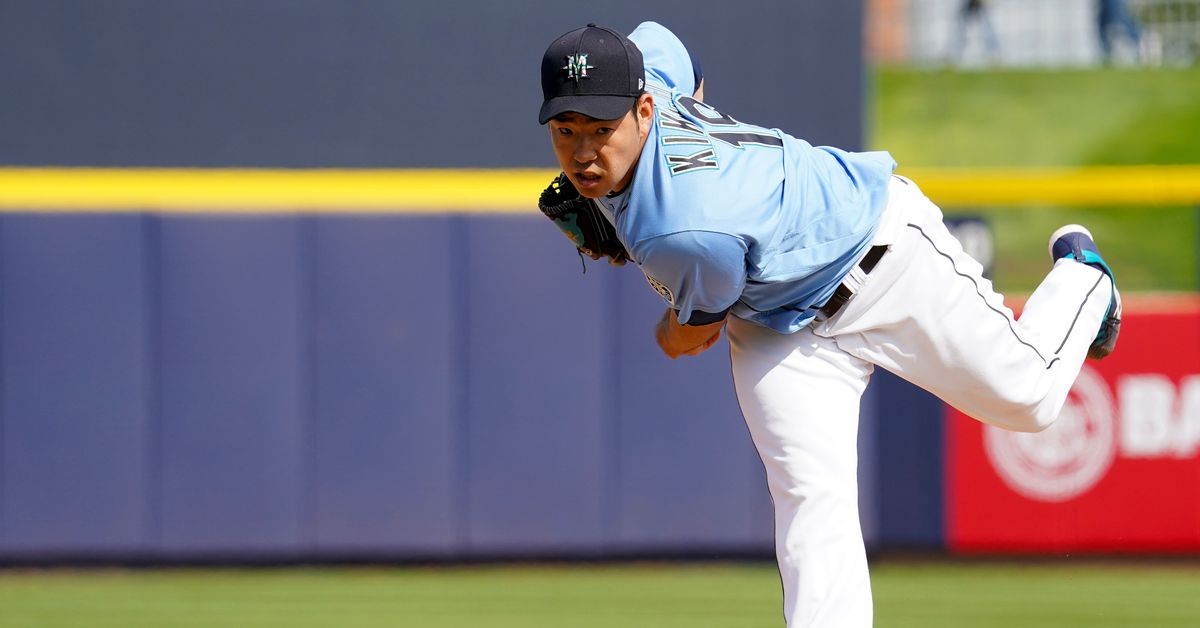