Was This Cincinnati Great Playing for the Wrong Franchise?Andy Lyons/Getty Images

"We are confident but not overconfident," Cincinnati Reds manager Pat Moran told reporters. "The record of the Reds speaks pretty well for itself."

George "Lucky" Whiteman, who played for the Boston Red Sox team that defeated the Chicago Cubs in the 1918 World Series, was certain that the Chicago White Sox would beat the Reds.

"I'll bet my money on the Sox," said Whiteman. "They're what we ball players call a 'money team.'"

No doubt about that.

Christy Mathewson, possibly the greatest pitcher in history, thought that the Reds had a great chance to win. He warned that it is not wise to rely too much on a single pitcher. Mathewson was referring to White Sox ace Ed Cicotte, who finished the 1919 season 29-7 with a 1.82 ERA.

Mathewson cited Grover Cleveland Alexander in the 1915 Series. The consensus was that, despite the fact the Red Sox were the better team, Alexander would lead the Philadelphia Phillies to the promised land. Boston beat the Phillies in five games despite Alexander's two great performances.

Mathewson said that the Reds were one of the best hitting teams he had seen in years. They were a team that could beat any type of pitcher. Matty believed that the Reds hitting could overcome any pitching shortcomings.

Umpire Billy Evans viewed the Reds differently. He believed that the Reds had better pitching than the the White Sox because, with the exceptions of Cicotte and Lefty Williams, the rest of the staff was erratic.

Pointing out that pitching is the key in a short nine-game series, Evans thought that the Reds' top four starters of Hod Eller, Jimmy Ring, Dutch Reuther and Slim Sallee would win it for the Reds.

How things have changed in almost 100 years. Evans said that it would be foolhardy for White Sox manager Kid Gleason to bring back either Cicotte or Williams on one day's rest. He pointed out that Dickie Kerr might make a difference although he lacked experience.

The "experts" who supposedly were in the know, the gamblers, bet on the White Sox, who were favored to a much greater degree than expected. Some found the high odds against the Reds shocking.

A New York Times story claimed that "the difference in the relative strengths of the two clubs, if there is a difference, is not so great as to warrant such odds being quoted."

The "Peerless Leader," Frank Chance, who managed the Chicago Cubs in four World Series, was noncommittal. Speaking to reporters, he said "It will be the biggest series ever played, and morale will win it one way or the other. There is more uproar over this series ... than I've seen in the twenty years I've been mixed up in baseball."

Reds skipper Pat Moran mentioned that stealing signs might determine the winner, but he said, it had to be "on the square." Just like the Series, Mr. Moran?

"By on the square, I mean the ability of one club to discover the signal code of the other without resort to any underhanded trickery."

Moran didn't have to worry about the White Sox stealing signs. 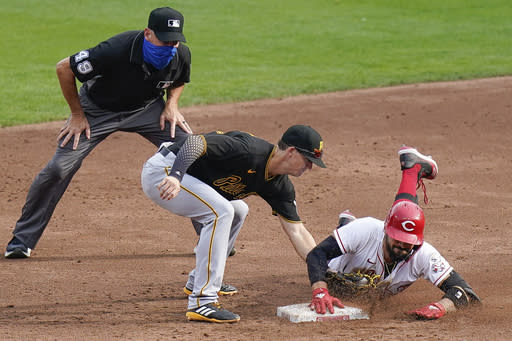