NASCAR Sprint Cup: 7 Things We Learned from the Weekend's Race at Michigan 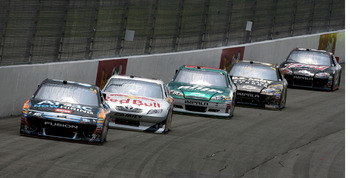 Through a process of short-pitting, gambling for a bit of track position and taking major swings at a car's set-up, many NASCAR Sprint Cup teams had their hands full in Sunday's Heluva Good! Sour Cream Dips 400 at Michigan International Speedway.

As the laps winded down, teams gambled with fuel mileage, leaving many of the leaders to believe they may not have enough fuel to make it to the checkered flag without having to pit again. That, of course, was until a caution came out, giving teams the chance to pit.

This gave a chance for the race to come down to who had the best car.

All race long, the Fords were near the front, if not leading. Surely one would take the win, right?

But it was Toyota who came away with the top honors, as Kyle Busch, driver of the No. 18 Snickers car, led many laps while fighting chest pains and illness before finishing third for the second week in a row.

Finally, Denny Hamlin, driver of the No. 11 FedEx Office Toyota, came home with the win.

We saw many factors playing in and out of the race. Let's see the seven things we've captured from this weekend's race at Michigan.

7. Consistency Is What Matters Most 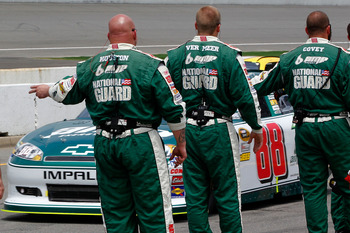 To be in the Chase, you can't have the winning car some weekends and slide into Victory Lane every now and then, while some weekends you take a fall for a bad pit stop or impact to the wall.

You have to be consistent.

One driver showing the most consistency right now is Dale Earnhardt Jr. Although he doesn't have any wins so far this season, he's still sitting third in the points standings.

Not saying the No. 88 team doesn't have its troubles though. In this weekend's race when Earnhardt Jr got caught into the wall with his teammate, Mark Martin. Laps later, he had a tire go down, resulting in a late-race pit stop. Though, even with problems, the team's finishes remain in a consistent pattern and leave him high in the points standings.

But for drivers like Brad Keselowski, he still finds himself not in a position to grab a place in the Chase by wins—even with a win. With weeks on the map and weeks where the team can't seem to come out strong, the team is trying their hardest to find the consistency it needs to battle their way into the Chase.

So while wins may be on the top of a driver's list, when they get into the car, steady Top 5 and Top 10 finishes are an easy way to guarantee yourself a good place in the points' standings.

6. Fans Are Fed Up with Commercials 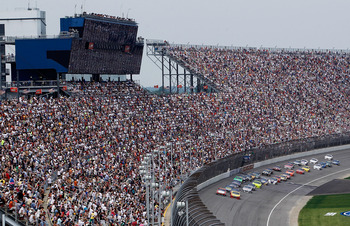 While this may not be an on-track issue, it was a major issue during the Michigan race and was truly brought to the attention of NASCAR by many fans.

Heading into the summer season, TNT takes over coverage of the NASCAR Sprint Cup races. The first part of the season is held by FOX, and the final part is shown by ESPN on ABC.

There were few complaints by viewers throughout the first part of the NASCAR Sprint Cup season, but during this weekend's race it seemed as though every five to ten laps there was a commercial break, followed by even two or three during many of the cautions.

How many times do we need to be reminded to ask our doctor about our issues with uric acid or hear about a new form of super glue?

The fans have spoken. But what they want TNT just can't seem to give. 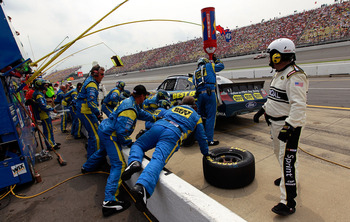 We see it now and then where a bad pit stop really kills a driver's race.

But this weekend we saw multiple drivers being put far back in the field due to a bad pit stop. It almost made them unable to even compete for a good finish.

Drivers take a lot of the blow for bad finishes, but there are some teams who are laying much of the responsibility on crew guys who have slip-ups and mishaps.

But do remember, getting on and off pit road is also a part of what happens in a pit stop. Come in too short, and it will cost seconds, speed and a lap.

If there was any time to practice pit stops, it is now. With the competition so stiff on the track, it's time to learn to make up spots on pit road.

Could we see another "Chad Knaus" move sometime later in the season? Or maybe teams practicing for more and more efficient stops?

It's clear that teams are gambling for any chances they have. What better place to do it than in the pits, where the bittiest of seconds matter?

4. Gas Mileage Is Always on the Mind 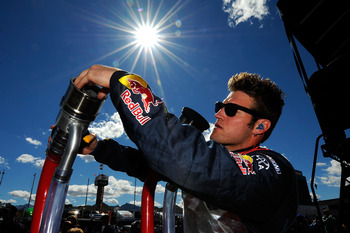 No matter what track you go to, teams keep gas mileage and gas-saving techniques in the back of their heads.

Many of these past few races have come down to who topped-off with enough to finish or who simply saved enough under caution to keep track position.

The fuel mileage of the people in front of and behind them is also something each team thinks about in final restarts when drivers are on the edge of not making it.

We saw it this weekend, until the late caution gave everyone a chance to top-off. No matter who leads the first hundred laps, someone who drove in a safe place and coasted just enough to get that last bit could always win.

3. Dodge Has Caught Up 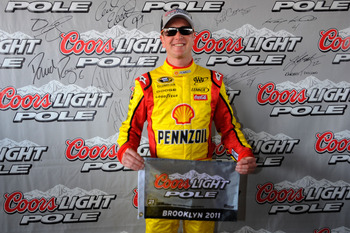 We've seen it occur in the past few weeks. It has finally set in that Dodge may have caught up to the rest of the field.

In previous races and earlier this season, Dodge seemed to struggle to keep up with the other manufacturers. But after recently capturing four poles in a row and multiple strong finishes, including one win, it has become obvious that the Dodge power is there and will be there heading all the way to the Chase.

Penske Dodge drivers Keselowski and Kurt Busch (and the crews that back them) both contribute to the success of their team.

Could Dodge be one to contend for the Championship? Busch is the highest-standing driver for Dodge, as he sits seventh in the points. With another win or so, Keselowski could make it into the Top 20 in points and guarantee himself a "wildcard" spot in the Chase. 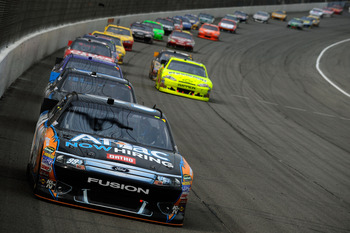 Yet again, the Fords are what everyone wants to beat. While NASCAR insists there is only a one-horsepower difference in all four manufacturers' engines, the drivers say otherwise.

Look at Lap 146 in this weekend's race. Four Fords in the Top Six on just that lap alone.

They took home second and fourth at Michigan after leading multiple laps and looking strong all day.

Carl Edwards, driver of the No. 99 Aflac Ford, currently leads the points standings and never seems to let up.

Teams are looking for answers, but the results say it all: Ford is the dominant manufacturer, and the others are just trying their best to keep up.

1. Jimmie Really Wants His Horseshoe Back 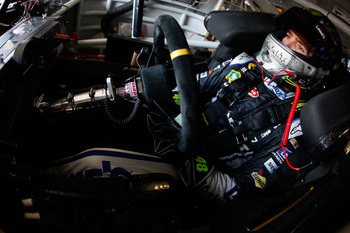 Many, including Kevin Harvick, joked that Jimmie Johnson and the No. 48 team had a "golden horseshoe."

After multiple wins by Harvick, Johnson's team began to plead for their "horseshoe" back. He may want to begin to beg.

Only laps into the race, Jimmie Johnson brought out the caution. Following that he had to go a lap down, and then another, to repair the sway bar on his No. 48 car.

He would finally finish 27th and only one lap down, but it still brought a beating to the team's point standing.

How many times do you see the five-time Champion take a spin and spend the rest of the race struggling for track position?

Johnson dropped three spots in the points' standings after today's race alone. While it won't be very hard for his team to climb back, it sure does look like their horseshoe has gone missing for good.

But we can never doubt that Johnson and his crew chief, Chad Knaus, will surprise everyone and end up back on top by the start of the Chase as they try for a "six-pack" this year.