2011 Stanley Cup: The 5 Most Important Players in the Boston Bruins' Title Run 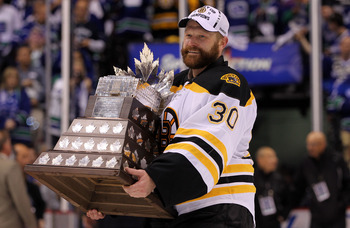 The Boston Bruins are the 2011 Stanley Cup champions after defeating the Vancouver Canucks in an exciting seven-game series.

In every title run, in any sport, there are players who take their talents to another level and perform to the best of their ability to help their team win it all.

For the Bruins, there are several players who took their game to a new level and were instrumental in bringing the city of Boston its first Stanley Cup in 39 years.

From goalie Tim Thomas to captain and top defenseman Zdeno Chara, the Bruins received important contributions from nearly every player on the roster on their way to winning the Cup.

Let's look at the five players who had the biggest impact on the Bruins run to the 2011 Stanley Cup title, starting with Brad Marchand.

Nicholas Goss is a Boston Bruins featured columnist for Bleacher Report and was the organization's on-site reporter for the Stanley Cup Finals in Boston. Follow him on Twitter for Bruins playoff news and analysis. 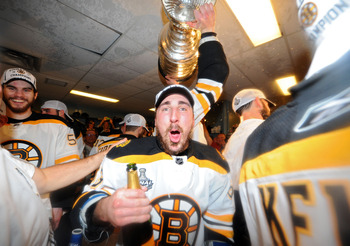 Boston rookie forward Brad Marchand was supposed to be merely a role player for the 2011 Bruins, but he quickly established himself as a top-six forward.

His pest-like play and his ability to get under opponents' skin sometimes overshadows his great offensive skills.

Marchand scored 11 goals in the 2011 NHL playoffs, with five of them coming in the Stanley Cup Finals versus the Canucks.

He had two goals and one assist in the Game 7 clincher of the Cup Finals and was a consistent performer all year alongside linemates Mark Recchi and Patrice Bergeron.

Marchand is a terrific young player and will be an important part of the Bruins success for many years to come. 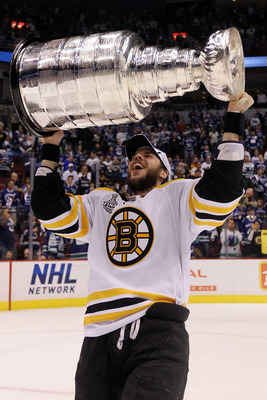 David Krejci is the playmaker of the Boston Bruins, and without him there would be no Stanley Cup celebration.

His importance to the Bruins was felt last postseason when he got injured during the Flyers series and missed the rest of the playoffs. The Bruins then lost the next four games and were eliminated.

Krejci is a brilliant passer and also has a good shot. He's not a bad defensive forward either, and he sees the ice as well as any player in the NHL.

Krejci led the NHL playoffs with 12 goals scored and 23 points. He was the center of the top line and set up linemates Milan Lucic and Nathan Horton all regular season and playoffs. 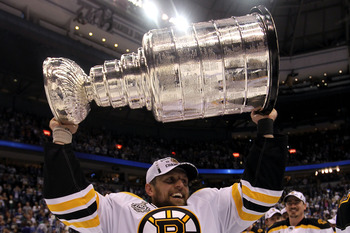 Bruins defenseman Dennis Seidenberg did an outstanding job shutting down the NHL’s top goal scorers throughout the playoffs alongside defensive partner Zdeno Chara.

Seidenberg is a physical defenseman who can shut down anyone on defense and can also play on the power play.

He often led the Bruins in ice time during the regular season and playoffs, and is the most underrated and under-appreciated player on the entire Bruins roster.

His defense and aggressive play were key reasons why the Bruins are Stanley Cup champions. 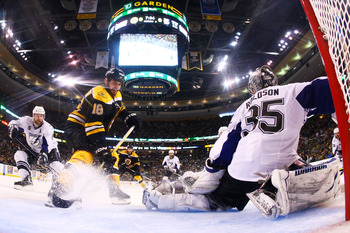 Bruins forward Nathan Horton had never played in the NHL playoffs before coming to Boston in an offseason trade with the Florida Panthers.

Horton was tremendous all postseason for Boston, scoring the overtime winning goals in Games 5 and 7 of the first-round series with the Montreal Canadiens, and the winning goal in a 1-0 victory in Game 7 of the Eastern Conference Finals against the Tampa Bay Lightning.

Horton was knocked out of the Stanley Cup Finals in Game 3 when defenseman Aaron Rome hit him in the head with a vicious cheap shot. Rome was suspended for the series and Horton was unable to return due to a severe concussion.

Horton’s clutch scoring was one of the biggest reasons the Bruins made the Cup Finals, and nearly all his teammates have said in the last week or so that he’s one of the nicest guys that they’ve ever met. 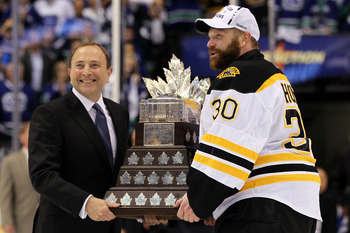 Boston Bruins goaltender Tim Thomas had one of the best seasons ever by a goalie in 2011.

He is a candidate for the Vezina Trophy this year, an award given to the most outstanding goaltender in the NHL. He won the Vezina in 2009.

Thomas also won the Conn Smythe Trophy as the MVP of the 2011 Stanley Cup playoffs.

Thomas's play saved the Bruins so much this season as he recorded many shutouts and made some historic and unbelievable saves in the playoffs.

Here are some of his accomplishments during the 2010-11 season:

Thomas was the Bruins MVP the entire season and came up big when the Bruins needed him most.

He has become a sports legend in Boston, which is not easy to do given the city's rich sports history, and his 2011 season will go down in the history books as one of the best ever for a goaltender in NHL history.