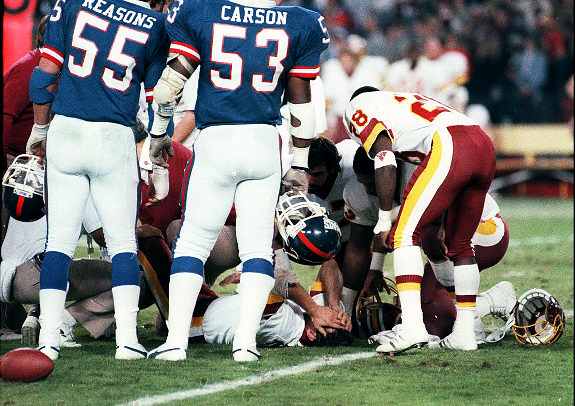 When you have 22 NFL players on the football field that continue to get bigger, stronger and faster, you are going to have some amazing collisions. The human body was not designed to take on these kind of violent collisions, and as a result, some rather gruesome injuries can occur.

We are going to take a walk down memory lane and provide you with some footage of these collisions. Might not be the best idea to watch this if you have just finished off a big meal.

You will find 20 gruesome injury slides, along with some links to other gruesome injuries of the collegiate variety. Please note, that this is not the kind of article that squeamish people or kids should see. You have been duly warned. 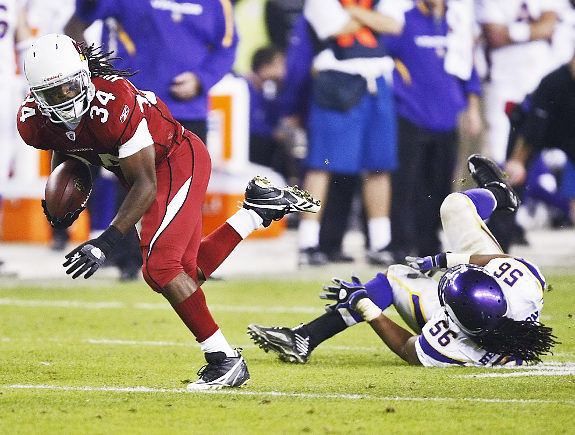 Minnesota Vikings linebacker E.J. Henderson tried to bring down Tim Hightower of the Arizona Cardinals. If it looks like his left leg is bent at an awkward angle, it is because he has just fractured the femur of his left leg.

Thanks to the NYDailyNews.com for running a story on the most gruesome injuries in sports. While their article covers all major sports, we are focused here on the NFL.

That article is not for the faint of heart, either.

In a game against the Jacksonville Jaguars, Buffalo Bills guard Eric Wood had his leg fractured when a Jaguars player landed on it, and Wood had no chance to react.

He recovered from this to play the entire 2010 season, a testament to how tough Eric Wood is.

Ronnie Lott breaking a finger in and of itself is probably not that gruesome an injury. But when you decide to chop off your own finger because it is prohibiting you from playing your game, that is officially the point in time when your finger injury is now considered gruesome.

Ronnie Lott, we have mad respect for you and your game.

From the article we sighted earlier by the NYDailyNews.com, we find another little gem.

Washington was playing for the New York Jets and broke the leg in a game against the Oakland Raiders. After the game, some of the Jets shared the following comments.

"I could see blood spurting out. I've never seen anything like that before."

Washington fractured his right fibula on his first carry, and his season ended right then and there.

As somebody who has received two broken arms from sports and one broken ankle, I feel for players when I see these things happen. When the bone pierces the skin, that is at a different level than what I experienced.

Napolean McCallum of the Oakland Raiders was running the ball against the San Francisco 49ers when his leg and knee were bent in a gruesome angle.

They had to airlift McCallum out of the stadium to save his leg.

For a video clip of the play, here you go, but once again, this is not for the faint of heart.

In the final play of wide receiver Darryl Stingley's career, he is hit hard by Jack Tatum, resulting in paralysis.

It was a preseason game by the way, so anybody who tries to make light of preseason games can counter that stuff like this happens in the preseason, too.

Sorry, about the music on the video, but this was the best video I could find to share.

This play happened in 1978. Since then, both players involved have passed away.

Junior Seau suffered a very gruesome broken arm in a game against the Chicago Bears. This happened while Seau was a member of the New England Patriots in 2006.

Tim Krumrie of the Cincinnati Bengals suffered a broken leg in Super Bowl XXIII against the San Francisco 49ers, so being hurt in front of a national TV audience makes it more memorable.

It is hard to find video footage of the play, since the NFL has removed most videos of the play. Thanks to manlyweb.com for providing the following description and photos of the play. 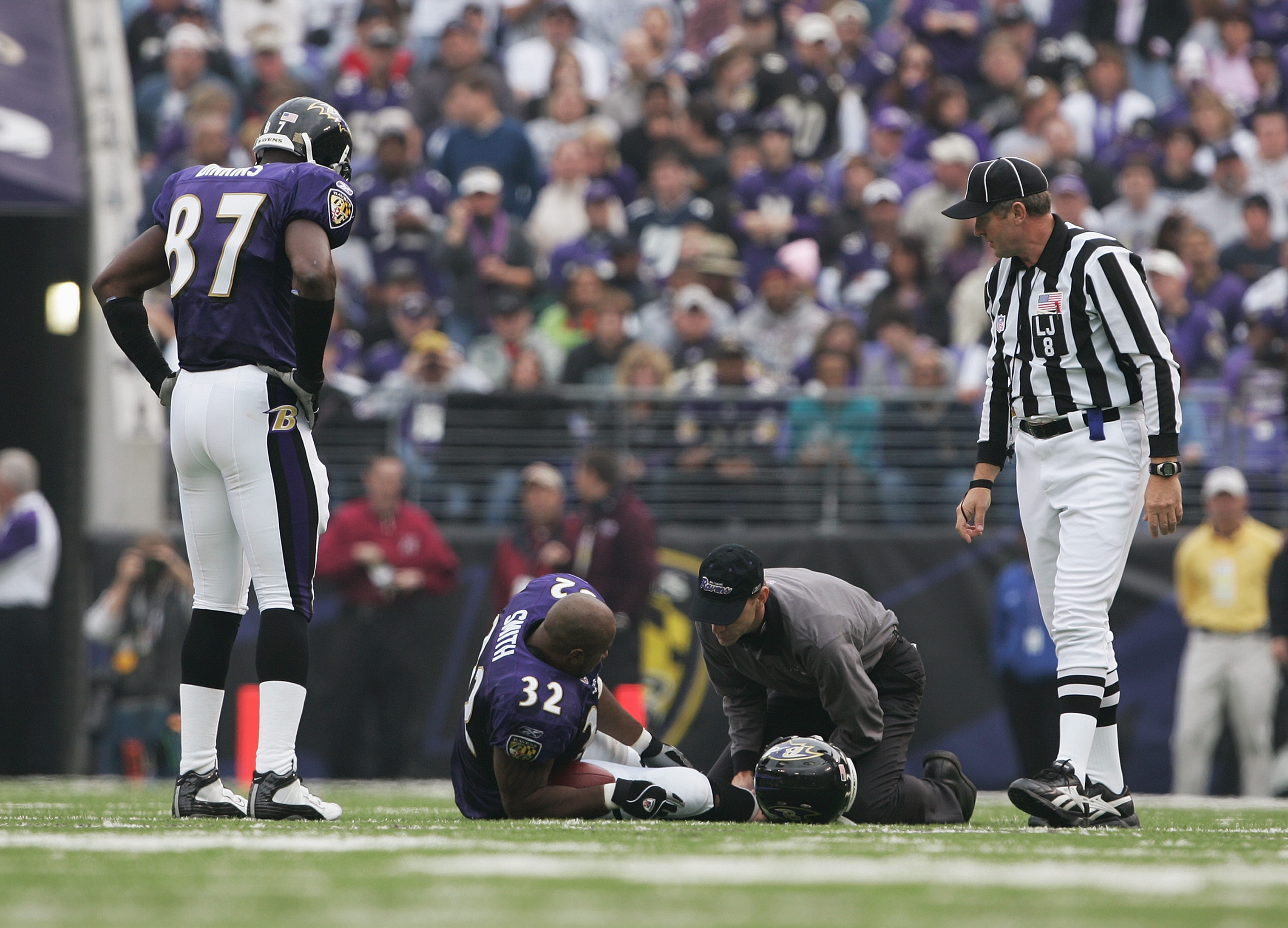 In a game in 2004 against the Dallas Cowboys, Musa Smith was horse-collared by Roy Williams.

The Baltimore Ravens running back suffered a compound fracture of his leg as a result of the tackle by Williams. This is one of the plays that led to the recent rule change where horse-collar tackles result in a penalty.

The injury cost Smith two years of his career before he came back to the Ravens. 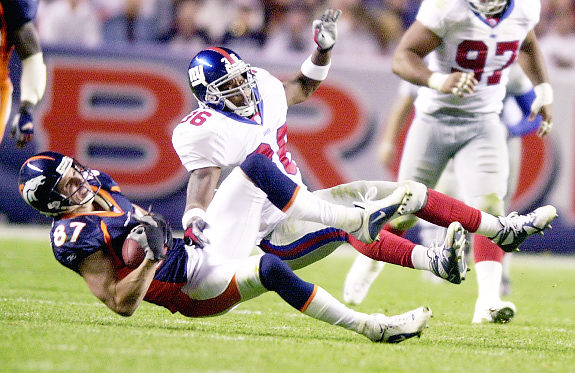 There was an article done by Bleacher Report Senior Writer Todd Kaufmann in 2010 that looked at 10 NFL gruesome injuries. Unfortunately, most of the video clips for these injuries have been removed by the NFL due to copyright issues.

Rather than duplicate Todd's list, you can see a blurb on the injuries to the following NFL players:

Charles Gordon, of the Minnesota Vikings is attempting to return a punt against the Green Bay Packers when he is tackled awkwardly and suffers a gruesome injury of his own. 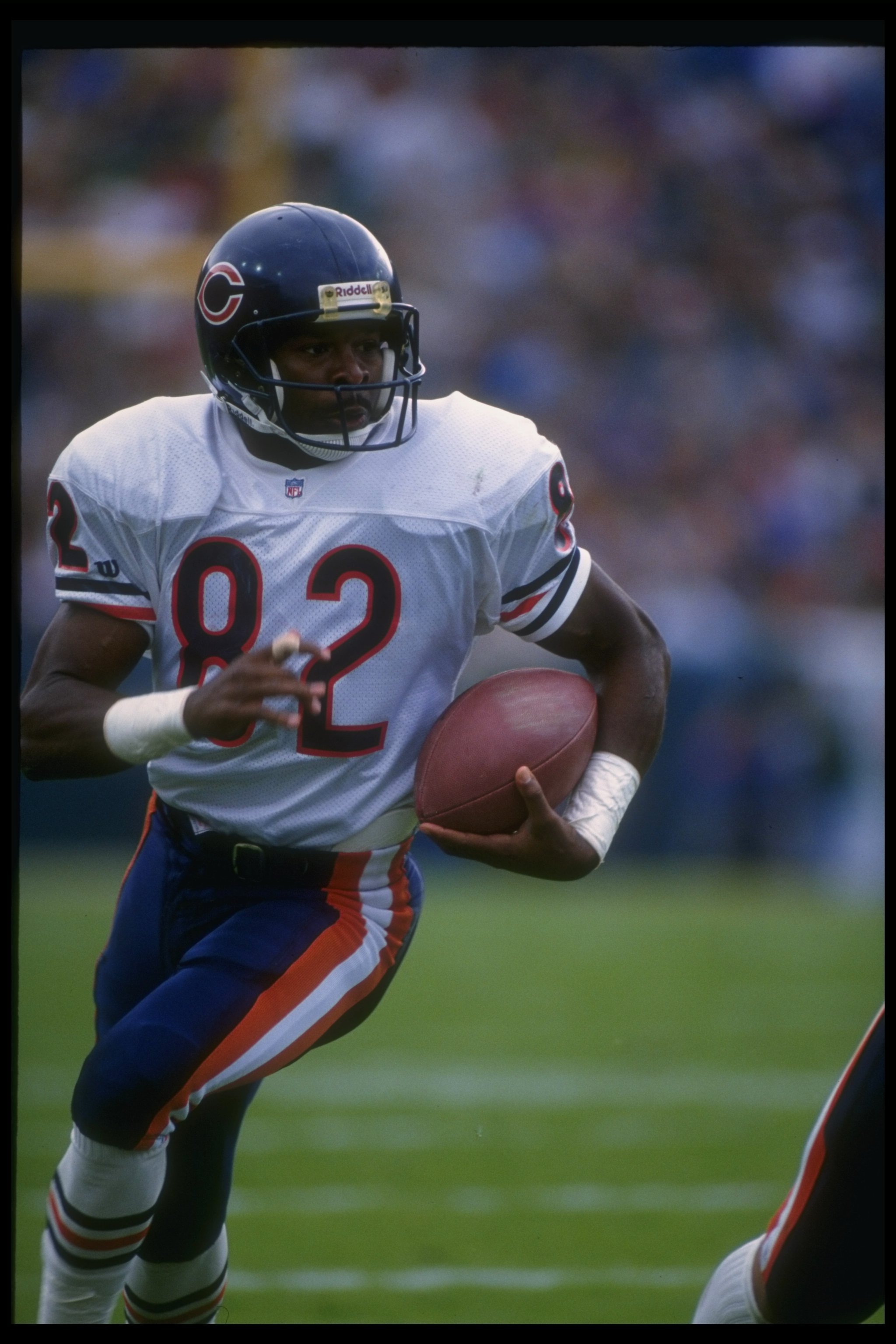 In an article by Pete Simpkinson of USA Today in 2003, he wrote about the costliest knee injuries of all time.

Since we can't locate any current video of the play, you will have to take our word that the play where Chicago Bears wide receiver Wendell Davis had both of his ACLs destroyed due to the poor turf at Veterans Stadium in Philadelphia was a gruesome injury. 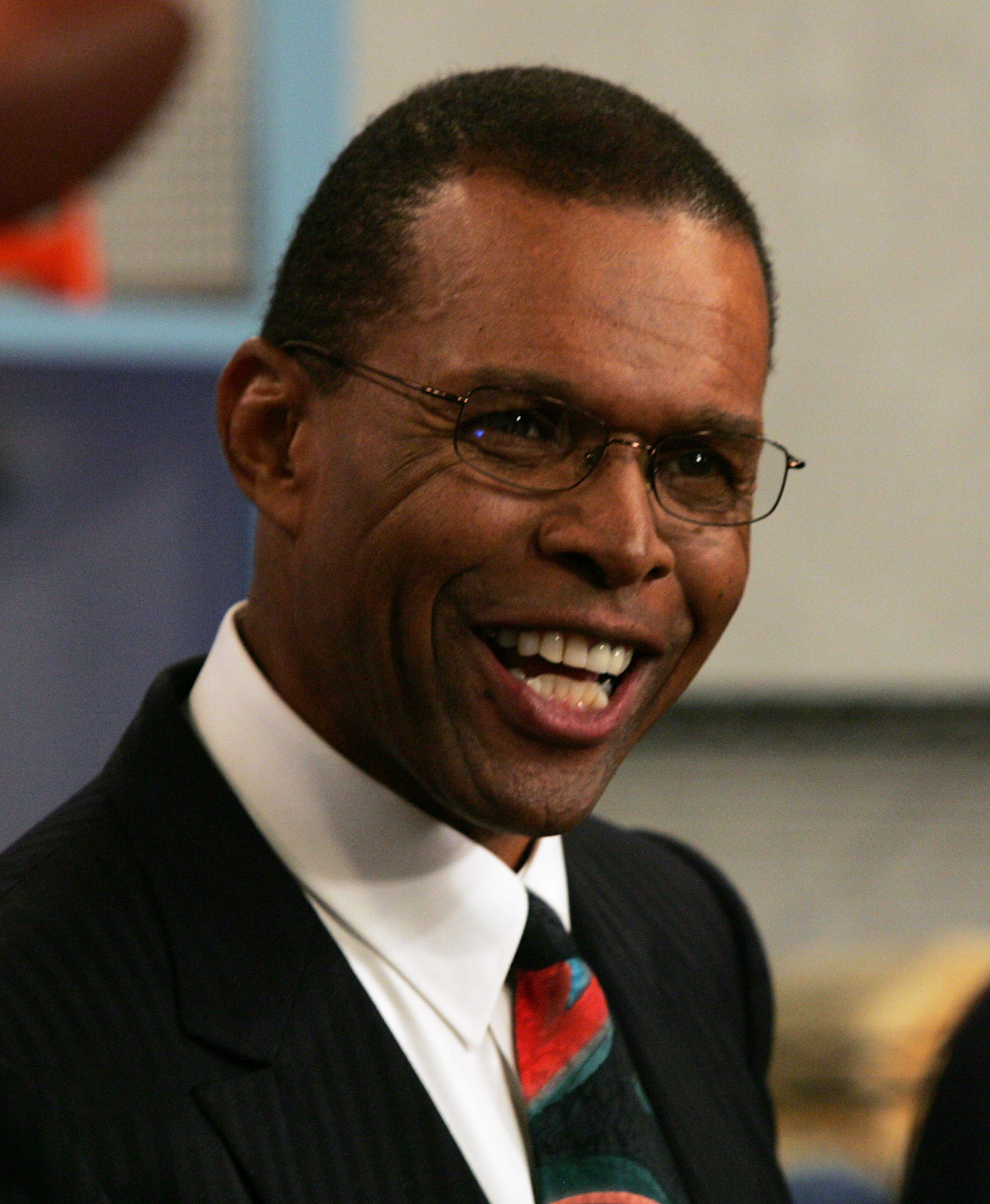 Gale Sayers' brilliant career took a turn for the worse when he suffered a bad knee injury that resulted in many torn knee ligaments. The game was in 1968 against the San Francisco 49ers.

Sayers hurt the other knee in 1970 and retired from the NFL in the following year. 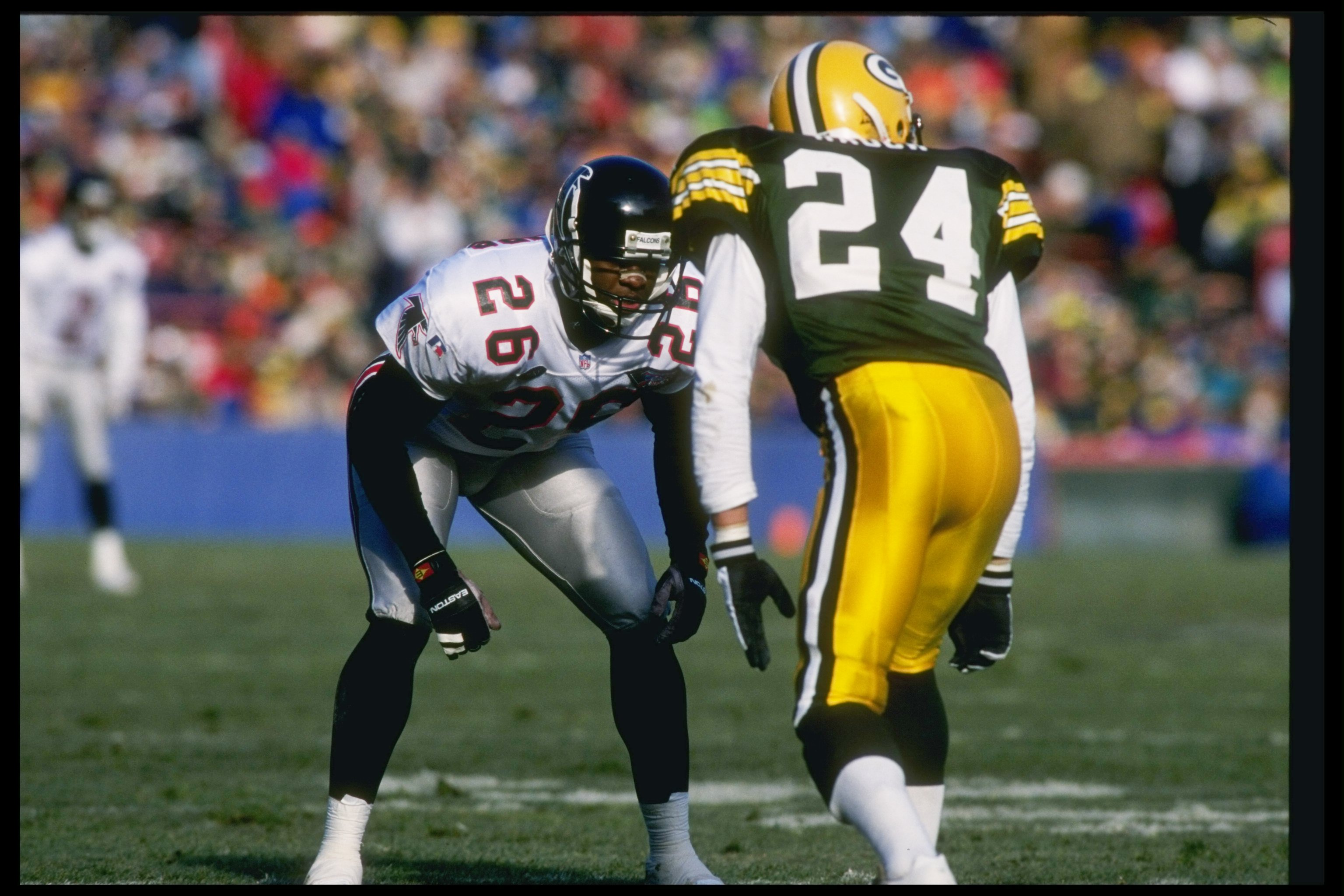 Jim Kelly of the Buffalo Bills had just thrown an interception to the Atlanta Falcons corner Anthony Phillips. Kelly was upset at himself, so he took his anger out on Phillips.

The ensuing tackle resulted in a badly broken leg for Phillips that dangled in front of him while he was trying to run on it. Maybe it is a good thing that we can't find any video of this play. 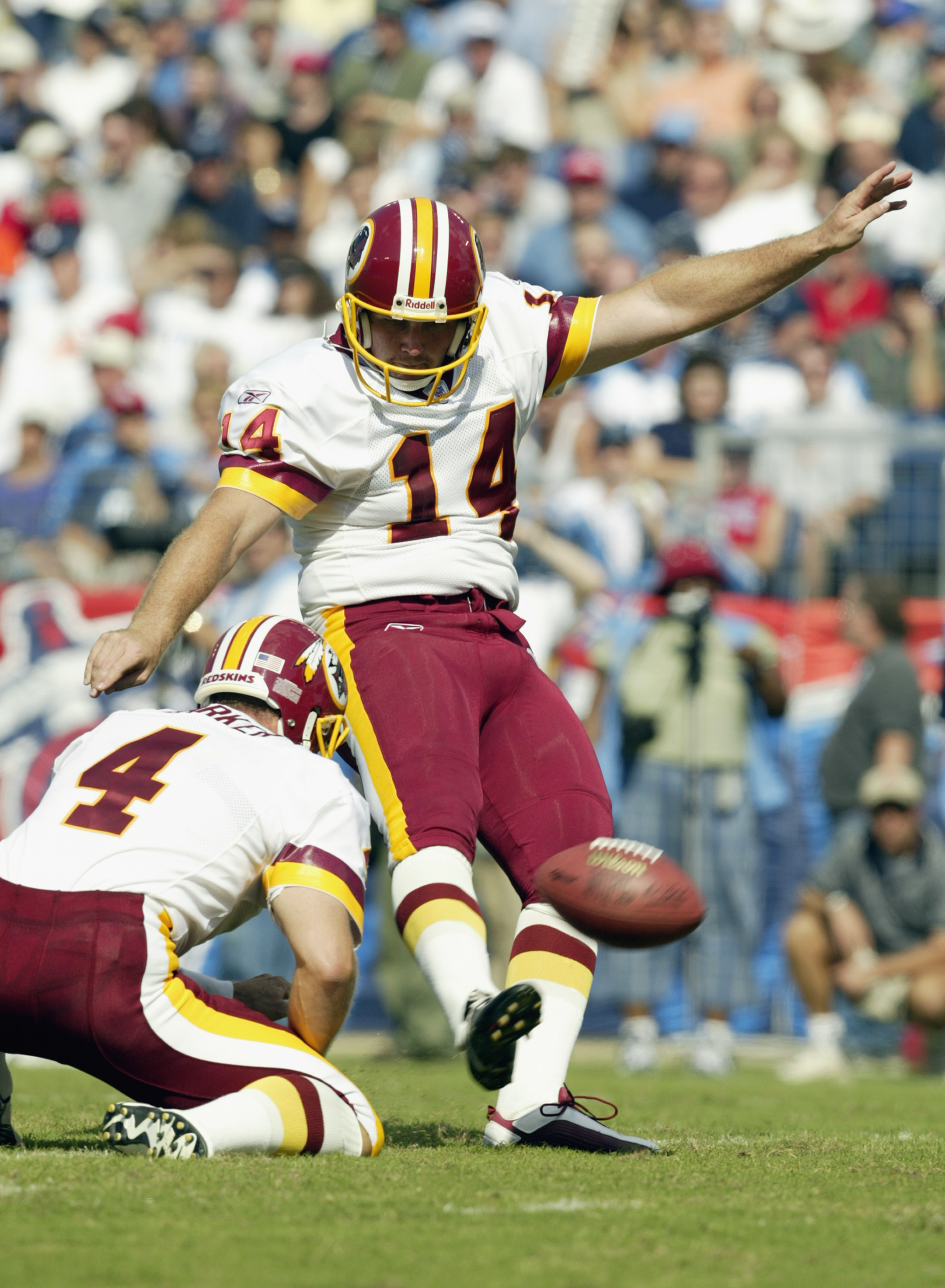 Bryan Barker was punting for the Washington Redskins on a Thanksgiving Day game against the Dallas Cowboys when he took a knee to the face.

The helmet that he wore left his nose exposed, and he took a knee to the nose that resulted in a very mangled nose. Barker was a bloody mess, so hopefully everyone did not just finish their big turkey dinner. 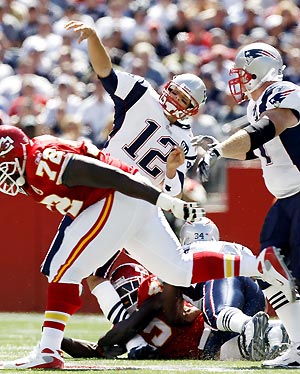 Tom Brady was getting ready to throw a pass for the New England Patriots against the Kansas City Chiefs when he found himself in a precarious position. Two Chiefs players were simultaneously hitting Brady, and the end result was a gruesome torn ACL.

Brady missed the rest of the year, but the Patriots were able to survive due to the play of backup Matt Cassel. 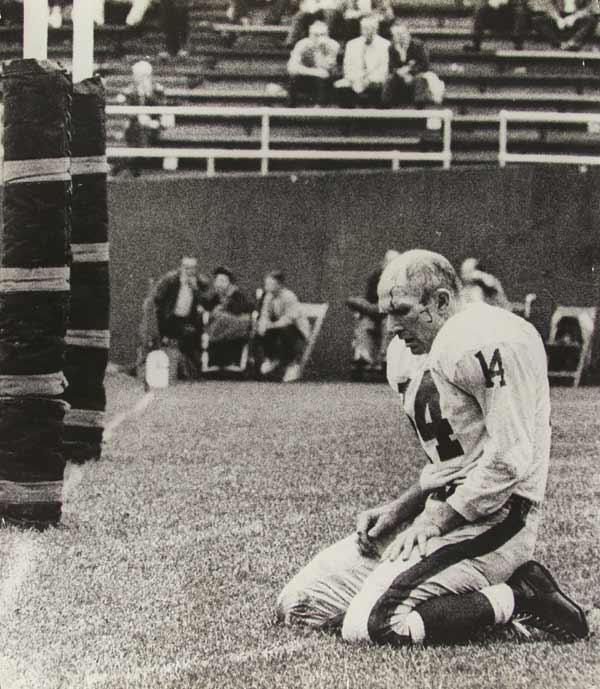 The classic shot of yesteryear, 1964 to be exact. New York Giants quarterback Y.A. Tittle kneeling down on the ground, his face a bloody mess after being knocked silly due to a concussion.

Tittle not only suffered a concussion, but he might have taken some damage to his ribs as well in this game. 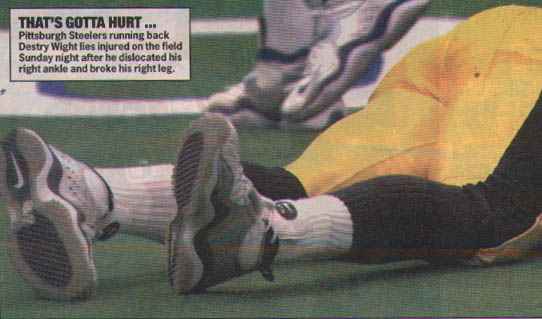 Thanks again to manlyweb.com for this article that shows this wild photo of Pittsburgh Steelers Destry Wright, who is obviously laying there in pain, as one foot points up while the other foot points down.

If you were asking yourself, what's wrong with this picture? Now, you know the answer. 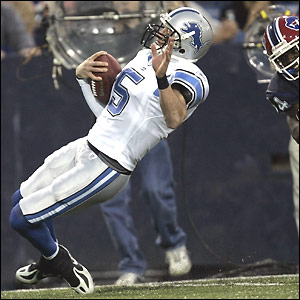 Another preseason game picture to share, another broken leg. Who says the preseason games are meaningless? Don't ask that to Jeff Garcia, who caught his foot in the turf and broke his leg on this run against the Buffalo Bills.

Garcia was the quarterback of the Detroit Lions at the time.

By the way, if you just really get into watching this stuff, the guys at manlyweb.com, have also included a number of college injuries that include some clips that we are not including in this article. Here you go.

As Keith Jackson used to say: " The grand daddy of them all." Joe Theismann's injury has to go down as the most gruesome injury of NFL history.

The Washington Redskins quarterback was sacked by Lawrence Taylor. The announcers seemed to be numb initially to the fact that Theismann was really hurt badly. 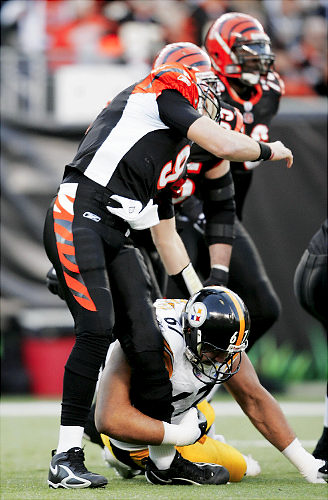 Any time a star quarterback is hurt in a game, it is a significant story. When it happens in a playoff game, it makes it more memorable.

Such is the case for Carson Palmer, who took severe knee ligament damage from this hit from the Pittsburgh Steelers' Kimo von Oelhoffen, forcing Palmer out of the game.