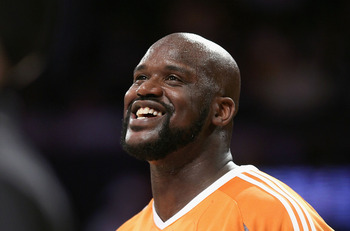 What does Charles Barkley think about his good friend Shaquille O'Neal?  Wednesday night on NBA TV, Barkley called him the No. 3 center ever.  Saying he was behind only Wilt Chamberlain and Bill Russell, Barkley labeled Shaquille as a giant.

O'Neal is a man who has a lot of cake—cheddar, cash flow, greenbacks, money—to spend during his retirement, and he'll have a lot of time to play and get more.

He'll probably get a job on television and continue to make the NBA the fun league of America.  The dominance of Shaquille O'Neal—an American success story—was something to tell your kids about...if they like basketball.

He was bigger than basketball—almost bigger than life—a three-time world champion and a man of many nicknames.  Which one of his almost mythical monikers, though, ranks No. 1 on Lake's list?  You're in luck.  Roll the tape to find out... 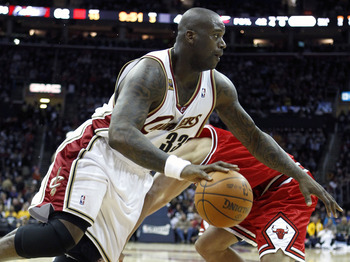 One of the most dominant and athletic centers in basketball history, he was like Darryl "Chocolate Thunder" Dawkins and Wilt Chamberlain mixed into one: Chocolate Chamberneezy.

In his prime, Shaq was the rib of the league—the lean and mean face of the NBA.  These days he's the chubby, chubby Shaq.  It's most definitely time to go.  He has enough cake. 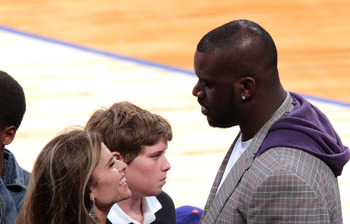 "Shaq Daddy" is one of his many nicknames carrying hip-hop connotations—O'Neal is mild hip-hop through and through.  As a pro rapper, he's not as lyrical as some of the other microphone checkers, but he could hold his own.

One of his friends was Brooklyn's Notorious B.I.G.  O'Neal was in L.A. dressed and ready to go to a party to meet up with Biggie before he was murdered—according to Shaq.

Biggie's mentor—Sean "Puff Daddy" Combs—was one of the more prominent "Daddy" dudes in the industry.  Shaq could be his own industry in the wake of the 19-year run he pulled off in the NBA.

He is not one of the best dressers in the league, though.  Looking at this picture of Shaq and the Terminator's ex and son, I'm sure you agree. 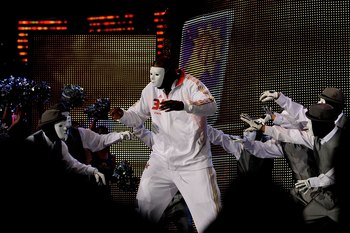 Thunder-hacking dunks—Shaq has them—but he can also dance in the lane and on stage.  Oh, he does it big on the stage.  You'll see what I mean.  Just keep advancing slides.

Shaq can do the electric slide, the pop and lock, the moonwalk, the Michael Jackson and the robot in the same routine...while he's rapping with one arm tied behind his back.

He led the Lakers to the NBA's Big Dance three boogies in a row. 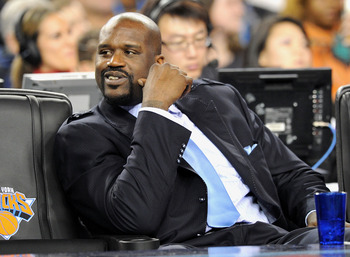 After leaving early to enter the draft, Shaq boogied back to LSU and graduated—calling himself "The Big Aristotle."  What he did off the court for NBA players was show them how to think outside of the low blocks.

I mean, how to get their money—their cake—so they won't end up broke. 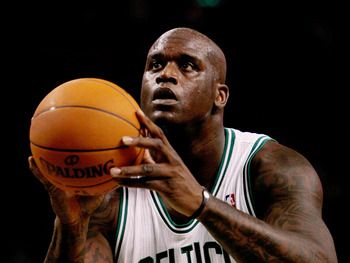 "The Big Shamrock" was thought up by Shaq—the NBA's resident entertainer for years.

He didn't bring the luck of the Irish to the Celtics, but he was the biggest leprechaun in NBA history.  Bill Russell—according to Russell—thinks the world of big Shaq.

There's not a bigger man in NBA history to have expouse wonderful thoughts about you than Mr. Russell. 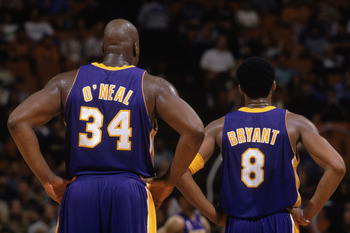 David Stern also had kind words to say about Shaq last night on NBA TV.  Stern wants to keep him involved in the game, I'm sure.

Maybe O'Neal will end up on the league's television station.  According to NBA TV's Dennis Scott, Shaq rides around in an RV in Orlando called "Wilt Chamberneezy."

Sounds like I should say "bless you," but the Diesel's wealth—his cake—is nothing to sneeze at.  Just ask the ladies. 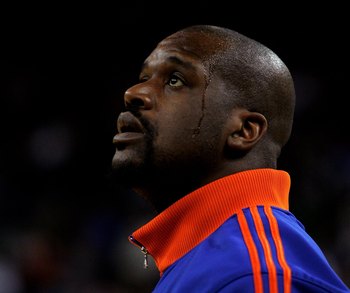 Ladies love when he's rocking the Fu Manchu, and big Shaq looked like a Buddhist monk in a basketball uniform at times, but this nickname, too, comes from 1990s hip-hop "slanguage."

Gone are the unforgettable days of Shaq performing with the hip-hop group—the Fu Schnickens—on the Arsenio Hall Show, but don't be surprised if Shaq rocks a breakdance move on the next round of Dancing with the Stars. 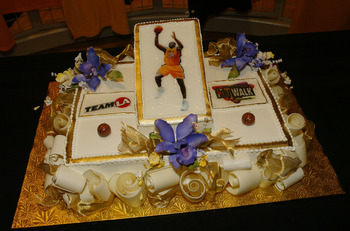 Shaquille O'Neal gets his cake, and he eats it, too.  He's an athlete, entrepreneur and player—former player—not necessarily in that order.

Aside from being seen with some glorified hood rats, he's done well in life, but he'll continue to be associated with that ugly word...rat. 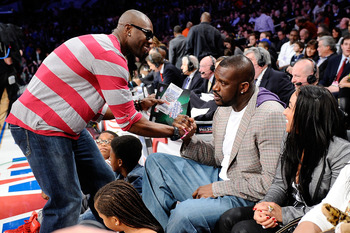 Shaq's ex-lady—Nicole "Nikki" "Hoopz" Alexander—also has a cool nickname.  Diesel was engaged to "Hoopz," who is known from her appearance on the classic VH1 television program The Flavor of Love.  She is lovely.

Pictured, here, with Shaq—while Terrell Owens greets the big man—Nikki is as fly as can be.  Look at the rock on her finger.  I'd rat on anybody I knew if Shaq bought me a ring that big. 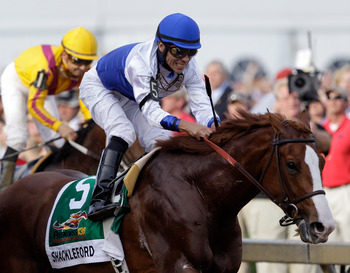 And they go a little something like this—hit it: "I'm a horse.  Kobe ratted me out.  That's why I'm getting a divorce."  You know the rest.

Tell him how his cake tastes...ladies.  (Writer's rights—I added that last part, of course.)

In parting, let me leave you with this: The Diesel is gone, but he won't be forgotten.  From breaking backboards to samurai swords, the NBA will miss Shaquille O'Neal.

Don't miss me.  Catch me on the next edition of Lake's Shaq Report, better known as The Cake Report.