Michael Vick and the Biggest, Most Athletic Freaks at Each Position in the NFL 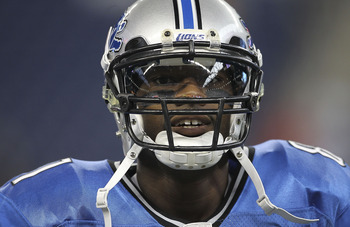 Some players are technicians at their position, relying on refined skills like accuracy, route running, footwork or other position-specific skills.

Other players, however, rely on freakish, raw athleticism to make their mark on the game and outperform their competition.

The requirement for being on this list is that the player has to have made a Pro Bowl (sorry, Taylor Mays).

Without further ado, here are the biggest athletic freaks at each position in the NFL. 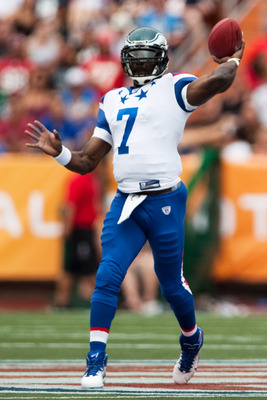 Michael Vick leads the most dynamic and explosive offense in the NFL and is the most freakish athlete at the quarterback position.

Vick may be just a few hairs above 6'0", but he is a dangerous dual-threat quarterback who can make a huge play at any time on the ground or through the air.

Vick ran a 4.33 second in the 40-yard dash in the scouting combine, a number that is unheard of for a quarterback.

Not only is he fast, but Vick has tremendous arm strength, as evidenced by his almost 61-yard pass to DeSean Jackson that led to an 88-yard touchdown on Monday Night Football. 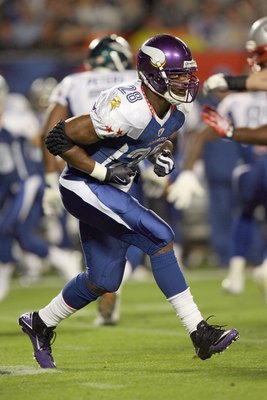 Adrian Peterson is a special athlete and is a lock to go in the top three of many fantasy drafts in the upcoming year.

Peterson is a 6'1", 217-pound running back who runs with a purpose, and he is the most freakish athlete at the position.

"Purple Jesus", as he is called, ran a 4.38 in the 40-yard dash in the scouting combine and doesn't even rely on his sole speed to beat the defense. He is also a powerful force who runs over defenders in the open field.

No. 28 has parlayed his freakish athleticism into tremendous on-field success, and is now a perennial Pro Bowler. 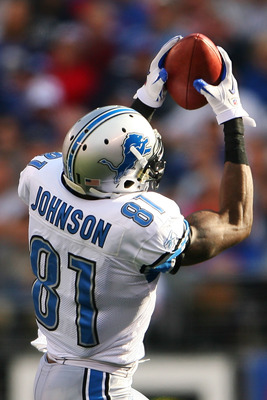 It's a good thing Calvin Johnson made the Pro Bowl this year, otherwise, the star wideout wouldn't have met the criteria for the list.

Johnson is a 6'5" beast who was a can't-miss prospect out of Georgia Tech and is now a can't-miss wide receiver on Detroit.

At his Pro Day, Johnson went absolutely nuts: the receiver posted a vertical jump of 44 1/2 inches and broad jumped 11 feet and 10 inches.

Johnson also ran a 4.33 second in the 40-yard dash at the scouting combine, and his raw athleticism has made him a dangerous player in the NFL. 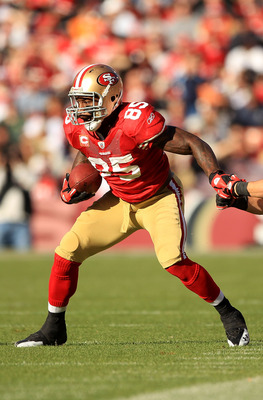 Davis is a monster, weighing in at about 250 pounds and checking in at a height of 6'3", but plays like a receiver in the open field.

Davis is no sloucher as a blocker either, and his athleticism translates to invaluable versatility on the field. 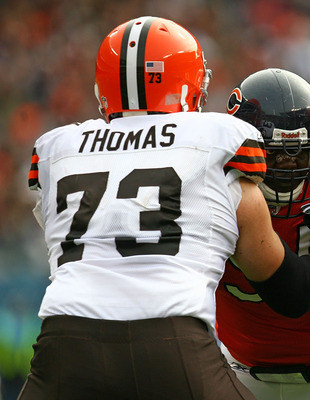 Joe Thomas doesn't strike many as the most athletic guy, but he is the type of deceiving athlete that makes for success in the NFL.

Thomas gets less credit than he deserves, facing off against the likes of Terrell Suggs and James Harrison on a regular basis.

The Browns lineman is a freakish athlete, running a 40-yard dash in under five seconds. He is also a perennial Pro Bowl pick.

It's not easy to find a freakish athlete on the offensive line, but Thomas is a fantastic player and deserves the honor for how well he performs. 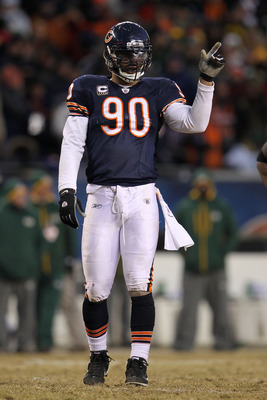 Julius Peppers, the biggest freak of an athlete on the defensive line, is as close to a no-brainer as you can get with this list.

Peppers is an animal, checking in at 6'7" and 280 pounds; the lineman is also scheme-diverse, having played in a 4-3 but also capable of succeeding in the 3-4.

The defensive end is a monster to face: he has posted double-digit sack totals in six of the nine years he's been in the NFL.

Peppers is physically gifted and is a true cornerstone at the position, wherever he goes. 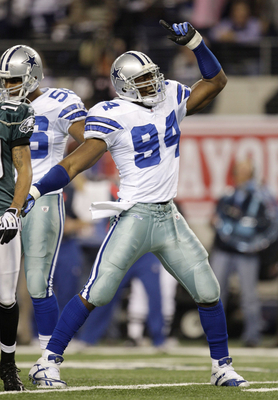 DeMarcus Ware is a sculpted athlete, capable of sacking the quarterback at a prolific rate as a 3-4 rush linebacker.

Ware benefited from Wade Phillips' aggressive defensive approach in Dallas, but he is no product of a system—the linebacker is a straight-up beast.

The Cowboy is arguably the best pass-rusher in the NFL, having led the NFL in sacks last year. 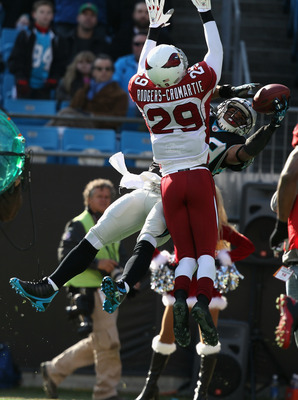 It seems that freakish athleticism runs in this family, as Dominique's relative Antonio Cromartie is also a pretty good athlete.

The cornerback has a 40.5-inch vertical jump and a 11'1" broad jump, showing his raw athleticism.

Also, the Tennessee State product has 13 interceptions in three NFL seasons, and he has relied on his pure talent to be a gamebreaker at the highest level. 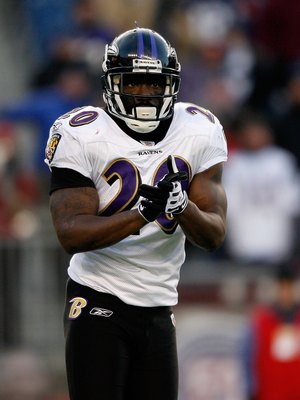 If Taylor Mays met the list criteria, he'd have been the safety in this spot, not Reed.

However, Ed Reed is a Pro Bowler and an athletic freak. The 5'11", 200-pound safety is one of the most feared defenders of this generation.

The Raven, despite playing in just 10 games this year, led the NFL in interceptions, showing just how athletic he is.