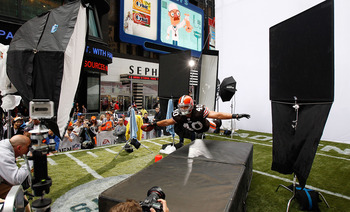 Is Madden 2012 cover boy Peyton Hillis flying? In real life that wouldn't be possible, but in Madden, you might be surprised.

One of the most popular video game franchises, Madden NFL, has gone to new heights. With seemingly new features every year, Madden becomes more and more popular.

Some play for the love of the game, but other gamers, like me, love getting laughs out of the glitches in the game.

Here are 11 of the best glitch videos from the Madden NFL series (in no particular order):

So, what if the NFL did not have referees?

Well, the game would probably not be affected at all.

What happens when you mix 6'2'' wide receiver Rod Gardner and 5'8'' safety Bob Sanders?

Well you just found your answer!

Though this may not constitute as a Madden glitch, it is still probably one of the funniest things you will see in the long series of Madden.

This comes from John Madden Football '92.

I thought ambulances were supposed to help injured players, not knock over other players and injure them, and then drive away.

Well, Rex Grossman has accomplished almost nothing in his illustrious career.

It's good to see him having the time of his life in this virtual game.

If this was possible in real life, I'm sure Grossman would be the first to experience this.

While this video is very similar to Grossman's video, Law does not deserve the title of FAIL. He is a Hall of Fame cornerback and unlike Grossman, he can perform exceptionally well on the field.

It was later discovered that Roger Goodell banned Dawkins from football.

Eli, You Will Never Be Your Brother...

As an Eagles fan, it makes me proud to see this video.

In fact, I hope this comes true next season. Did I mention I was an Eagles fan?

Well after the recent possessing of Josh Bullocks, numerous priests have performed exorcisms on the former Saint safety.

Well, this one Giants cornerback was apparently tired of defending the wide receiver, so he took on another assignment.

For any aspiring NFL kickers, watch this video and you will learn how to never miss a field goal again.

Brett Favre just couldn't get enough football. In fact he was playing in his 80's.

After Aaron Rodgers' retirement, the Packers decided to give Favre another shot.

Looks like Favre forgot how to throw a football.