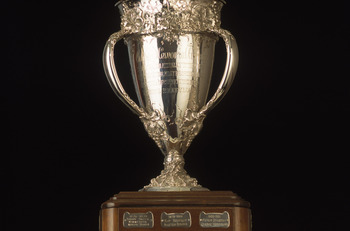 Every year, the NHL Awards takes place with an extravagant party with tons of entertainment and celebration, but what the fans really care about is the awards and the players that win them.

The Calder Memorial Trophy is given out every year to the player selected as the most proficient in his first year of competition in the National Hockey League. The trophy is named after the first NHL President, Frank Calder, who held the position from the league's inception in 1917 until his death in 1943.

Since then, the trophy has been held in the hands of greats such as Terry Sawchuck, Bobby Orr, Mario Lemieux, Alexander Ovechkin and most recently, Buffalo Sabres defenseman Tyler Myers.

This is just a handful of names that includes many Hall of Famers.

This year, there are three fantastic young players who've made the cut and have begun to make a name for themselves in the NHL: Logan Couture of the San Jose Sharks, Jeff Skinner of the Carolina Hurricanes and Michael Grabner of the New York Islanders. 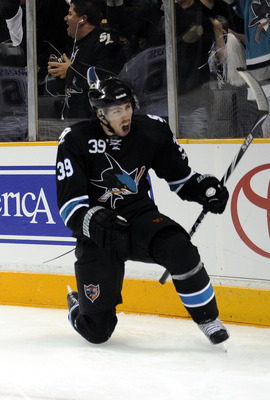 Logan Couture established himself as a clutch performer this year for the San Jose Sharks.

Not only did he finish second on the powerhouse team in goals with 32, but eight of those came as game-winners for the Sharks, good enough to tie him for fourth in the league. He also made a name for himself on the Sharks power play, rifling in 10 power-play goals for them.

He finished the season strong, bringing up the sixth spot on the team with 56 points—not too bad for a kid who had virtually no hype surrounding him to start the season. He is currently continuing his phenomenal rookie campaign by already putting a goal past the Los Angeles Kings in the Sharks' first playoff game, as they pulled out a 3-2 overtime win in Game 1.

Expect this guy to be one of the league's elite scorers in the near future, as he has already proved himself as a pressure performer. 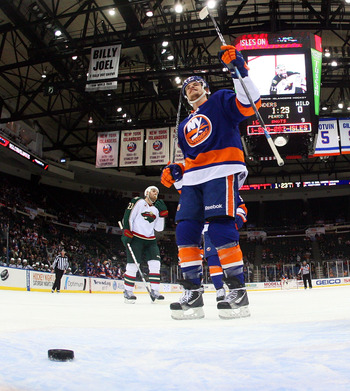 If you would have asked me who Michael Grabner was in October, my guess could have ranged from the lead singer of an 80s rock band to maybe someone you knew back in college.

But no way would I have answered with potential Calder Trophy Winner.

Grabner took the stage for the basement-dwelling New York Islanders after being let go by both the Florida Panthers and the Vancouver Canucks, and he stole the limelight.

Grabner burst onto the scene this year with 34 goals (leading all rookies) and 52 points, which was good enough for third amongst rookies. He led all rookies with six shorthanded goals and finished only second to his teammate, Frans Nielsen, who put in one more.

His penalty killing became a major factor, mostly due to his incredible speed, which was fast enough to win him the Bridgestone Fastest Skater competition during the 2011 All-Star weekend.

He is going to be a core building block for the Islanders in the years to come, and defenseman, beware: This kid will make you look like you're standing still if you aren't ready.

Jeff Skinner of the Carolina Hurricanes 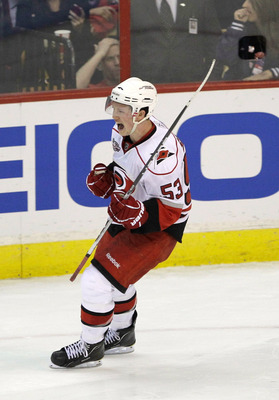 The first time I saw Jeff Skinner was at the 2011 All-Star fantasy draft, and honestly, I thought he was just some lucky kid who may have won a competition and got to sit with the players.

But his 12-year-old appearance disappears really quickly once you see this kid skate circles around the NHL veterans.

He also became the seventh-youngest player to record a 30-goal season.

I think the most important part of Skinner's resume is when he played at the top of his game, right when they needed him most.

Although the Carolina Hurricanes didn't make the playoffs, Jeff Skinner was among their top performers in the last two weeks of the season. He was playing way over his head and had no fear crashing the net or firing shots top shelf

This kid is the real deal, and the Hurricanes will be on their way back to the top as he tunes his game. 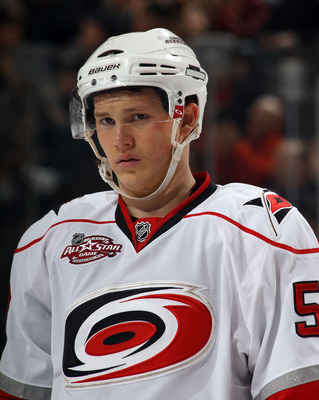 I see Jeff Skinner being this year's Calder Trophy winner without a doubt in my mind.

Couture and Grabner had great rookie campaigns and will continue to be forces in the NHL, but in my own opinion, Skinner not only put up the most impressive numbers, but he was an absolute crutch in the Hurricanes organization.

He immediately became a leader and a go-to guy for the Canes right along with Eric Stall and Cam Ward. He deserves this trophy and will continue to win trophies throughout his career.

Who's your pick? Couture? Skinner? Grabner? Or do you think someone else should have made the cut? Let's here those picks in the comments section!