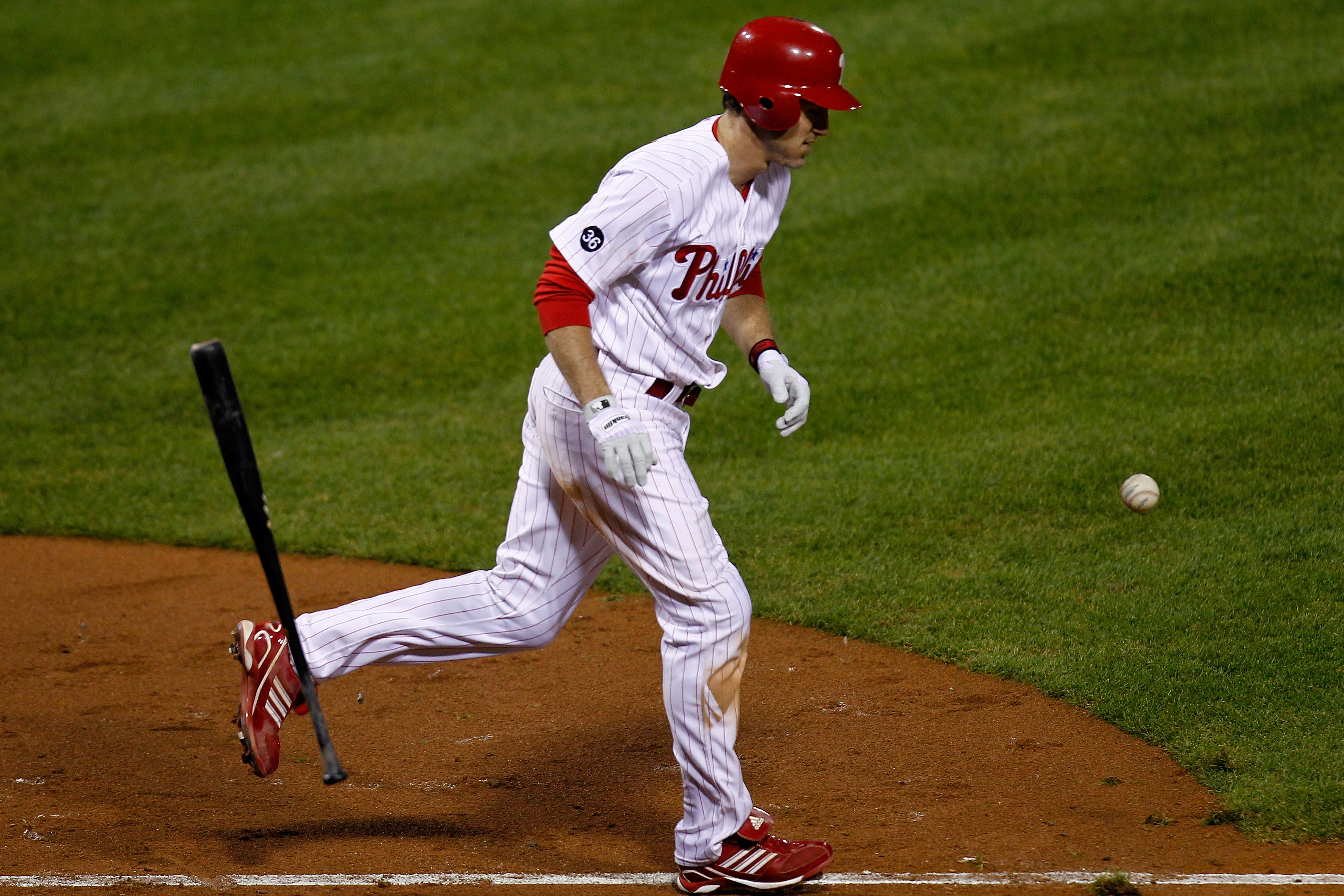 Simply amazing. The MLB season is only about two weeks old, and some teams already have big holes to fill. The Philadelphia Phillies are doing quite well and are atop the National League Eastern Division with a 7-2 record, but still are without a top offensive presence in second baseman Chase Utley (pictured at left).

Similarly, the St. Louis Cardinals stumbled out of the starting gate and now own a 3-6 record. Most shocking, however, is the situation of the Tampa Bay Rays. After winning the American League Eastern Division crown in 2010, the team has gone just 2-8 and holds the major leagues' worst team batting average at .163.

Sure enough, people are already talking about trades that these struggling squads could make to instantly improve the team and fill any holes. Naturally, it is only April 12 and to even think about making trades this early in the season is ridiculous. Yet, one month from now, it might not be a bad idea.

Here are trades that the Phillies and some other teams should consider if their key players don't return soon or if their records do not improve. 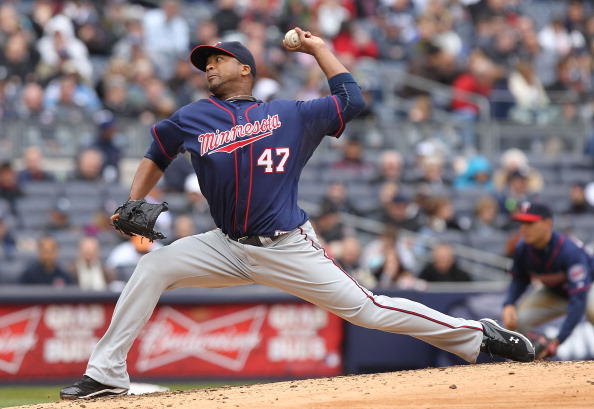 During spring training, the St. Louis Cardinals suffered a devastating blow. All-Star pitcher Adam Wainwright suffered an elbow injury and underwent Tommy John surgery, thus ending his season. Since the start of the season, his loss has been devastating to the team as the Cardinals are in second-to-last place in what is turning out to be an extremely tight NL Central.

Needless to say, the pitching staff needs a jump start and Minnesota Twins starter Francisco Liriano is the perfect man for the job. Given how his team already spent a good chunk of its money on catcher Joe Mauer's heavy contract extension, the odds of Liriano returning to the Twins in the long-term are fairly slim. His contract expires at the end of 2012, and chances are that the Twins will look to move him at some point.

That being said, Cardinals GM John Mozeliak should get on the phone and work out a deal now. If it happens, Liriano could potentially do for the Cardinals what Cliff Lee did for the Phillies in 2009.

In return, the Twins would receive outfielder Colby Rasmus, who has wanted out of St. Louis since last year. If Minnesota would be willing to also give up one of their outfielders, the situation in St. Louis would surely improve. 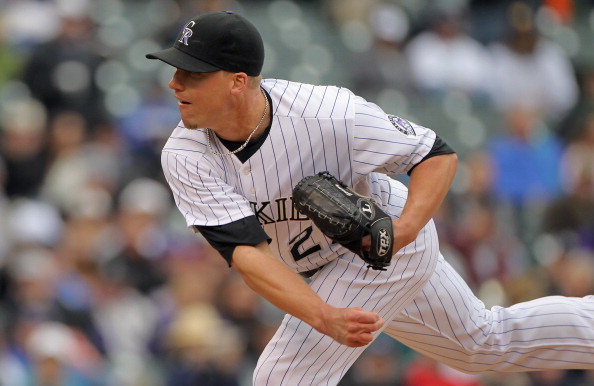 Despite the Phillies getting off to a great start, they are still without All-Star closer Brad "Lights-Out" Lidge.  He suffered a shoulder injury in spring training, and isn't expected to return until around the All-Star break.  Ryan Madson is expected to handle the closing duties until then and he will surely do a fine job in that position, but it still wouldn't hurt to have a little insurance just in case he himself is injured.

Enter Matt Lindstrom of the Colorado Rockies (pictured at left). He was the Houston Astros' closer in 2010 and put up mediocre numbers: only 23 saves with a 4.39 ERA.

The numbers may seem concerning, but Lindstrom could be good closer insurance for the Phillies. He is familiar with the position and if Madson gets hurt or just needs a night off, he can be relied on to finish the game. With a top defense behind him, he should be fine.

At this point, Lindstrom is just a middle reliever on Colorado. Thus, he will come cheap. Low-level prospects should be more than enough to land him. 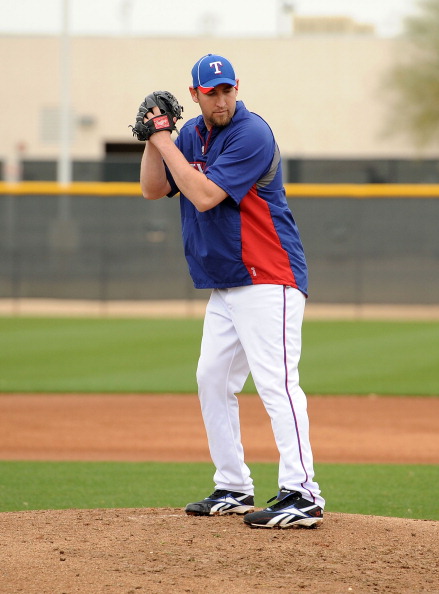 This offseason, the reigning American League Champion Texas Rangers took a big gamble. The team signed former Cy Young Award winner Brandon Webb to a one-year contract. This contract is a big risk considering how Webb missed all of 2010 and nearly all of 2009 with shoulder trouble.

Of course, Webb's shoulder started hurting during spring training and he began the season on the 15-day disabled list. According to ESPN, he felt "encouraged" after his latest throwing session." Still, there is no timetable for his return.

Given the uncertainty surrounding Webb, it would be beneficial to the Rangers to make a play for Francisco Liriano. To acquire him, they could ship disgruntled third baseman/designated hitter Michael Young to Minnesota.

Liriano would be a good fit on the Rangers' young pitching staff, filling the electrifying void left by the departure of Cliff Lee. On top of that, the Twins are one of the teams to whom Young would approve a trade, so it could actually happen. The only snag would be the remaining money left on Young's contract, but the Rangers could probably cover most of that. 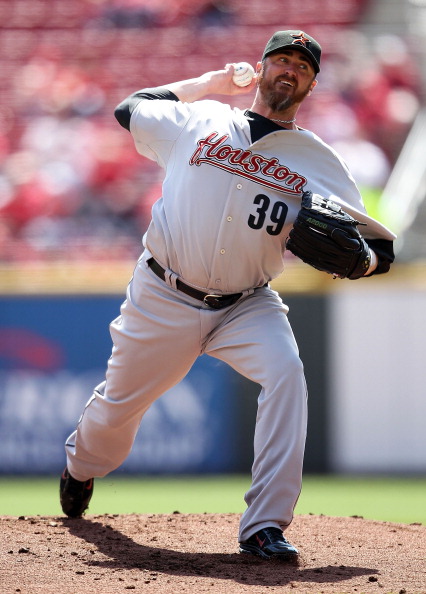 While the New York Mets weren't expected to do well in 2011, one blow that they did not anticipate was being without ace Johan Santana until at least the All-Star break. The hard-throwing lefty is recovering from shoulder surgery he had towards the end of last season, and there is no timetable for his return.

Needless to say, a pitching rotation led by Mike Pelfrey simply won't do. What is missing is someone who can assume a leadership role while Santana is gone. The answer to that problem could be Houston Astros starter Brett Myers.

Myers is currently under contract with his team for two more seasons, plus an option for 2013. Given how the Astros aren't going anywhere this season and will more than likely finish dead last in their division, Myers will certainly be an attractive trade target.

To bring Myers to New York, the Mets could ship lefty Jon Niese to Houston. He is a top prospect with a high ceiling, and could flourish on a small-market team like the Astros. If Myers adjusts well to New York and Santana comes back healthy, the Mets could have a potentially dangerous duo at the front end of the rotation. 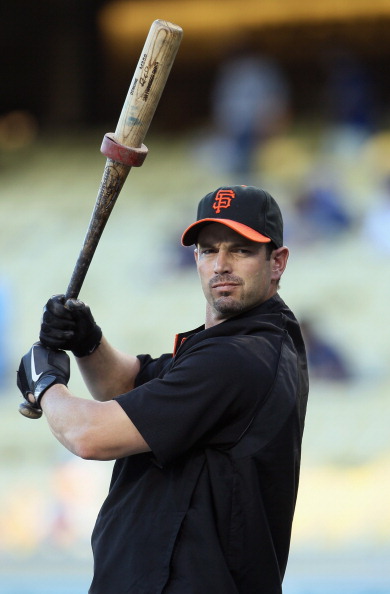 To say that the Tampa Bay Rays have just gotten off to a slow start would be an understatement. To put it bluntly, they've really been hit hard by the losses of Carl Crawford and Carlos Pena and are simply not the same team anymore.

As was mentioned at the beginning, the team is tied for last place in the AL East with a 2-8 record and has the worst team batting average in all of baseball at .163. Combine that with the controversy surrounding newly-retired outfielder/DH Manny Ramirez and his second positive drug test, and this is a young team who needs a leader to get them out of their funk.

Given the team's biggest needs, the best option for them appears to be San Francisco Giants outfielder Aaron Rowand. If they could work out a deal that brings him to Tampa in exchange for outfielder Matt Joyce or first baseman Dan Johnson, the team would be getting a hard-nosed, rough and tumble, blue-collar player who just might be able to inject life into the team.

Overall, Rowand's tenure in the Bay Area has been labeled as forgettable and underachieving. Yet, Rowand has gotten off to a good start this season, batting .389 and going 7-for-18 in six games. He may not have the power of Pena or the speed and hitting ability of Crawford, but Aaron Rowand has the ability to be a spark plug for a young and depleted Rays squad. 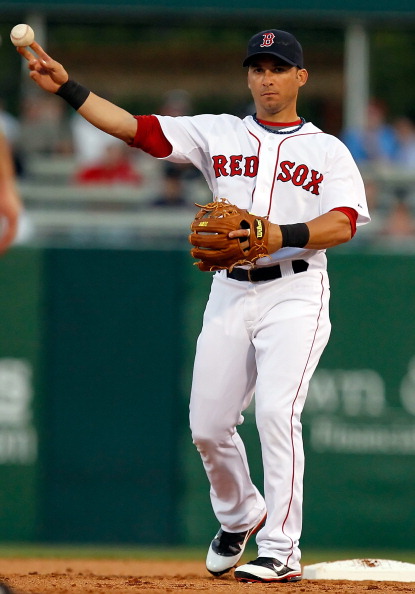 At this point in the season, the Phillies are missing a huge presence in their lineup. All-Star second baseman Chase Utley missed most of spring training with knee tendinitis, and still is only participating in limited drills. Surgery has been determined a last-resort option, but there is no timetable for Utley's return at this point.

His spot at second base has been assumed by Wilson Valdez who has done a fine job, but lacks the pop that Utley brings to the table. That being said, with no return date in sight, it could be time for the team to make a deal in the near future.

Based on infielders around the MLB, viable options for the Phillies could be Marco Scutaro (pictured at left) or Jed Lowrie, both of the Boston Red Sox. Both men have the ability to play multiple infield positions, so them learning second base would not be an issue.

Scutaro has some pop in his bat along with great ability to get on base, so putting him in the No. 2 spot could be beneficial to the team. With Ryan Howard and Placido Polanco batting behind him, he would definitely score a lot of runs.

Lowrie is a slightly more attractive option due to his being a switch-hitter, but he has a history of injuries and has never been a full-time player. Yet, in 55 games in 2010, he posted a .287 batting average with nine home runs and 24 RBI, not to mention a .381 OBP. Thus, he might have more upside than Scutaro, apart from being younger.

If Utley doesn't make any progress over the next month, the Phillies should seriously consider bringing one of these two men aboard, probably in exchange for outfielder Ben Francisco.