Texas Rangers Preview: Projecting the 5 Most Improved Rangers in 2011 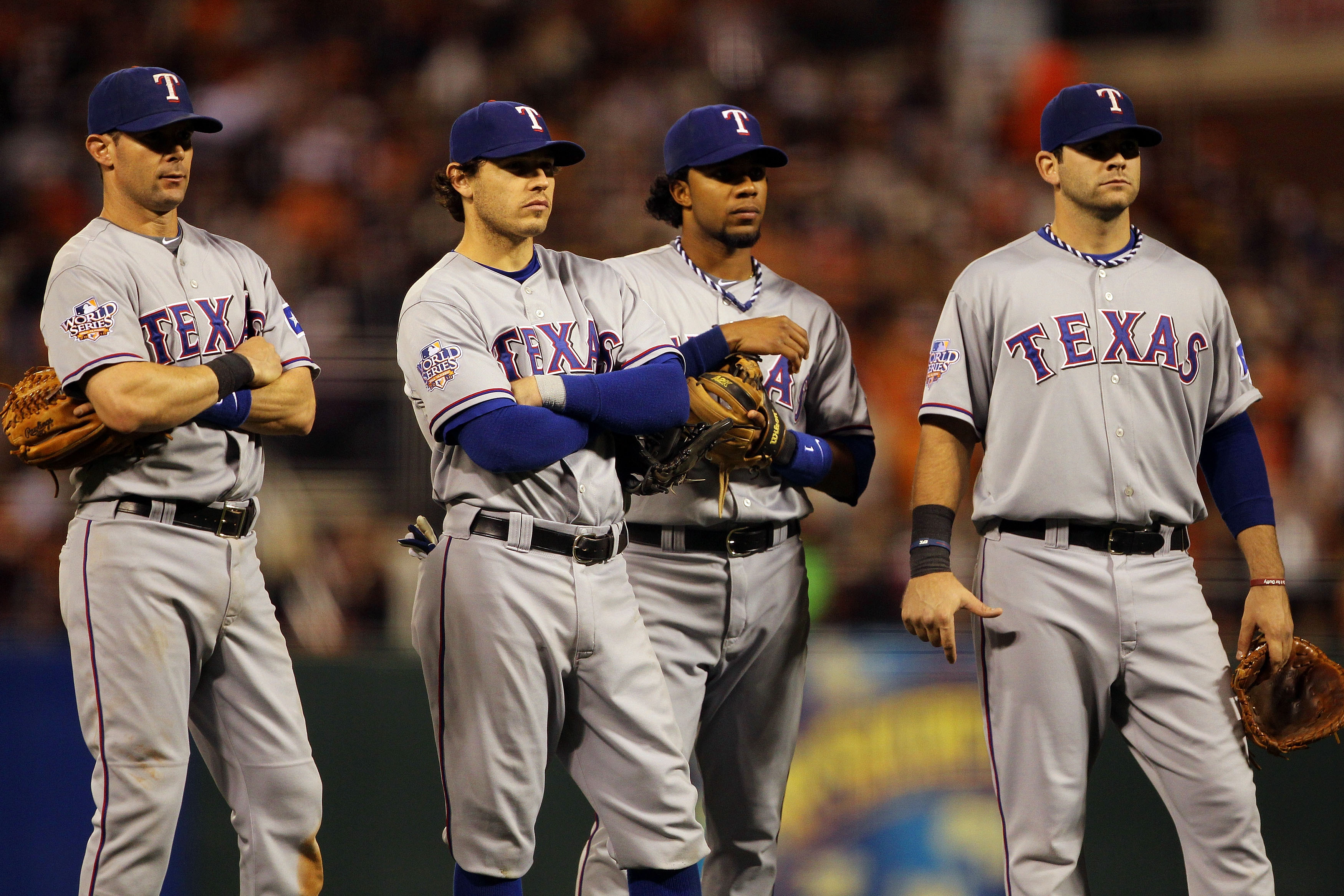 Blessed with a solid core of dynamic hitters, talented pitchers and skilled defenders, the Texas Rangers possess an exciting, well-rounded team that will endeavor to defend their 2010 American League Championship.

Stars like Josh Hamilton, Michael Young and Adrian Beltre have track records to give an idea of what to expect from them in 2011. If health permits, the Rangers know what type of production they will likely receive from well-established players as they seek to return to the World Series.

To do so, they will need the production from the stars, as well as players stepping up their game throughout the squad. With loads of emerging talent throughout their roster, there is any number of players who could turn a corner in 2011 to make valuable contributions to the Rangers efforts to once again reach the playoffs.

As we steadily progress towards opening day, let's check out some of the Rangers poised to make leaps in their development and become significant players for Texas in 2011. 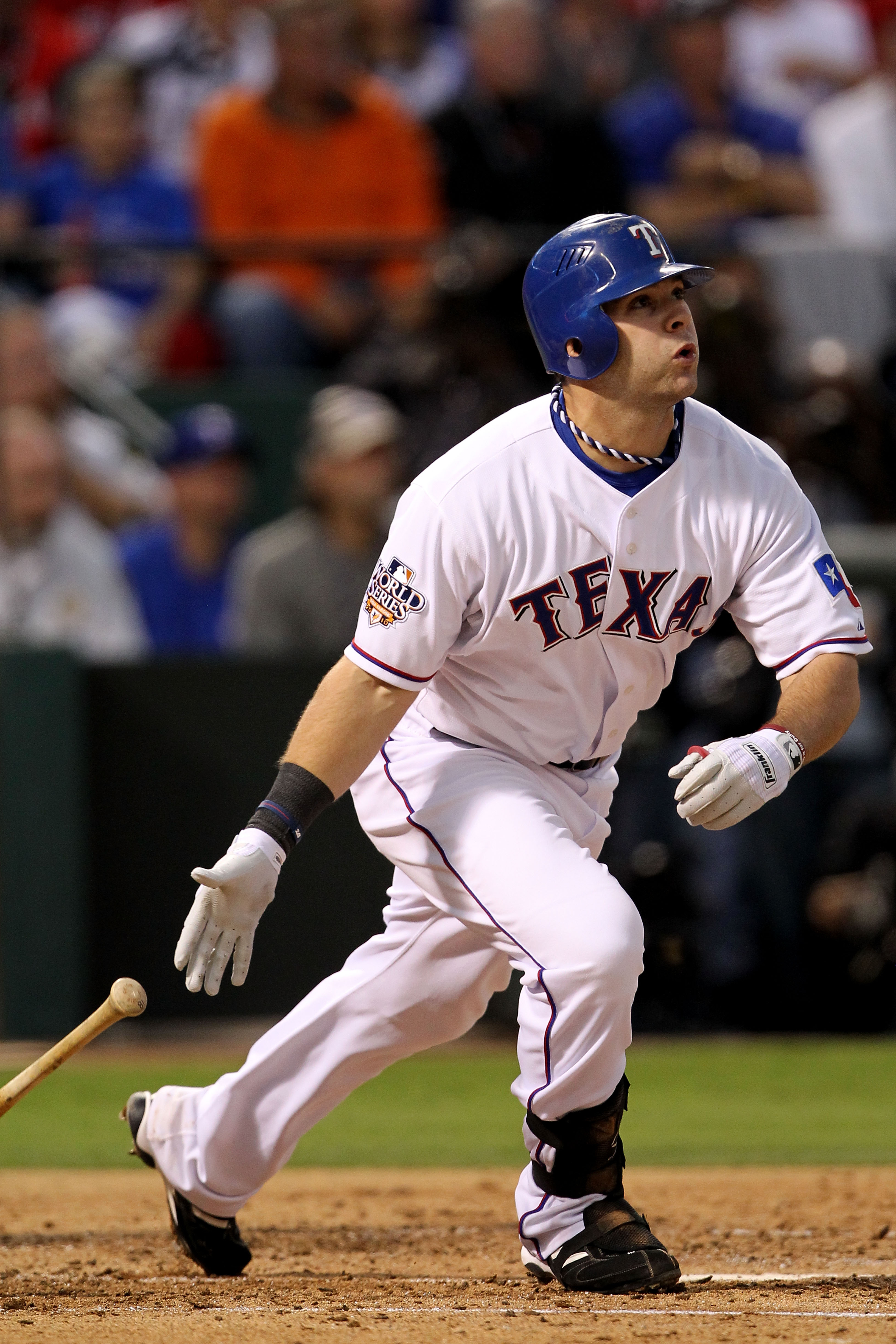 Despite Michael Young's transition to a new position across the diamond as a part-time first baseman and designated hitter, as well as the Rangers import of another competitor at first base, Mike Napoli, there will likely be a role for the 25-year-old Mitch Moreland to play for the 2011 squad.

With such a logjam of MLB talent apparently in the mix at first for Texas, Moreland offers a left-handed bat that the predominantly right-handed Rangers might find vital in their quest to defend their American League championship.

Of the projected regulars on Ron Washington's 2011 team, only Josh Hamilton and Julio Borbon hit from the left-handed batters' box, with the majority of the roster hitting right-handed.

Though Moreland's late-2010 big-league debut only included 173 plate-appearances, he displayed solid power, an ability to reach base and a reliable glove at first.

He excelled especially against right-handers, giving Ron Washington hope that he may excel in a platoon role for the 2011 Rangers. In 150 plate appearances against righties, Moreland slugged nine home runs with a .869 OPS in his first taste of the big leagues.

Moreland's two months with the big-league squad earned him regular playing time in October, tallying another 51 plate-appearances in the postseason, in which he hit .348 with a .900 OPS and seven RBI.

Though he was a minor-league pitcher just two years ago, Moreland has done nothing but hit in his four years as a professional ball player.

If he continues to follow the pattern he has established thus far, the Rangers will have a difficult time keeping him out of their lineup, no matter how many first base/designated hitter-type players they accumulate.

His spring has continued exactly as he and the team will have hoped, as he has burst out of the gates, hitting .348 with a 1.183 OPS. 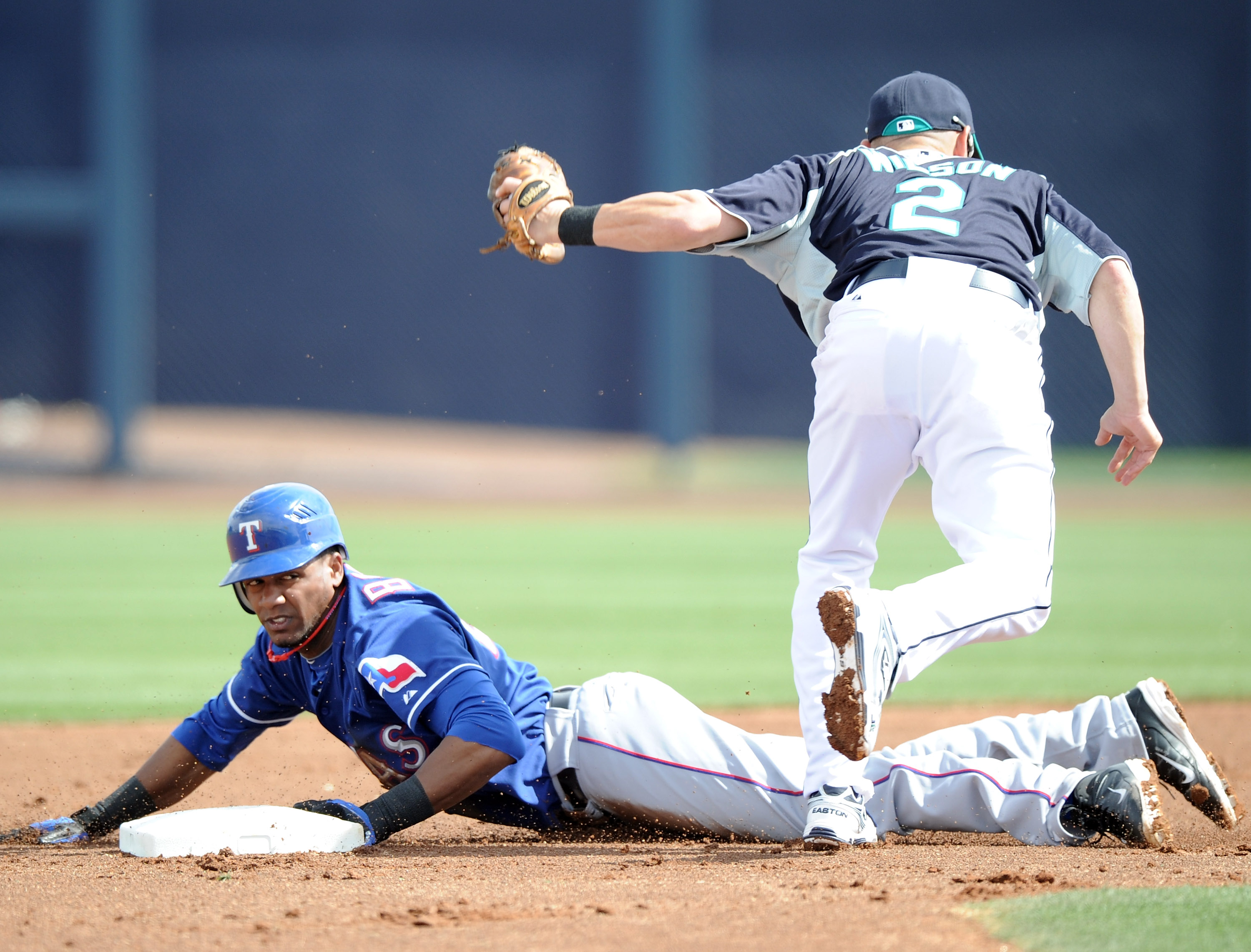 During his thrilling major-league debut in 2009, Julio Borbon offered a tantalizing glimpse of the talents he possesses. In only 46 games, he hit .312, posted a .790 OPS and stole 19 bases in limited action for the Rangers that year.

Unfortunately, he experienced a significant regression in 2010, as his average dropped 36 points, but more disturbingly, he appeared to lose all patience at the plate. In 468 plate-appearances, he only walked 19 times, when he had walked 15 times in only 179 trips to the plate in the season prior.

Possessing a career minor league on-base percentage of .360, there is reason to expect that he can rebound and get closer to the .376 mark of his debut, rather than the measly .309 OBP he posted in 2010.

He utilized those solid on-base skills to steal 81 bases in only 231 minor-league games, so if he can return to his 2009 form, Borbon can add another dimension to an already-potent Texas offense.

Since Ron Washington has already stated that Josh Hamilton will be his regular left fielder, there appears to be a significant amount of playing time available for Borbon to claim in center field.

To be a major asset to the 2011 Rangers, he will need to figure out a way to get on at a clip much higher than .309, otherwise his greatest weapon, his speed, will go underutilized.

Borbon just turned 25, so with another year under his belt and hopefully some additional maturity, he may be poised to turn a corner and become a valuable contributor to the Rangers cause. 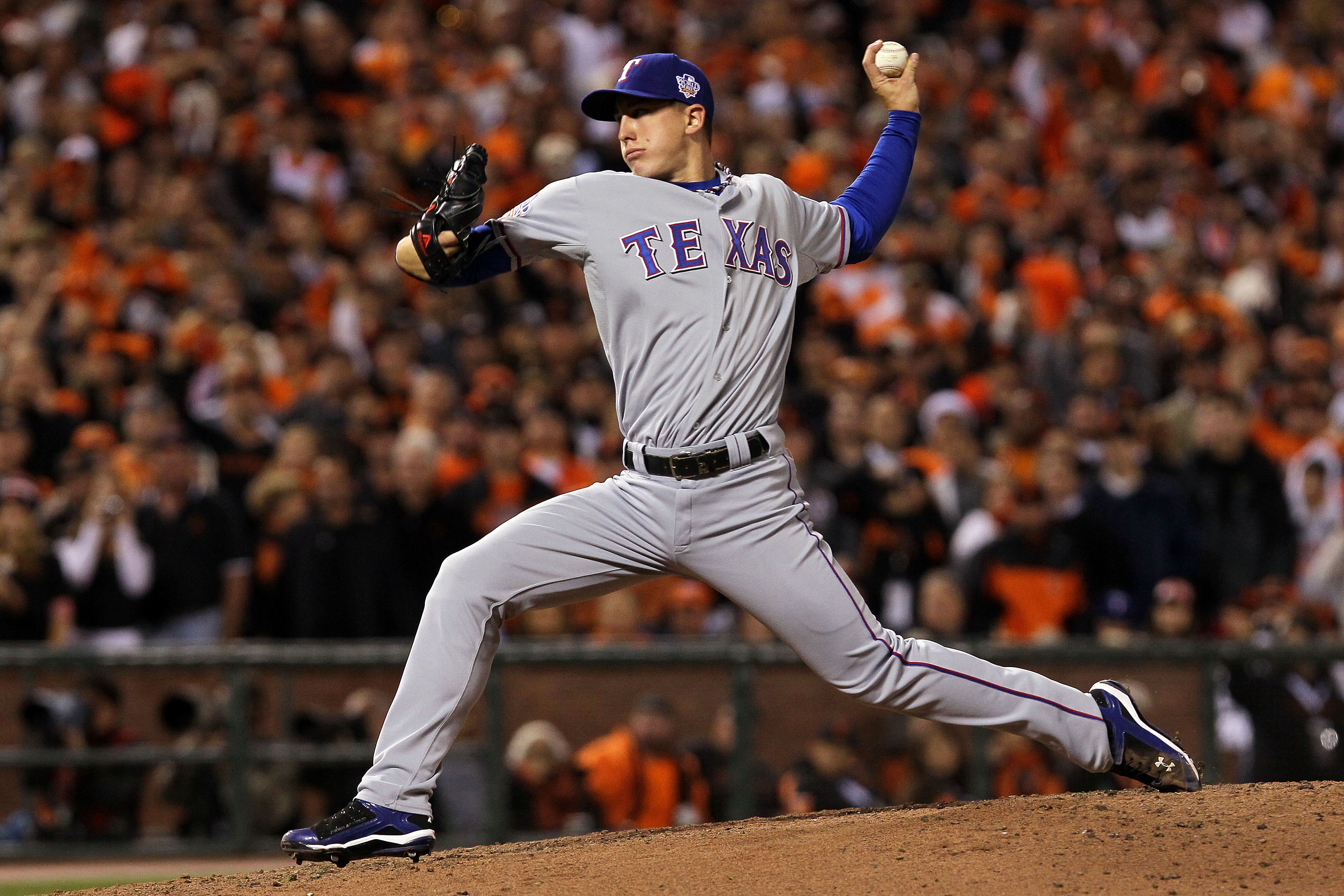 A key figure in the Rangers' spring training competition for their remaining rotation slots, Derek Holland is poised to make the leap that the franchise hoped he would.

Holland, just as recently as 2009, was ranked the No. 2 prospect in the Rangers system behind Neftali Feliz.

Throughout his four-year minor league career, he provided plenty of evidence to support the high hopes that the team holds for the young left-hander. In 287 minor-league innings, Holland went 23-9 with a 2.47 ERA and a 1.06 WHIP, striking out 302.

He has yet to experience that type of success at the big-league level, but he is only 24 and he has been slowed by injuries slightly in his early career.

Despite one disastrous portion of an inning in the World Series, Holland actually pitched well in his postseason debut, especially in the ALCS when he didn't allow a run in 5.2 innings versus the Yankees.

With a fastball sitting usually in the 94 mph range, along with a biting slider and an ever-progressing changeup, Holland is stating his case in spring training, hoping to earn a spot in the back end of the Rangers rotation.

So far in the spring, he has made two starts, only allowing a run in five innings, on five hits and no walks. His impeccable command has been the most pleasant development thus far, impressing his coaches and outside observers alike.

With another strong start or two in the preseason, I would expect Derek Holland to earn himself a job starting for the 2011 Rangers. Following the departure of Cliff Lee, an additional lefty in the rotation to complement C.J. Wilson would be preferred by Texas brass.

Derek Holland appears ready to claim that role and to fulfill the promise that many expect of the left-handed hurler. 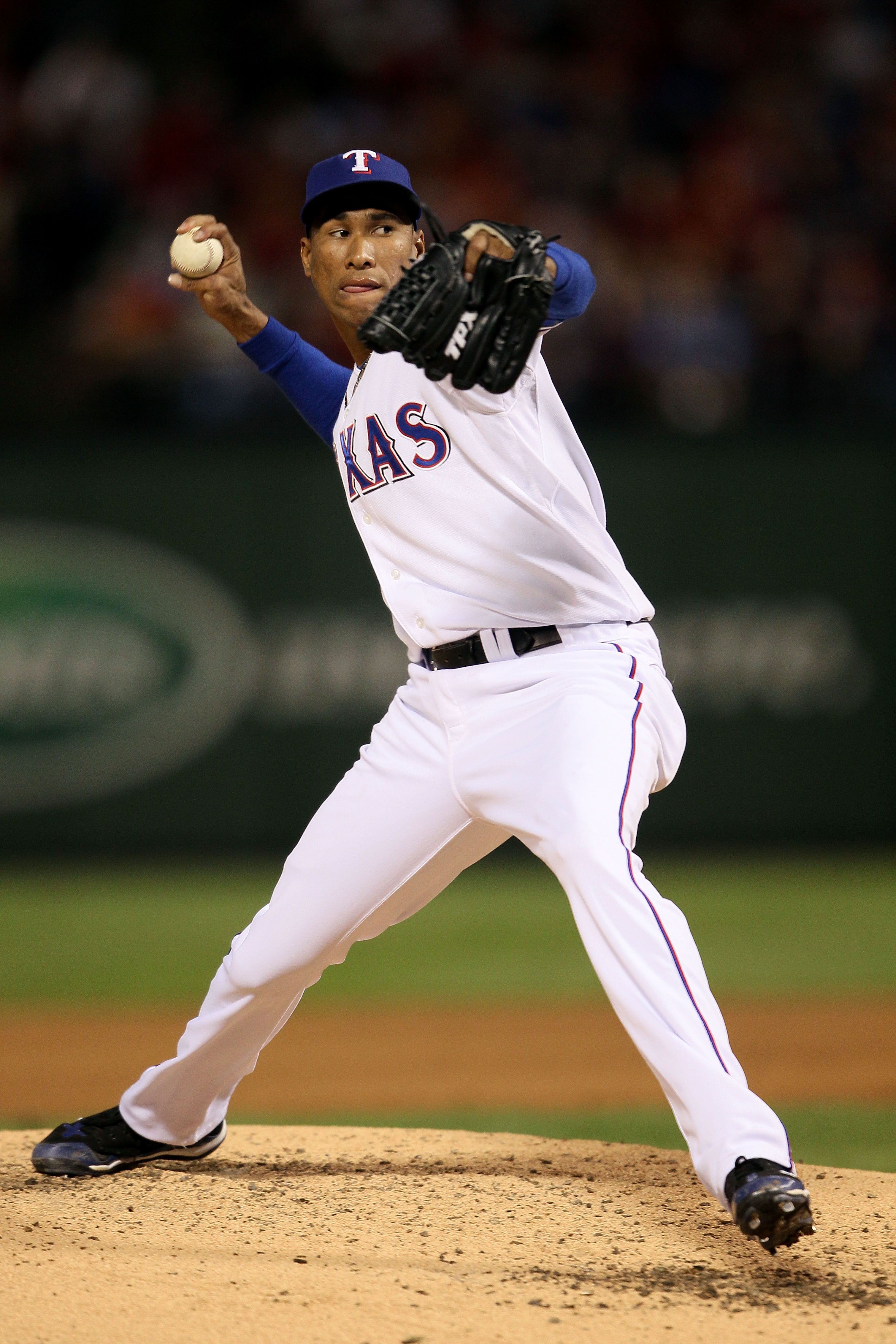 Presently, the Rangers are stretching out Alexi Ogando in an effort to prepare him for a potential move to the rotation. However, with so much competition in their spring camp for a couple rotation slots, I would expect those jobs to be claimed by hurlers with more starting experience, such as Matt Harrison or Derek Holland.

During Ogando's four-year minor league career, out of his 59 appearances, only three were starts, leading me to believe that a leap to the rotation now might not be in the cards.

Once an outfielder signed initially by the A's, the converted pitcher made significant strides early with his incredible athleticism and powerful arm. His development was derailed significantly by his admission of involvement in a human trafficking ring, which would ultimately cost him dearly, as he was prevented from entering the United States for five years.

Ogando was limited to pitching in the Dominican Summer League as part of the Rangers minor-league system to hone his skills and bide his time until his punishment had been served.

Over those four seasons, he was incredibly dominant, making the Rangers salivate over the incredible talent they had in Ogando. In 59 appearances, he hurled 111.2 innings, striking out 156 with an ERA of 1.37 and a minuscule WHIP of 0.91.

When he finally made the jump to the major leagues in 2010, he made an immediate impact in the Rangers bullpen. Using primarily his blazing fastball, which resides in the 95-plus range, and his filthy slider, Ogando dominated major league hitters just as he had Dominican Summer League opponents.

If Neftali Feliz makes a move to the starting rotation, Ogando would appear to be the perfect candidate to replace him, as he boasts similar stuff to the Rangers' young relief phenom. So far, though, it doesn't appear that Feliz will be vacating his post as of yet, so the two hurlers may combine to give Texas a lethal late-inning combo to finish of games for them in 2011.

Following the trials and tribulations that Ogando has endured, he finally appears ready to move beyond his turbulent early career in the game and progress as he was expected to as a young prospect.

I would not be surprised at all, if Ogando is the name on baseball fans' lips when discussing the breakout reliever in the league towards the end of the 2011 season. He certainly has the arm and demeanor to accomplish great things in the Texas bullpen. 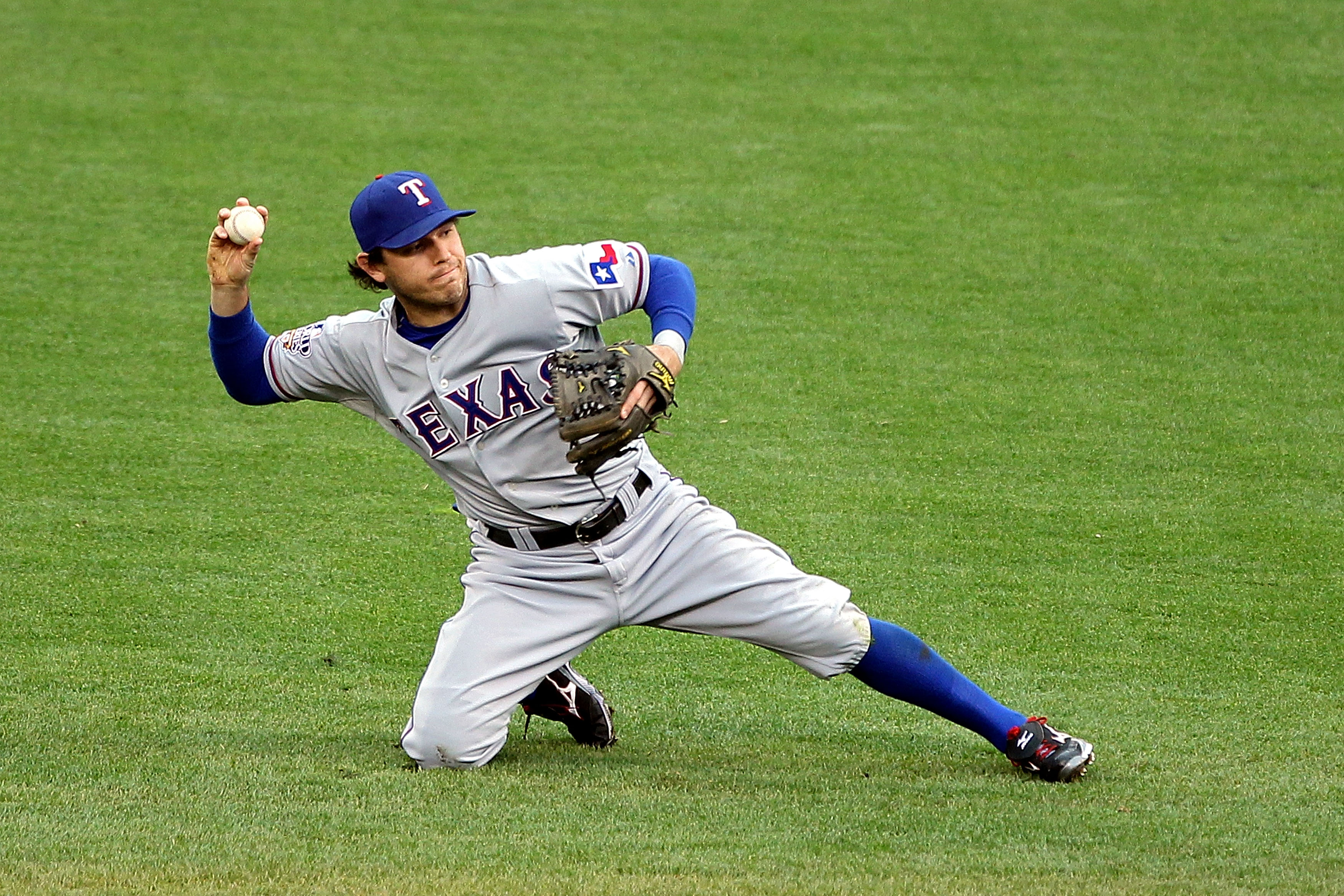 Over the course of Ian Kinsler's five-year major league career, we have seen tantalizing glimpses of the star potential that the Rangers have longed for from the talented second baseman.

The two-time All-Star is a potent blend of power and speed that has appeared to be perched right upon the verge of greater stardom for the last few years.

We have seen his ability to hit for average, peaking at .319 in 2008. His solid on-base skills and great pop for a second baseman combined to make him a potent threat that same year, seeing him post a career-high OPS of .892.

Though his batting average and on-base percentage dipped the next year, the baseball world saw Kinsler post his first-ever season of 30 home runs and 30 stolen bases.

In 2010, his power dropped, but much of that can likely be attributed to various injuries throughout the season. He raised his average 33 points again to .286, but his power was limited all year, as he posted his lowest career slugging percentage of .412.

Now 28, in what should be his baseball prime, Kinsler will hope to avoid the injury plague that has lingered throughout his first five seasons. Reportedly healthy this spring after playing a career-low 103 games in 2010, Kinsler needs to figure a way to stay on the field if he hopes to achieve the leap to the next level that he appears capable of.

During the first few weeks of 2011 spring training, Kinsler has been scorching the ball, blasting four home runs in only 21 plate-appearances. Of course, spring training statistics mean nearly nothing, but his .444 average and 1.167 slugging percentage are indicative of Kinsler doing something right at the plate.

Following his brilliant postseason run in 2010, in which he hit .296 with three home runs, nine RBI, three stolen bases and a .918 OPS, Kinsler is eager to leave his injury-filled past behind and build upon the success of his early career as a big leaguer.

With the Rangers leadoff responsibilities now resting on his shoulders, Kinsler will be tasked with jump-starting the Texas offense on a nightly basis. Whether that alters his approach to hitting shall remain to be seen, but if Ian Kinsler can manage to remain healthy, the slugging second baseman stands poised to take his already thrilling game to new heights in 2011.