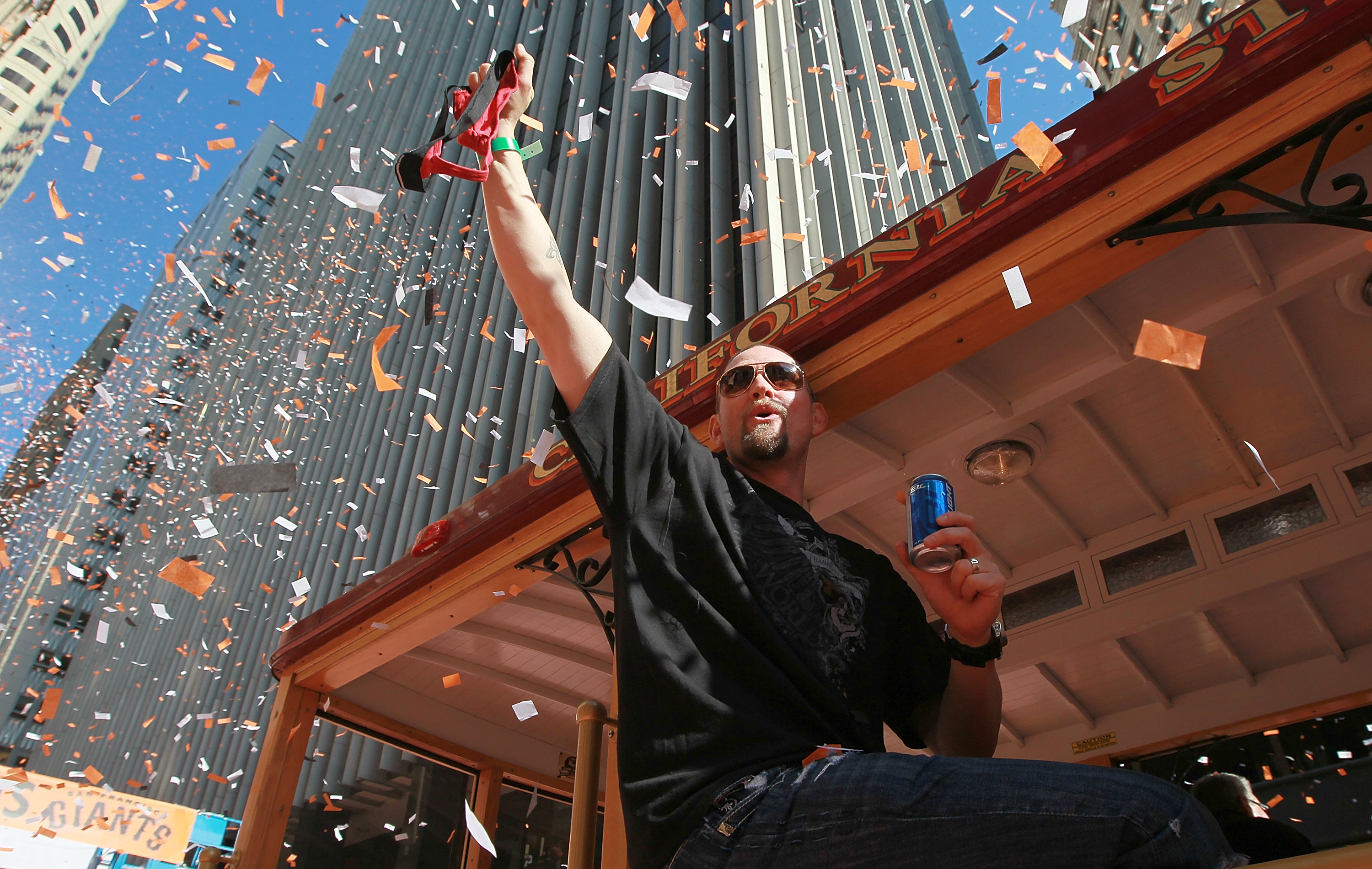 Major League Baseball's spring training is already under way, and that means it's officially time for the world-champion San Francisco Giants to put away the champagne (or Bud Light), confetti and late-night talk show laurels.

The thong can stay, though (Aubrey Huff's, not the Machine's).

Down in Arizona, the first PFP drills have been run, so you know two things.

First, someone has already embarrassed himself.

Most pitchers aren't Tim Lincecum-type athletes anyway, so asking them to field their position is a dicey proposition. Then you toss in setup men and specialty relievers? Look out, here comes the circus. Although in truth, the Gents have a pretty athletic stable from top to bottom, so maybe it's a muted show.

Second, and more importantly, our long nightmare is over, and BASEBALL is right around the corner.

With all due respect, the NFL is slowly becoming a 20-week episode of Hard Knocks, so part of me is rooting for a work stoppage simply for the peace and quiet. At least the League's tug-o'-war over the fan's last dollar is easy to process and tune out.

Forget both sides in that nonsense—we all know it will end with each pampered posse getting richer while fans foot the bill, so who really cares? Let the greedy SOBs shoot themselves in the feet until they realize it hurts.

As for the NBA, well, it's heading into the stretch run, and teams are starting to play hard every night, so I've got no beef with the Association at the moment. Nevertheless, all the coasting up to this point still leaves a sour note in the air.

Consequently, it's the pearl to the rescue.

Before that can happen, however, the exhibition season must play out, and each team must answer a few lingering questions. In the Giants' neck of the woods, there's only one major unknown, and it looms over left field.

It's a pretty big one—as in, who will play there?

Setting the Field in Left 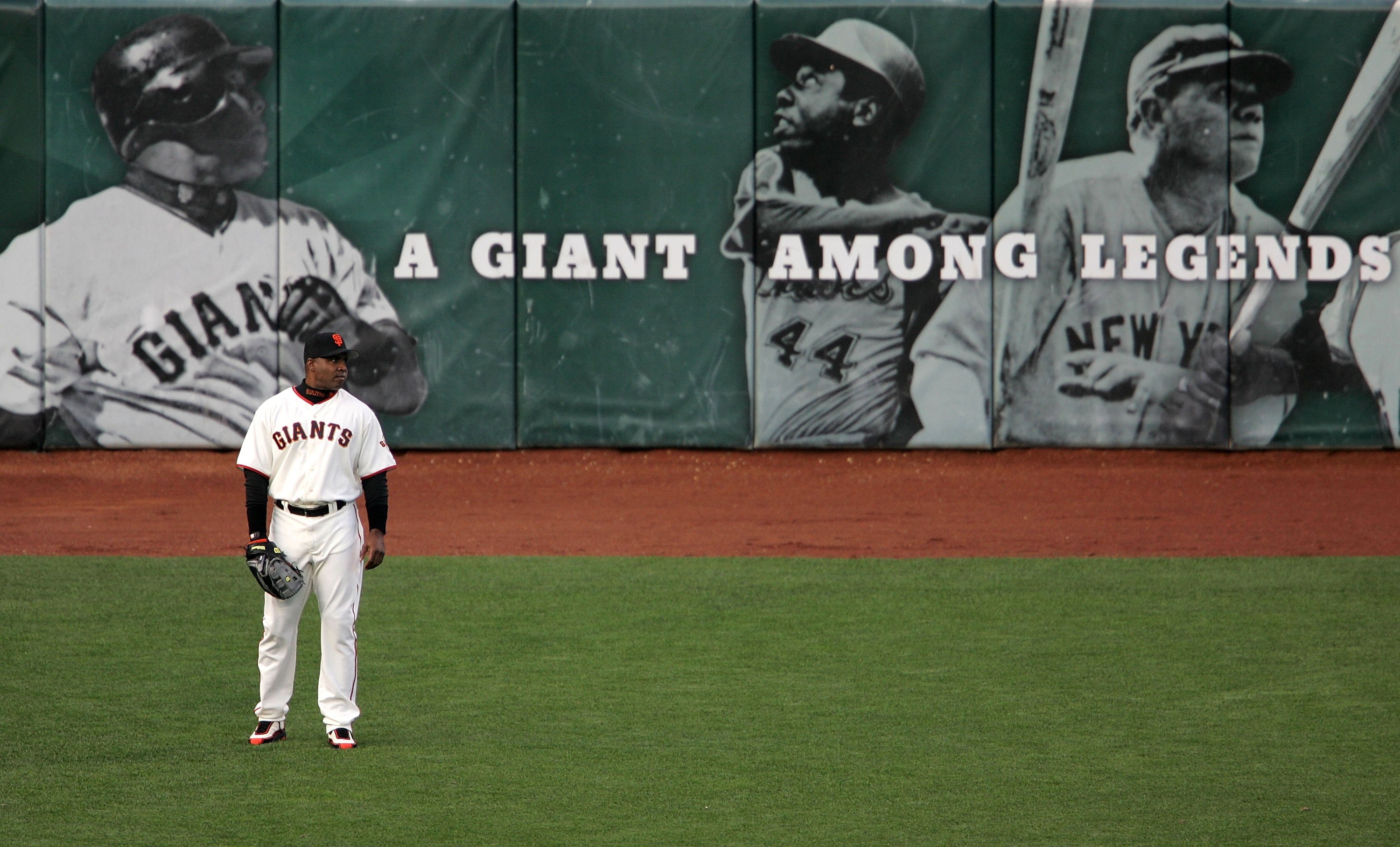 Lest anyone forget, los Gigantes are still trying to fill some rather large cleats in left.

The franchise has struggled to find an everyday replacement ever since Barry Lamar Bonds stepped off the diamond and into the crosshairs of an absurdly futile federal prosecution—going on four years (or eight depending on where you put the start date) and all the government has to show for the millions in taxpayer money it's spent is an unraveling case.

By case, I mean Greg Anderson, who's made it abundantly clear he's not about to cooperate with the feds.

The magical 2010 season would suggest the G-Men have found their regular center fielder and right fielder in Andres Torres and Cody Ross, respectively.

It's true that the idiosyncrasies of AT&T Park mean the more defensively adept corner outfielder plays in the more difficult right field, and this runs contrary to standard baseball alignment. In other words, Cody will probably see his share of left field on the road.

That detail notwithstanding, San Francisco is calling Ross the right fielder, so that's what I'm gonna do.

That means there will be quite a scrum in left—veterans like Mark DeRosa, Aaron Rowand and Pat Burrell should all get a few reps to flash their leather, while younger guys like Nate Schierholtz, Darren Ford and even Thomas Neal might get an extended look (though the latter two would probably have to barnstorm their way onto the roster).

So who's most likely to be standing in left when the dust from the position battle settles? 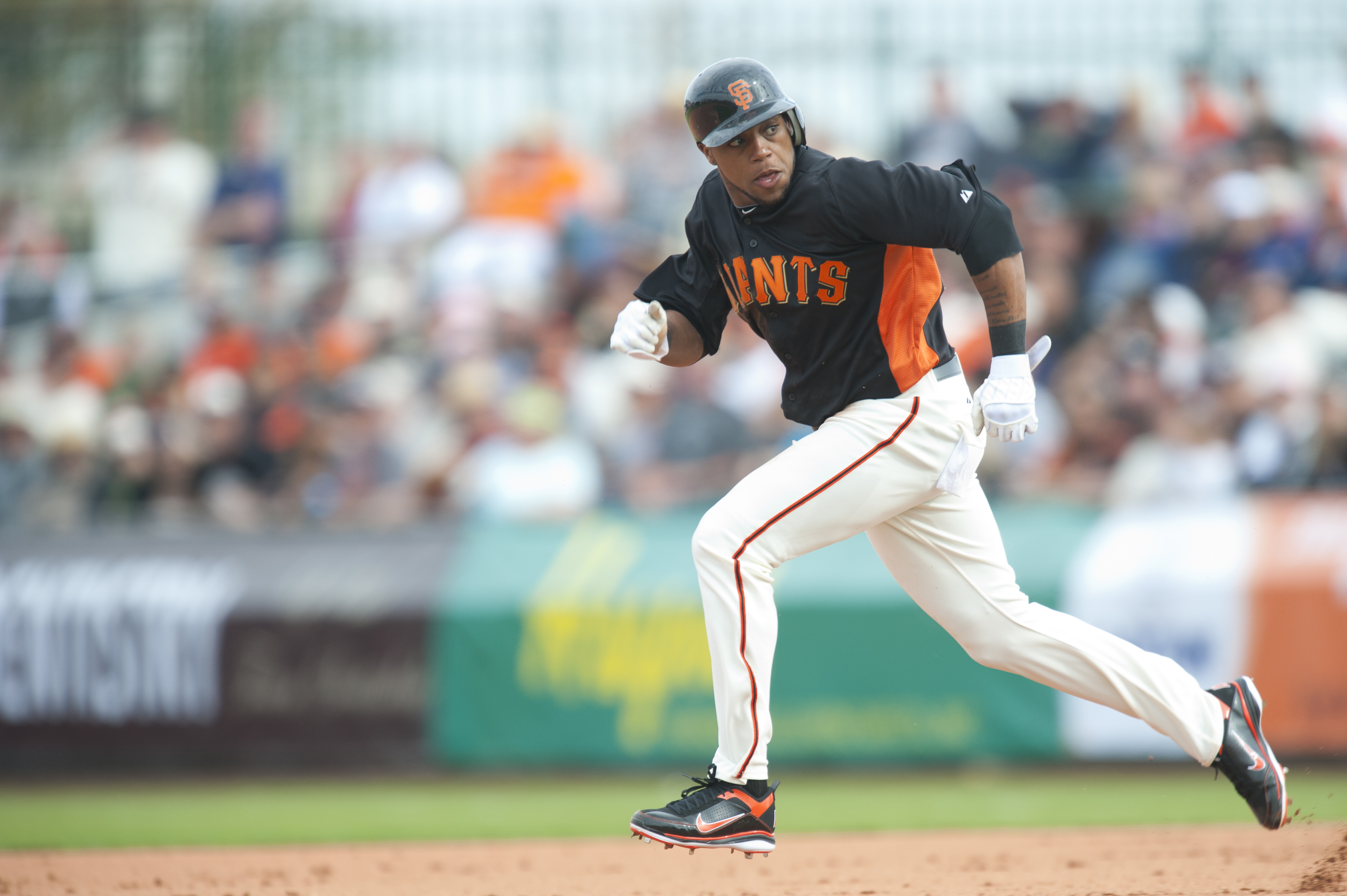 Sorry kid—gonna have to develop the other facets of your game if you want to run with this crowd. 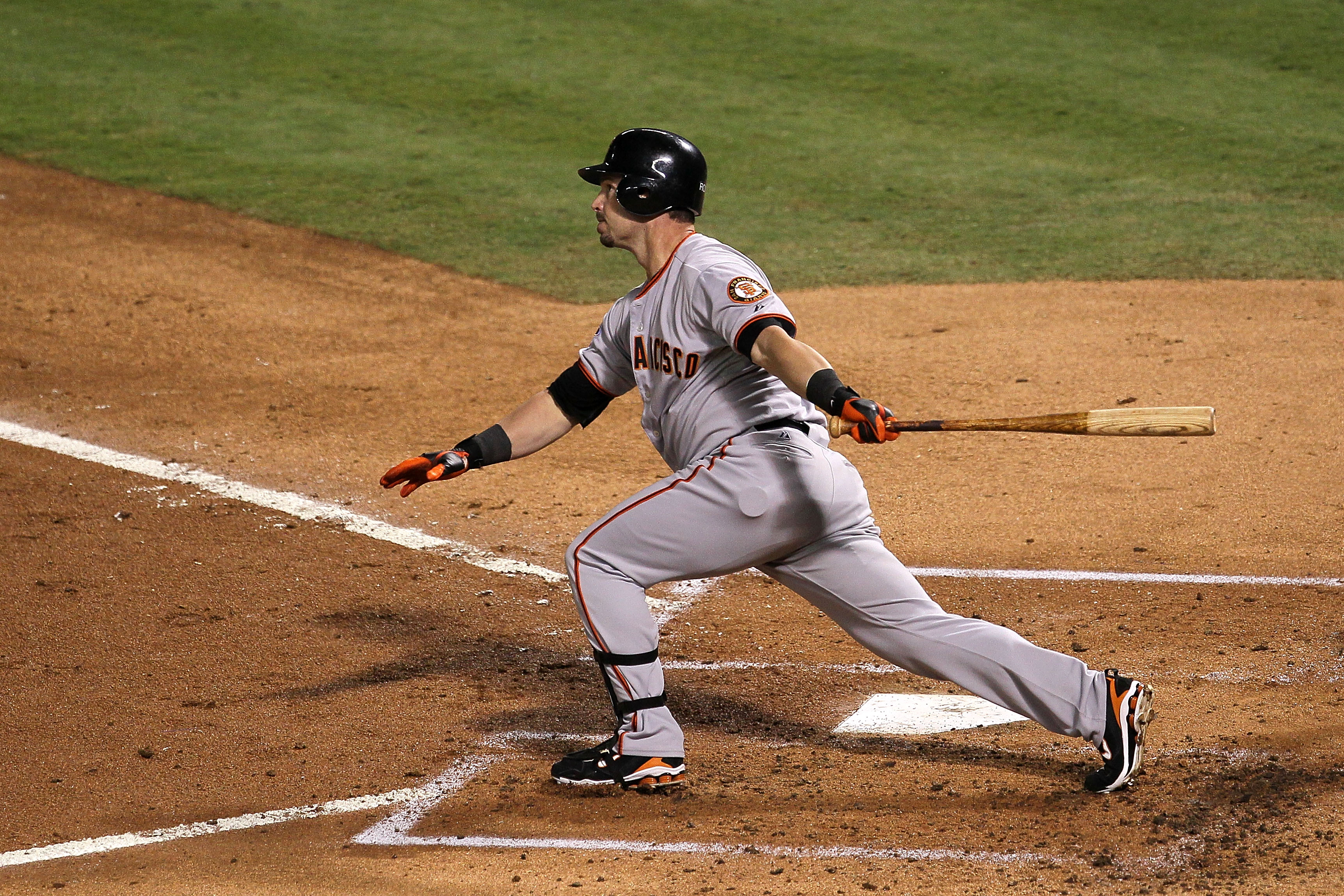 Rowand managed to ante up during the 2010 postseason after a brutal regular-season campaign, contributing in his own small way to the World Series title.

Even so, you'd be hard pressed to find a member of the San Francisco fanbase who would describe the $24 million and two years left on Aaron's contract as anything more flattering than an incontinent albatross circling the club.

Oh, and Bruce Bochy's said that Row won't play anything but center for the Gents.

Ladies and gentlemen, meet your $12 million a year backup!

Logic says Rowand will see a little of the corner spots if Andres Torres offers up an encore to his '10 performance just to keep the rust at bay, but he isn't a realistic candidate for regular duty. 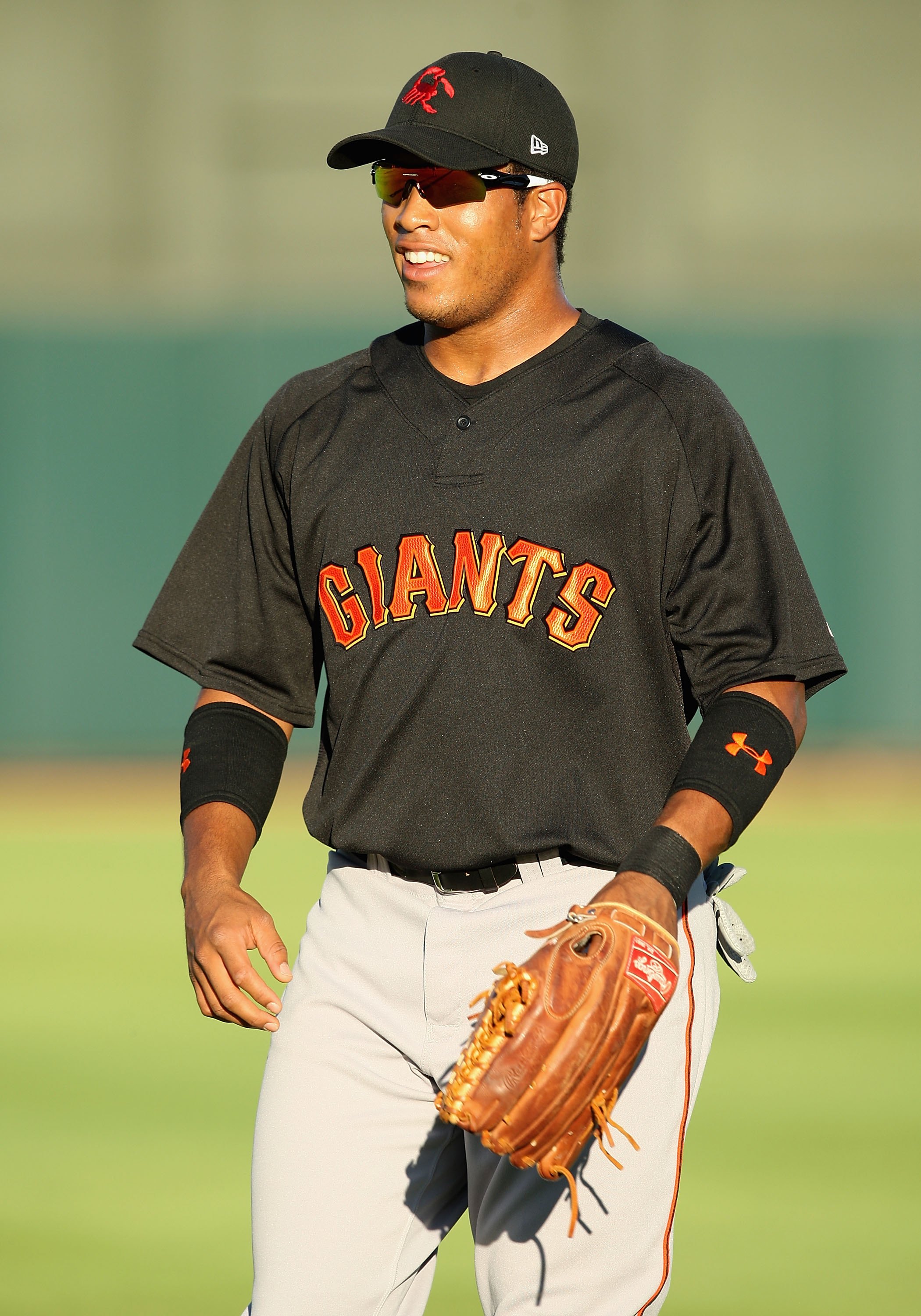 Thomas Neal is a 23-year-old prospect to watch.

He shredded High-A ball in 2009 and put up a productive year at AA for Richmond in 2010, posting a .291/.351/.440 slash line while whiffing 94 times in 585 plate appearances. Those are all encouraging signs for a ballplayer as green as Neal, who was inked right out of high school in 2006 and played in only 10 games the next year.

However, the key words from that first sentence are "to watch."

If the kid forces his way into the regular conversation this year, it'd be a monumental surprise to everyone involved (not that Neal would admit it). 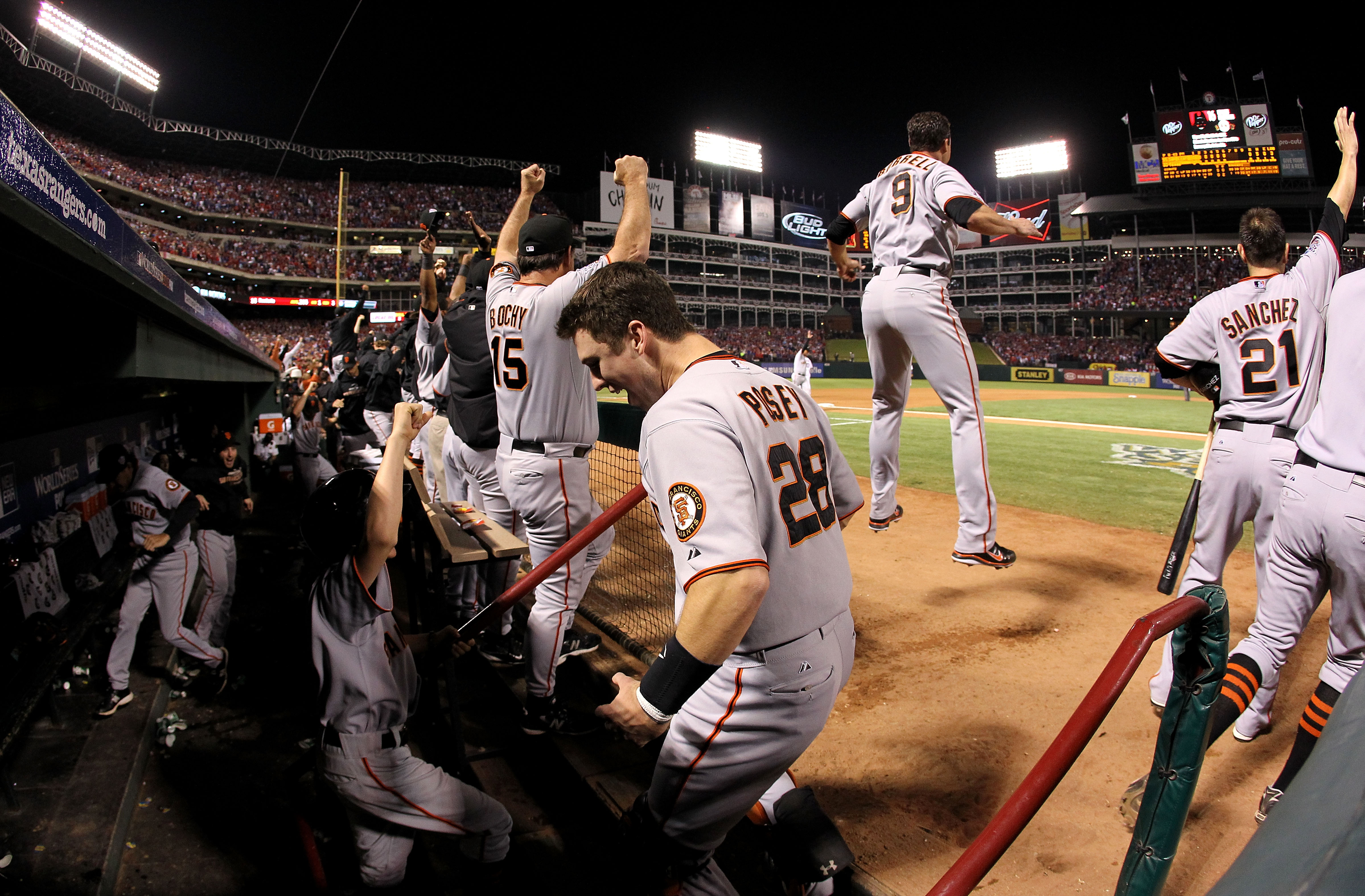 I think even Burrell would tell you he didn't take the self-crafted and severely-discounted contract with San Francisco to be an everyday player.

A regular outfield spot simply isn't realistic for Pat, as he's firmly in the sunset stage of his career. The seasoned vet can still flash one of the better and more accurate arms on the club, but his mobility was never a selling point in his prime, and that "asset" hasn't appreciated.

Additionally, the suspected Machine showed a knack for enormous regular season at-bats down the stretch in 2010, but he can be afforded those opportunities in a reserve role.

Burrell's real value—and it's a substantial one—is to help engender and maintain positive clubhouse chemistry, arguably the most underrated weapon in a professional baseball team's arsenal.

It's a role he appears to relish and plays exceedingly well.

Which is why you won't find a more beloved author of an 0-for-13 World Series performance (with 11 K).

The opening day lineup might have Pat the Bat in left field, but that's not where he'll be found in most games this season. 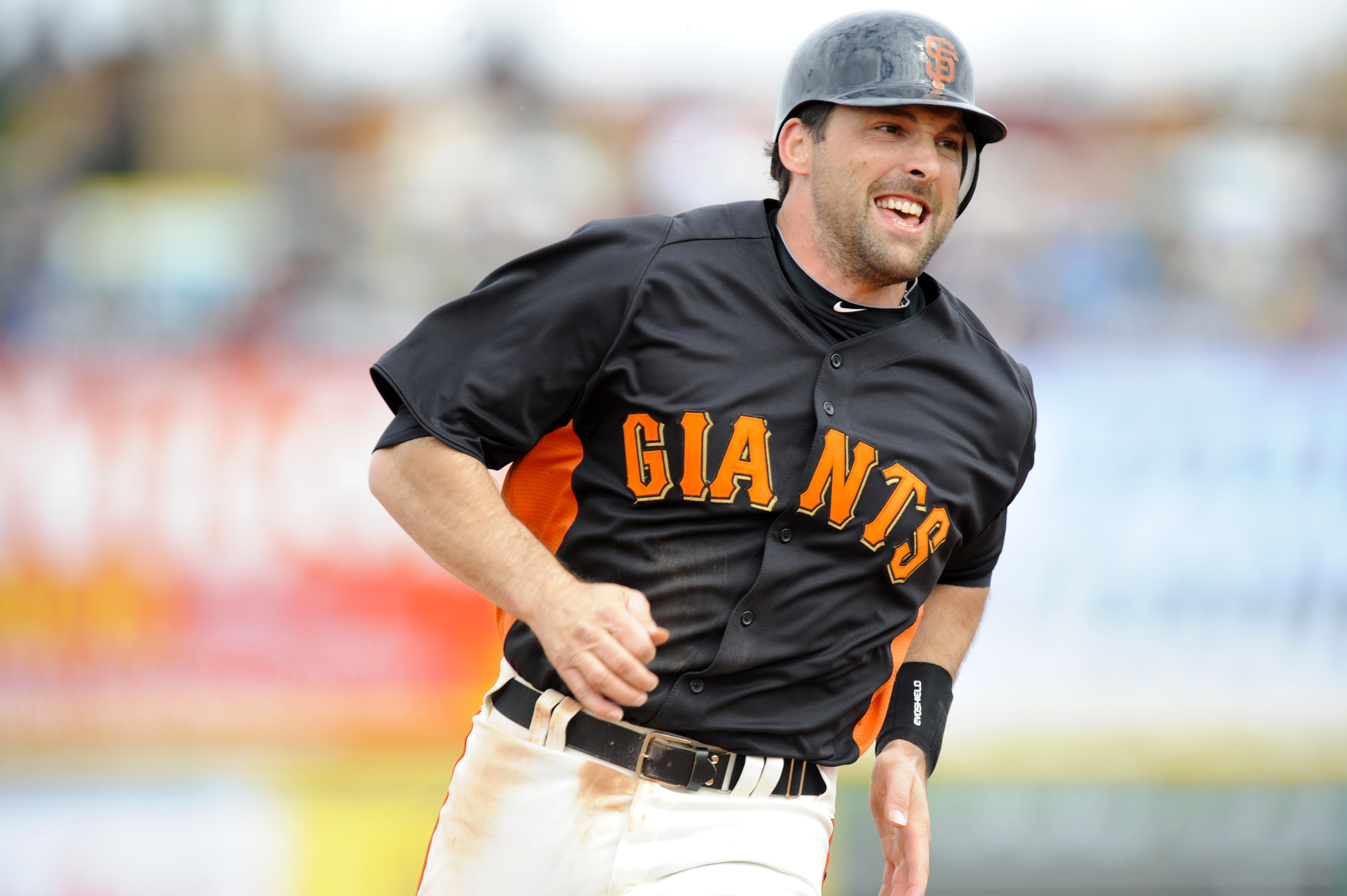 Those numbers won't set anyone's world afire, but they'll do in an offensive pinch.

Unfortunately, DeRosa's stint with San Francisco has been an injury-fueled bust. In fact, it's been so ugly that I refuse to inflict his orange-and-black numbers on you, fair reader.

Whispers around the desert have Mark feeling healthy and proving it in the batter's box. Even the picture above is a telling sign; I'm not sure we saw a single smile—even a grimacing one—from DeRosa in 2010.

Put it all together and what you get is the picture of an athlete on the rebound, and a useful one. If the return to pseudo glory is for real, the 35-year-old is still spry enough to patrol the big green. True, manager Bruce Bochy is on the record saying DeRosa will get the majority of his spring reps in the infield, but the record can change.

Especially if the player forces the issue.

Expect Mark DeRosa to give Boch something to ponder at the very least. 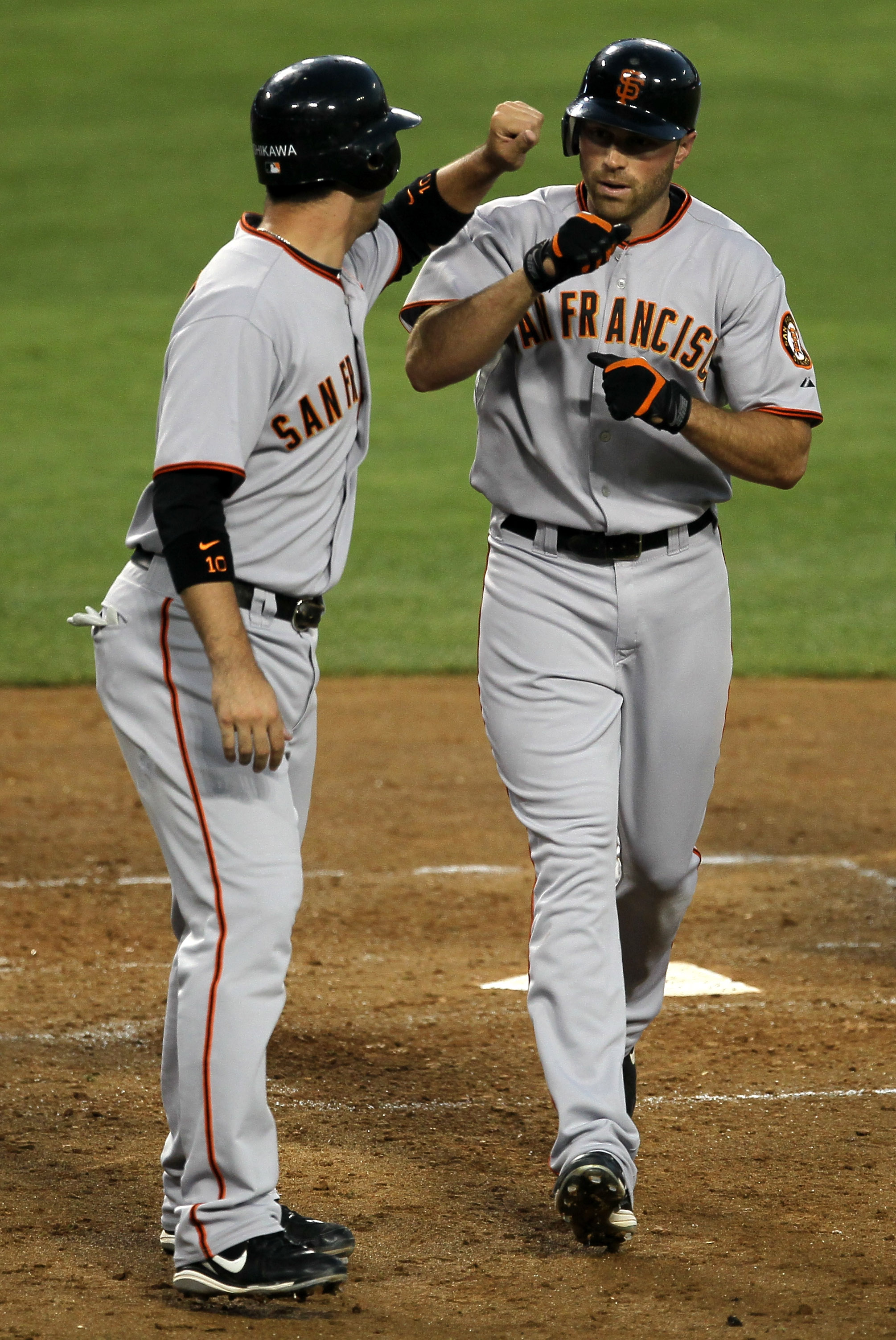 Quick, how old is Nate Schierholtz?

If you answered 27, give yourself an orange-and-black star because that's exactly right, and it's not 27-going-on-28. Nope, Schierholtz just celebrated No. 27 in February, so it's newly minted.

I mention these details because Giant fans have been waiting on Nate the Great to prove it for a while now. Patience is never a fanbase's virtue, so two disappointing years can feel like five or six, adding temporal wear-and-tear to a player that doesn't actually exist.

Such is the case with the aging-but-not-aged Giant prospect—even the franchise is considering cashing out on the hype despite a relatively modest number in the age column (Schierholtz's name has popped up in trade discussions) so you know the fans are getting antsy...or homicidal.

And still, the potential tantalizes.

This is already a four-tool player with the only AWOL tool being a serious power stroke, but there's even a hint of that if you watch closely.

Let's break out an old baseball chestnut in honor of the first few weeks of spring training—the ball jumps off Nate's bat. With a little more bulk and some regular ABs, I wouldn't be surprised to see the thump arrive to join speed, superb defense, a rifle arm and an effective contact stroke in Schierholtz' toolbox. Lightning-quick hands are more than half the power battle, and Nate's got those in spades.

You never know when an individual is going to put it all together; we've seen it happen to guys with a fraction of the talent Nate the Great boasts.

If he does click, Nate Schierholtz will run away with the job.

Unless he gets traded first. 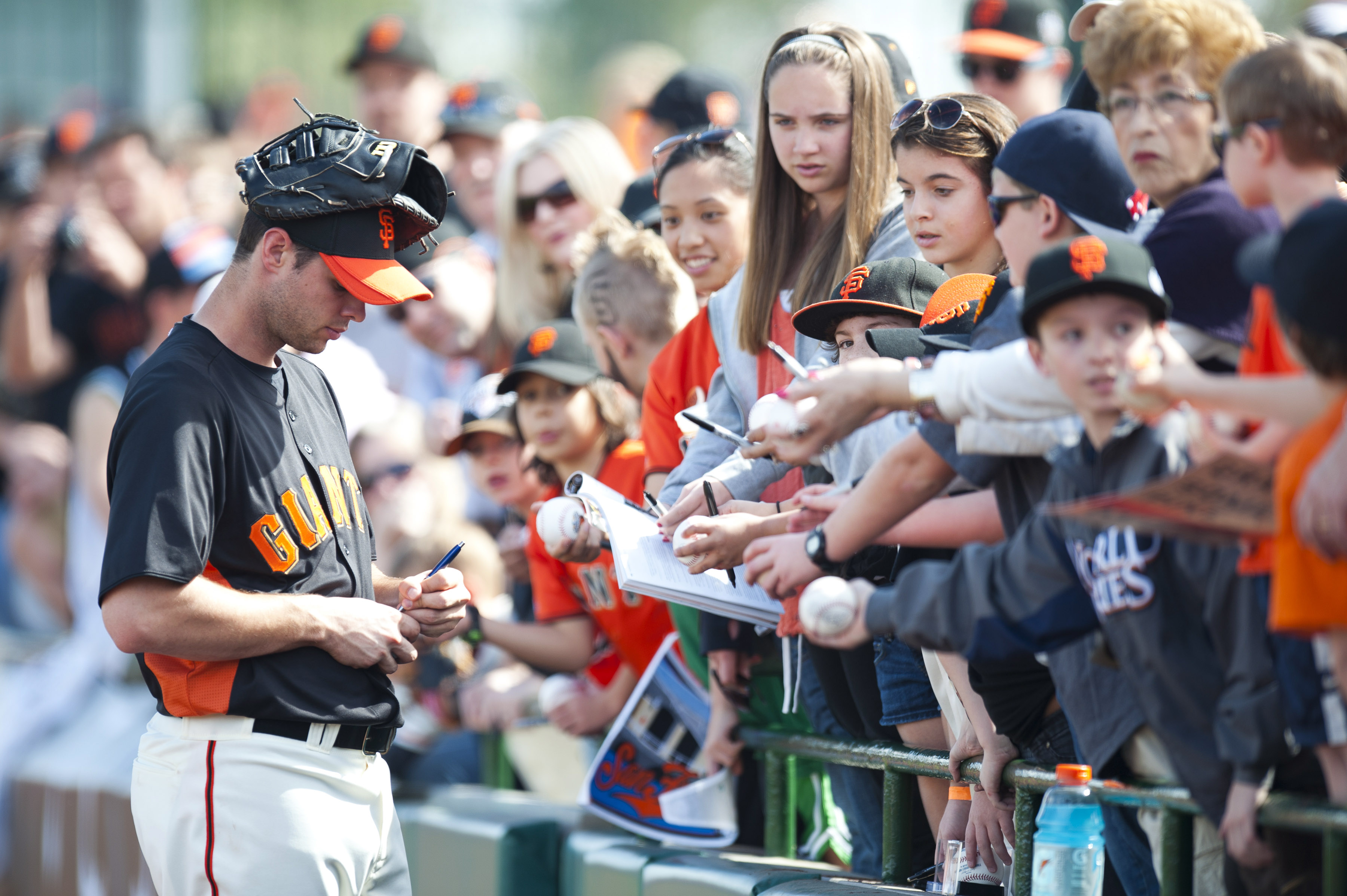 If you're confused as to why you're staring at a picture of first-base prospect Brandon Belt instead of Huff, allow me to explain.

At the moment, Aubrey Huff's name is etched in stone next to first base—arguably the heart and soul of the upstart Giants in 2010, the burgeoning country western singer has done nothing to threaten his grip on a regular gig.

Rest assured, Huff will be in the starting lineup as long as he's healthy in 2011.

But Aubrey's versatility is as deep as it is broad—the man with the golden pipes and splendid splinter can also do a variety of things within the confines of the diamond. As he demonstrated in '10, above-average outfield defense is a staple of his repertoire.

Which brings us to Belt (what a name for a born hitter).

By all accounts, the kid is taking to spring training competition like a fish to water. Obviously, there are many a slip 'twixt exhibition and the real thing, but they mainly plague the batter's box, and that is Belt's strength. In '10, he moved from High A to Double-A to Triple-A, and his on-base percentage never dropped below .393.

He had a little hiccup in the average department upon his promotion to Triple-A, but it was probably more a product of the limited exposure (61 PA) than a deficiency in ability.

Consequently, if he can establish a defensive foothold in the Show defensively via the exhibition trial, there is a much better chance of seeing him sooner rather than later. San Jose Mercury beat writer Andrew Baggarly gave a small but significant nod of praise to the youngster for his glove work.

His point is an excellent one—most professional athletes have the ability to play effective defense; it's the mentality or awareness that they lack. If Baggs' report is an omen of things to come rather than an isolated incident of being lucky rather than good, you can expect to see Brandon Belt with the big club before the season is too old.

That means my money is on Aubrey Huff to be the regular left fielder before the year's over.

Hey, if Buster Posey can do it, why not Brandon Belt?

**Click Here to Learn More About the Paralyzed Veterans of America**