Los Angeles Dodgers: The 10 Best Opening Day Performances of the Past 25 Years 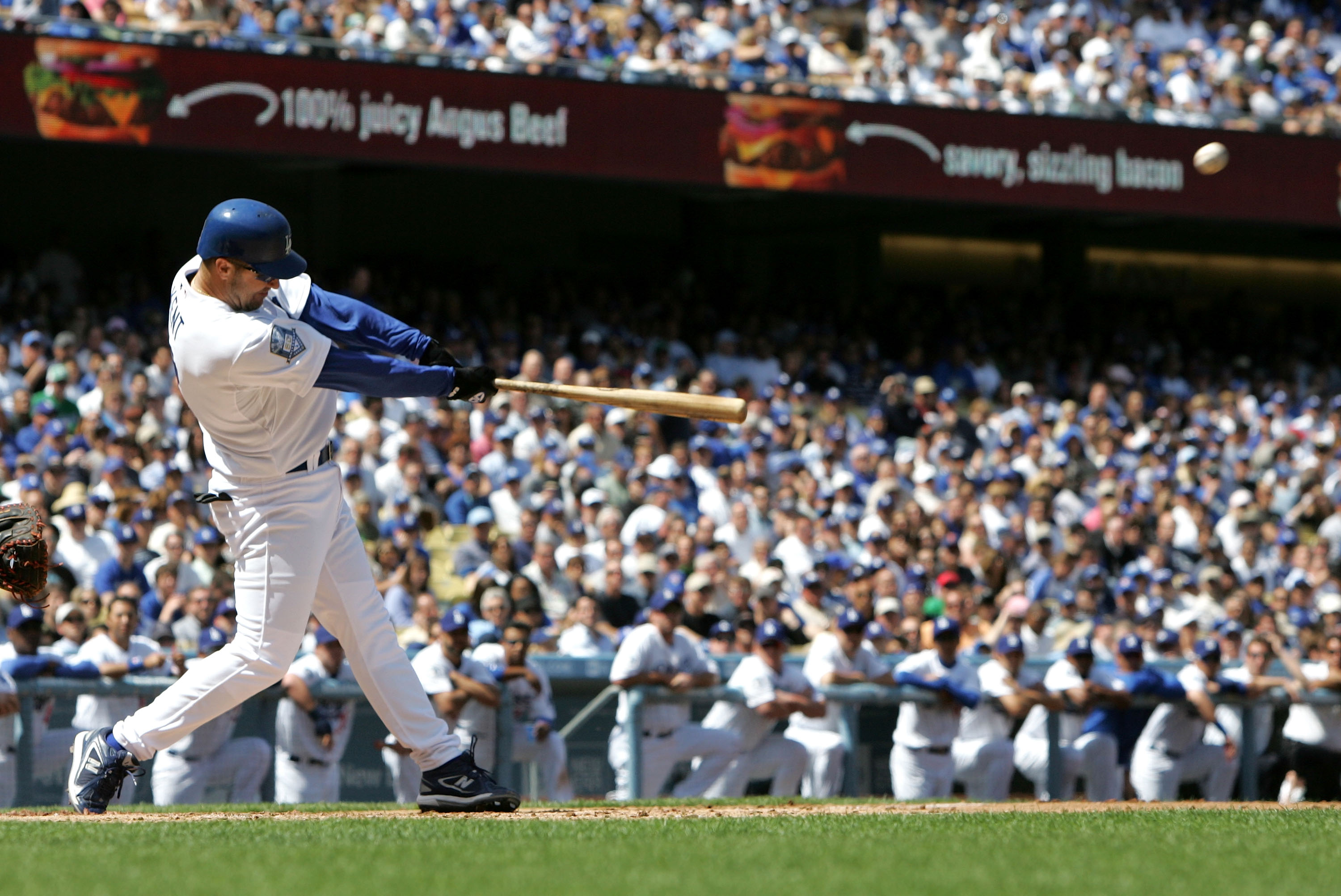 With spring training set to begin in a few short weeks and Opening Day less than two months away, fans of the Los Angeles Dodgers can't help but feel a tingle of anxiety knowing that baseball season is only just around the corner.

Headed by skipper Don Mattingly, the 2011 coaching staff is almost entirely brand new, while multiple moves made by general manager Ned Colletti have filled several gaps in the roster. Although a number of fans remain pessimistic as Frank McCourt barely holds on to his regime as owner, the majority see 2011 as a fresh opportunity for the Boys in Blue to become contenders once again.

The home opener in 2009 was truly something special. Second baseman Orlando Hudson impressed the entire baseball world by hitting for the cycle in his first home game as a Dodger. Chad Billingsley was brilliant on the mound, surrendering only five hits and one earned run while striking out 11. The remainder of the Dodgers lineup had an offensive field day against future Hall of Fame pitcher Randy Johnson, as Los Angeles routed the San Francisco Giants, 11-1.

Despite all the glory, Dodgers fans were forced to wait an entire week from the beginning of the season to see their beloved club take the field at Chavez Ravine.

Moving into the 2011 campaign, Dodger Stadium will play host to Opening Day for the first time in three years. And what's more fitting is that Los Angeles will battle long-time rival and 2010 World Champion San Francisco Giants. The sellout crowd on-hand will promise to be nothing short of electrifying.

As a prelude to the clash with the Giants on March 31, the following slides highlight the 10 best individual Opening Day performances by Dodgers players over the past 25 years. Fasten your seat belts and enjoy a quick ride through a quarter-century of Dodgers history. 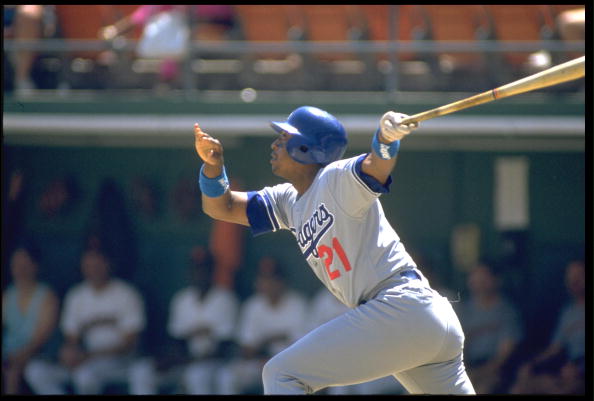 In the first game of the 1990 campaign, the Dodgers hosted San Diego as Padres ace Bruce Hurst faced off against Orel Hershiser in what promised to be an exciting start to the season.

Down 2-1 with two outs in the bottom of the eighth inning, with Alfredo Griffin aboard at third and Willie Randolph on first, Los Angeles right fielder Hubie Brooks rocketed a home run deep to left field which sealed the 4-2 win for the Dodgers.

Although Hershiser pitched a strong six innings, John Wettleland was the pitcher of record and picked up the win for Los Angeles. Don Aase threw a scoreless ninth to earn the save.

Brooks also added a single in the seventh and scored on a sacrifice fly by third baseman Jeff Hamilton.

1990 was the only year the Los Angeles native would spend with the Dodgers during his 15-year career. Later that winter, Brooks was traded to the New York Mets for Greg Hansell and Bobby Ojeda.

Los Angeles finished 86-76 in 1990 under manager Tommy Lasorda—good enough for second place in the NL West. 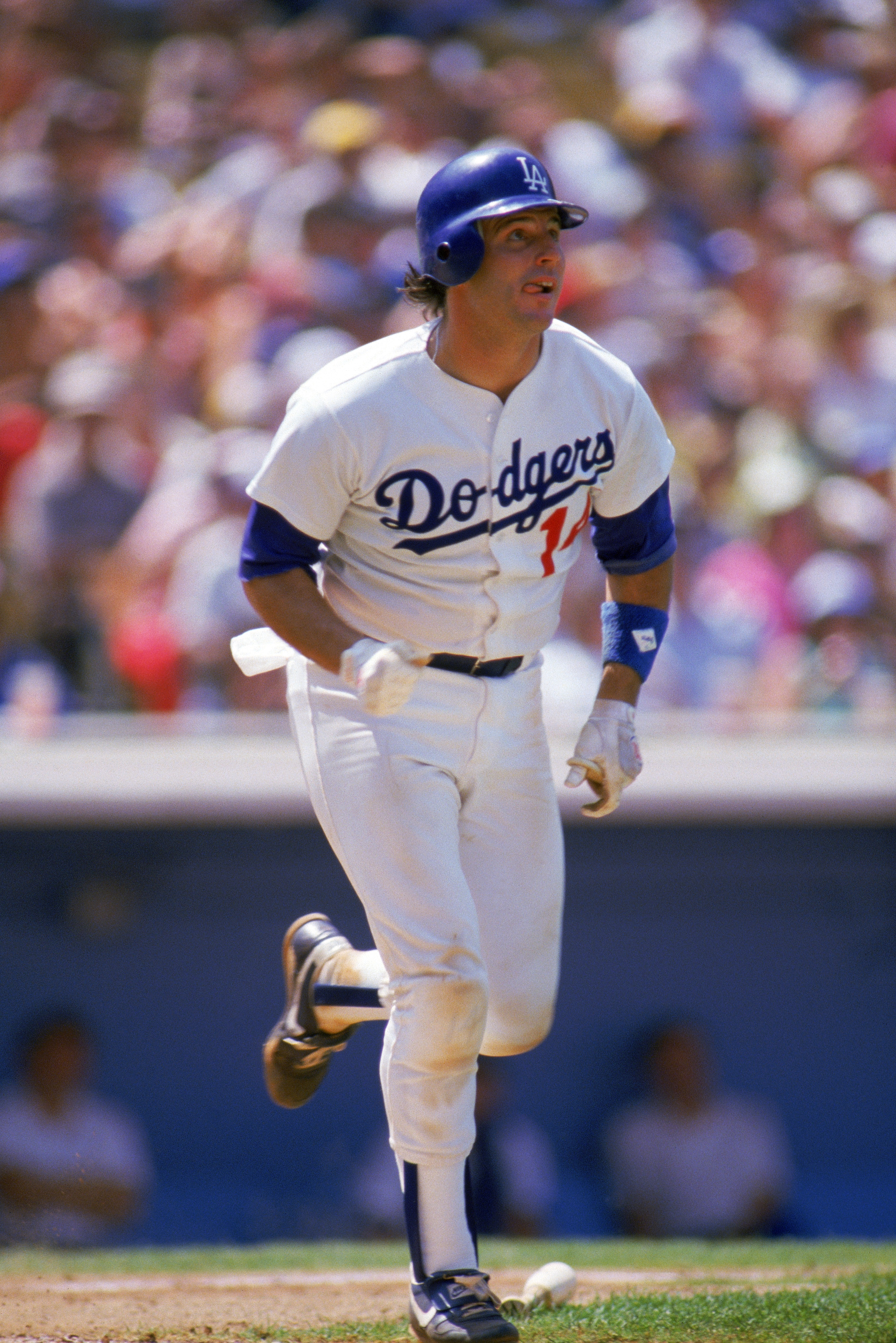 The Dodgers traveled to Atlanta's Fulton County Stadium for their initial game of the 1991 season, as Tim Belcher started for Los Angeles and John Smoltz took the hill for the Braves.

Batting seventh in the Dodgers' lineup, catcher Mike Scoscia went 3-for-4, including a double, an RBI, and one run scored. Scioscia's run in the top of the fifth tied the game at two, and his single in the top of the seventh scored Eddie Murray, providing an insurance run in the 6-4 victory.

Belcher notched the win, and John Candeleria recorded the final five outs to earn the save. Smoltz was the pitcher of record for the Braves.

Darryl Strawberry also added an RBI double of his own in the top of the fifth for the Dodgers.

The Dodgers compiled a record of 93-69 in 1991, and finished second in the division for the second straight year. 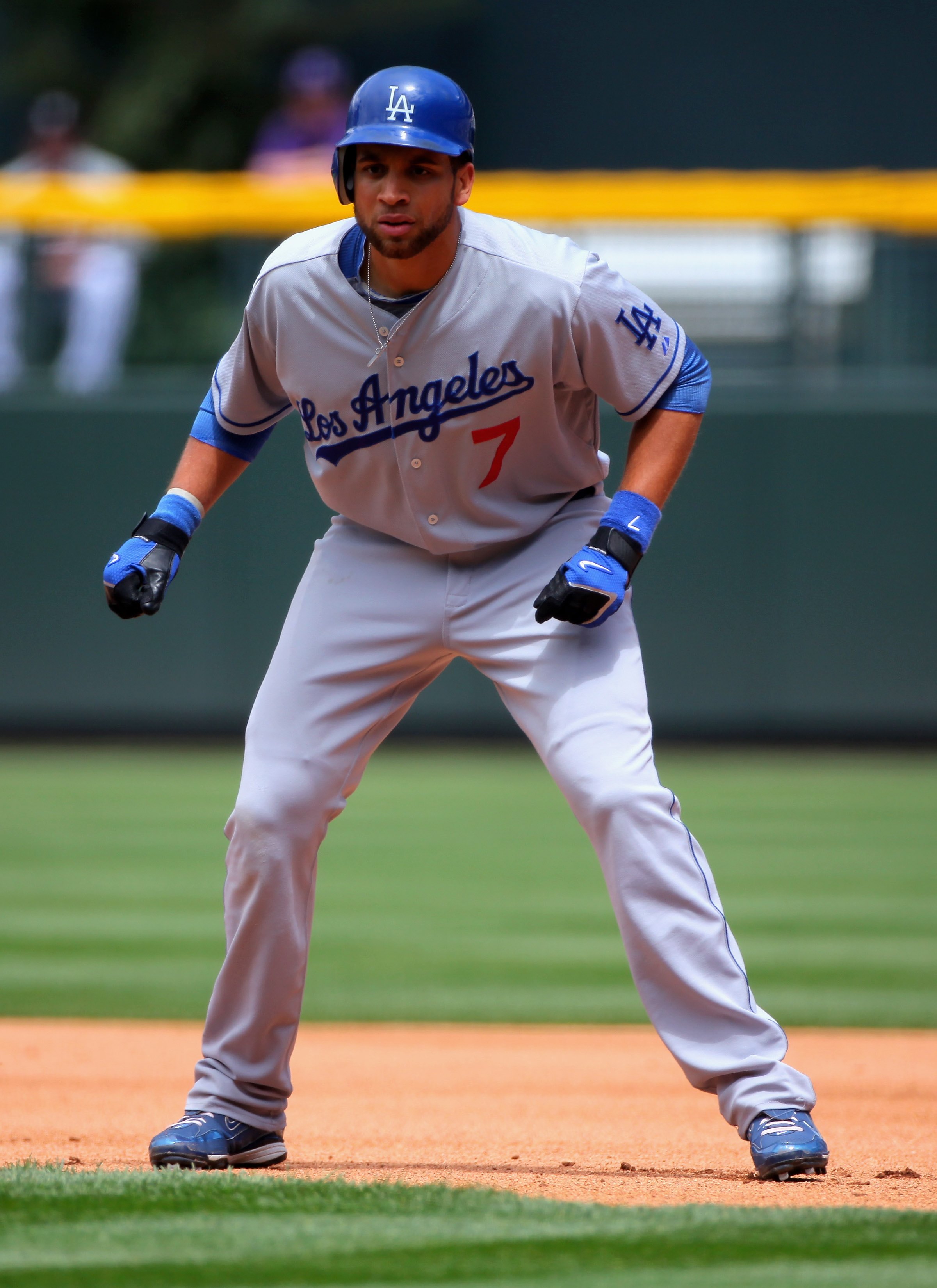 In the 2009 season opener at Petco Park in San Diego, the Dodgers came out of the blocks early offensively and defeated the San Diego Padres, 4-1.

James Loney contributed three hits for Los Angeles, the first being a two-run single in the top of the first inning which put the Dodgers ahead to stay. Loney also showed his deceptive speed by stealing a base in the top of the third on a Jake Peavy pitch which saw Casey Blake strike out swinging.

Hiroki Kuroda recorded the win for the Dodgers, while Jonathan Broxton shut down the Padres in the ninth to earn the save. Peavy took the loss for San Diego. 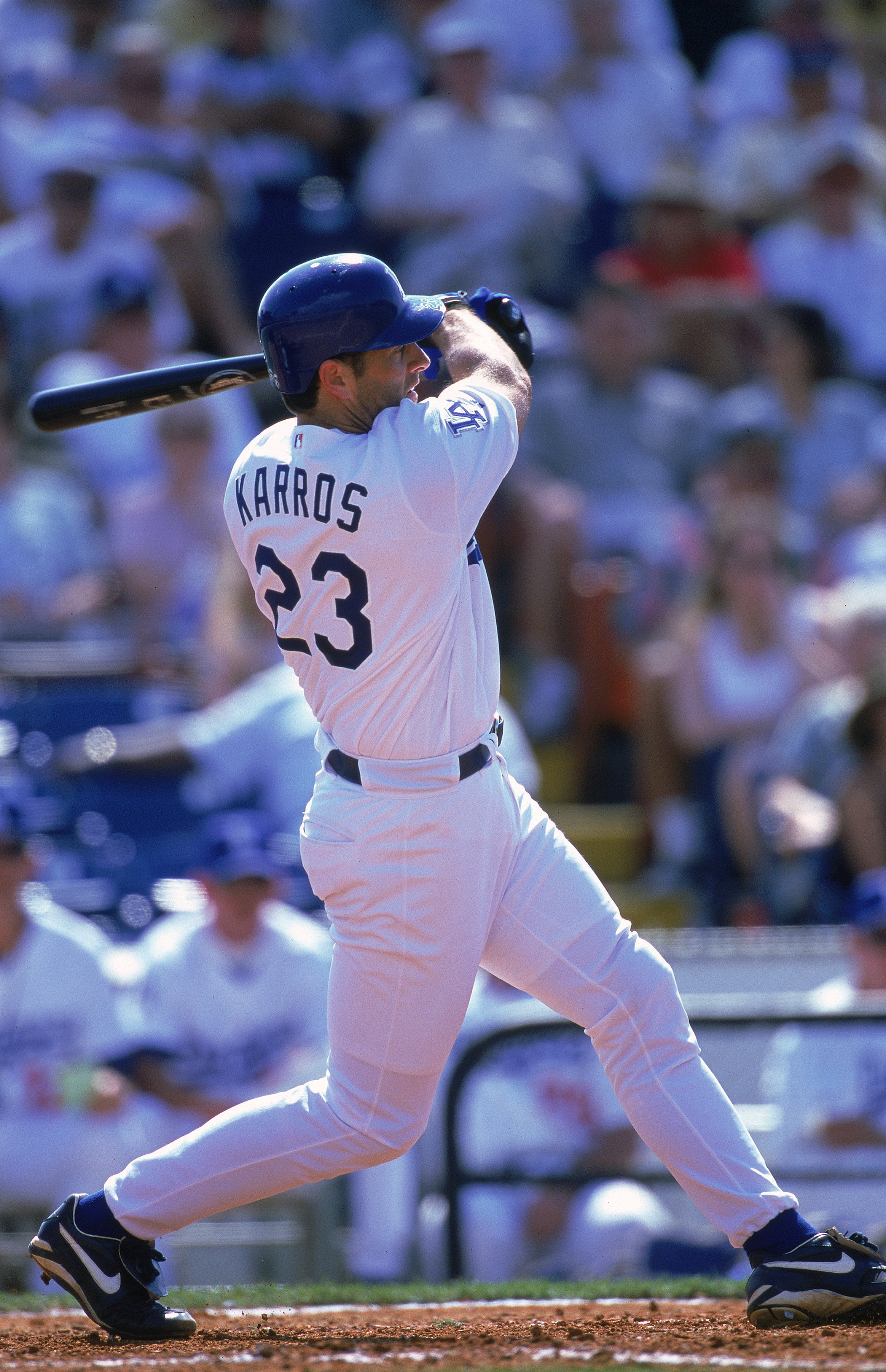 Nothing's more spectacular than a grand slam on Opening Day, and first baseman Eric Karros provided just that in the year 2000 as the Dodgers defeated the Expos 10-4 at Stade Olympique in Montreal.

Kevin Brown threw six solid innings for Los Angeles to record the win, and Terry Adams finished the final three innings to earn the save. Dustin Hermanson took the loss for Montreal.

Among his three hits, catcher Todd Hundley also added a home run for the Dodgers, while left fielder Gary Sheffield contributed a single, triple, and two RBI of his own.

Guided by manager Davey Johnson, Los Angeles finished the year second in the NL West with an 86-76 record. 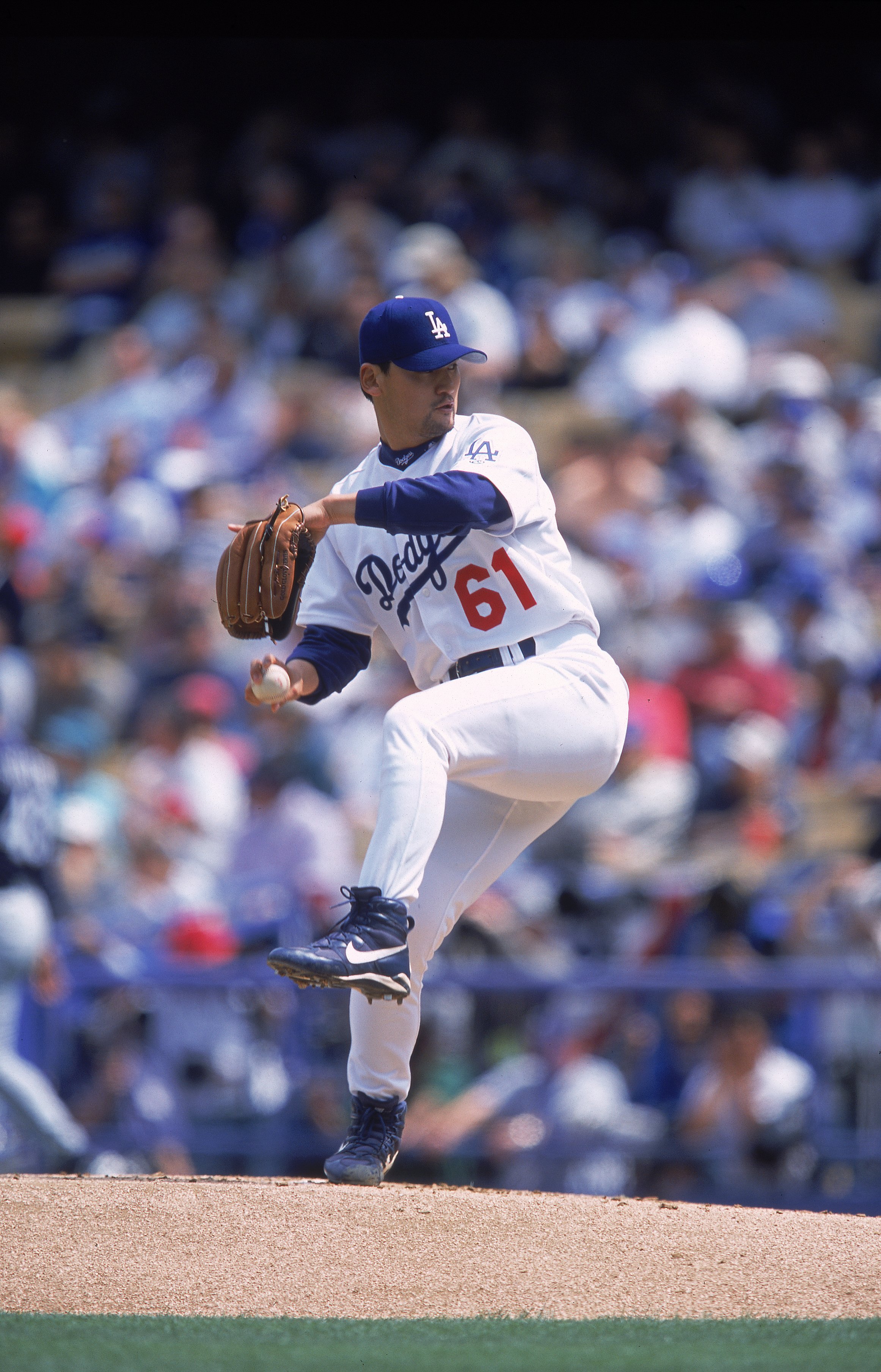 In what turned out to be a tightly contested pitcher's duel, Chan Ho Park took the mound for Los Angeles and Jamey Wright for the Brewers as the Dodgers hosted Milwaukee on Opening Day in 2001.

Left fielder Gary Sheffield was responsible for the lone run of the entire game, having sent a long blast to deep center field in the bottom of the sixth inning.

Park surrendered only five hits and struck out seven in seven strong innings of work to earn the win. Mike Fetters held the Expos in the eighth while Jeff Shaw threw a scoreless ninth to record the save in the 1-0 victory.

The Dodgers would eventually finish in third place in the National League West in 2001 under first-year manager Jim Tracy. 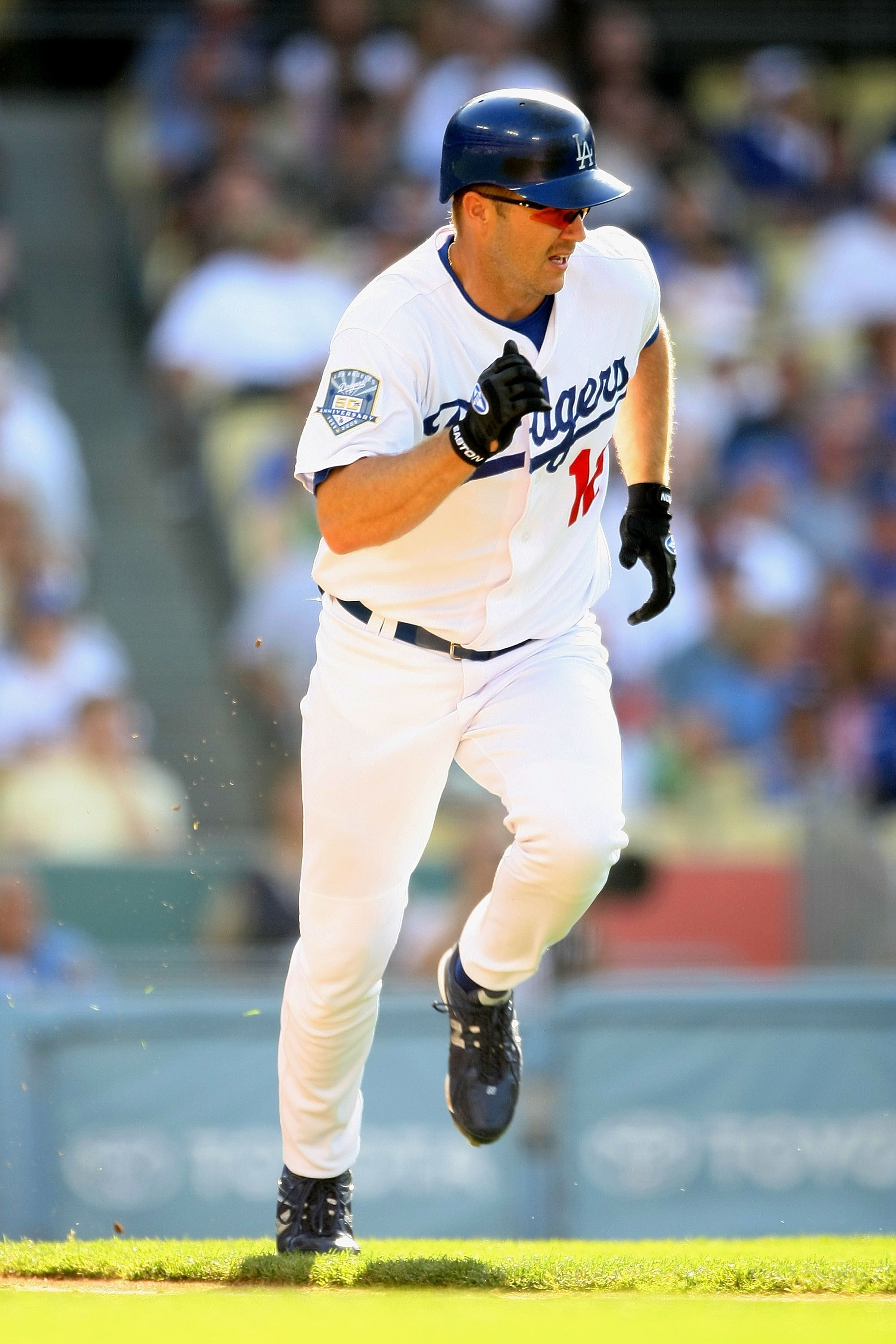 On Opening Day in 2008, Brad Penny of the Dodgers squared-off against Barry Zito of the San Francisco Giants in front of a sold-out crowd of 56,000 at Dodger Stadium.

Second baseman Jeff Kent homered for the second consecutive Opening Day, going deep to left field off Zito in the bottom of the first. Kent went 2-for-3 with one run scored and an RBI in the 5-0 victory.

Shortstop Rafael Furcal also chipped in with three hits for the Dodgers, including a double, one run scored, and an RBI.

Zito took the loss for the Giants after surrendering five runs, eight hits and two walks in only five innings of work.

After finishing second in the NL West with a 84-78 record, the Dodgers earned the National League Wild Card spot under manager Joe Torre, and eventually swept the heavily-favored Chicago Cubs in the NLDS. Los Angeles eventually fell to the Philadelphia Phillies in the NLCS. 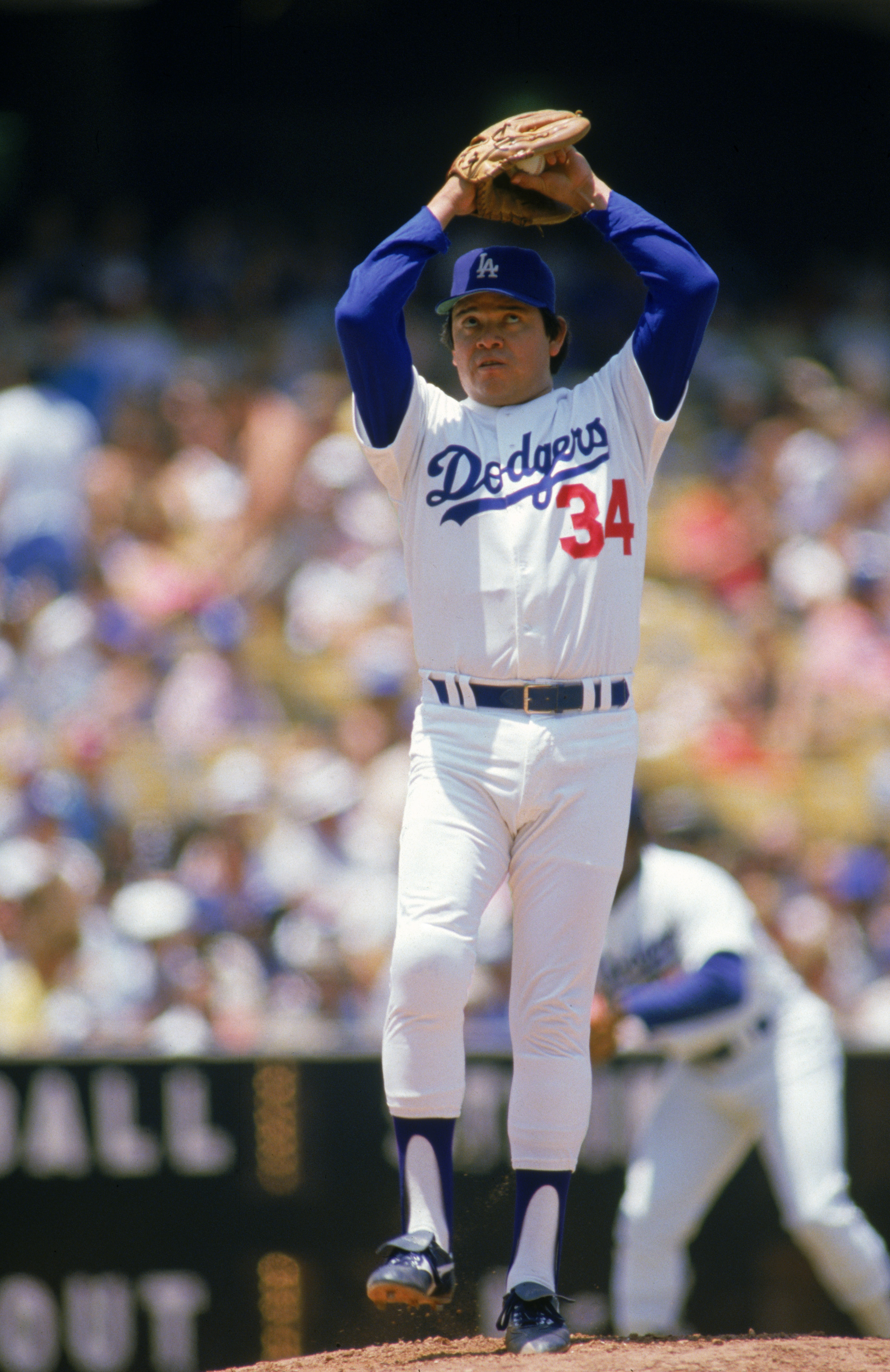 Valenzuela went the distance for the Dodgers, scattereing 10 hits, striking out nine, and surrendering one run in the 2-1 victory.

Show recorded the loss for the Padres.

Los Angeles finished in fifth place in the division in 1986 after posting a 73-89 record. 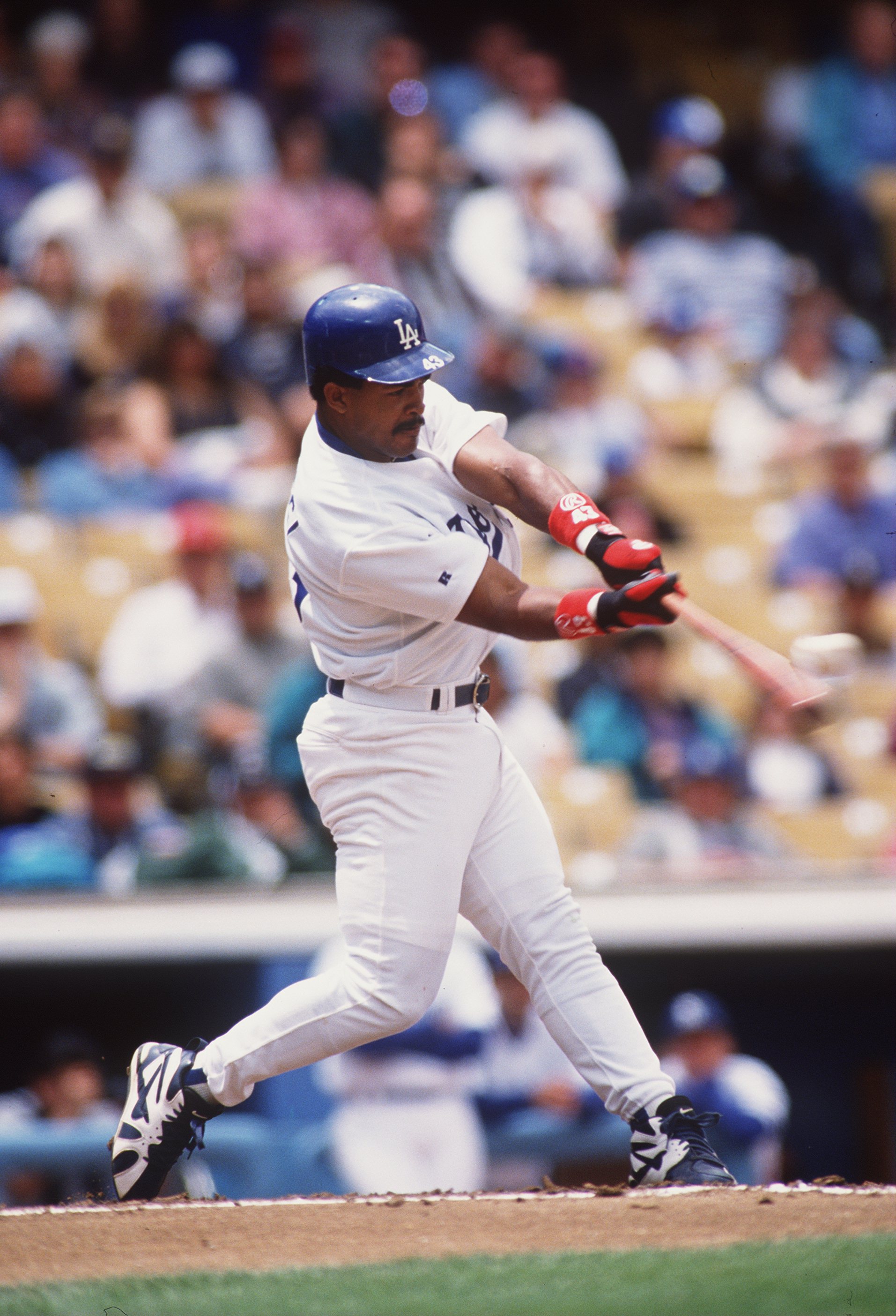 After the cancellation of the 1994 postseason due to the strike, the beginning of the 1995 season started about three weeks later than usual, but baseball was back in business nonetheless.

For the first game of the 1995 campaign, the Dodgers traveled to Miami to face John Burkett and the Florida Marlins.

Dodgers' center fielder Raul Mondesi was totally off the charts that day, finally having the opportunity to unleash his sizzling bat after an eight-month hiatus.

Mondesi finished the day 3-for-4 with four RBI and two runs scored, including two home runs and a double.

Florida rallied late by scoring four runs in the bottom of the ninth, however Los Angeles managed to hold on for the 8-7 victory.

Ramon Martinez picked up the win for the Dodgers, while Rudy Seanez rescued Todd Worrell in the ninth to earn the save. Burkett was the pitcher of record for San Diego.

First baseman Eric Karros also chipped in with a double and two RBI for Los Angeles.

The Dodgers finished in first place in the West with a 78-66 record in the shortened season, but were eventually swept by the Cincinnati Reds in the NLDS later in the postseason. 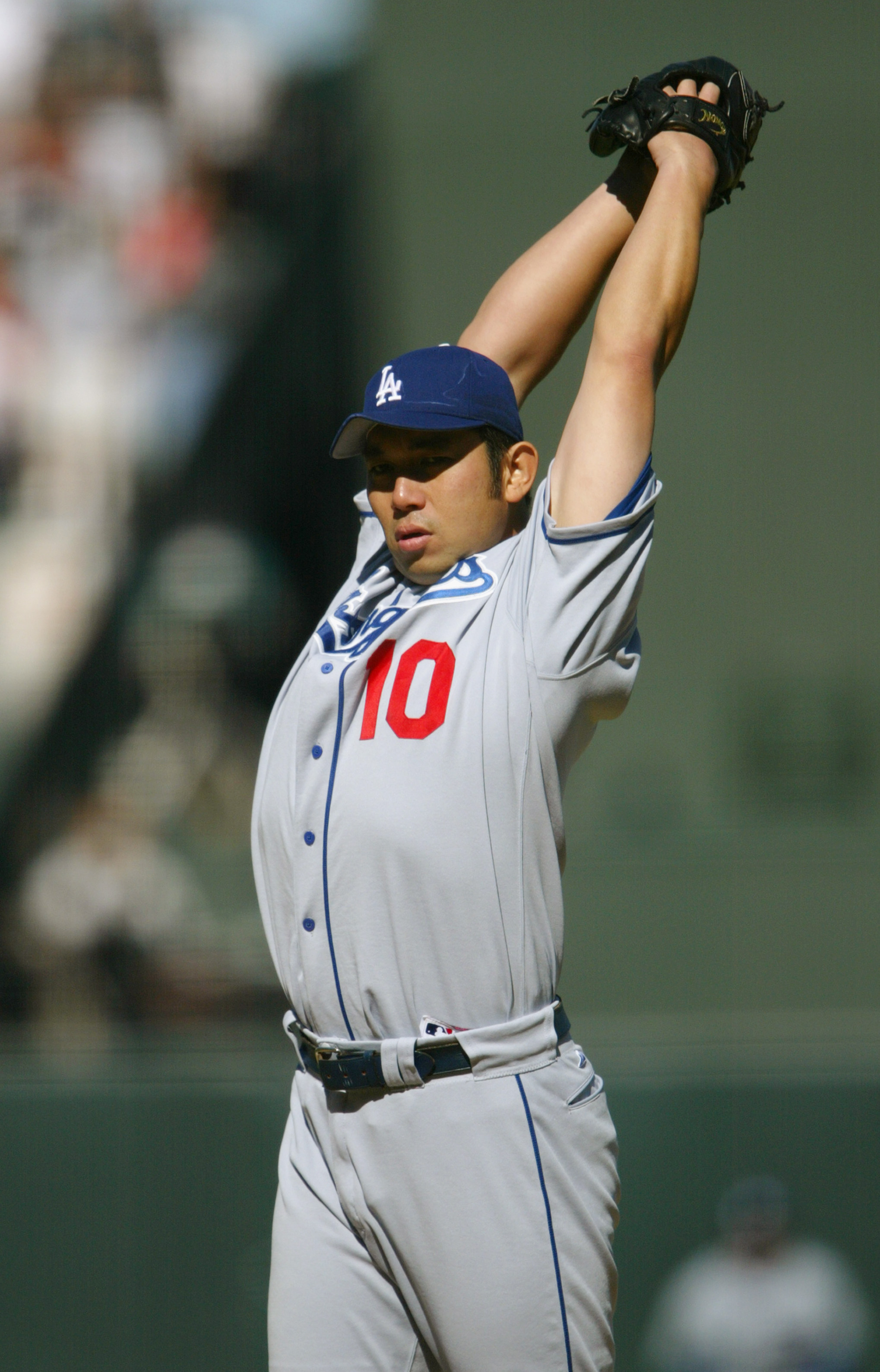 In the first game of the 2003 season, the Dodgers traveled to the desert to face Randy Johnson and the Arizona Diamondbacks.

The story of the day was Los Angeles pitcher Hideo Nomo. The Japanese righty threw nine full innings of scoreless ball, only surrendering four hits while striking out seven in the Dodgers 8-0 victory.

Left fielder Brian Jordan provided a huge offensive boost for the Boys in Blue, having gone 2-for-4 with three RBI and two runs scored, including a two-run HR in the sixth inning off Johnson.

Johnson lasted six and two-thirds innings and took the loss for the Diamondbacks.

The 2003 Dodgers would go on to finish second in the NL West with a 85-77 record under manager Jim Tracy. 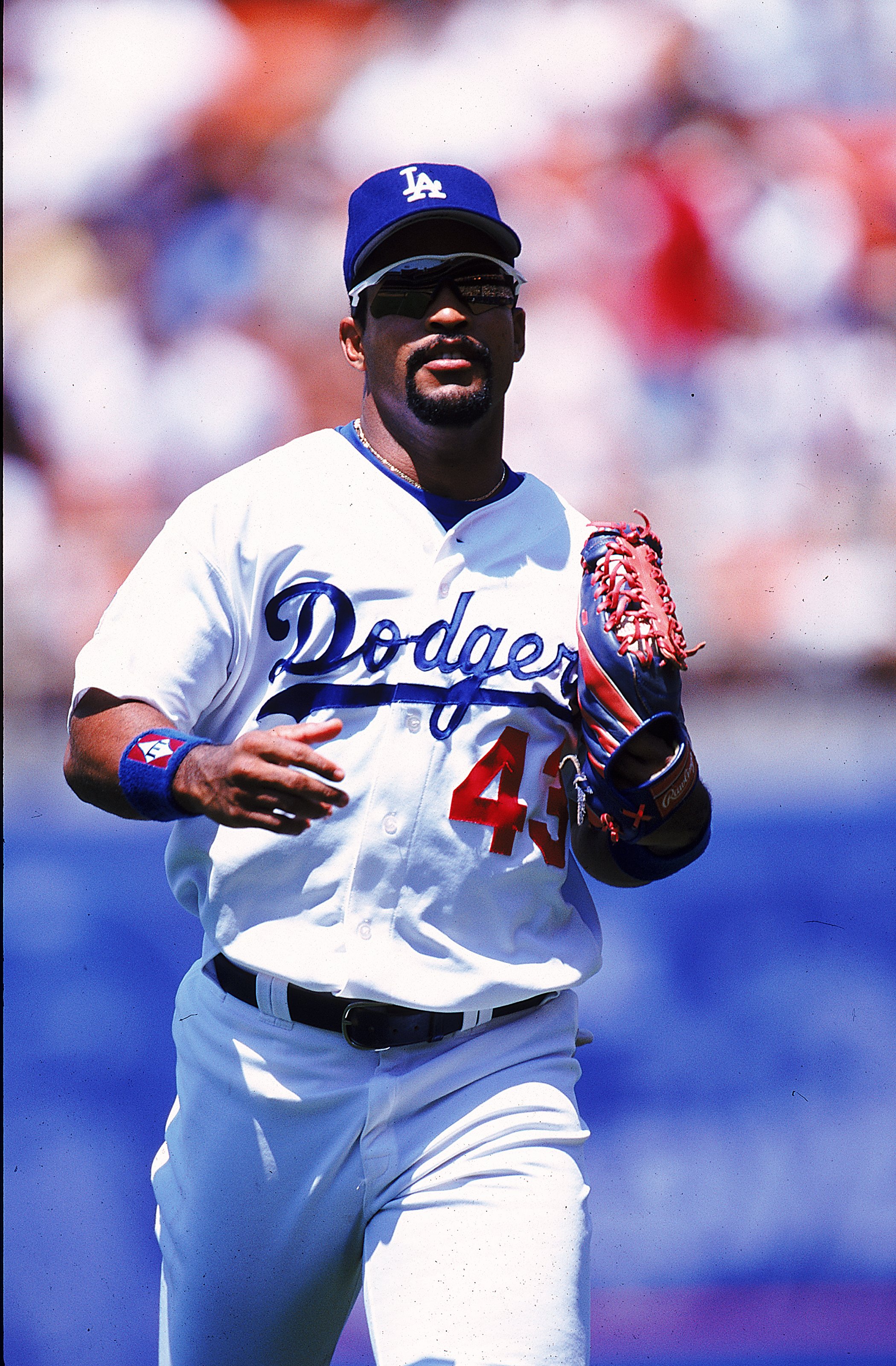 And for the number one spot on the list, Raul Mondesi appears once again after a monster performance for Los Angeles against the Arizona Diamondbacks on Opening Day in 1999 at Dodger Stadium.

It took 11 innings for the Dodgers to defeat the Diamondbacks, as Mondesi's walk-off, two-run blast to deep left field in the bottom of the 11th proved to be the game winner.

Mondesi went 4-for-6 with two home runs, six RBI, and two runs scored in the 8-6 victory.

Jeff Shaw was the pitcher of record for the Dodgers, while John Frascatore took the loss for the Diamondbacks. Kevin Brown lasted five and two-thirds innings for Los Angeles in the much anticipated matchup against Arizona ace Randy Johnson.

The Dodgers finished third in the division in 1999 after posting a 77-85 record under manager Davey Johnson.