2011 NFL Mock Draft: Who the Oakland Raiders Should Keep an Eye On 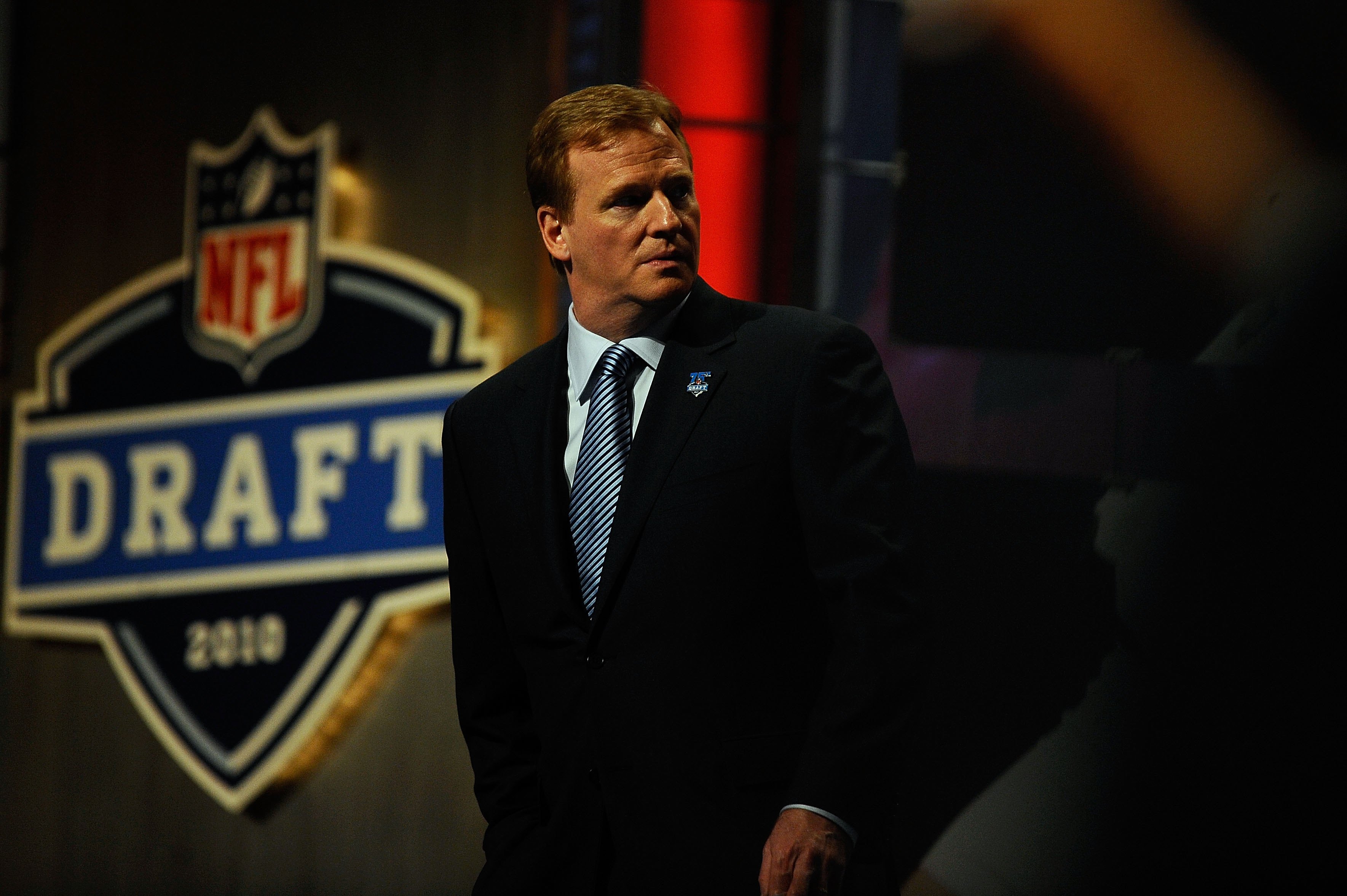 As the 2011 NFL Draft comes closer and closer, it's no secret that the Oakland Raiders' fans get excited.  While we don't have a first round pick this year after trading it to New England, it's still an exciting process seeing as the Raiders make some of their best choices in the later round.

In the past couple years, we've drafted Zach Miller, Michael Bush, Louis Murphy, Jacoby Ford, Tyvon Branch, and Jared Veldheer.  All players who weren't selected in the first round, but in the second or later rounds.

This upcoming off-season could possibly leave the Raiders without some of their key players such as Nnamdi Asomugha, Zach Miller, Michael Bush, Richard Seymour Kamerion Wimbley, and Michael Huff.

This list is made up of players who have been projected to leave mid-round who the Raiders should consider drafting. 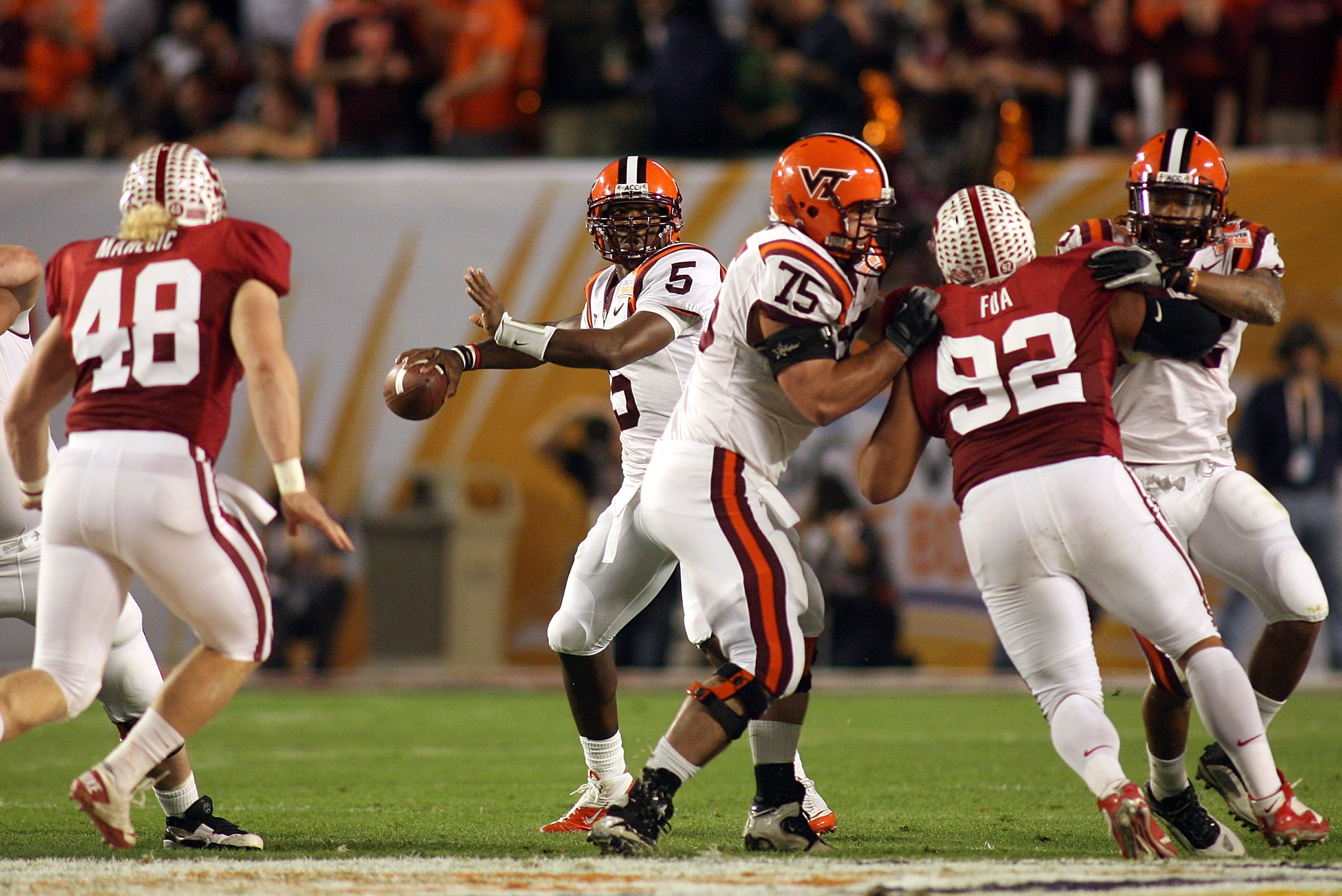 Ok, I admit, this is kind of a guilty pleasure pick.  For a while now, I've been hoping for a mobile QB that has the ability to play in a spread or any other college type offense.

We obviously have the type of players for a college type offense.  Darren McFadden is skilled at quarterback, and Michael Bush isn't that bad at passing either.  We have the receivers that can stretch the field.

We should definitely consider drafting Taylor.  His style is similar to that of Jason Campbell - pass first, run only when needed.  Not to mention, our back-up quarterbacks are horrible.  Kyle Boller does not have what it takes to step in and play like a starter.  Bruce Gradkowski, while being a fan favorite, is not that great of a quarterback.  He has great energy and fire, but his noodle-arm and lack of big play ability severely hurts our team.

Seeing as how often Campbell was hit and injured, it's always good to have an insurance plan.  Having Taylor step in and basically replicating Campbell's style of play is not a bad idea. 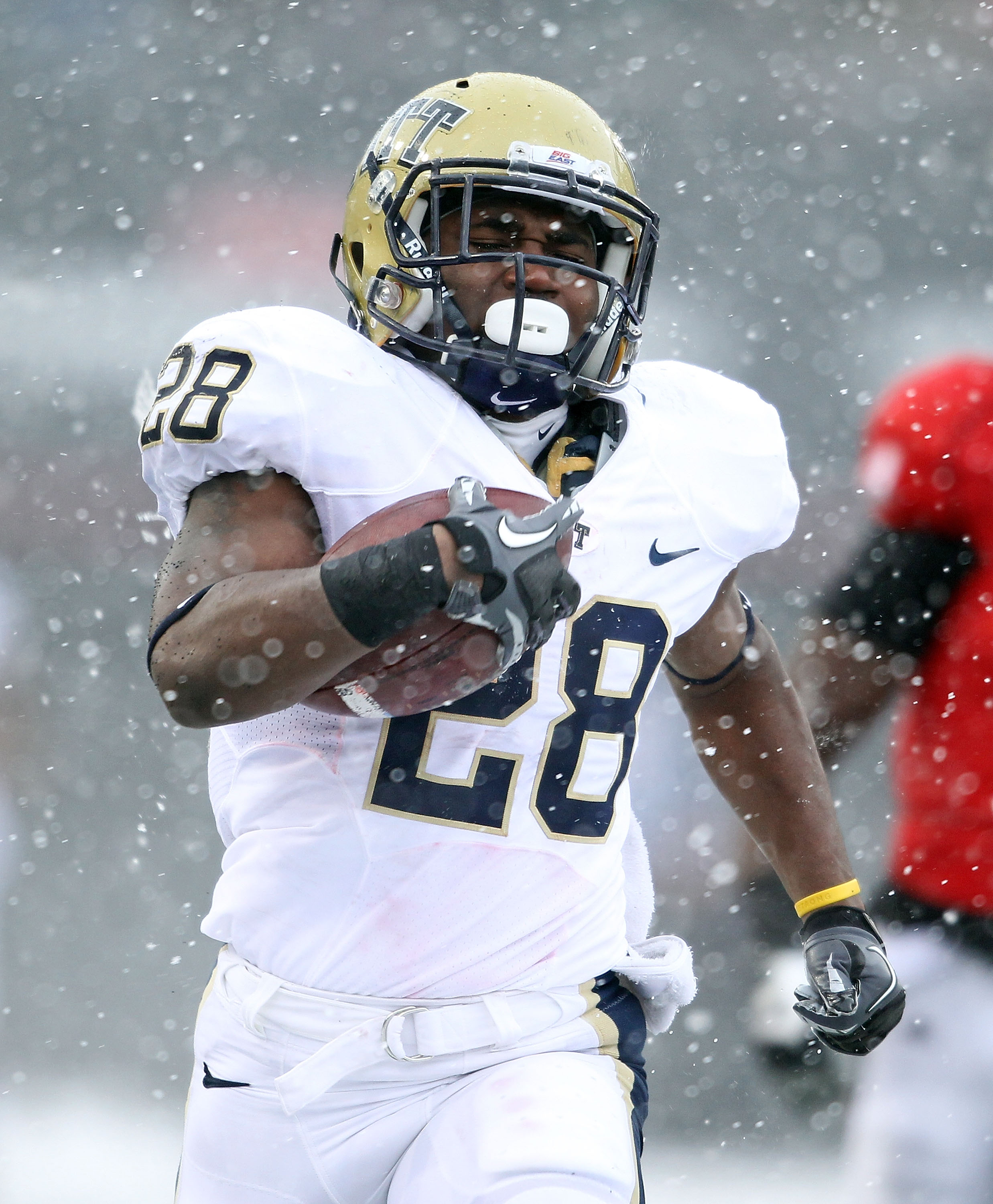 Pittsburgh's Dion Lewis had a terrific freshman year.  He broke Pittsburgh's record for most rushing yards for a rookie with almost 1,800 yards.  He was voted to the All-American second team and entered his sophomore year with high expectations, even receiving some Heisman watch early on.

In his sophomore year, Lewis had a down season, well, if you're comparing it to his rookie season that is.  Despite the "down season," Lewis still was able to rush for over 1,000 yards on the ground.  It's also worth noting that Lewis was injured for some parts of the season, leading him to have over 100 less carries than the season before.

Lewis made the unusual decision to declare for the draft after only his sophomore season.  Despite being younger than other draftees, Lewis has tons of potential.

Lewis has a similar style of Darren McFadden.  While not as fast, Lewis still has good speed and is incredibly quick.  He also has the explosiveness that McFadden has and can be a work horse in the NFL, seeing as he carried the ball over 300 times in his sophomore year.  McFadden has a past of being injured and it's always good to have insurance.  What happens if the Raiders lose Bush in free agency and McFadden gets injured next season?  Do the coaches think that they'll be able to move on with Rock Cartwright, Marcel Reece, Louis Rankin, and Michael Bennett?  Not a chance. 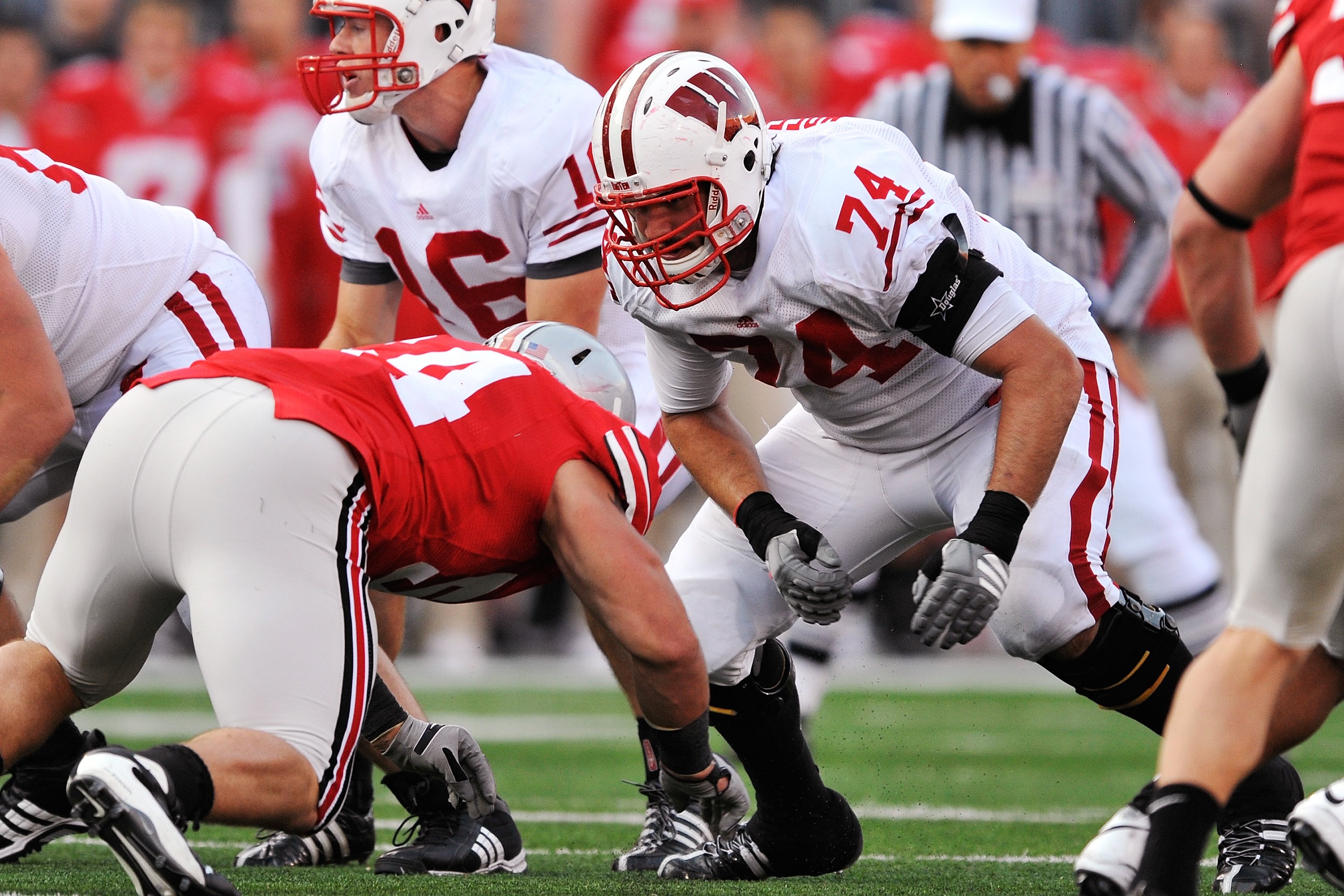 With the recent release of head coach Tom Cable, many believe that right guard Cooper Carlisle is also on his way out.

All I have to say is finally!  Carlisle was once a decent veteran, but in recent years, the Raider Nation has witnessed defensive tackles constantly beat Carlisle for either a sack or a run for a loss.  When Carlisle is able to stay in front of the defender, we see him get pushed back so far that he's literally in the throat of Jason Campbell.

In last season's draft, the Raiders drafted tackle Bruce Campbell, moved him to right guard, and told him to ride the bench while watching Carlisle play terrible football.  While many think that Campbell should replace Carlisle, I think it's Langston Walker at right tackle he should replace.  Walker has been good to the Raiders, but he's aging.  Campbell played left tackle in college, but many scouts believed he was better suited for right tackle during the draft.

Back to the player at hand; Moffitt helped lead the Badgers to one of the top running games in all of college football.  Not only did they pass 3,000 rushing yards, they rushed for almost 50 rushing touchdowns, second in the nation.

Not only can Moffitt play at guard, he could play at center.  While the Raiders have Samson Satele, it was quite clear that he was not what they had hoped for when they replaced him with a rookie offensive tackle who had never played center at the start of the season. 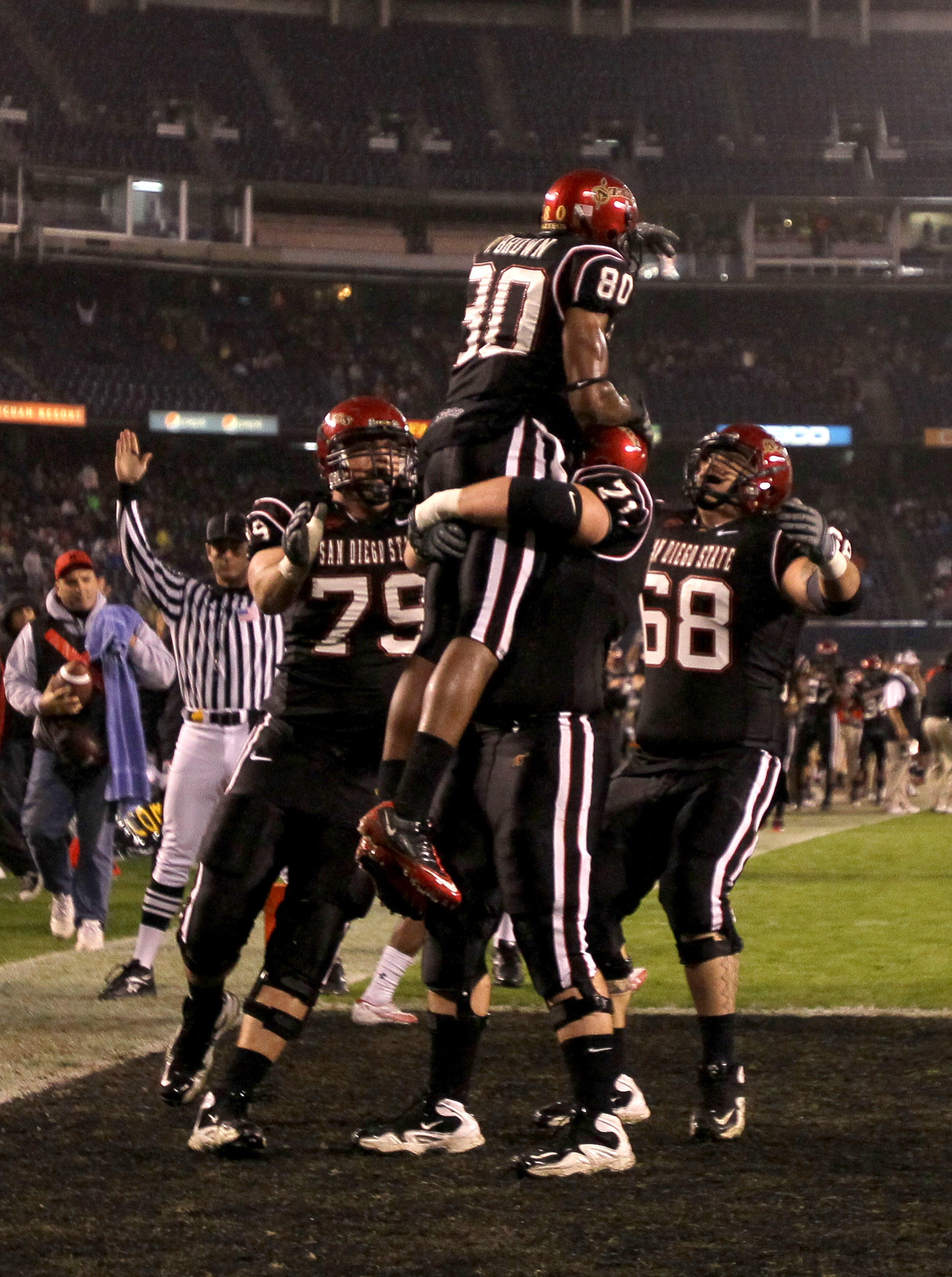 It's no question that the Raiders' receiver core is a weak spot.  So-called analysts say that they drop too many passes, have trouble getting separation, and aren't good receivers overall.  You know, the usual hatred when dealing with the Raiders.

Vincent Brown is a player that I believe is much like Chaz Schilens.  Both are fast, but also have soft hands and do a good job catching the ball.  The knack on Chaz is, he's always injured.  In the last two seasons, he's only played 13 games.  He played well in 2009, but saw his productivity in the games he played in decrease slowly to just eight yards per game.

While the Raiders still have Murphy, Heyward-Bey, and Ford, we need a receiver that is a possession type receiver rather than just speed.  On numerous scouting websites, Brown runs a 4.5, but don't let that fool you.  Larry Fitzgerald, Anquan Boldin, and Marques Colston are just a few of the NFL's best receivers who ran slower than a 4.5.

Brown can fit in the Raiders' system too.  We all know that Al Davis loves the deep passing game.  While he only runs around a 4.5, Brown has great in-game speed and can get past defenders.  Go watch the SDSU-TCU highlights from 11/13/2010 and you'll see how frequently he was able to get past one of the best defenses in the nation. 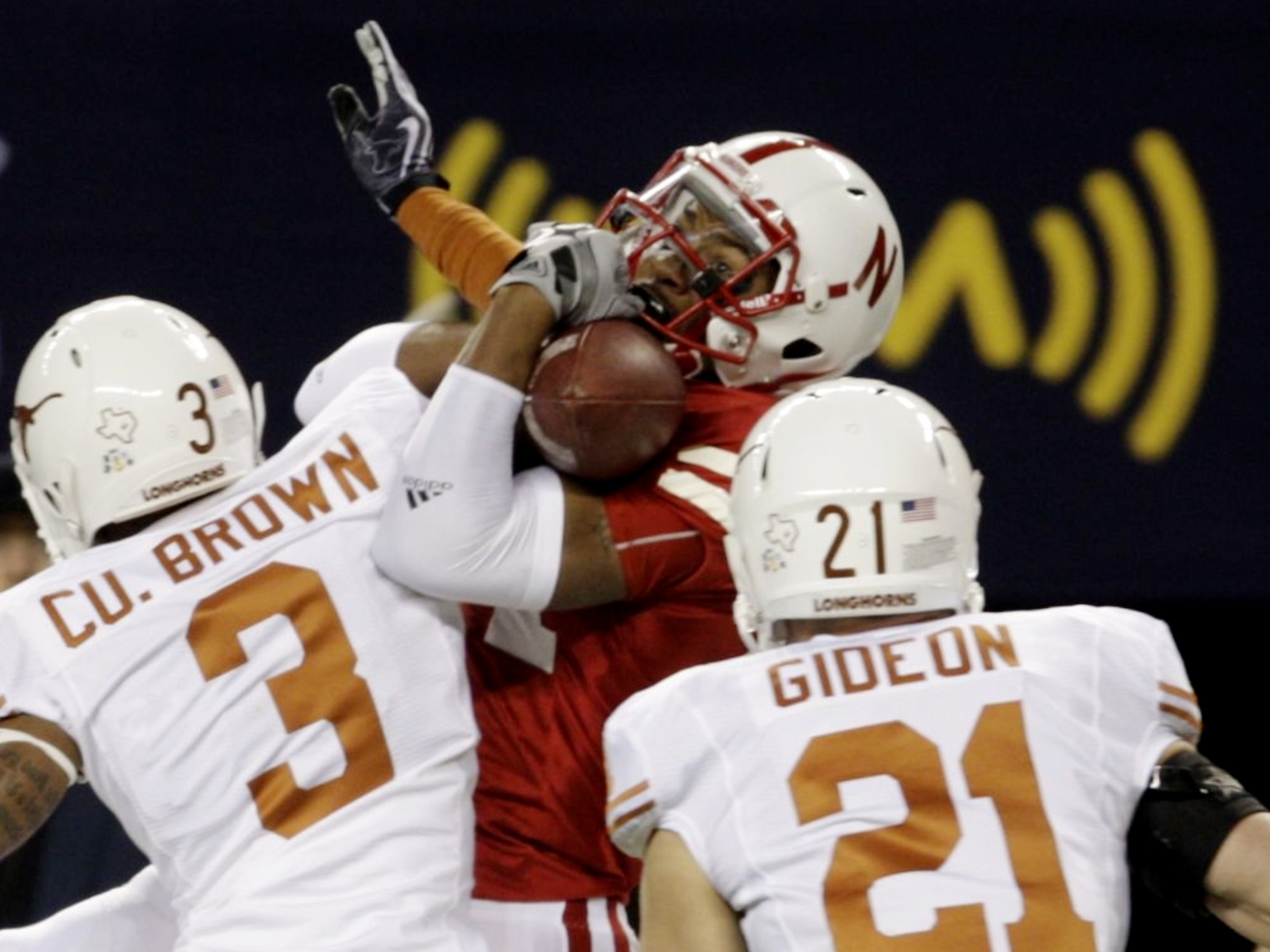 This upcoming free agency has potential to completely destroy the Raiders secondary.  Players like Nnamdi Asomugha, Michael Huff, and Stanford Routt are all set to hit the market.  Routt and Huff don't look like they will get much attention, and I believe they will return without a doubt.

Nnamdi Asomugha leaving is definitely a possibility.  As the best cornerback in the league, everyone is giving him attention.  Even if Nnamdi stays, the Raiders need some depth at cornerback.  Routt and Johnson are decent players, but past those two, we have some players that aren't very good.

Jeremy Ware has shown some flashes of being able to play in the NFL, but he's too low on the depth chart to get playing time.  The cornerback that's in-between Ware and Routt/Johnson is McFadden.  While he hasn't gotten too much playing time, all of Raider Nation saw him constantly get beat in the game against Miami.

Brown is a good player who has done a good job helping Texas to one of the best passing defenses in the nation.  Brown also has good speed, reportedly running around a 4.3 40 yard dash, and we all know Al loves that speed.  However, Brown not only has speed, but he has a great skill set.  Although he only has 1 interception, he was a huge part of the Texas defense, which was sixth in the nation for pass defense, giving up less than 2,000 passing yards. 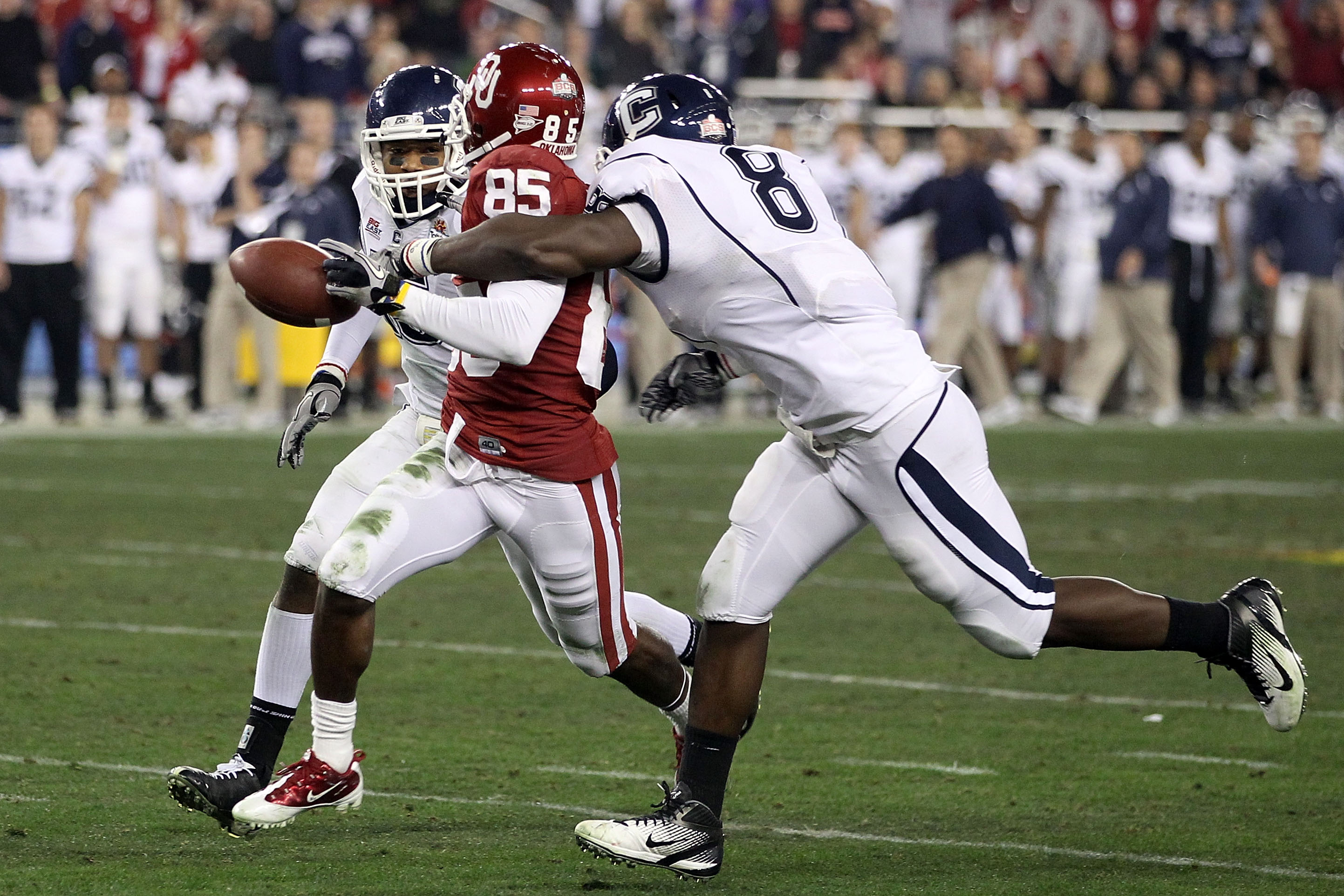 I gotta be honest again, this is another pick that has biased reasoning.  I'm not a fan of Quentin Groves.  I think that he's a decent player, but there's something about him that I'm just not a fan of.

Someone I do like is Lawrence Wilson.  This guy has it all.  He's fast, a good tackler, and is a natural ball-hawk.

Running around a 4.6, Wilson was able to tackle the ball-carrier over 120 times in in the 2010 season alone.  In his four years at Connecticut, he racked up nearly 440 tackles, averaging 110 per year.  That's just at outside linebacker!

In his last two seasons, he also was able to bring the quarterback down for a total of nine times, five in the 2010 season.  He also showed his ball-skills as he intercepted a total of five passes in his college days, three coming from his sophomore year.  He was able to take three of those five interceptions all the way home for an touchdown.

Yes, it's better to have a veteran Groves over a rookie like Lawrence, but let's just throw out a few stats.  Grove's career tackles are 27 less than what Wilson averaged per year.  Lawrence has 7.5 more sacks than Grove, while picking off three more passes. 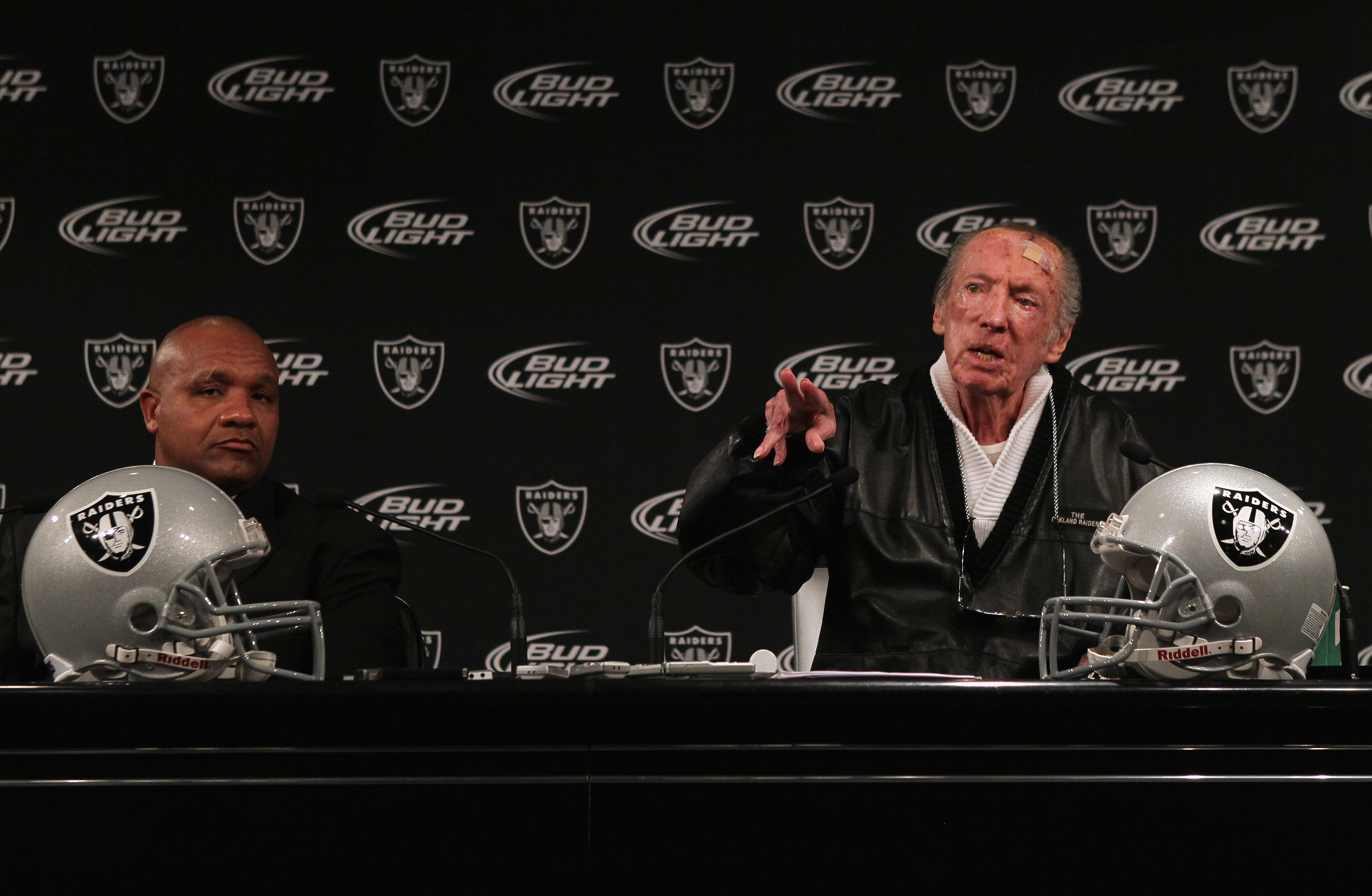 That's all for now.  I had a few more players in mind, but I accidentally erased everything I had written down for a few players, the second time in this article, and I'm not too thrilled about it.

With the draft combine right around the corner, it's time to start thinking about who the Raiders want to steal in this years draft as we have done the past few.

Please let me know what you think about the players I mentioned, talk about the ones that I may have missed, etc.