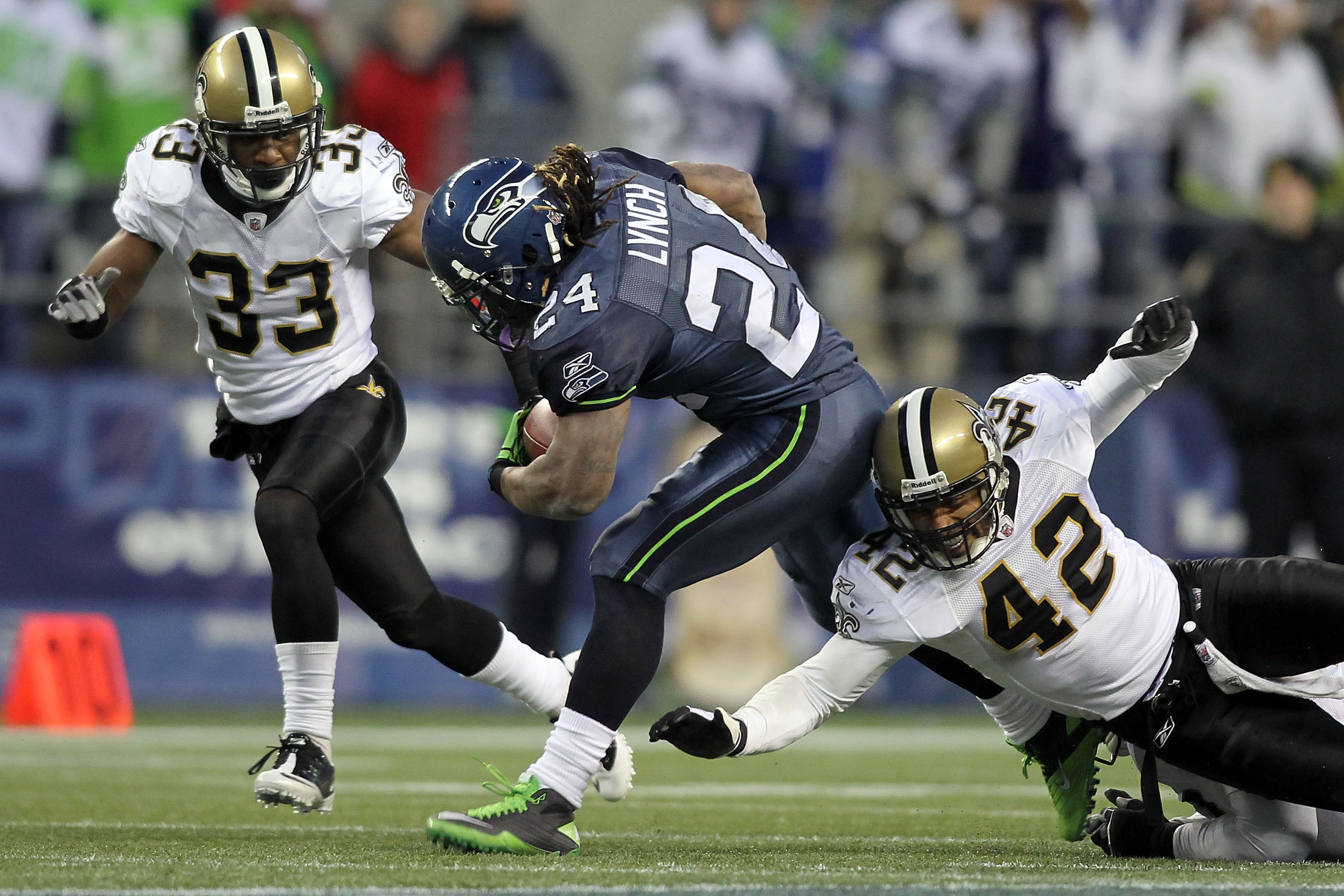 The NFL Playoffs are in full swing. There is one weekend down and three of four to go (depending on how you view Pro Bowl weekend).

If you missed any of this weekend's action, you want to glimpse next weekends schedule or you just want to end the suspense now and find out who is going to win the Super Bowl: this is the slideshow for you.

I am going to illuminate the 2011 playoffs past, present and future. 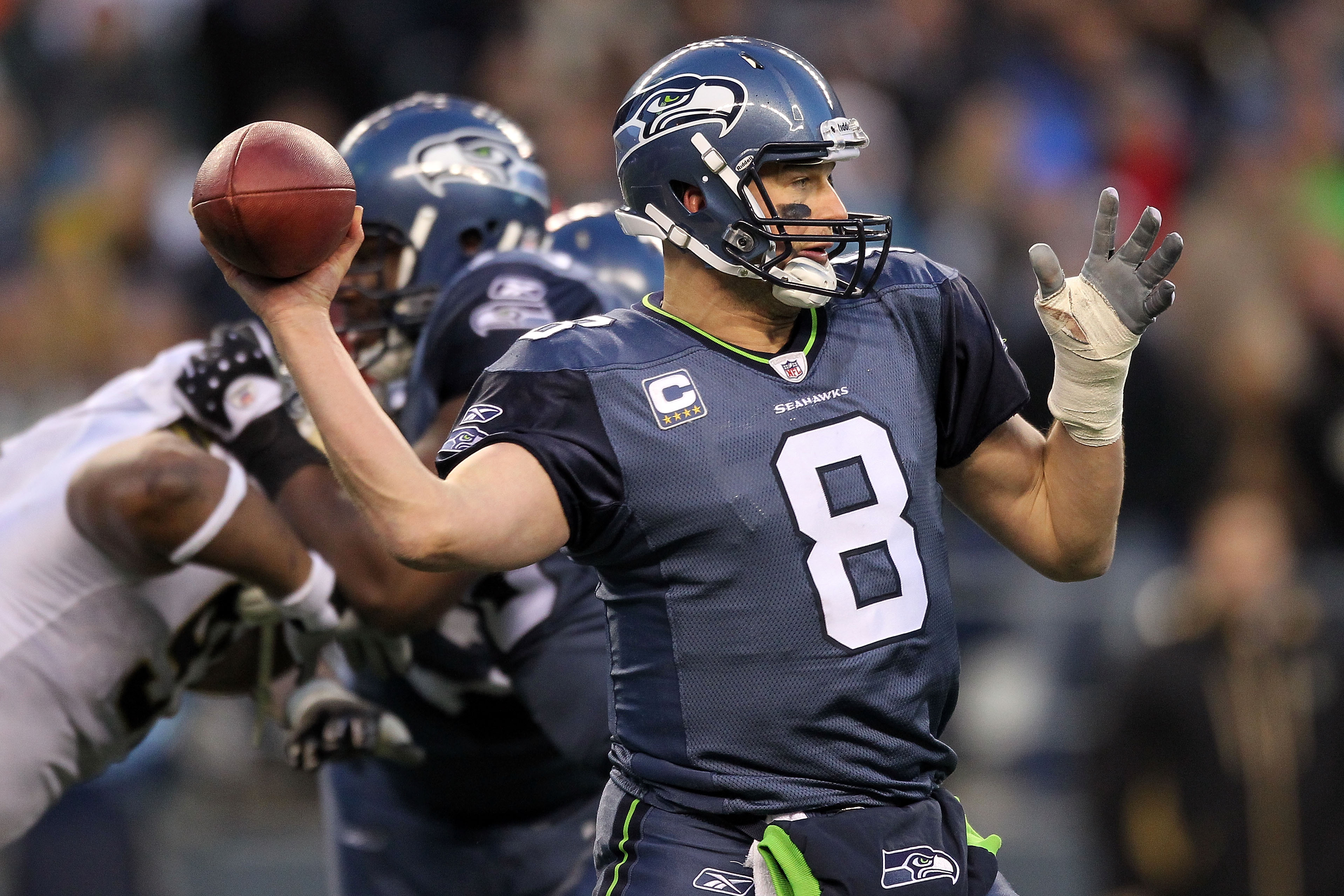 The Seahawks need to win the Super Bowl to get their record over .500. They are the first ever sub .500 team to make the playoffs and they just upset the defending Super Bowl Champions.

Matt Hasselbeck shredded the Saints defense for four touchdowns and just one interception. The interception came on a dropped pass by his receiver on the Seahawks first play of the game. The Saints turned the turnover into points and they were up 10-0 early in the first quarter.

The Seahawks took control from there. They punctuated the victory with a Marshawn Lynch run that is one of the greatest run in postseason history. Lynch broke eight tackles on his way to the endzone.

Ryan Gets His Man 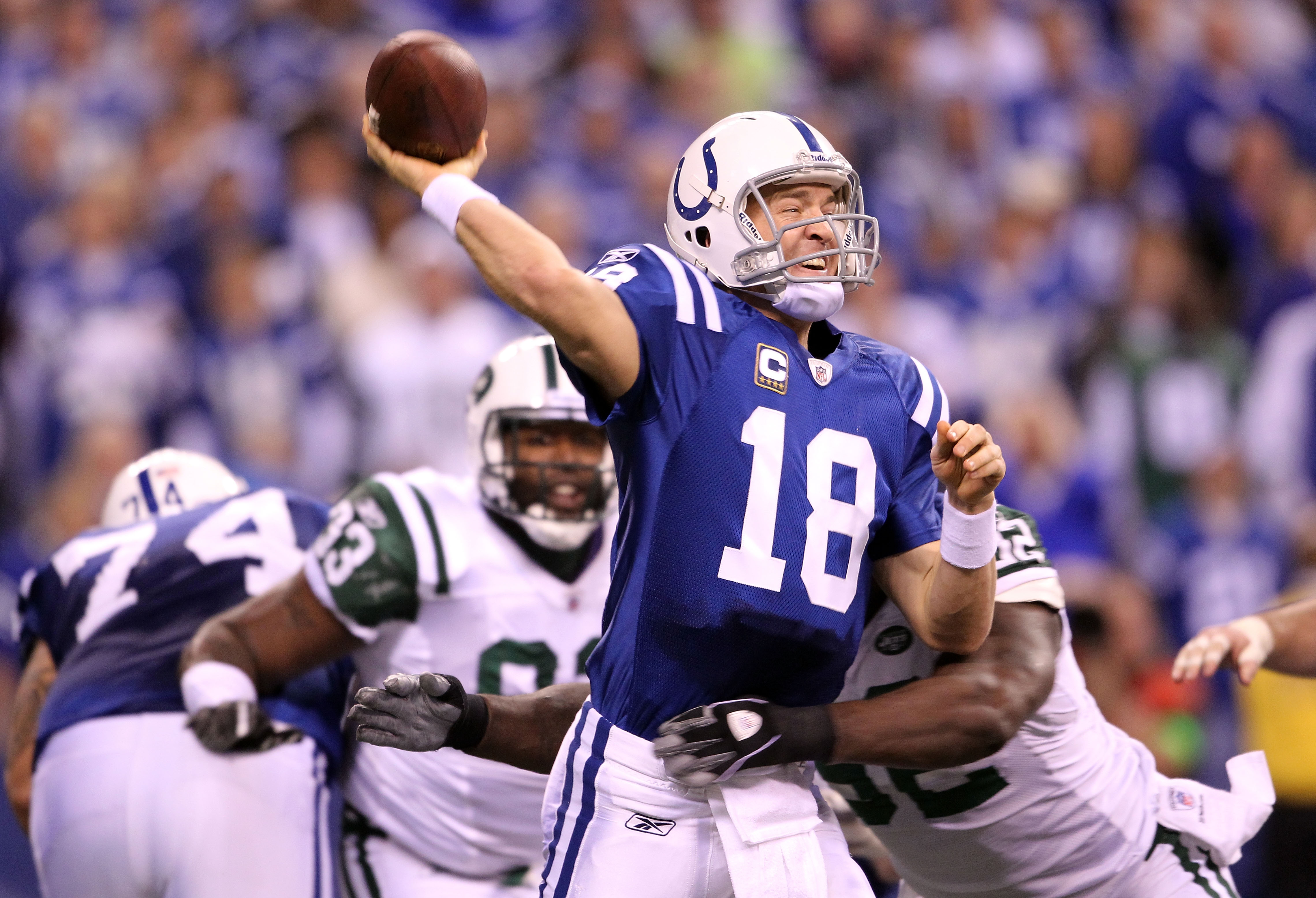 Rex Ryan made much of the fact that he had yet to beat all-world QB, Peyton Manning.

As Adam Vinatieri split the uprights on a 50-yard field goal with a less than a minute left to give the Colts a 16-14 lead, it looked like Ryan was going to end up on the losing end to Manning once again.

The Jets would not be denied, however. Antonio Cromartie set the Jets up with great field position and the Jets were able to get kicker, Nick Folk a relatively easy 32-yard field goal attempt for the victory. Folk drilled the kick as time expired and the Jets escaped with a victory.

Cassel is Made of Sand 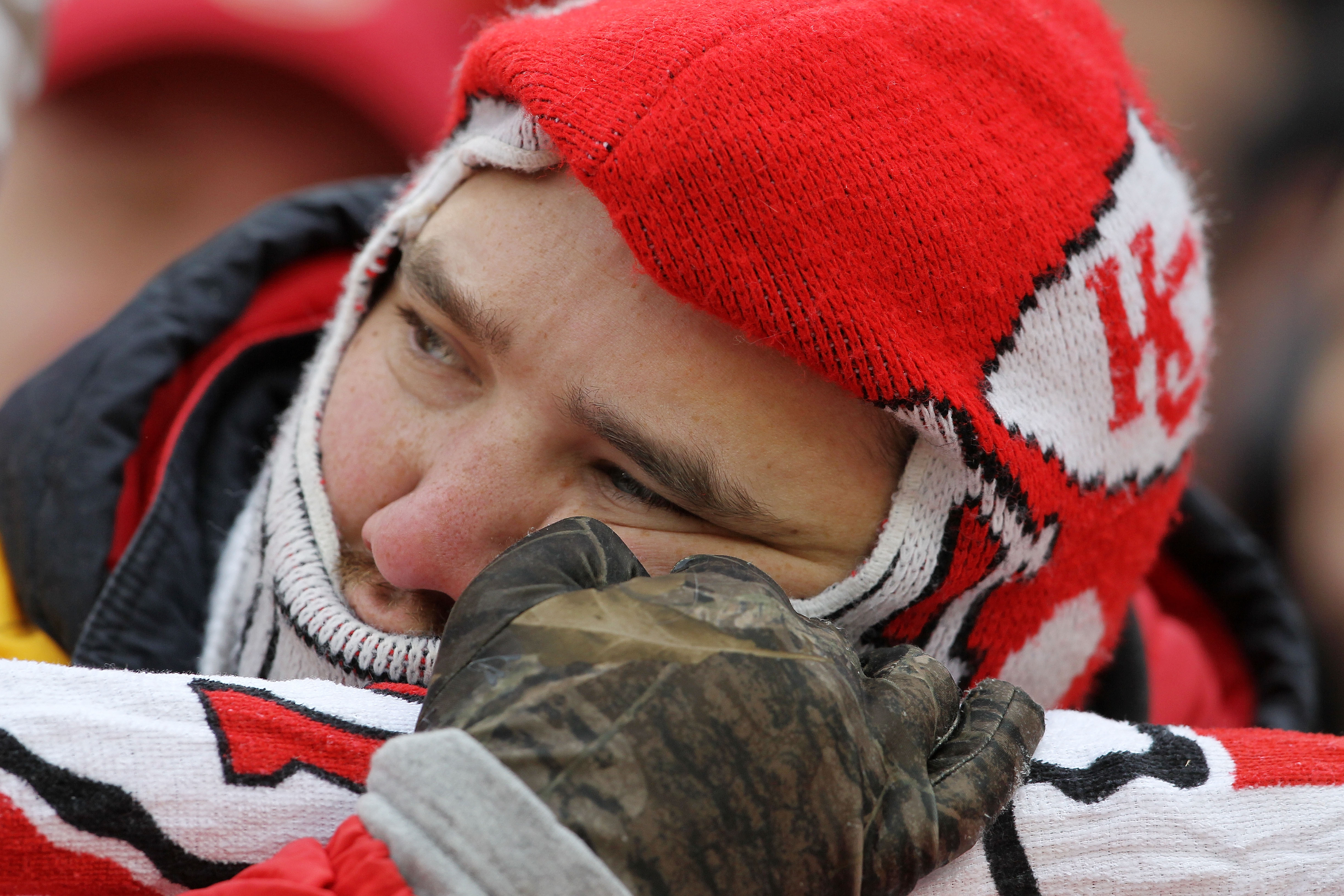 The Chiefs took a 7-3 lead going into the second quarter on the strength of a 41-yard touchdown run by Jamaal Charles. That was as good as it got for the Kansas City Chiefs.

The Ravens defense took the game over. The Chiefs ended with just 161 yards. Matt Cassel completed just nine passes for 70 yards and they had the ball for less then 19 minutes.

The Ravens used a well-balanced attack to subdue the Chiefs. They ended with 40 carries for 142 yards as they easily dispatched the Chiefs.

Green Akers Is Not the Place to Be 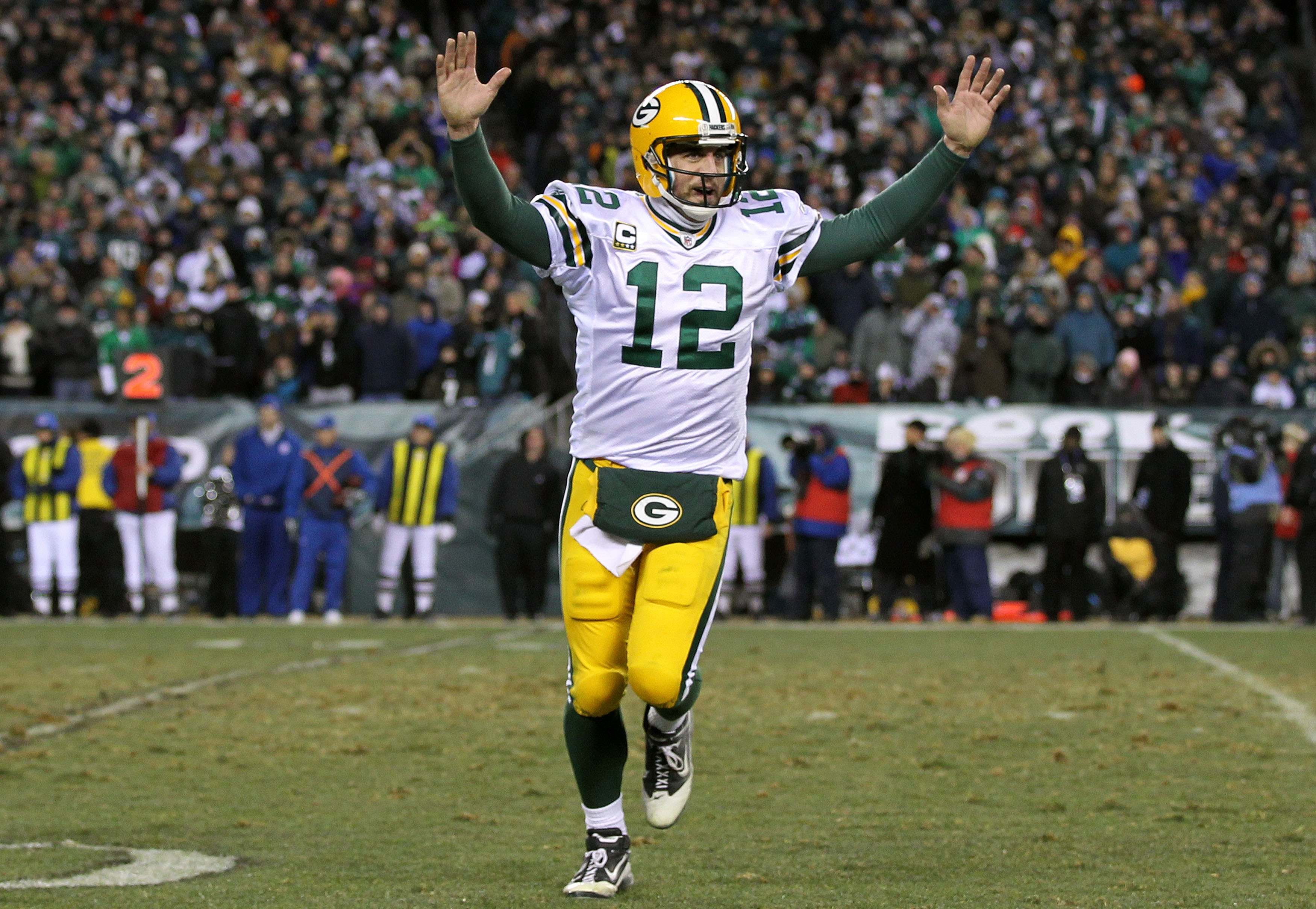 The Packers jumped out to a 14-0 lead and never looked back. Aaron Rodgers threw for three touchdowns, but only had 180 yards. The 180 was enough though as the Packers were able to jump-start a struggling run game.

The Eagles tried to mount a late comeback, but fell just short when Michael Vick had his pass to the endzone intercepted.

Eagles fans will not be pointing their fingers at that interception. On a day that saw the Eagles fall by five, they missed two field goals by David Akers. 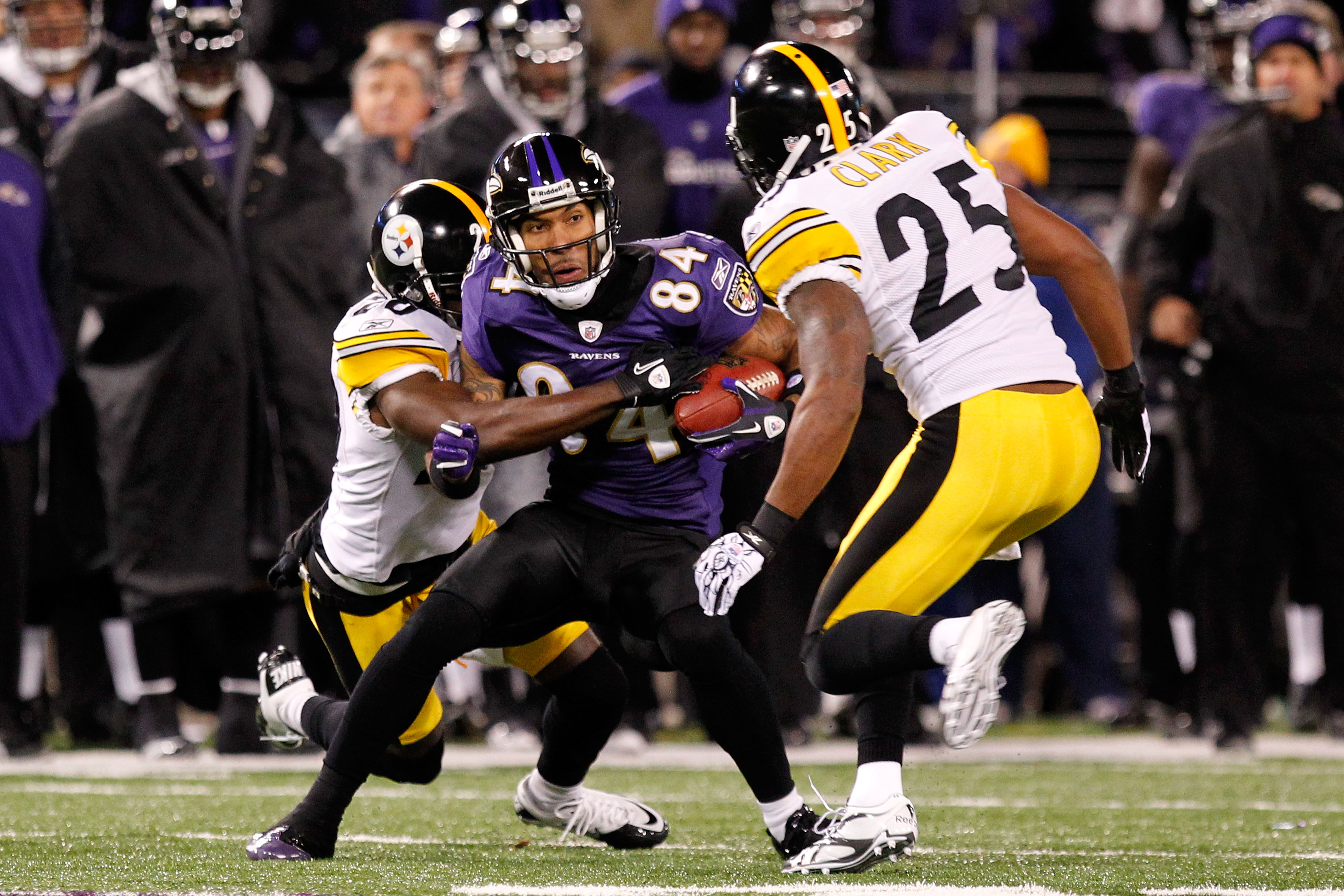 As the close games indicate, these teams are evenly matched. This is going to be a great, hard hitting and well played contest. This one is coming down to the final moments and there is no one better in the game's closing minutes than Steelers QB, Ben Roethlisberger. 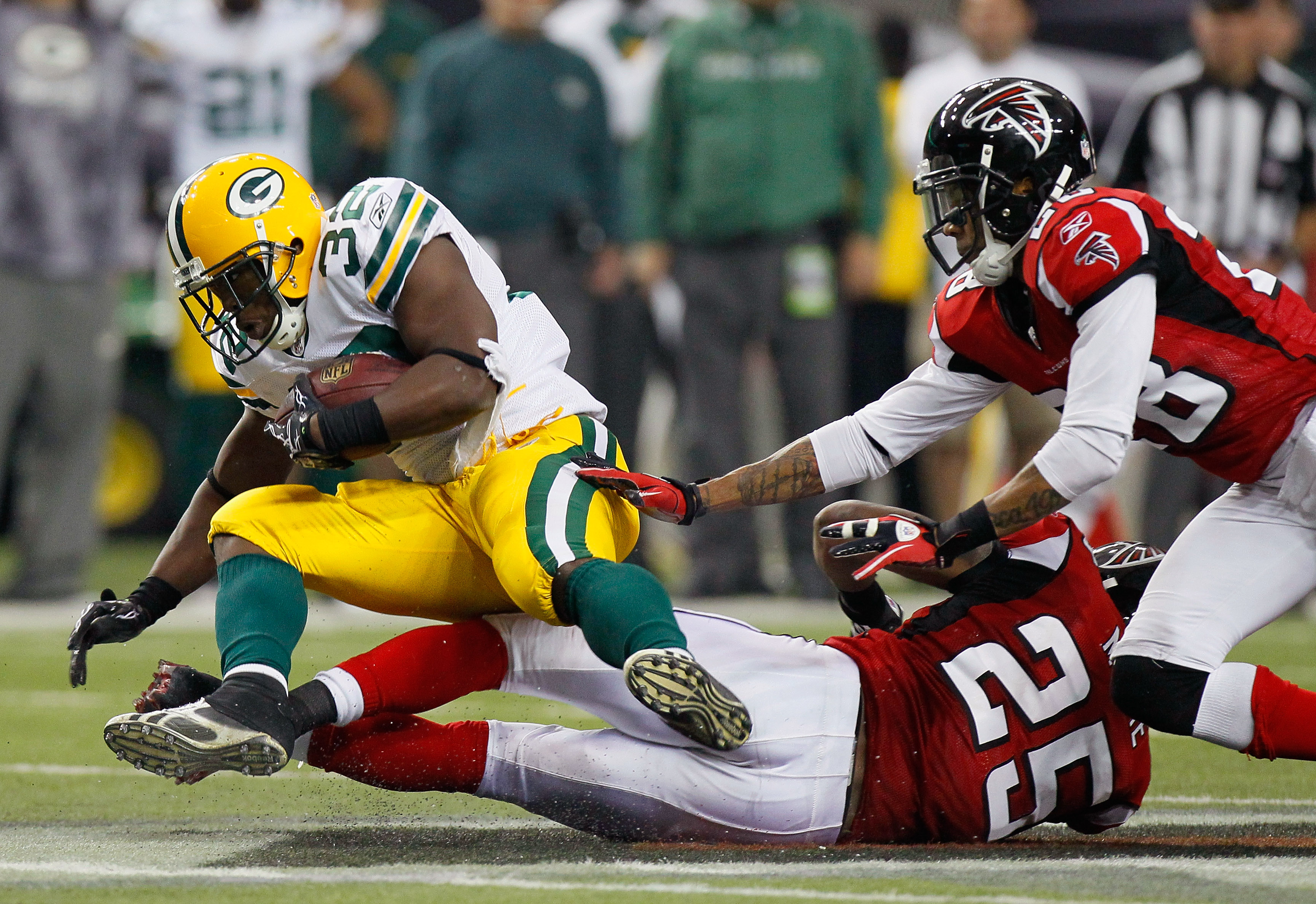 The Packers are on their way to Atlanta to take on the NFC's number one seeded Falcons. The Falcons claimed the first seed by being dominant at home. They finished the year 7-1 in their comfy dome.

This game will be a rematch of a Week 12 contest that Atlanta won 20-17. The Packers are healthier now then they were then and they hope it can make up the three point difference.

Look for the Packers to use their new-found running game to give them the push they need to take down the Falcons.

Cinderella Has Been Selected: Seattle @ Chicago 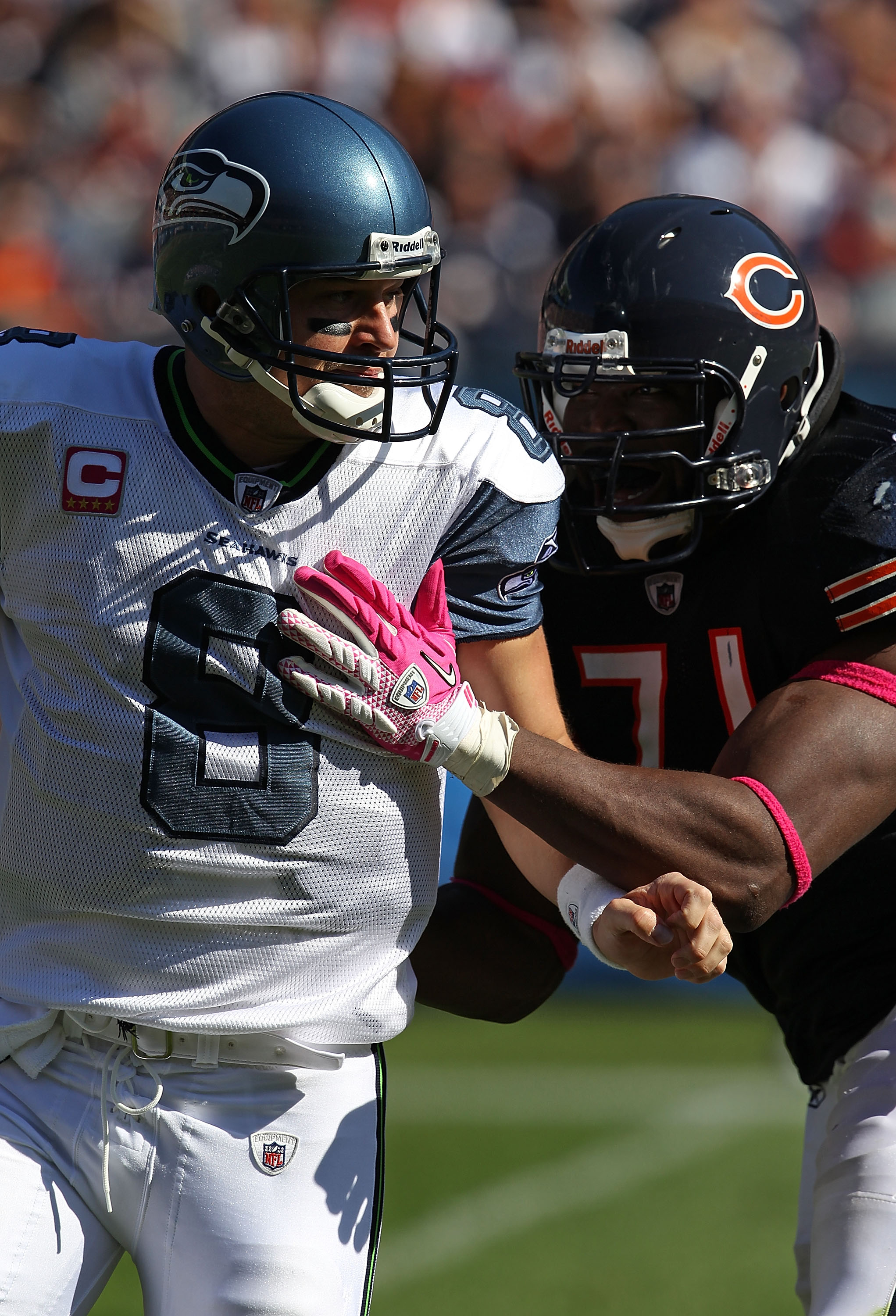 The Seahawks ride their improbably first round victory to the Windy City, to take on the waiting Chicago Bears.

The Seahawks were a far different team when rookie LT, Russell Okung was healthy enough to play. This was never more apparent than in the Hawks-Bears Week six matchup that found the Seahawks leaving Chicago with a 23-20 victory.

Okung was able to handle Julius Peppers most of the day without help. The Bears defense thrives on getting pressure on the QB and Matt Hasselbeck proved he can still pick apart a defense when he has time to throw. With Okung slowing down the Bears pass rush, the pumpkin will remain a carriage. 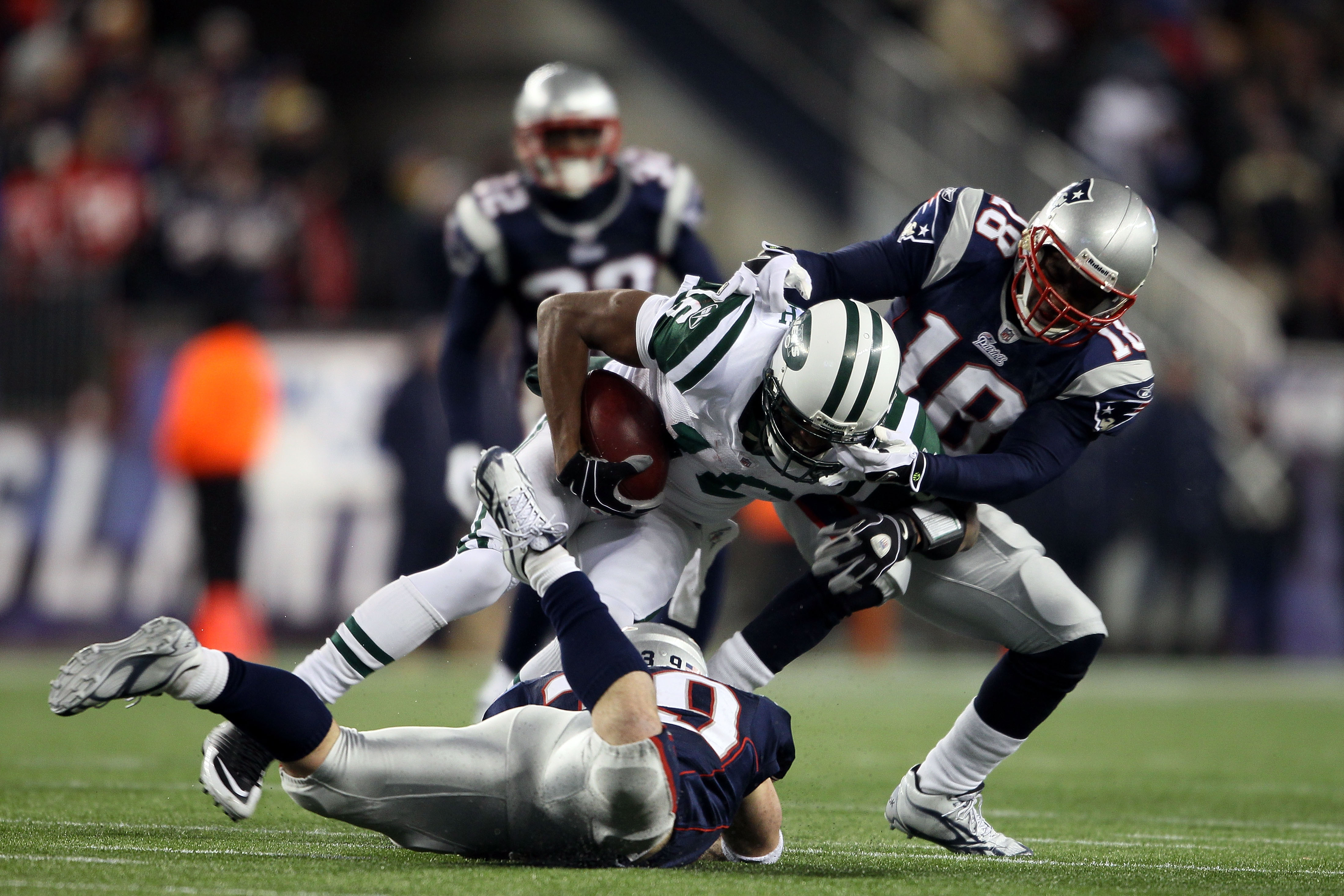 Both of the AFC Divisional round matchups feature teams playing each other for the third time. The New York Jets travel to take on the New England Patriots in the final game of the Divisional Round.

Rex Ryan can get in all the shots he wants at Tom Brady, but he can't come up with a game plan or fire up his team enough to make up that kind of difference. 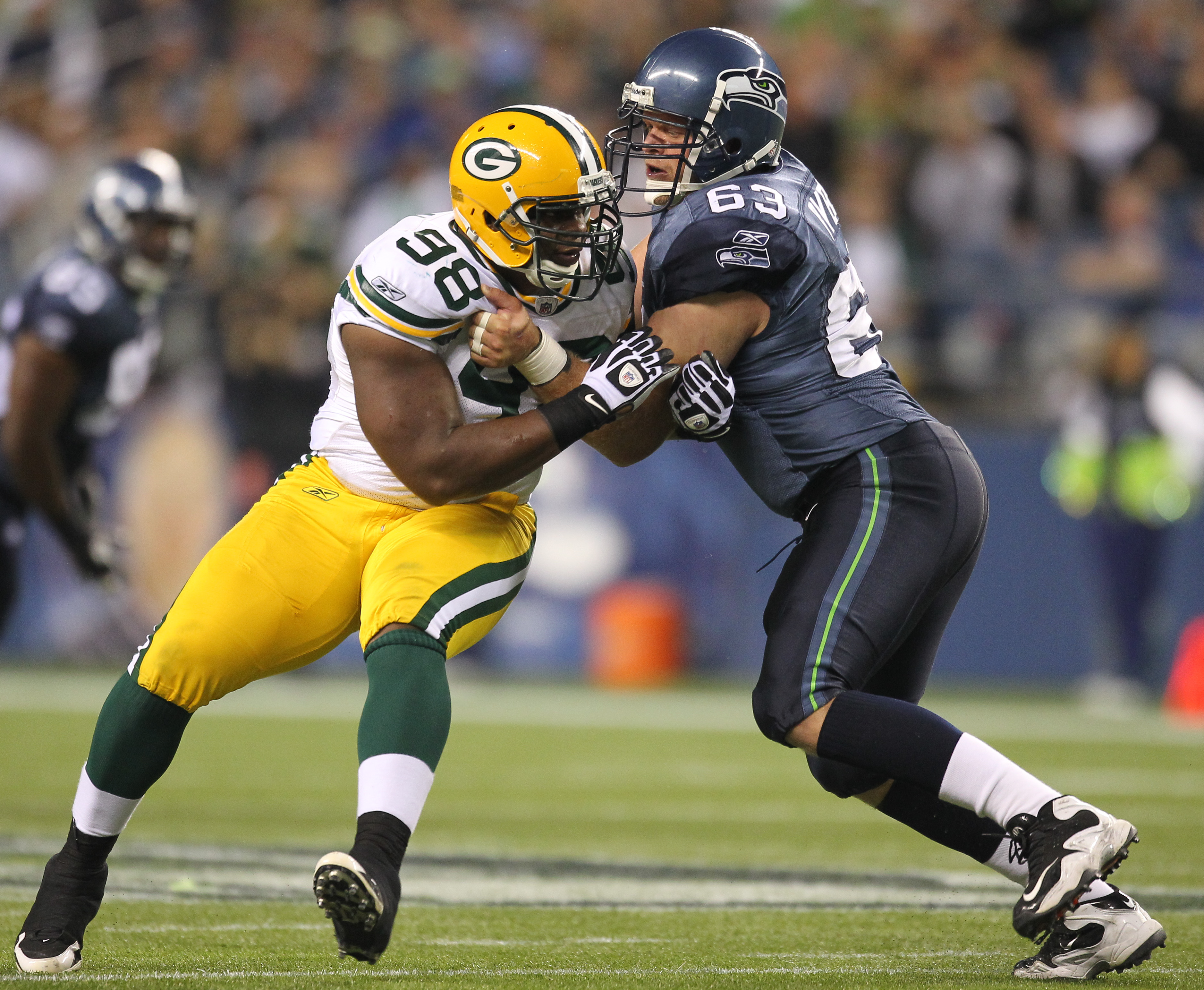 In an improbable twist of scheduling the Seahawks, who finished the season 7-9, are going to host the NFC Championship game. That's the good news for the Seahawks.

The bad news: The Packers can play pass defense. Aaron Rodgers is going to torch the Seahawk pass D much the same way Drew Brees just did. The Seahawks will not be able to put up 41 points in this contest. The Packers will carry their number six seed to the Super Bowl 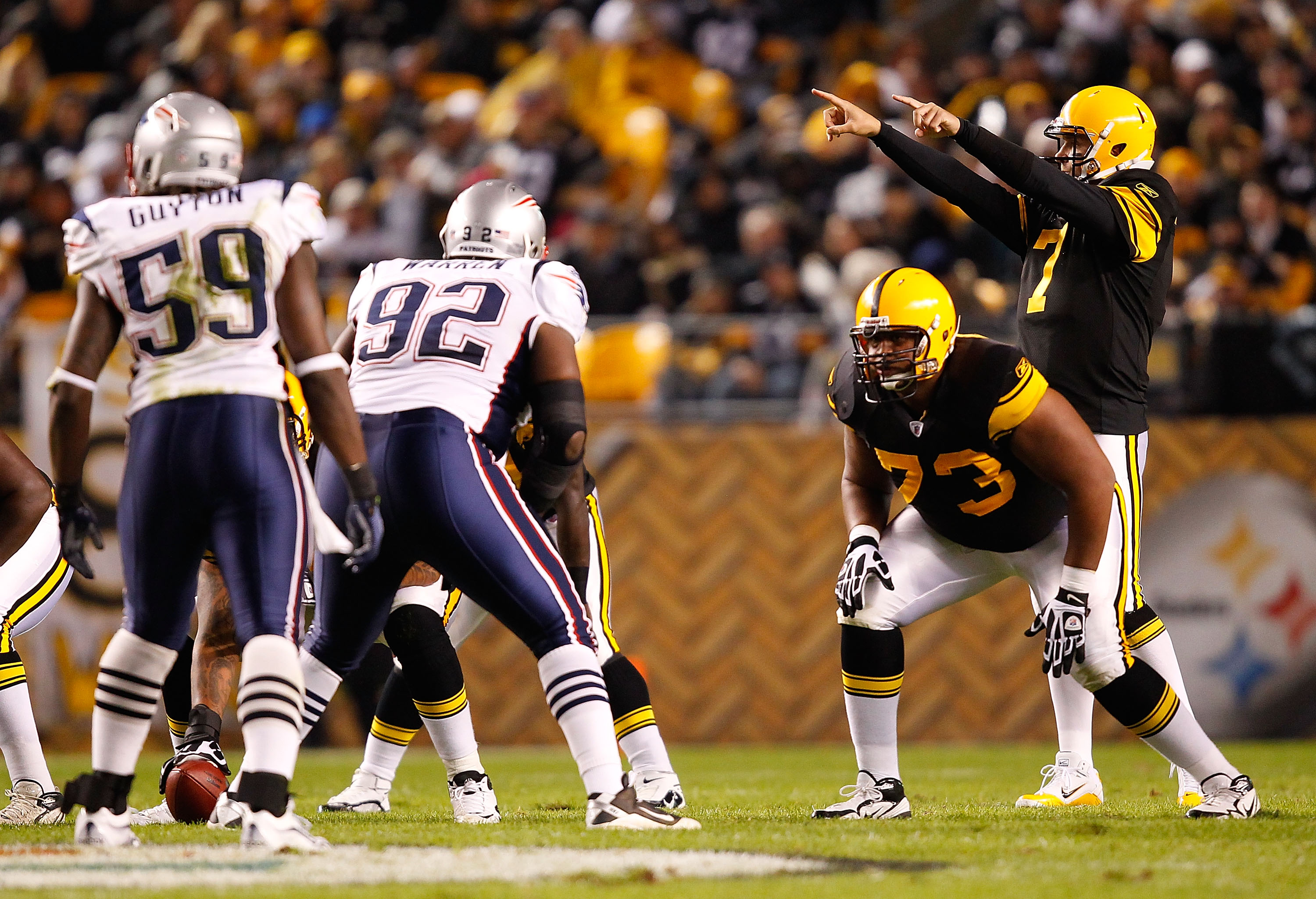 Once again the AFC will be represented by either the Steelers or the Patriots. This game will be a rematch of the Week 10 contest that saw the Patriots go into Pittsburgh defense for a 39-26 victory.

You can expect the Steelers to have a better and more effective game plan for this contest, but it will not be enough. 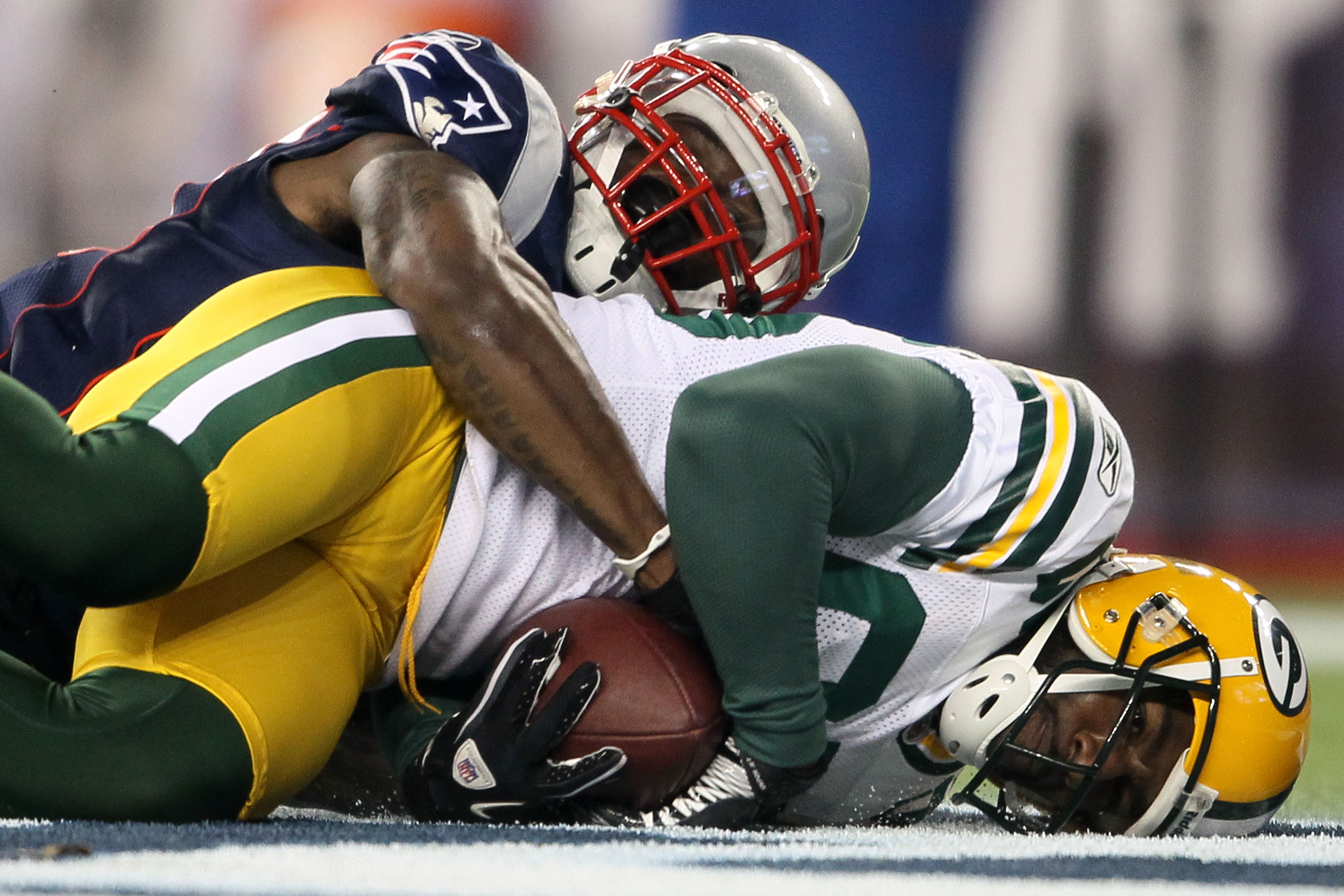 This game will be a rematch of a Week 15 contest that saw the Patriots narrowly escape with a victory on their home field, 31-27. They sealed the victory when they sacked Matt Flynn and forced a fumble on the Packers final drive.

The Packers played that game without the services of the concussed, Aaron Rodgers. The Packers were able to run for over 100 yards on a Patriots' defense that was waiting for them to run the ball. Just the presence of Rodgers alone will force the Patriots to disperse some of their attention from the run.

This Patriots team has the kind of unbeatable feel to them that the NFL hasn't seen since the Patriots last had that unbeatable aura in 2007. Just like that season, the Patriots are going to fall just short of their ultimate goal.