Donovan McNabb Benched: 10 Reasons Why McNabb and the Redskins Are Done 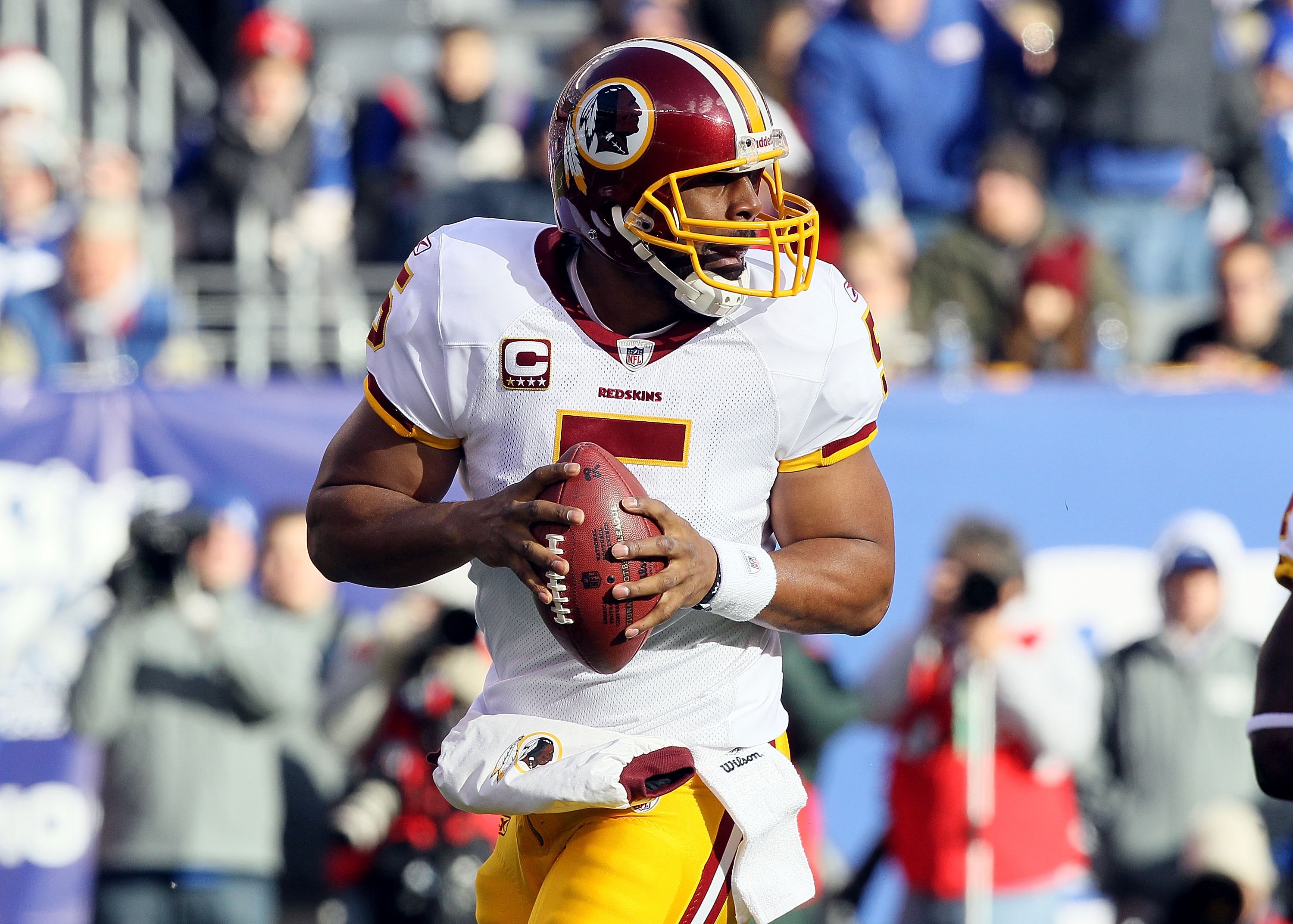 It was released earlier today that Coach Mike Shanahan decided to name Rex Grossman the starter for the Washington Redskins for the remainder of the season. That puts Donovan McNabb as a backup, and to add insult to injury he is now penciled in at third string behind John Beck.

Shanahan has made it clear that McNabb will not start or play in any more games for the rest of the season, in any situation.

This is another move that Shanahan has made that will eventually end to him getting axed, and it may not show now, but it will in time. This is one of many questionable calls this season, and it will only further this already disastrous Redskins team.

McNabb is obviously insulted. This is a guy who has had immense success in the NFL, and has been struggling more than usual this season. However, this is his first season in an entirely new offense on an entirely new team.

Here are 10 reasons why McNabb is done in Washington:

10. The Redskins Can Still Release Him 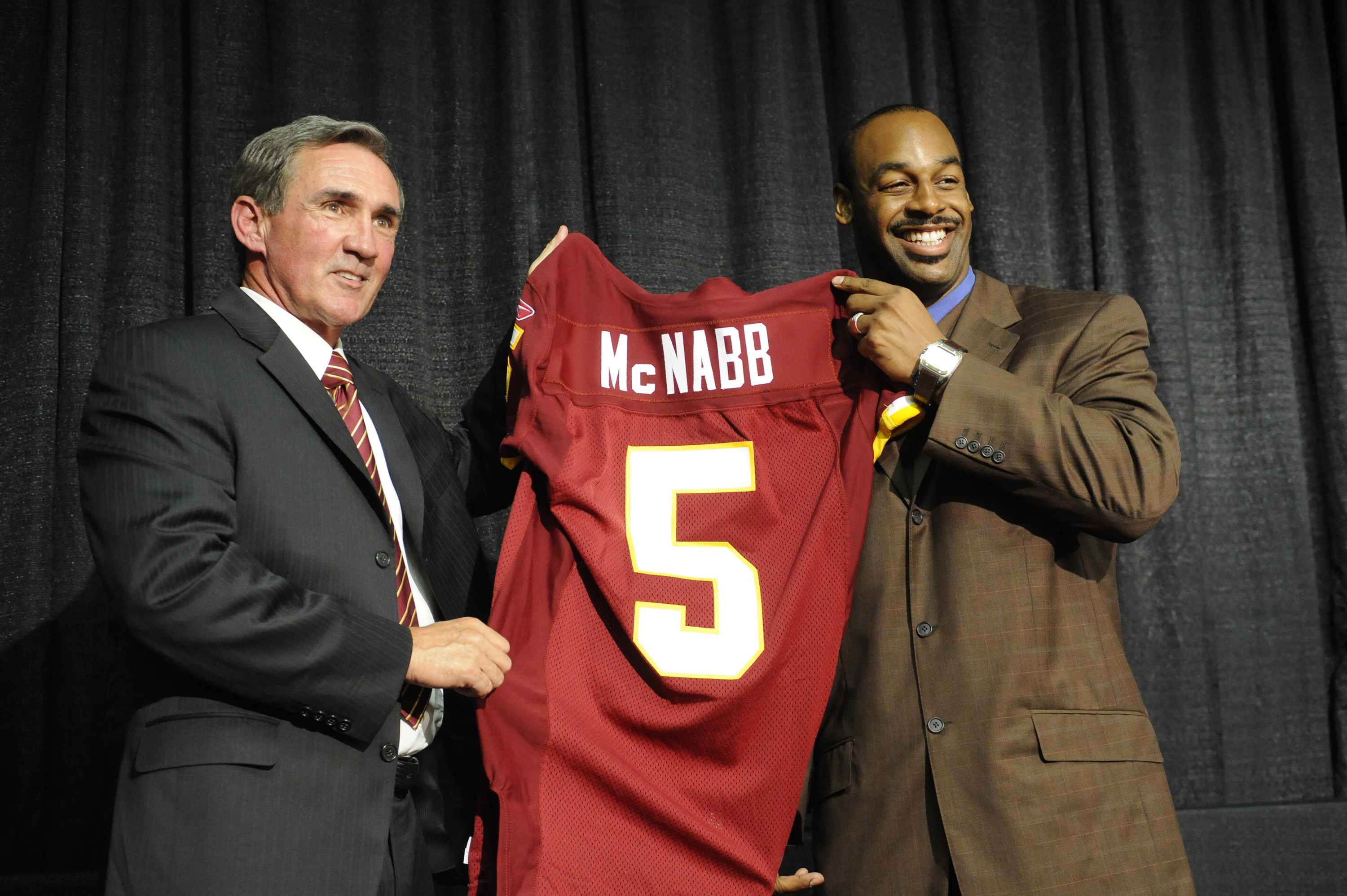 The Redskins signed a five-year $78.5 million dollar deal with McNabb, about halfway through this season. Although the contract has been signed, the Redskins could still just flat out release McNabb and not keep him on the team.

This quote from Mike Shanahan makes this look like a very likely possibility.

"I also told him," Shanahan said, "that I cannot guarantee him that he will be back next year."

That has to make McNabb feel like he is no longer wanted in Washington. The combination of him not only being benched, but Shanahan openly saying that he can't promise that he will be back, has to put McNabb in an unsure situation.

If the Redskins were to release McNabb at the end of this season, instead of having to pay him $78.5 million, they would only owe him $3.75 million.

This type of deal may work out well for both McNabb, and the Redskins. 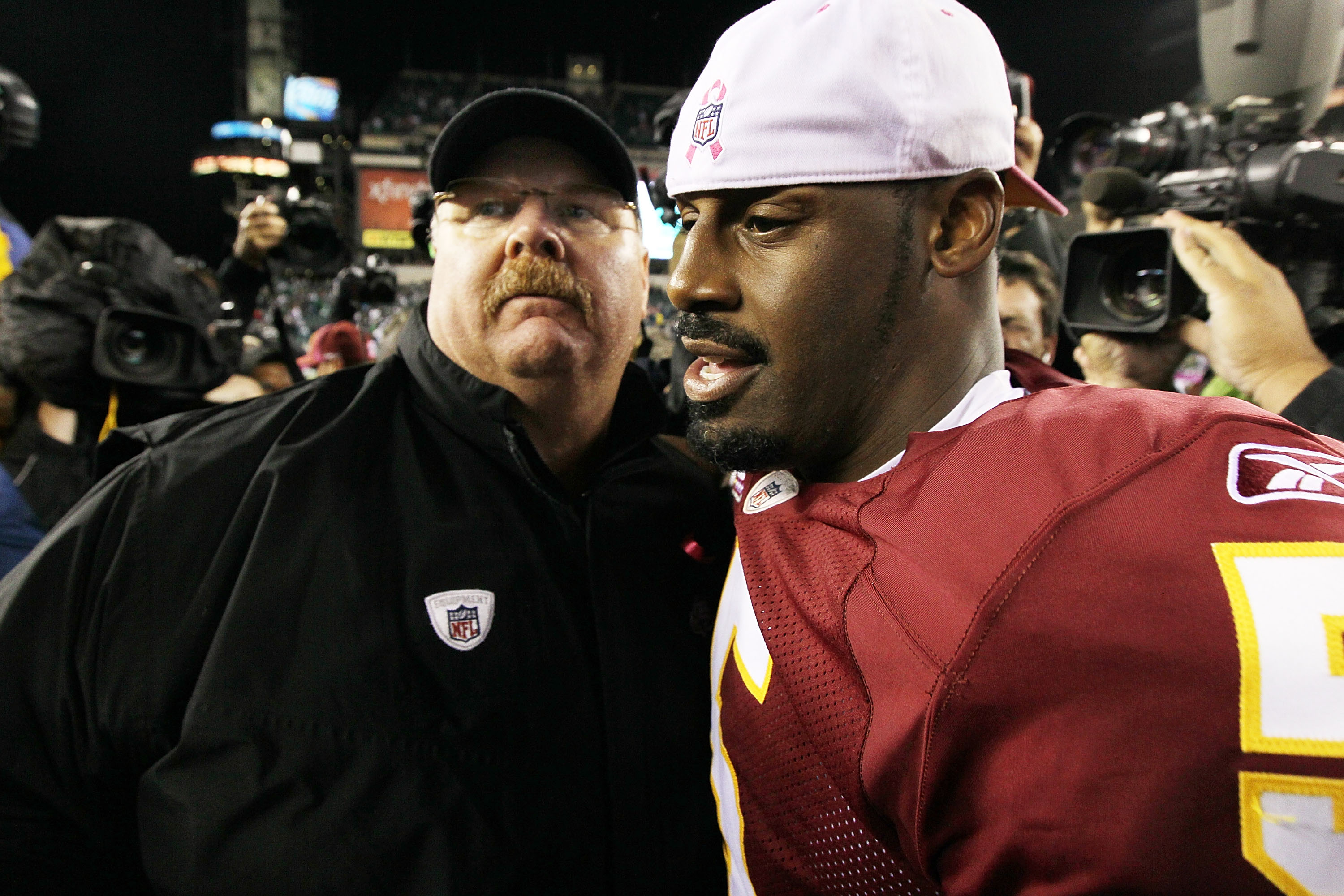 McNabb started his career with the Eagles, and I honestly expected him to finish it with them.

But, he was traded to an NFC East rival. In one of the most heated divisions in all of the NFL.

It can't be easy having to play the Eagles twice every season, with one of those games being in Philadelphia.

I'm sure it was a painful for McNabb to lose that second game in Washington the way they did, and the first win in Philadelphia was probably not much more satisfying.

McNabb won a close one in Philadelphia. McNabb lost big in Washington.

He may have been able to split the games this season, but it doesn't look like the Redskins will be able to win both next season.

The feeling in Philadelphia is still cut in half on their opinion of McNabb, and if he continues to play in Washington the general feeling will switch to the more negative view.

8. McNabb's Not Playing For Money 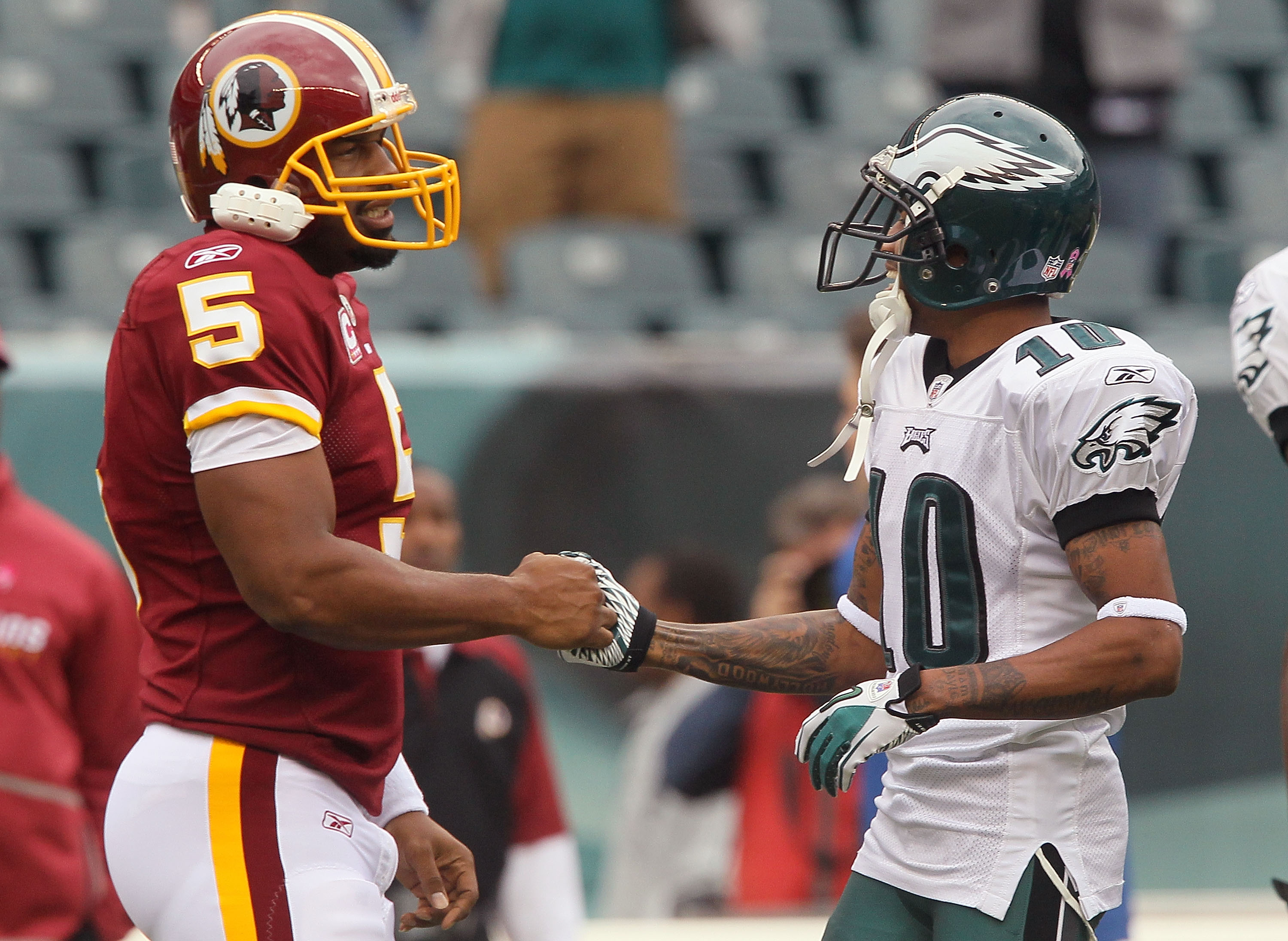 McNabb was offered that five year contract by the Redskins, and he accepted it.

For a QB that has his skill set, doesn't $78.5 million seem a little much?

McNabb is now at the point in his career where he is playing to win games. By winning games he is ultimately trying to reach his ultimate goal, which is to win the Superbowl. You know that at this point in McNabb's career, he has enough money.

McNabb has never been a money hound, he has never asked for ridiculous contracts at any point in his career. That shouldn't change when he is done in Washington.

It's a strong possibility that McNabb will end up going to whatever team he thinks gives him and his fellow teammates the best chance to win. As stated before, there are plenty of teams that have full talented rosters and not a lot of cap room.

I'm sure McNabb will make it work, even if that means taking a cut in his paycheck.

7. McNabb Still Has Not Won a Superbowl 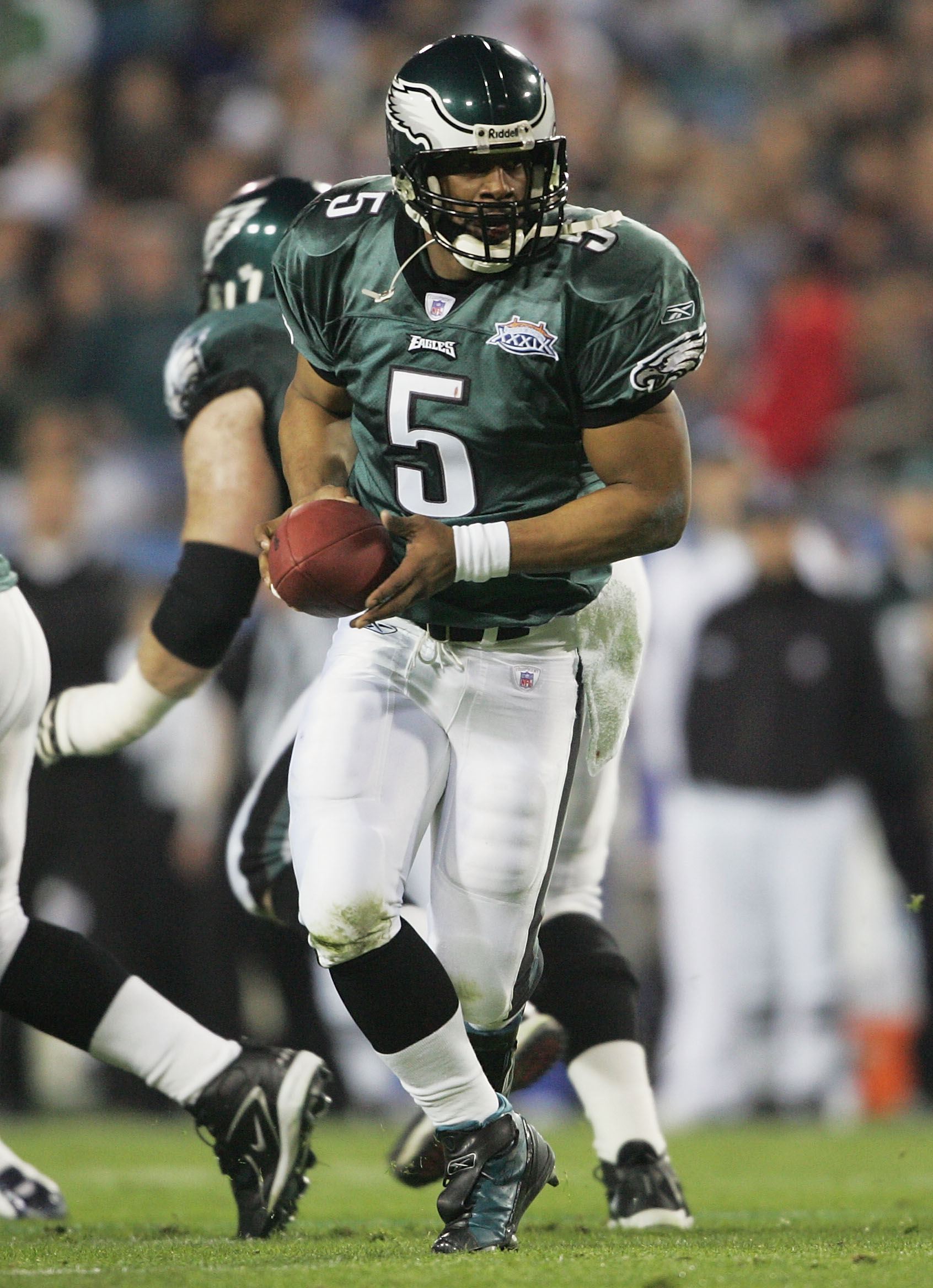 McNabb has been incredibly successful in his career, but he has never been able to win the big game.

The Eagles and McNabb were so close in the 2004, but the Patriots were able to come out on top and win the game by three points. McNabb had one of his best personal performances of his career, and he was able to break and set a few records in the game.

Although, McNabb was not the reason for the loss, he was still not able to win the game and get his Superbowl win. This is something that every QB wants, and this does not change in McNabb's case.

It is not likely that the Redskins will be able to go to the Superbowl anytime soon, especially in the five seasons that McNabb's contract is good for.

McNabb is going to want to be on a team that will be able to get him closer than what he is now. 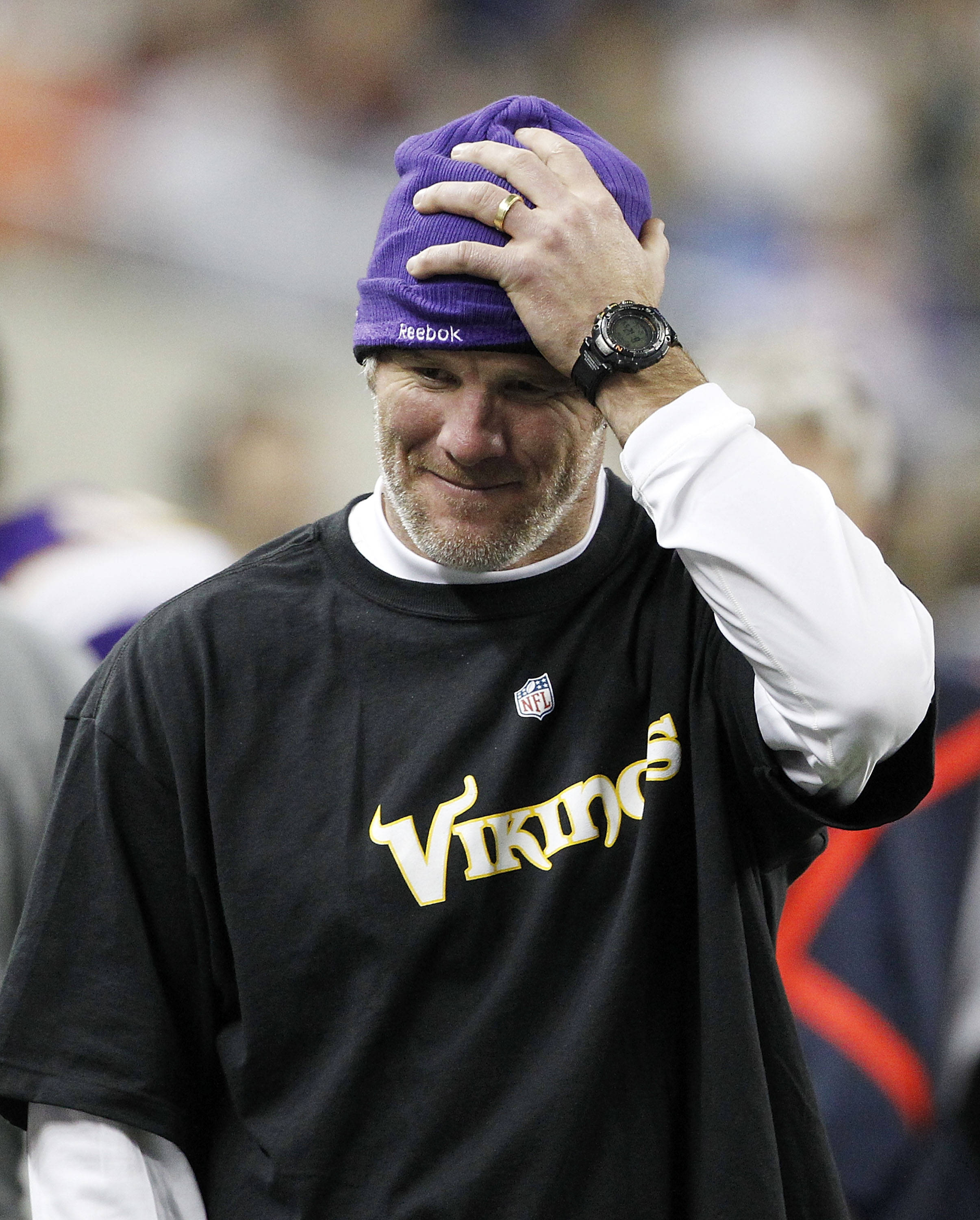 There are quite a number of teams in the NFL that could use a QB like McNabb. As either their QB situation is just not working, or they have players that are just to old to play. That's right Brett, I'm talking to you.

There is a ton of teams that need a QB like McNabb to turn around their franchise and get them back into playoff contention. Considering that there were teams scouting out McNabb before he was even traded to the Redskins, he should be able to find a team.

McNabb is the type of guy you bring to your team to make you immediate contenders. The Redskins brought McNabb in to try and turn a losing franchise around, when realistically they needed much more than just a QB.

There are teams that are contenders, but they are just lacking a QB.

This is where McNabb comes in.

5. The Redskins Can't Build a Team Around McNabb 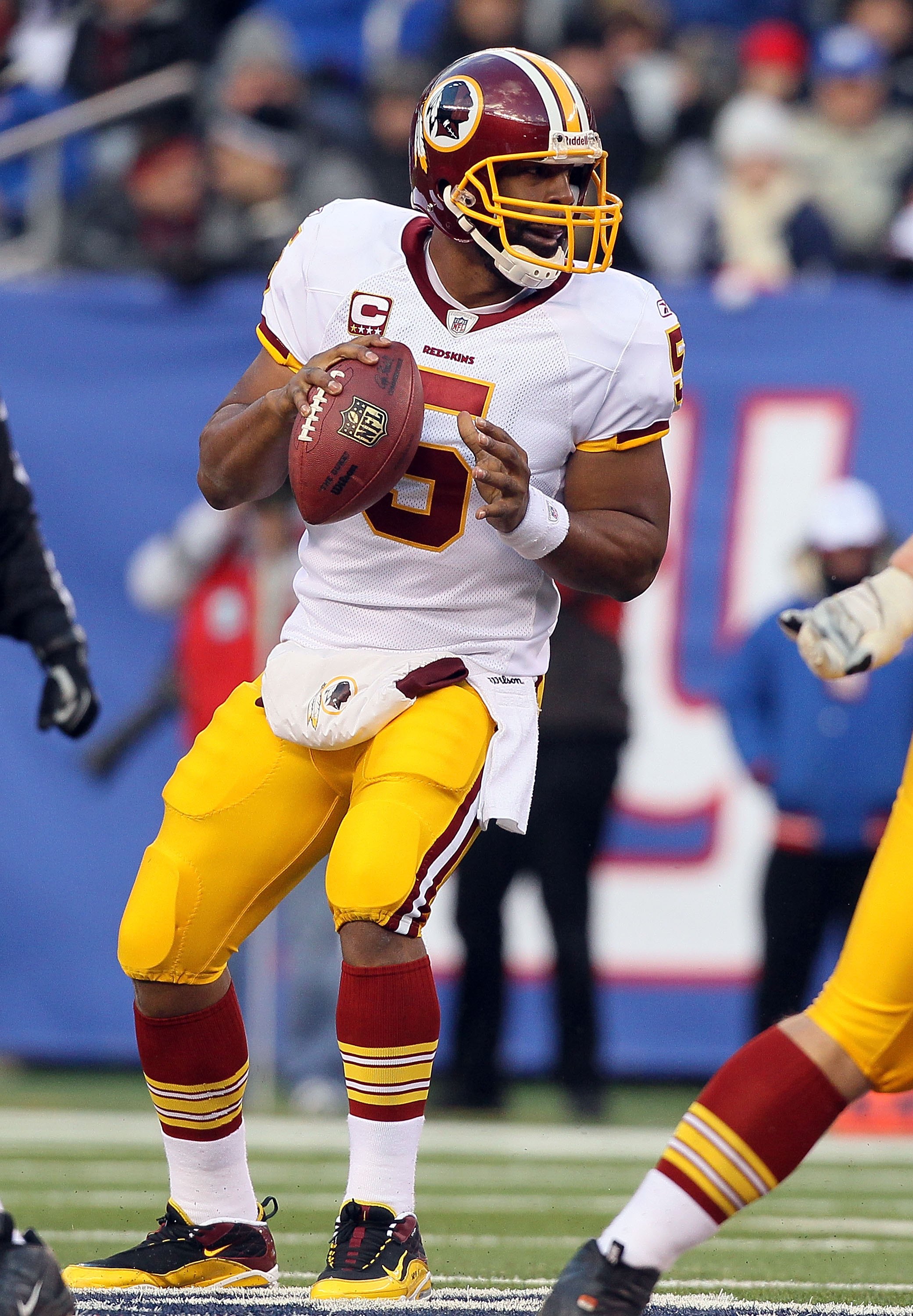 Donovan McNabb is going to be turning 35 next season.

That is not the type of player that the Redskins can build a team around. The Skins' are a team that needs a franchise player, and they need to be young. Not someone who is going into their last five or six seasons in the NFL.

I'm not calling McNabb washed up, but he is just not what he used to be.

Plus, Shanahan is already talking about looking for QB's in the draft, which would be a one way ticket out for McNabb. With all of the good rookies coming out of this years draft, it looks like McNabb is going to be on the short end.

If there are already talks of drafting a QB, it would seem that McNabb is going to be on his way out of Washington. 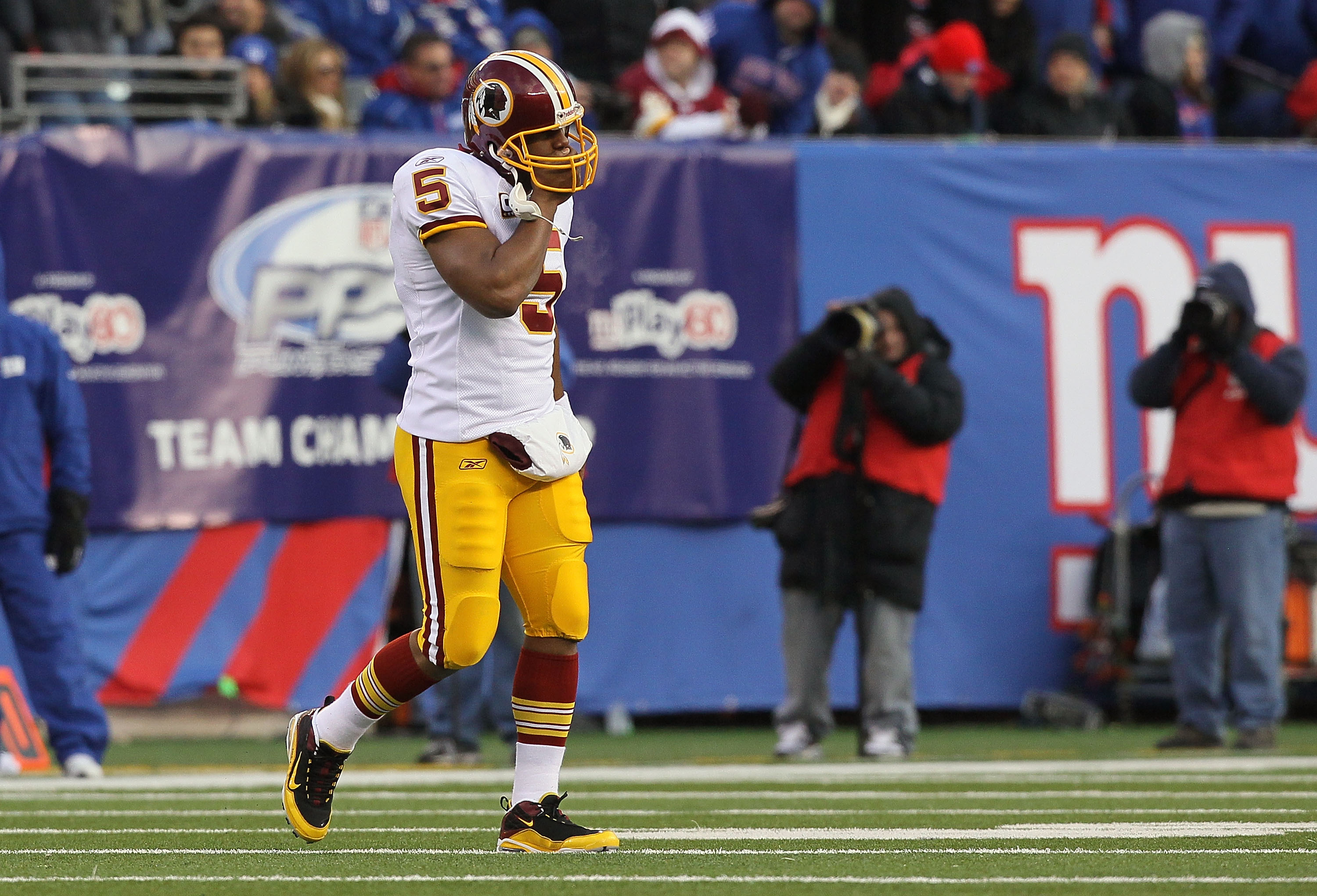 The only player that McNabb has been able to develop a good combo with is, Chris Cooley the Redskins tight end. Which is not necessarily a bad thing, but it is not what a QB needs to win games.

McNabb's best receiver is Santana Moss, who has really never been a legitimately good possession receiver in his entire career.

Could you imagine going from having Jeremy Maclin and DeSean Jackson, to having to throw to Moss and Cooley?

There is no comparison there.

Does anyone expect McNabb to make it work with his current team?

Not to mention how bad the Redskins' offensive line is. He is taking a hit almost after every single drop back.

This is not McNabb's game.

3. Worst Season Of His Career 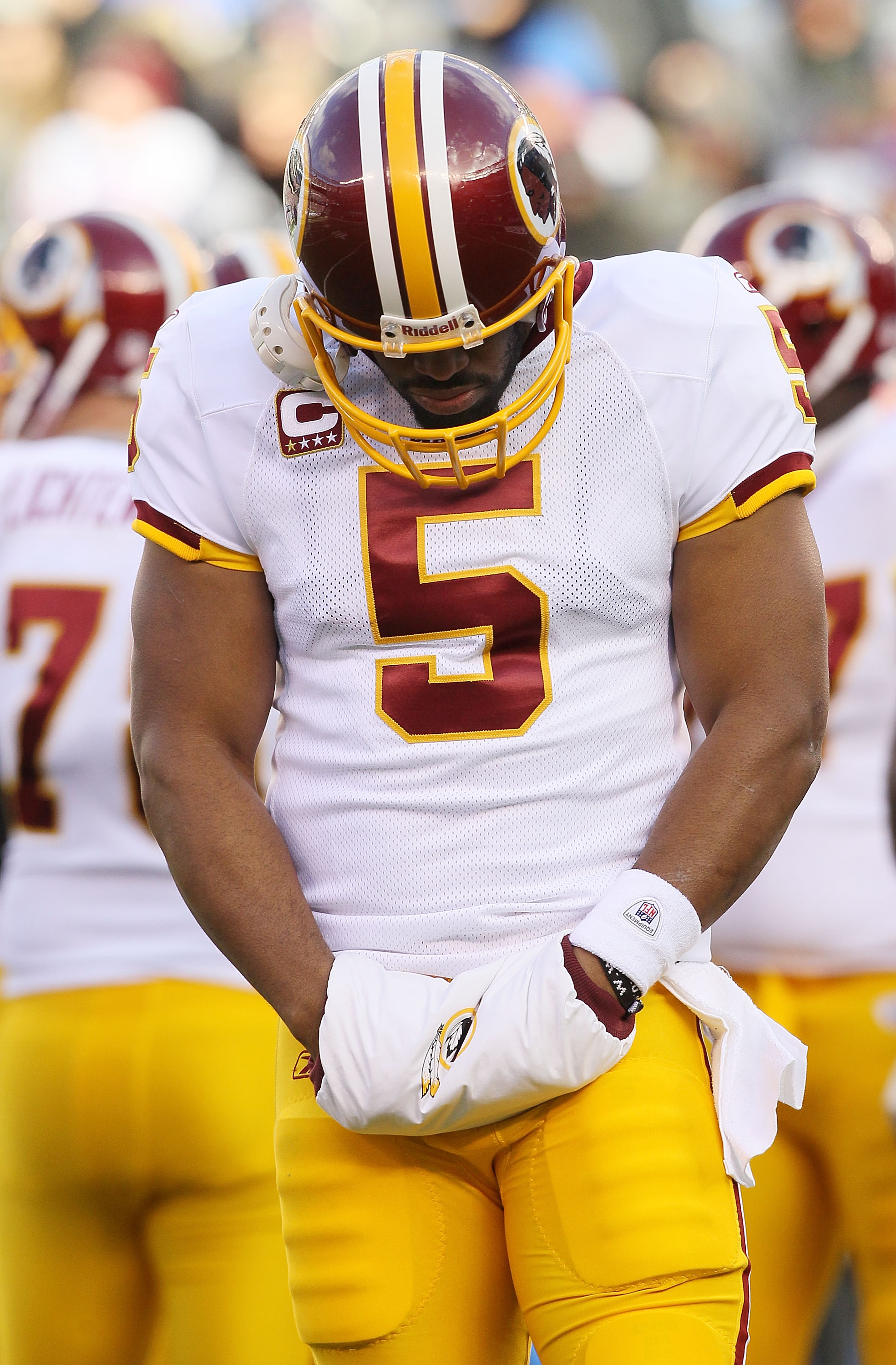 This is McNabb's first season in Shanahan's offense and he has really not had much time to adjust, but he still has had a pretty bad season.

If McNabb does not throw one more ball this entire season, he will finish this season with a 77.1 QB rating. The only time McNabb has had a lower rating is in his rookie season, where he finished with an overall 60.1 rating.

Whether you blame this on McNabb's personal performance, or other outside factors, he has not been able to get anything going in Washington.

It's tough for a starter that had so much success in Philadelphia to just fall apart in Washington, and have one of the worst seasons of his career.

You know McNabb wants to improve from what he has done this season.

2. Lack of Trust In McNabb 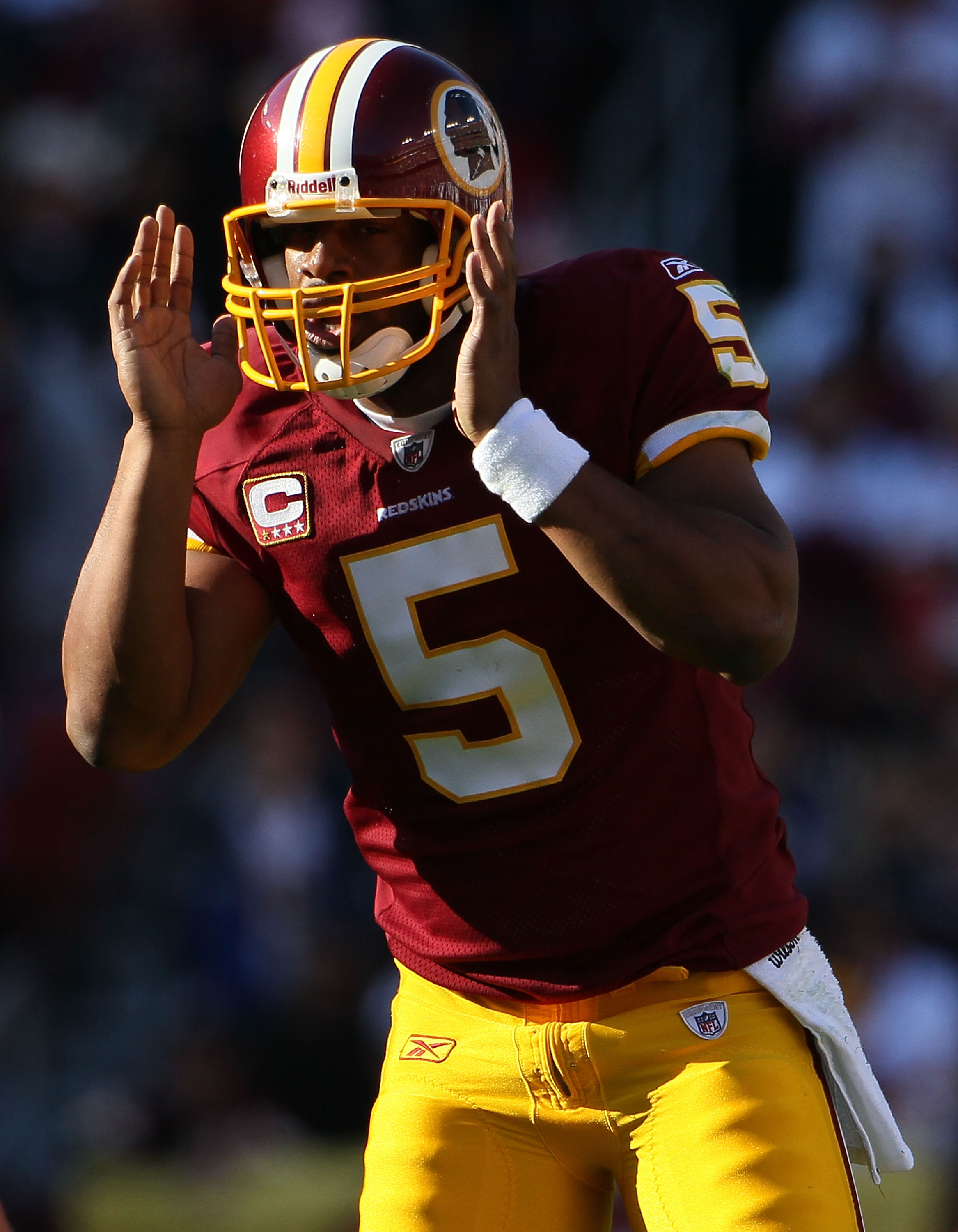 This is the second time this season Shanahan has elected to bench McNabb, except this time it is permanent.

Earlier in the season, Shanahan decided to bench McNabb in a game against the Lions on the Redskins last chance to win the game. Everyone was shocked to see that Grossman came out onto the field, and McNabb remained on the sideline.

Following the game, Shanahan would not give the media a straight answer, and just began throwing out random reasons. About a week later, Shanahan admitted the reason he did not let McNabb play on the last drive was because he was having a bad game.

Now, Shanahan is not even going to let McNabb finish out the season.

There is a real lack of trust and it is showing in McNabb's play.

This is the first time in McNabb's career where his head coach did not have full trust and faith in his abilities. Shanahan's coaching style and the way he has treated McNabb this season has created an uncomfortable and difficult situation.

1. McNabb and Shanahan's Relationship Is Destroyed 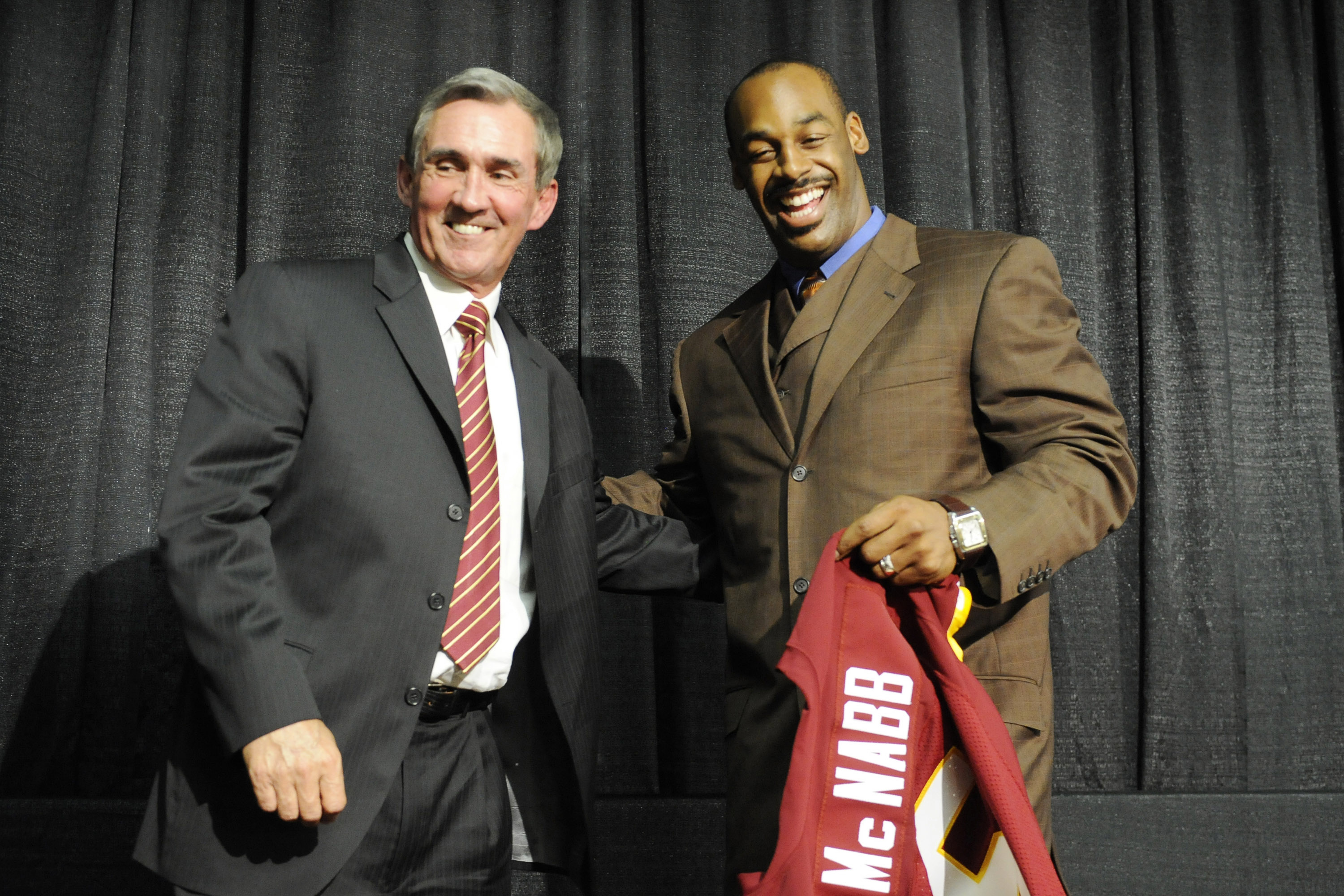 I think that from the beginning Shanahan didn't like McNabb in Washington.

I think that Shanahan did not belive that McNabb could get the job done.

I think that Shanahan is looking for other QB's at any cost.

I think that Shanahan will throw McNabb under the bus to save himself.

It has reached the point over the course of the season in Washington, that this relationship is beyond repair. These two guys are just never going to mesh. No matter what happens at the end of this season, it is just not going to work between these two guys.

Ranging from the lack of trust, to the fact that Shanahan is on the hot seat in Washington, things just didn't work out. It's a shame to see a QB like McNabb not work out in a team that needs so much help, and it may go down as one of the most failed experiments in NFL history.

The way this whole thing is going to shake out is, McNabb is going to leave at the end of the season. Even if Shanahan goes before, McNabb will still want to leave. His entire career in Washington has been tainted and there is just no way to recover from something like this.

With all of the teams interested in McNabb, his career is far from over. It's just done in Washington.