The Titanic Sinking Of The Denver Broncos: 10 Changes That Will Right The Ship 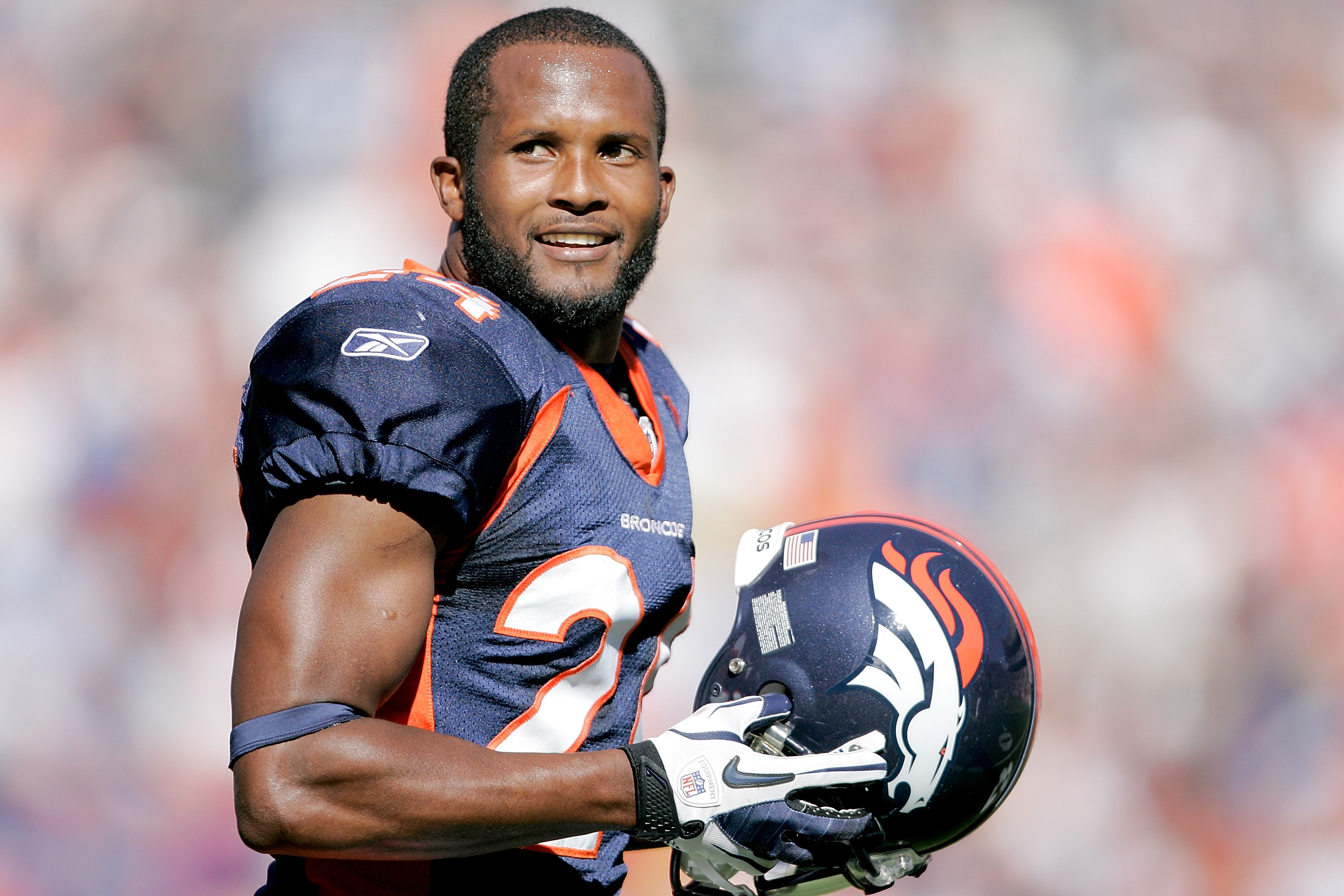 Being a 35-year fan of the Denver Broncos, watching this season unfold has been a painful experience I never thought I would have to witness. The Orange and Blue has looked tattered and faded over the past decade but hit an all-time low this year.

What is wrong right now, almost every casual or fanatical fan can discuss in lengthy and sordid detail. But just identifying what is wrong is only half the solution.

What I will focus on is what can be done to correct all these issues.

It Starts at The Top and In The Back Office: Separating The Power 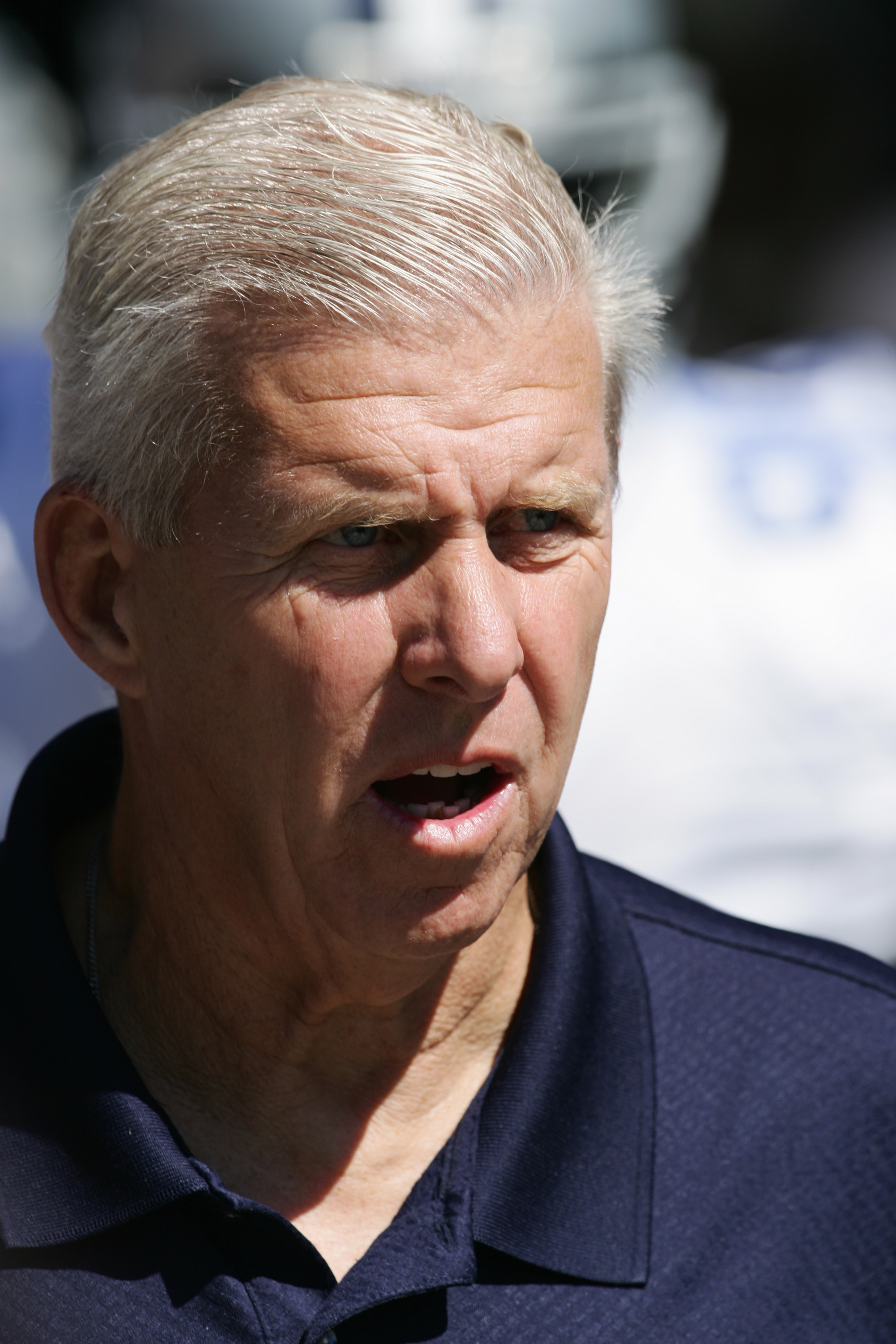 Following NFL football and particularly the Broncos the past 7 or 8 years, it has been clear that when too much power has been placed in one person, things go wrong.

Back when Mike Shanahan first became head coach and Vice President of the Denver Broncos, things weren't quite as complex in the 21st Century NFL as they are now. He had virtually total control over all things Broncos, from the draft to salaries to the type of toilet paper in the locker rooms.

And this approach continued through the short (but painful) reign of terror of the Josh McDaniels era. Once again, too much power and decisions flowing through one person.

The solution: Bring in the TUNA!

Bill Parcells has proven his ability at all levels of the business that has become big time football. From his playing days at Wichita State to his first assistant coaching job at Hastings College, Parcells has steadily risen through the ranks. His first head coaching job was at the Air Force Academy just south of Denver.

The Tuna then rode the roller-coaster of coaching in the NFL, starting with assistant jobs with the Patriots and Giants and then his first head coach appointment with the Giants.

While the head coach of the Giants, Parcells guided them to two Super Bowl wins,one being over the Denver Broncos in SB XXI and then the famous Buffalo Bills "Scott Norwood Wide Right" FG finish in SB XXV.

After a short two year hiatus, he returned to be the head coach of the New England Patriots. Through his coaching days with the Patriots, He rebuilt the team and took the Pats to SB XXXI, losing to the Packers. He then left the New England over issues surrounding not having enough player personnel decisions.

He then moved on to the Jets as an "advisor" to circumvent his contract issues with the Patriots before assuming head coaching duties there. He turned around the Jets and eventually lost to the Broncos in the 1998 season when Denver went on to beat the Packers for their first Super Bowl win. He then moved upstairs to become the general manager for  year before leaving to coach the Dallas Cowboys.

This has shown a tempestuous but successful approach to the game and the business of football in the 21st century. His player personnel decisions are legendary and his drive and commitment to winning is just what this franchise needs at the reins of football operations.

His hiring will bring immediate credibility and stability to the critical role of General Manager and will help bring in the right coaches to get the on-field job done. 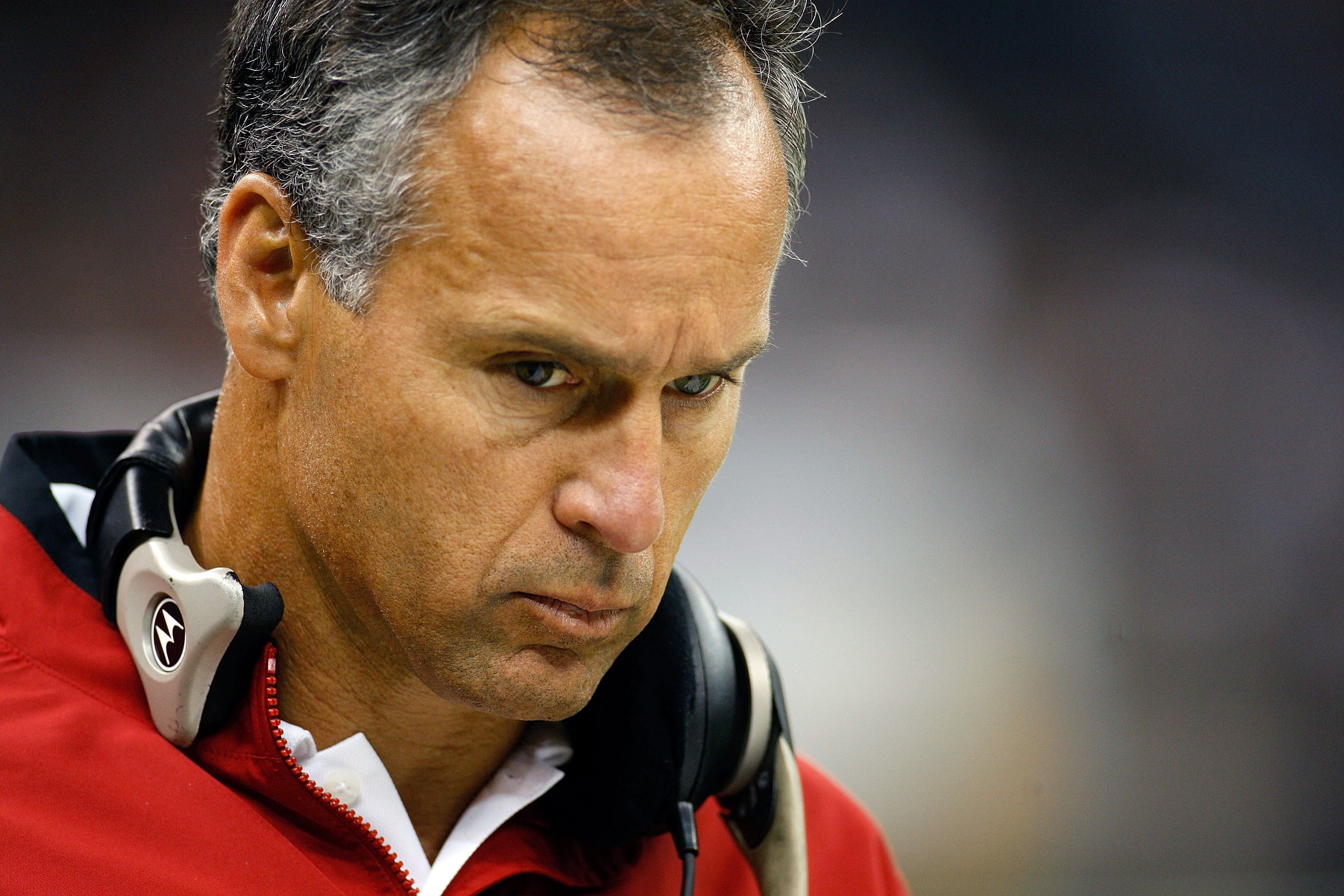 With his one year stint as the defensive coordinator in Denver, where he engineered the move to the 3-4 defense and made a significant change in one year, Mike Nolan has shown that he can drive an innovative and effective defensive focus that is totally lacking right now on this team.

Throw in his head coaching experience at San Francisco and his current work as defensive coordinator at Miami, his relationship with Parcells there and his focus on the defensive side of the ball will create the foundation to begin the resurgence of the Orange Crush in Denver.

No longer will there be wasted picks and trade-ups on the offensive side of the ball (Thomas, Tebow, Quinn, etc.); the focus will be on rebuilding the defense to bring stability and restore pride in this franchise.

With the two-headed dragon of Parcells and Nolan, there will once again be reasons to roar loud and proud in Mile High Stadium.

No Offense, But This Is The Answer To The Offensive Issues 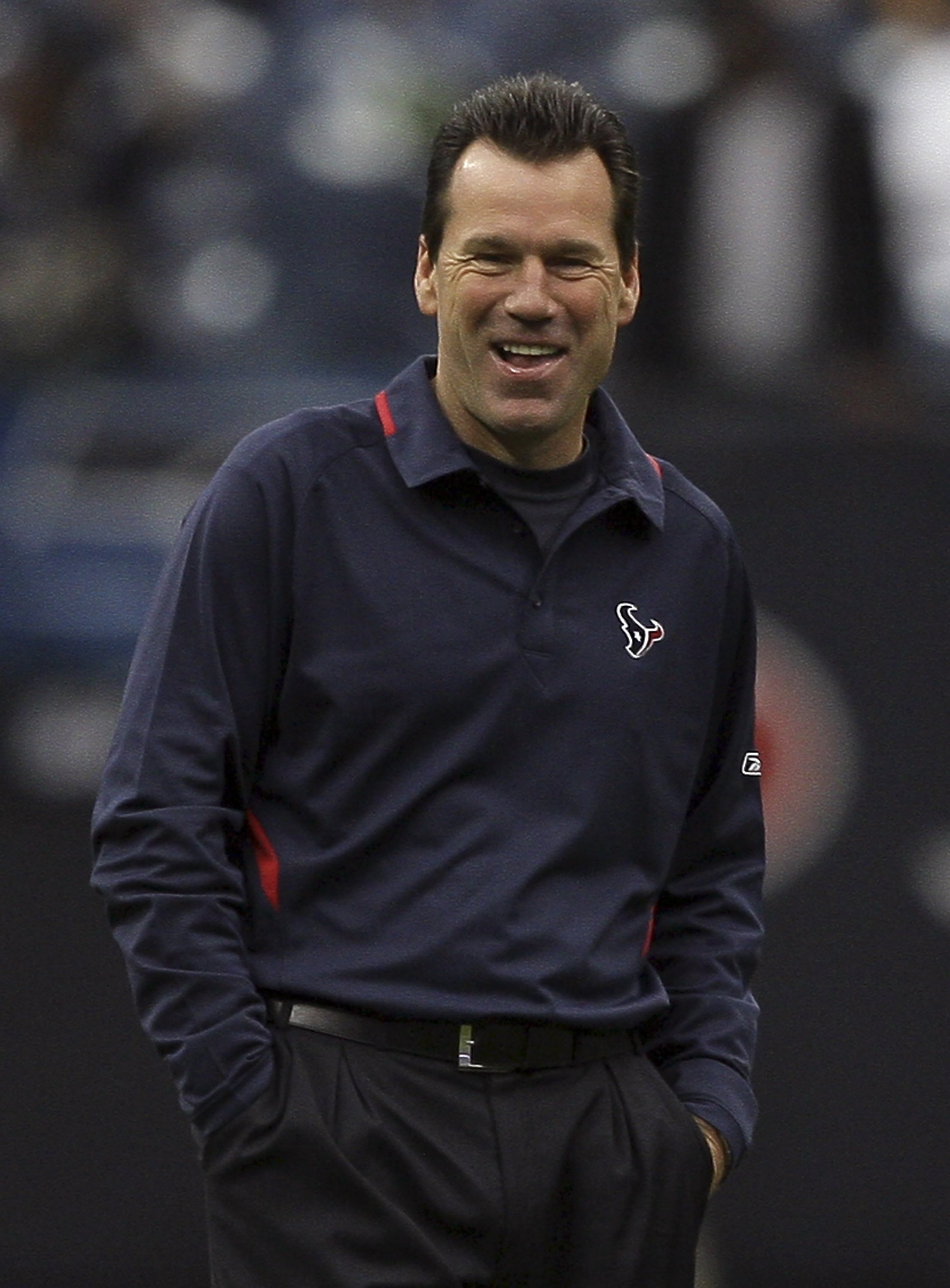 With the real possibility of his being fired as head coach in Houston, focus all your guns, Mr. Parcells, on getting this man back to Denver.

Besides being the best liked backup QB in Bronco history, he was the stabilizing force and go-between for John Elway and Mike Shanahan.

Whether it is working with a veteran QB or a rookie, he has the tools, the experience as a QB and the temperament to make it work.

'Kubs' is smart, hard-working, loyal and I think, given the right opportunity in Denver, would accept the role and would excel.

And with his youngest son a QB for Colorado State University just up the road, he should jump at this opportunity to work again in Colorado.

And come on, folks, with a smile like that, how could you not want him on your side?

Driving The Defense Back To The Top 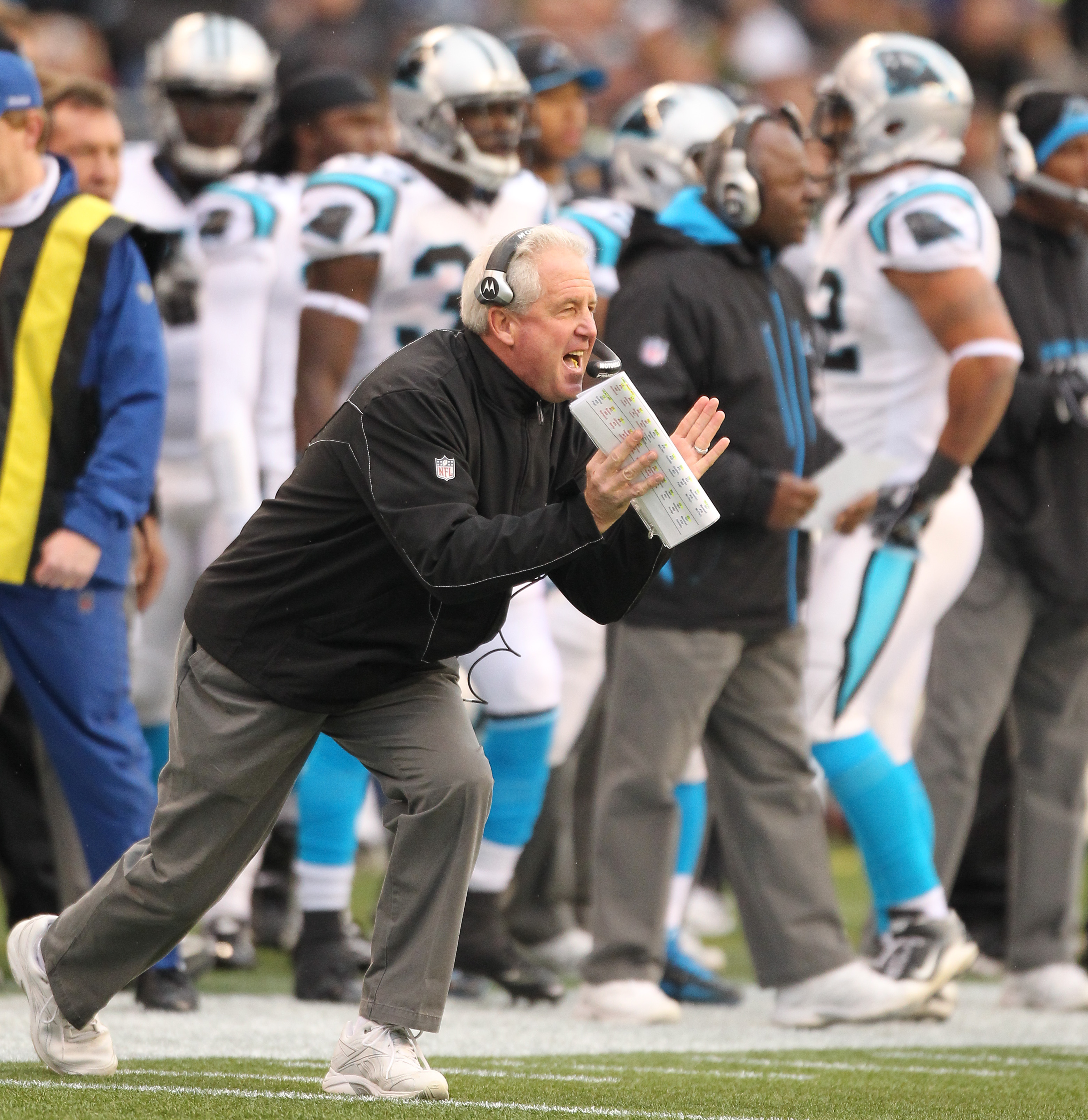 Like Kubiak, John Fox may very well be let go as the head coach of the Carolina Panthers at the end of this season.

And if he is, grab him and let him rebuild the Broncos defense. He has the drive, the talent and the ability to take this side of the ball to a whole new level. He was a pretty good head coach but will be a GREAT defensive coordinator.

We will see a meaner, tougher and more successful Orange Crush than has been here since the original Orange Crush.

Do ANYTHING To Bring Back Champ Bailey 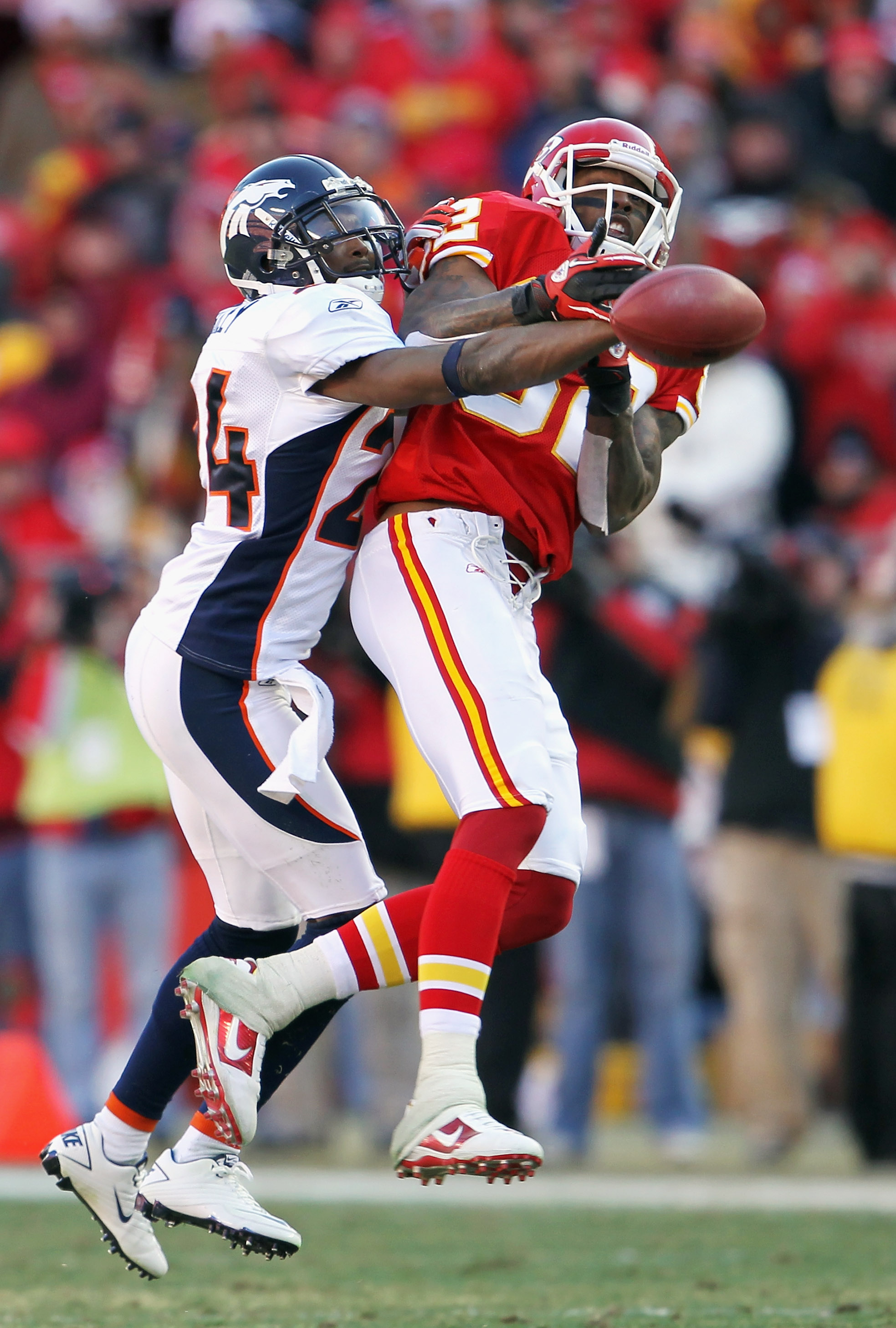 The way that the Broncos have handled the Champ Bailey contract issue has been embarrassing and truly disgusting. Bailey is a future Hall of Famer and maybe the classiest and best CB to ever suit up for the Broncos.

Even though he may have lost a half step, he is still one of the top five or six cover corners in the NFL. If anyone watched the past two games, they will have seen what a true shut-down CB looks like.

And he has even agreed to consider a move to Safety in a few years when he no longer can play man-to-man. And he will be a tremendous Safety, just as he is a CB.

Add the fact that he is one of the leaders, both on and off the field for this team and there is no fathomable reason for him to not be back with the Broncos, assuming there is a true commitment to turning the defense around.

He can be a mentor to the young talent in the secondary and will provide the stability we need to bring back the pride. 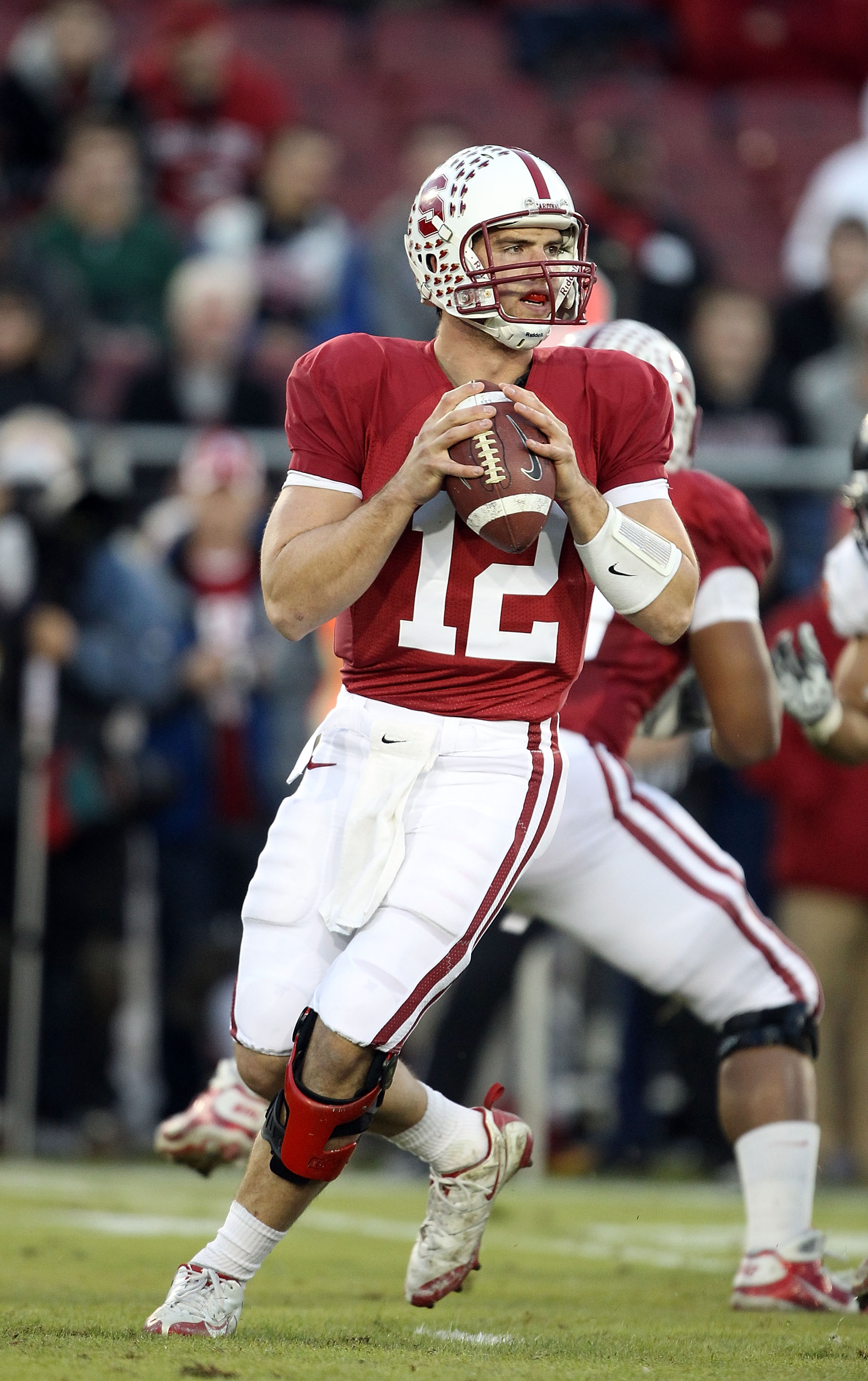 Given the fact that the new regime in Denver will most likely want to have their own QB in place, it is probably a forgone conclusion that Kyle Orton will be traded.

Given that, and the fact that Brady Quinn doesn't seem to be starter material, there needs to be a major change here.

I suggest that the best thing that could happen is to package Tim Tebow and a draft pick to get the rights to Andrew Luck of Stanford. He will undoubtedly be the first pick and will require a lot of money to sign but will be well worth the investment.

He is smart, big, tough, athletic and will most likely will be the next great QB to play in the NFL. He has the size of Ben Roethlisberger but with more mobility and running ability. He also has the arm to get the ball down field on a deep route and can throw a frozen rope on a 20 yard out pattern.

He could very well be a starter in his rookie year, like Sam Bradford but with even a better arm and the aforementioned running ability. And did I mention smart? He is an engineering major at Stanford!

In short, the perfect player to build the Denver offense around for the next decade.

Trade Up To Get Nose Tackle Nick Fairley 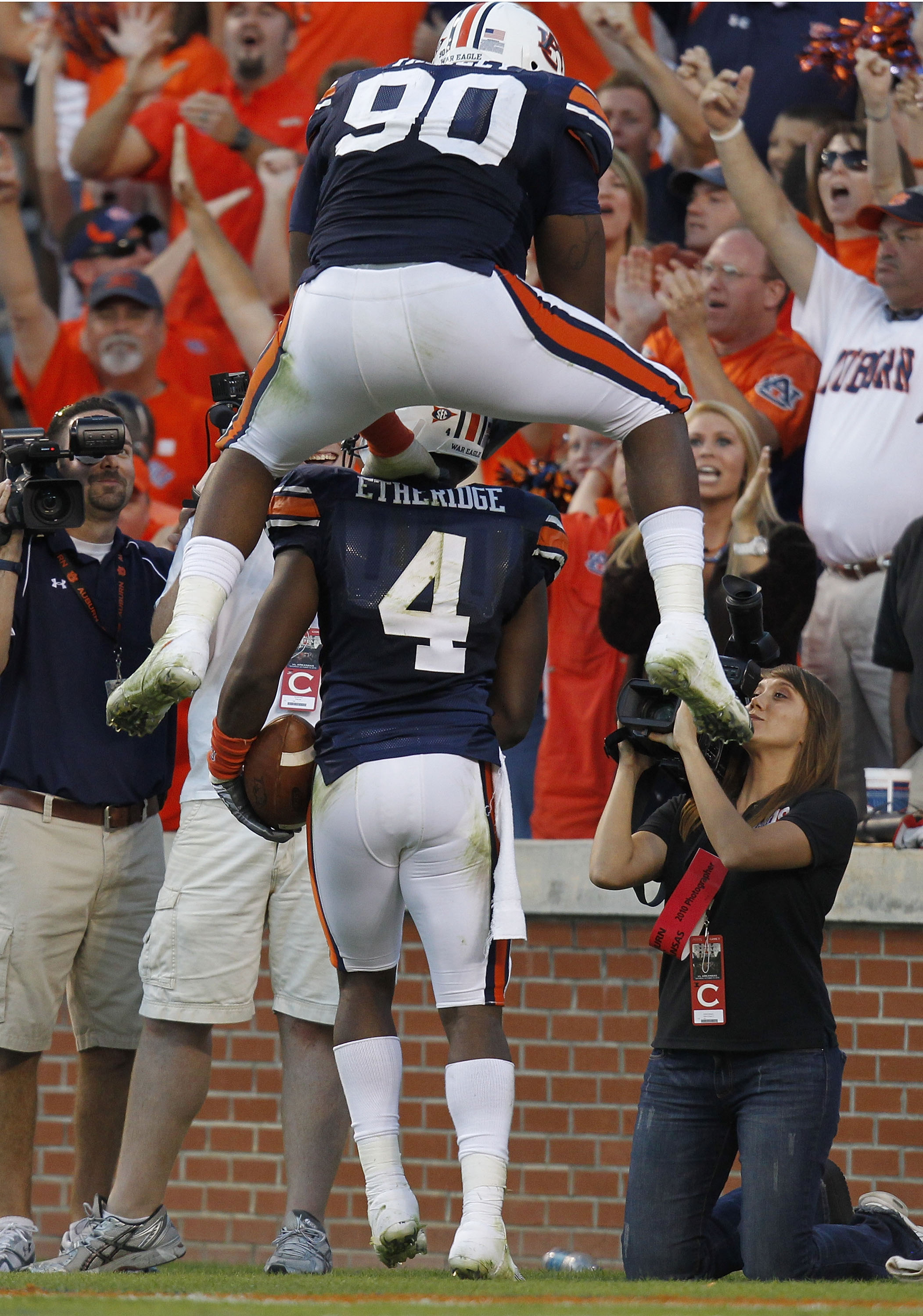 To say that Auburn's NT Nick Fairley is a beast is an understatement. At 6'5, 300 pounds and the agility and foot speed of a Suh, he will be a star in the middle of the Denver 3-4 defense.

He combines speed and athleticism (See the picture) and has the frame to add 10-15 pounds without sacrificing much on the speed or quickness side.

Fairley can stop the run, push the pocket and make sacks.

He will be the anchor of the Denver D for years to come and will redefine the position of the NT in the 3-4 defense. 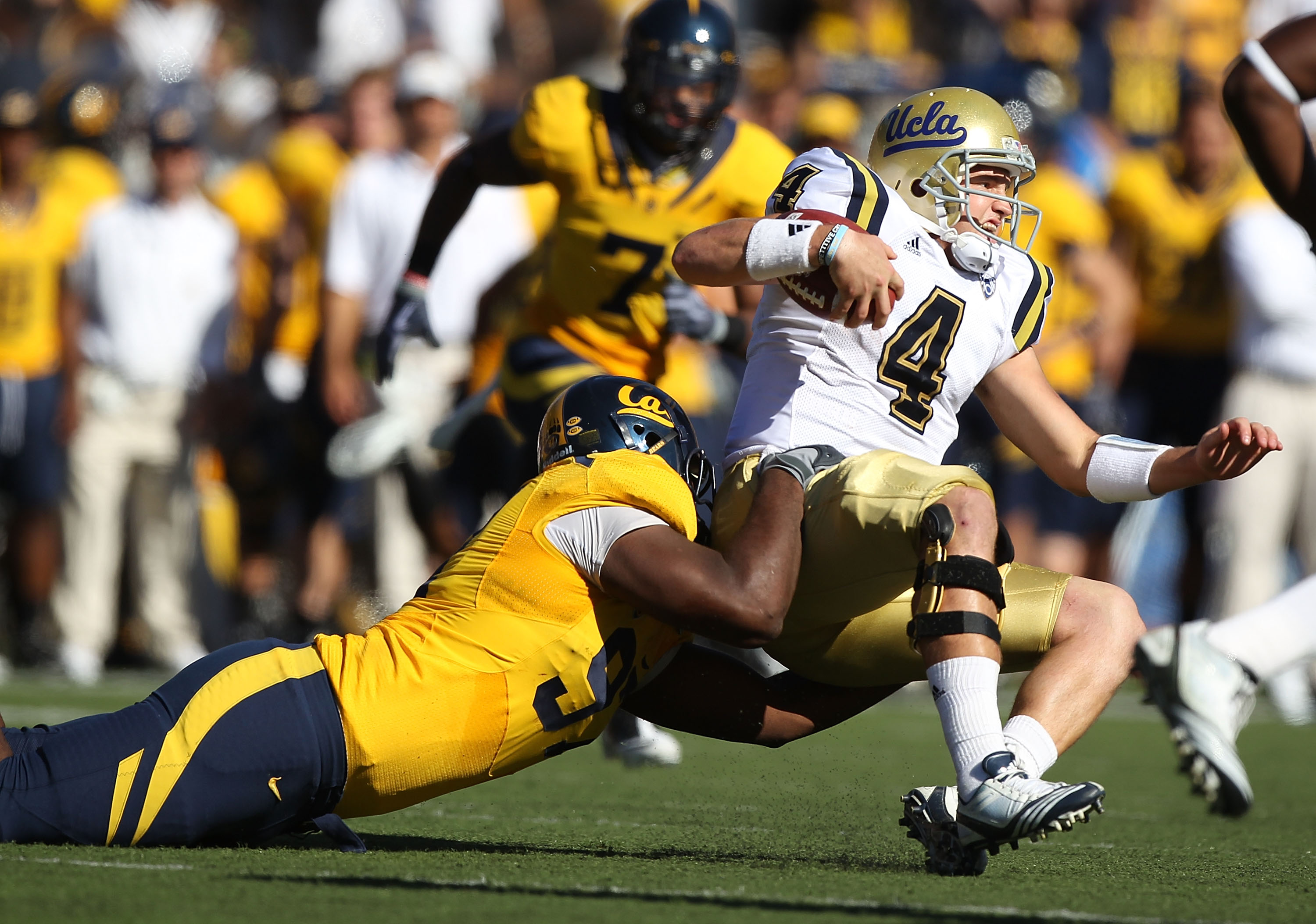 Either of these guys would bring a huge trade-up in the defensive line play for the Broncos.

They both have the speed and strength to play the run and the pass and the ability to get bigger and stronger.

With the quality linebackers already on the team, the defense will show a big jump in the first year with either of these studs on board at one DE position. 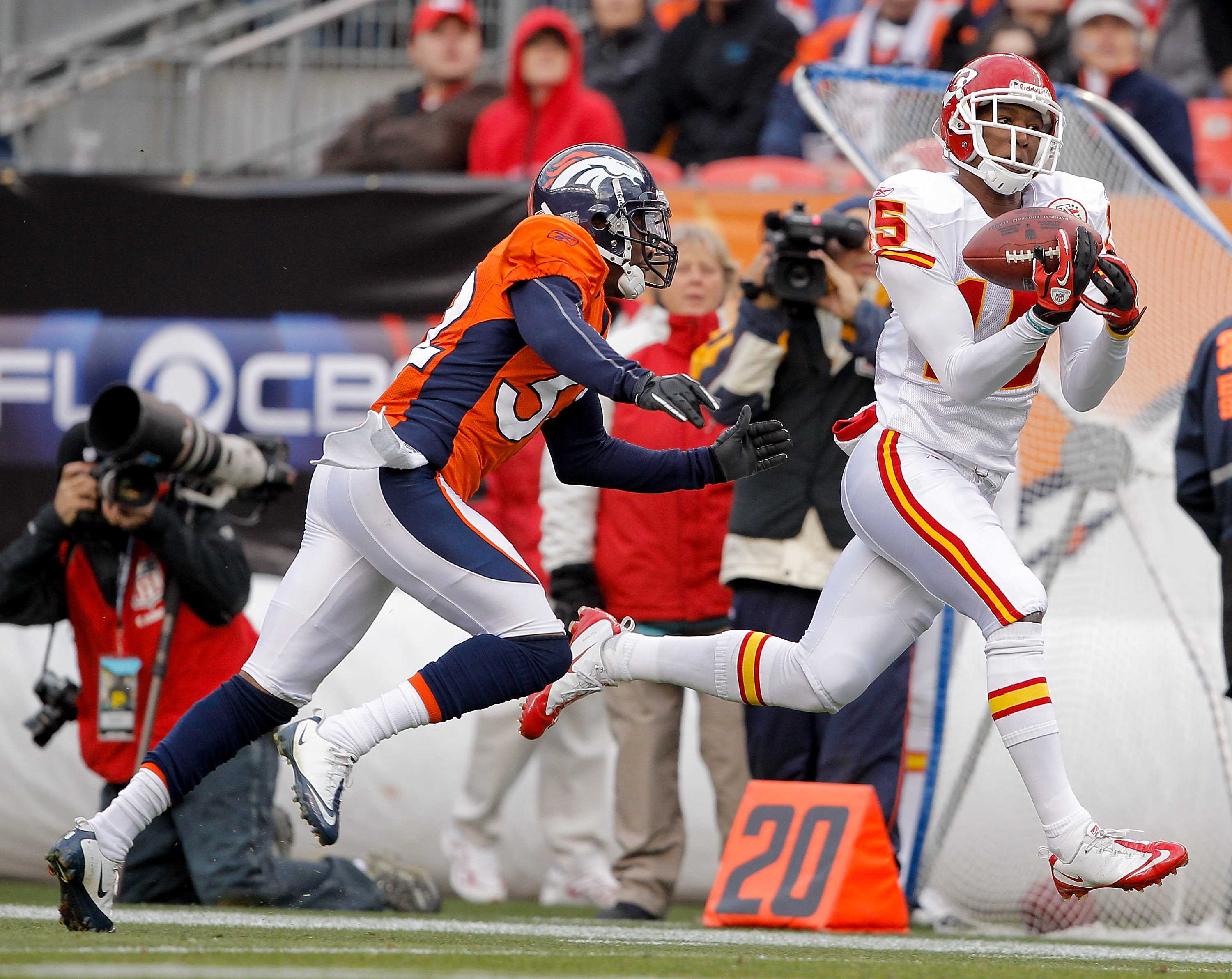 After his recent off-field issue and his inconsistent play on the field, it is time to cut this guy loose from the Orange and Blue.

With Syd'Quan Thompson and Nate Jones backing up Champ and Andre Goodman, we will be able to hold down the fort at the corners.

Plus, there is the possibility of picking up a late rounder, like Thompson was last year, to add some more depth.

Even though Josh McDaniels talked a good game about wanting "character" guys o the team, he blew it with this pick.

Bring Back The Orange Crush Jerseys 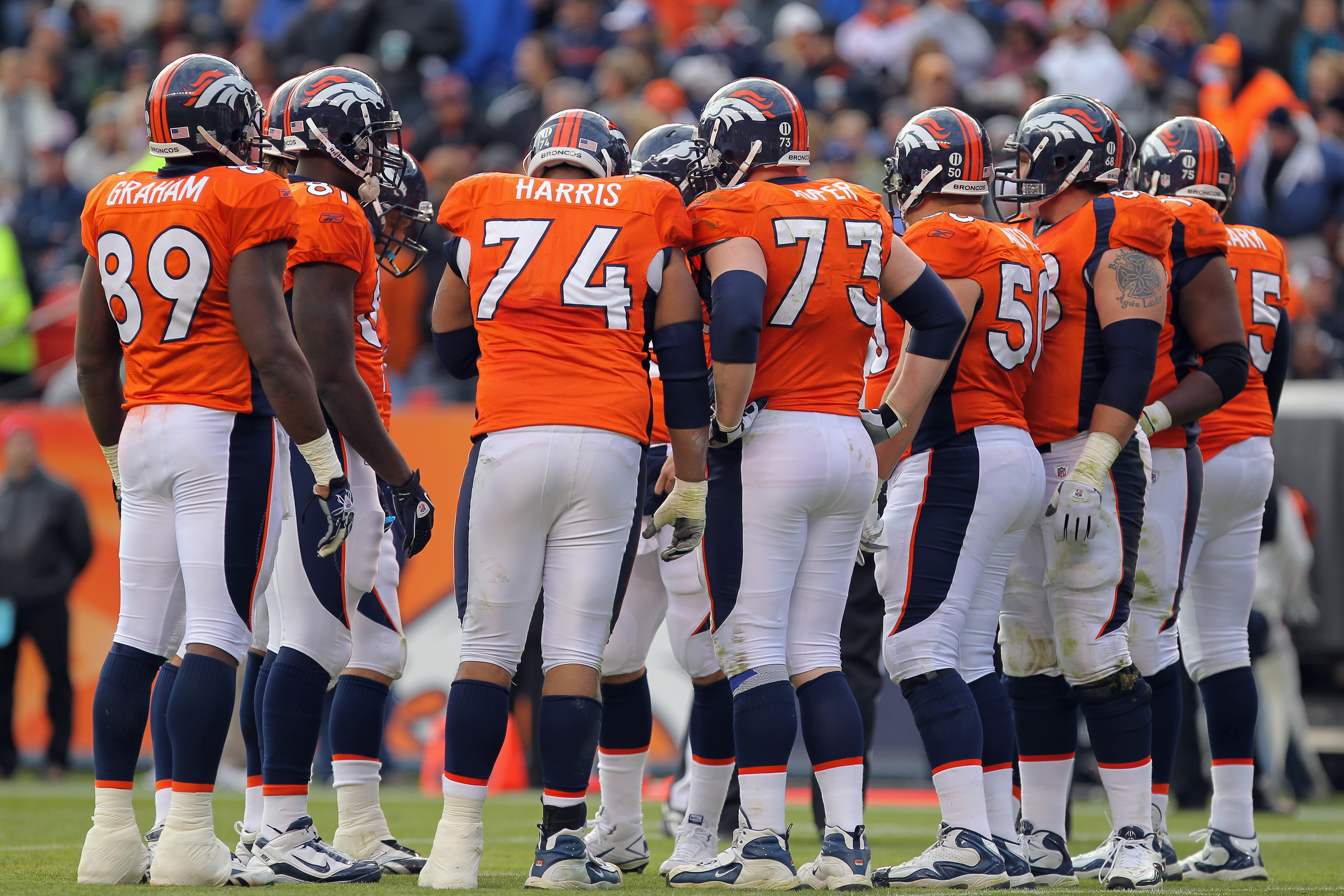 Of all the above-mentioned changes, this would be the easiest and would begin to bring back the pride that this franchise has had for so many years.

These would be the home jerseys and sometimes the traveling jerseys (like at Dallas, where they wear their white jerseys at home) and the blue jerseys could be the alternates.

And making this announcement when we announce all the changes I propose in this article, it would be a great way to kick start the new era of championship football in Denver.