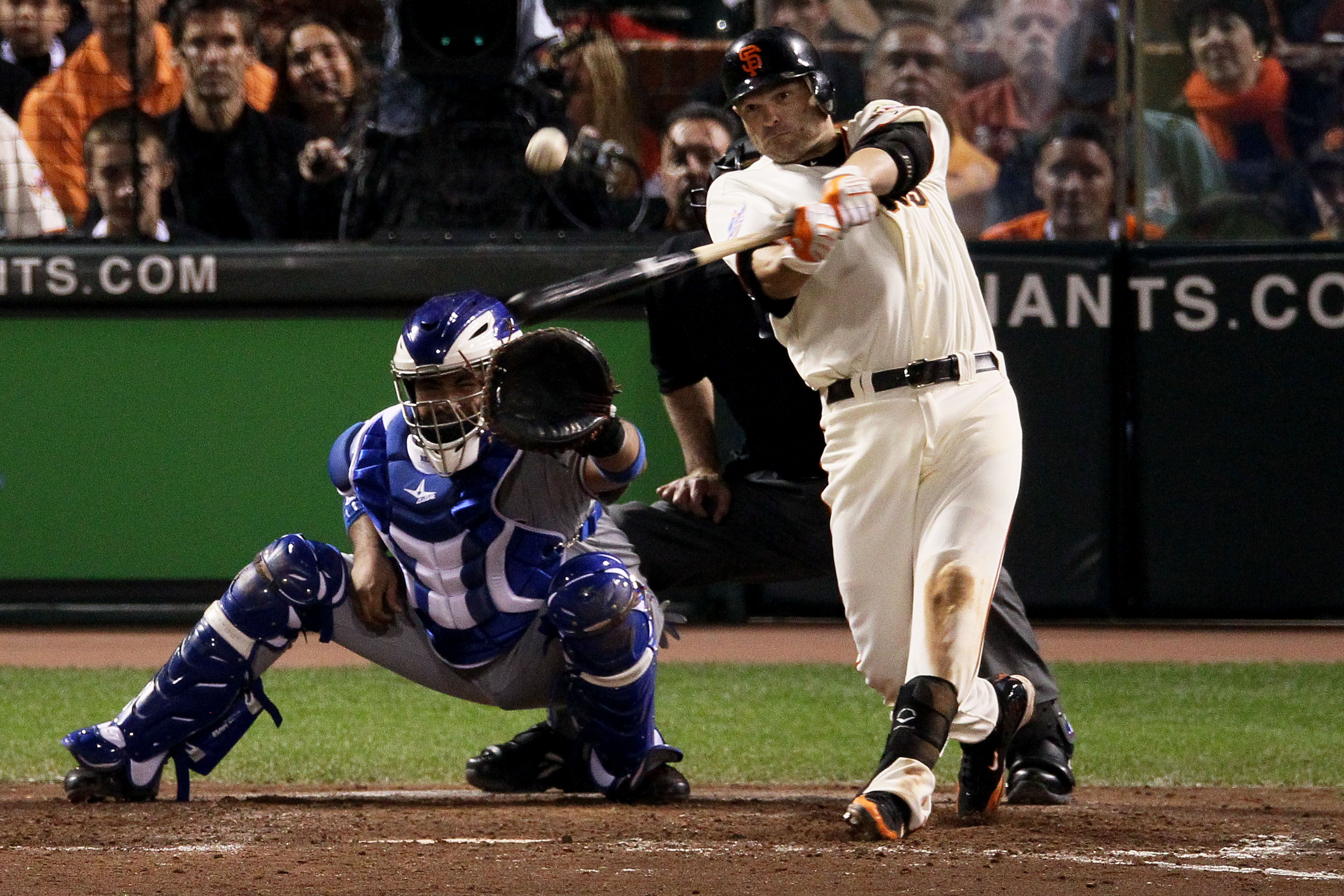 Game 1 of the World Series had all the feel and all the hype of NLCS Game 1, except now one of the greatest potential postseason pitchers (Roy Halladay) had been replaced by the third greatest postseason pitcher of all time in Cliff Lee, who had posted a 7-0 record with a 1.25 ERA, third to only Sandy Koufax and Christy Mathewson.

Tim Lincecum had similarly shown that he was no postseason slouch, posting a 2-1 record with a 1.98 ERA. His opener was an electric 14 K complete game two-hit shutout.

Critics, pundits, fans and media everywhere were calling for a pitcher's duel for the ages. As put slightly sarcastically by ESPN, it was going to be a 7-13 minute game, and they would flip a coin at the end of 48 innings.

If you gave everyone an over-under on three total runs scored, there would have been a fair amount of people calling for three, and everyone would have called the under on five.

However, there is not a person on the planet that called for a total of 18 runs, of which 11 would be given up by the starting pitching of Cliff Lee and Tim Lincecum. Then the two most effective bullpens in the postseason went on to give up a total of seven runs in 6 2/3 innings.

So, WHAT HAPPENED? Let's find out.

What Happened to Cliff Lee?

The picture tells everything. Cliff Lee's brain was trying to stay calm, but his body was not complying. The pitches he wanted to catch corners were either not tantalizing enough to get swung at or too fat to be missed. He could not get a big out, heck, he couldn't buy one. He couldn't even get a loan to get a big out, even with his projected salary for next year.

His curveball decided it didn't want to show up for work. He only threw 11 of them in his 104 pitches, and only three were thrown for strikes. And his ability to break bats with that wicked cutter, well, let's just say Mariano Rivera is still king. The only bat I saw shattered was a Freddy Sanchez double, and it was on the outside.

First pitch strikes were one of the aspects which made Lee so dominant, and he was 11-of-24 when the fifth inning rolled around—less than stellar. This translated into nine of the first 11 Giants hitters seeing at least five pitches.

Now, as a primary National League fan, I didn't know a whole lot about Cliff Lee, and although I still don't really know what makes him dominant, I certainly do know how he gets in trouble.

What Happened to Tim Lincecum? 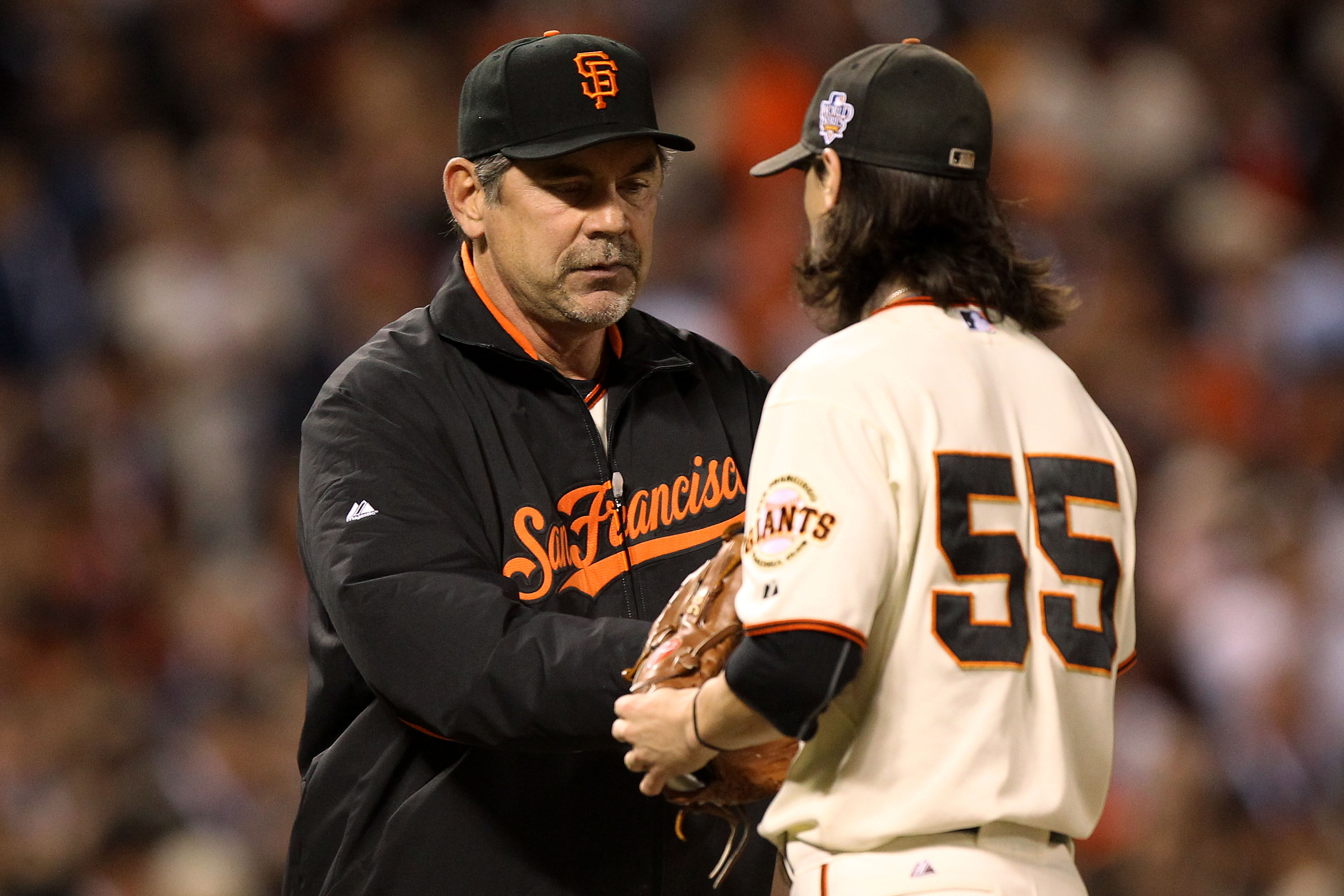 The strikeout king was having trouble locating the "K" in FreaK. He only fanned three Rangers in five-and-two-third innings, while walking two. He gave up eight hits and seemed like he was in the stretch the whole night.

He could not throw his fastball for a strike early in counts, making him throw the specialty pitches over the plate. Therefore, he was unable to get the swing and misses that have made him famous. He was behind in counts and behind in innings, throwing a lot of 1-0, 2-0, 2-1 pitches and many of them from the stretch.

However, the reason why there wasn't a Big Time Timmy Jim Implosion was the fact that he got the big outs. No damage was done with two outs, runners were stranded all over the place and a potentially catastrophic first inning was eliminated by a double play.

He bore down long enough for an insurmountable lead to be built and lasted long enough to put minimum effort on the bullpen.

Still, by no means did Lincecum hold up his end of the pitching duel for the ages, he just did it better than Lee did.

What Happened to the Giants Offense? 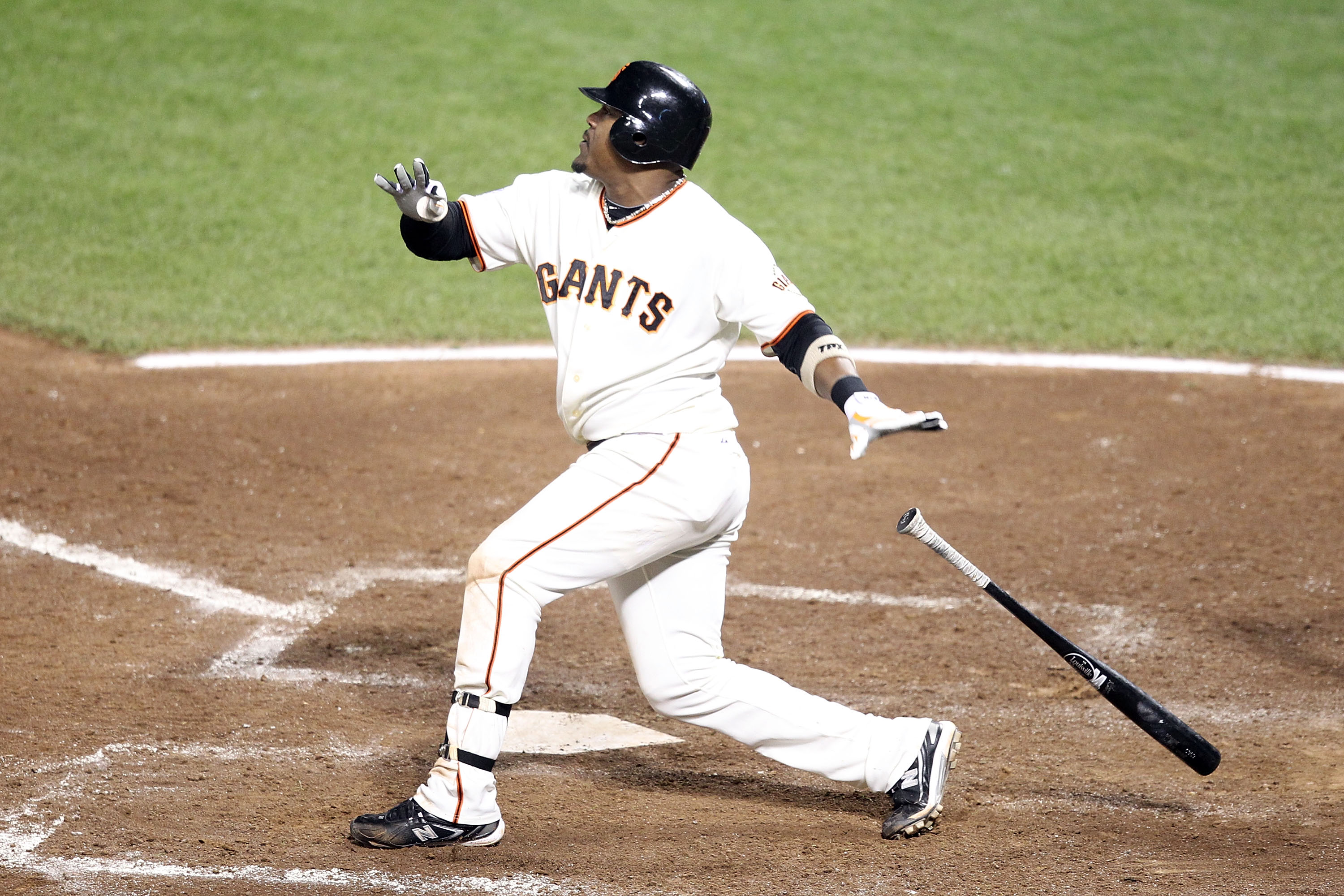 Let me first say, I mean What Happened? in the best way possible.

Even though this swing by Juan Uribe ultimately capped the offensive explosion by the Giants and defined the night; it was by no means all that the Giants had to offer. Fourteen hits were recorded and 11 runs crossed the plate. Freddy Sanchez had three doubles in his first three at bats, and a total of six doubles were hit by the G-Men.

However, the most eye popping, smile spreading, head scratching, double clutching, sleepless night inducing statistic was the six runs scored by the Giants with two outs, five of which were recorded in the fifth inning with only a runner on second base when the second out was recorded.

And with runners in scoring position, the Giants were 9-17, including 5-10 against Cliff Lee, where opponents were 2-17 in this postseason.

In order to score that many runs, the Giants also avoided rally killing plays, namely the double play, which has been their bane all year. Only one was recorded by the Rangers, which was in the first inning.

Those are some impressive statistics for a mediocre offensive team. But the definition of a good offense also includes the ability to sustain offense game in and game out, so let's see how it works out.

What Happened to the Rangers Offense? 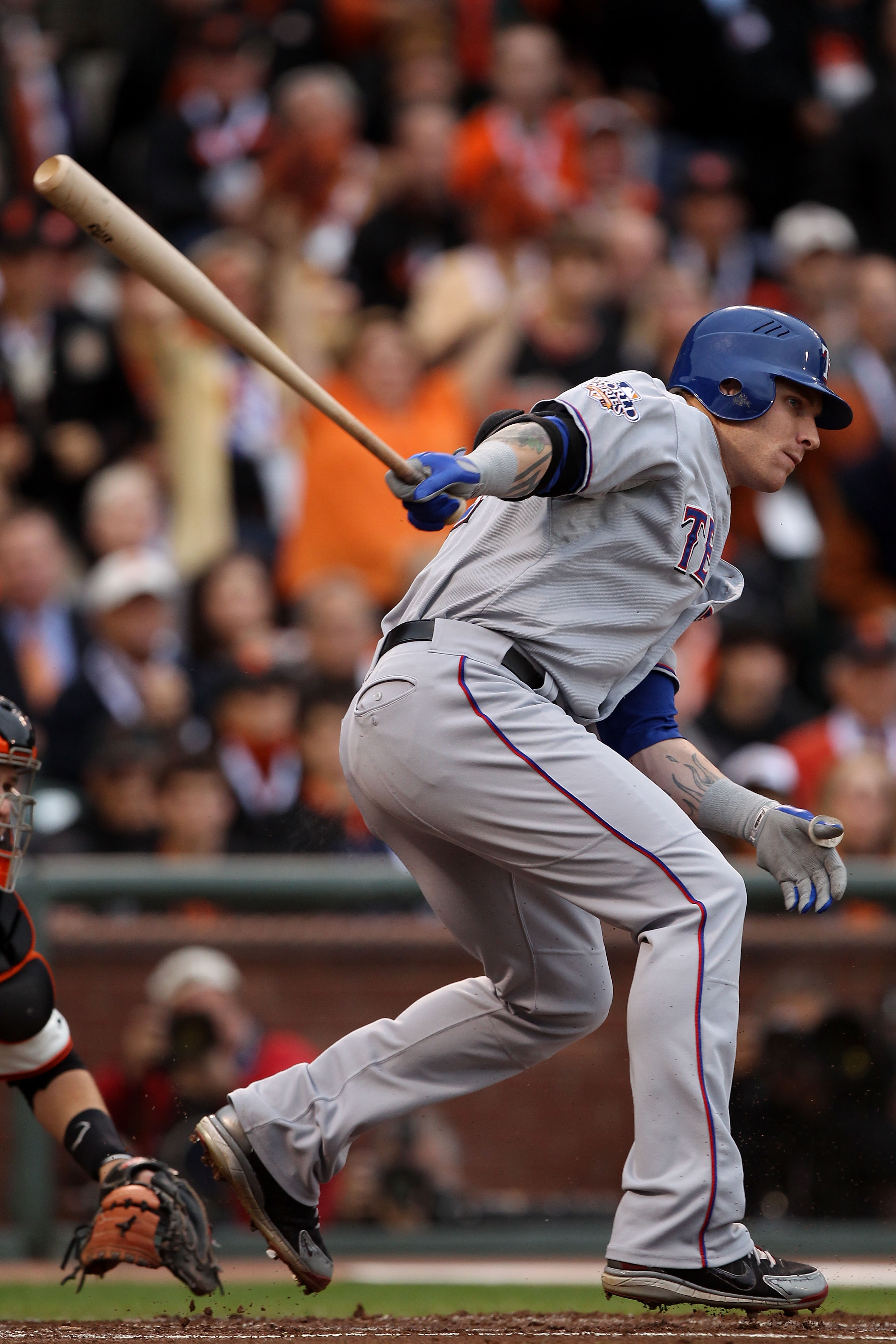 Obviously, scoring seven runs is nothing to scoff at and indicates a rather competent night with the bat. However, they still lost, and the offense is to blame—at least slightly.

In the first two innings, the Rangers jumped out to a 2-0 lead, a commendable accomplishment against Tim Lincecum. However, the damage could have been, and should have been, much more painful.

The Rangers had first and second, no outs, and Josh Hamilton up in the first, but only got a sacrifice groud out.  They then loaded the bases, and Lincecum had yet to locate his fastball and was leaving his changeup high in the zone. He looked completely brain-dead when he waltzed Michael Young back to third on a combacker, loading the bases with Ian Kinsler, a leading RBI man for the Rangers, coming to bat.

And on a first pitch fastball low in the zone, he was awarded a groundball double play to limit the damage.

In the second inning, the Rangers were awarded another gift when they put runners on first and second with one out on a double by Cliff Lee of all people, with the leading hits man, Elvis Andrus, coming to the plate. They did get a sacrifice fly, but again, could have been much worse.

And the inability to put the foot on the accelerator and separate cost them dearly, as the Giants proceeded to score eight unanswered runs, producing three clutch hits for every one that the Rangers failed to come up with.

And although they rallied to end up with seven runs, there has never been a more fitting place for the phrase 'too little too late".

What Happened to the Rangers Defense? 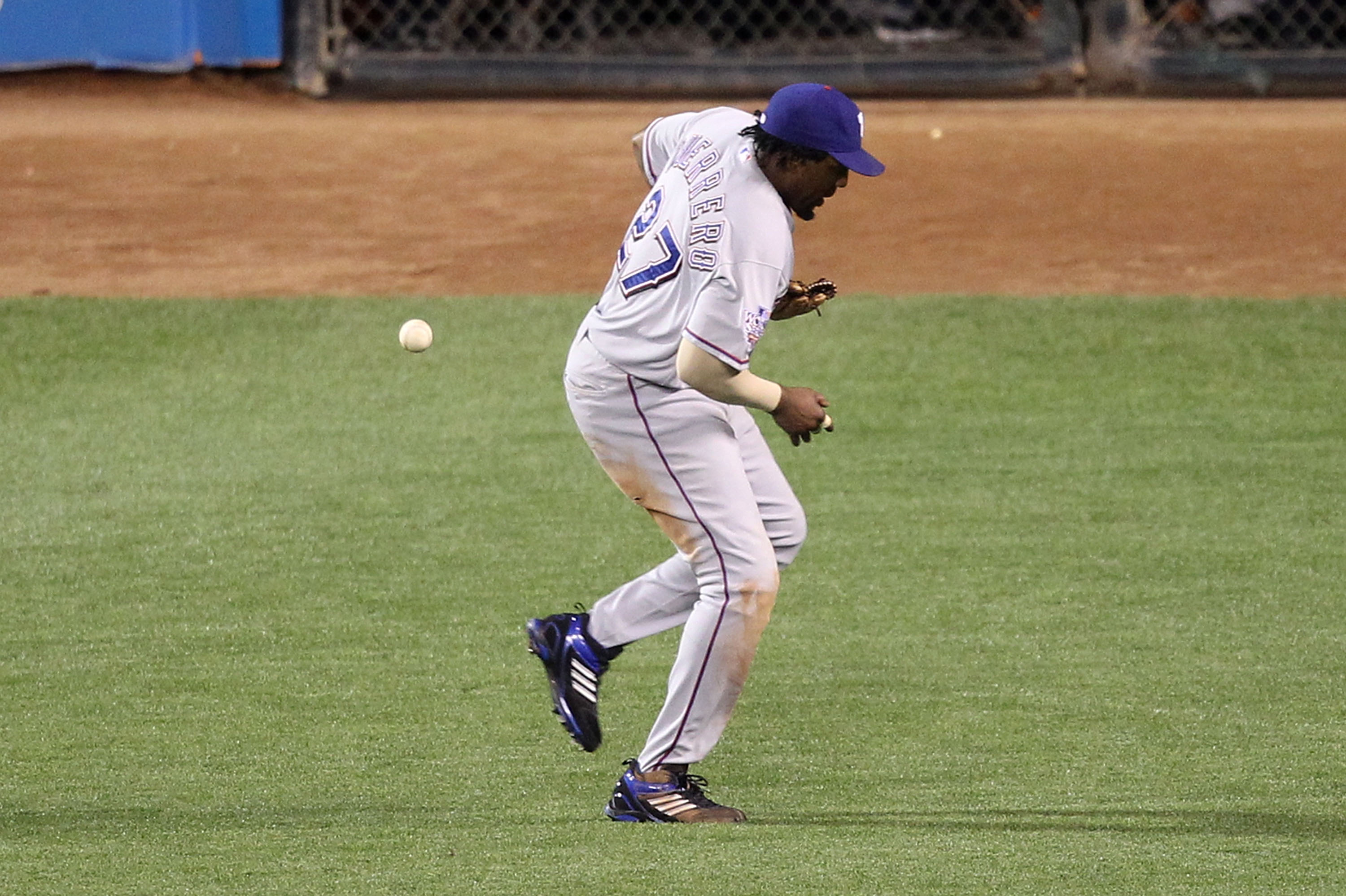 It is easy to bash Ron Washington for putting Vlad Guerrero in right field, as hindsight is always 20-20. In an attempt to keep his bat in the lineup, Washington asked Vlad to play the toughest outfield position in the league, right field at AT&T Park. He had to contend with triples alley, the bricks, the short porch down the line and the bullpen. And the result was two errors, resulting in two unearned runs. However, these runs were inconsequential, padding the lead after the winning run was already scored.

The real backbreaking error was committed in a seemingly inconsequential scenario by one of the defensive stalwarts of the Rangers, Michael Young. After cruising through two innings and building the 2-0 lead behind the ever studly Cliff Lee, Edgar Renteria was out in front on a two-seam fastball and hit a routine groundball slightly to the left of Young at third base. And he booted it, plain and simple.

After a failed bunt, Cliff Lee hit Andres Torres on a 1-2 count, and the Giants got a double and a single to tie the game.

Lee was never right from then on out. Two innings later the breakdown began, and the Giants built the 8-2 lead which was never challenged. Elvis Andrus even through in an error at the end of the fifth to allow the lineup to turn over for the run-scoring innings to come.

For such a celebrated defense, the Rangers looked like a nervous college squad in the field and must rediscover their strength with the gloves to help get themselves back in this series. 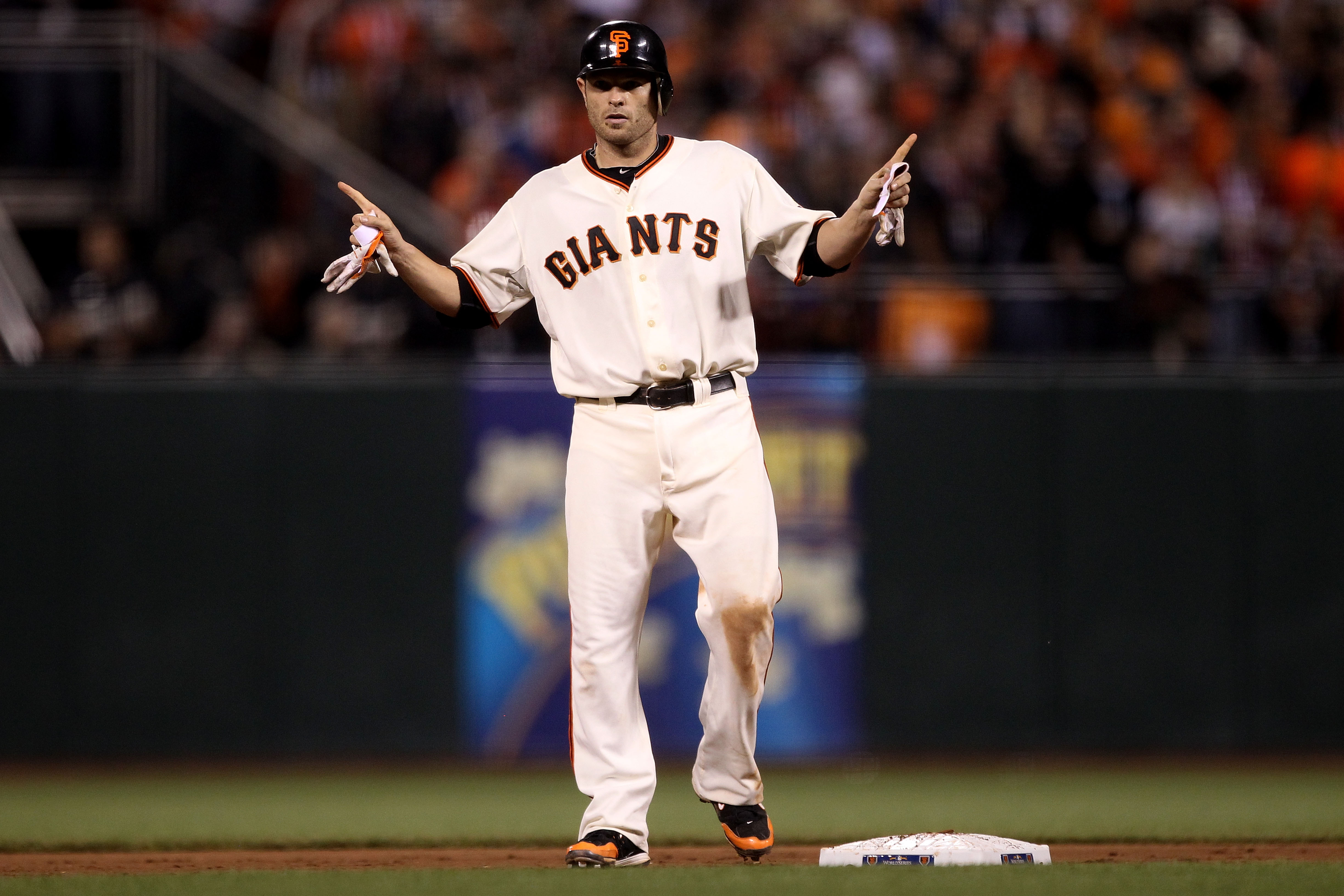 On a game that was supposed to be celebrated for its pitching brilliance, it was instead written into the record books as the second highest scoring Game 1 in World Series history. For all the dominance that Cliff Lee and Tim Lincecum displayed this offseason, it was all stripped away by the offense. Eighteen runs, 25 hits and six errors recorded in the box score and no complete games.

Cliff Lee couldn't locate his pitches, and Tim Lincecum couldn't strike the Rangers out. The only thing that really saved Timmy was his ability to lock down and get the big outs, something Lee could not accomplish and led to his departure in the fifth.

While both offenses flexed some muscle, the difference was exactly what it was on the mound, except in reverse. The Giants got all the big hits, the Rangers couldn't get one till it mattered no more.

The defense was poor, on both sides, but having extreme effect on the Rangers. Vlad looked lost, which did not hurt the Game 1 outcome but could have long term series effects.

And only one LCS MVP showed up—who happened to be the Giants' Cody Ross.

In all, Game 1 left us with more questions than answers and makes this World Series even more intriguing.