Projecting the San Francisco Giants' 25-Man Roster for the NLDS

For the first time in seven years, postseason baseball has found its way to AT&T Park. In the National League Divisional Series, the newly crowned NL West champion San Francisco Giants (92-70) will meet the Atlanta Braves (91-71), who also squeaked by on the final day of the season.  The winner of the five-game series will move on to face either Philadelphia (97-65) or Cincinnati (91-71).

No doubt Giants general manager Brian Sabean is spearheading an extended powwow with manager Bruce Bochy and his staff, as the rules call for the 40-man active roster to be trimmed down to 25 by Thursday's opener in China Basin.

Although substitutions can be made in each round of the playoffs, it will be interesting to find out the composition of the final list for the NLDS, as it will undoubtedly give clues on how they intend to attack the Braves and advance to their first National League Championship Series since 2002.

All year long, the Giants' outstanding pitching has defied belief, especially during the final month of the season. San Francisco hurlers held opposing batters to a .182 average in September and conceded three runs or less in 24 out of 26 games, a feat that has occurred only once since 1920.

However, the team's bats haven't fared as well, with their own dubious streak defining their offense. In the last 29 games to close the year, Giants hitters scored more than four runs only eight times. 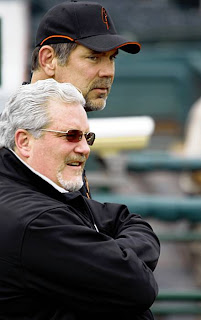 With that said, smallball will the be order of the day in San Francisco, and the signs were evident in last Sunday's division-clinching win over San Diego. In the bottom of the seventh inning, with the Giants in desperate need of adding an insurance run to a slim 2-0 lead, Eugenio Velez laid down a sacrifice bunt to move 245-pound Pablo Sandoval from first base.

However, the portly former All-Star's lack of speed was blatantly clear when he was gunned down at second with three strides to spare in what became a waste of an out.

The Giants' formidable rotation and bullpen have compensated for the toothless offense for most of 2010. Since this pattern will likely continue into the playoffs, the necessity of manufacturing runs will be at a premium in close games, where each win gets the team one step closer to the World Series.

According to the way Sabean and Bochy have handled the season to date, I have broken down the current 40-man roster and given my projections for the final 25 who will take the field for the NLDS. Starters are in bold, cuts will have lines through their names, and shaky picks up for debate will be in italics, with key stats for each player included.

THOUGHTS ON THE CATCHERS

What more can I say about Gerald D. Posey III except that the 23-year-old has been the driving force behind the franchise's resurgence this season. In my opinion, handling a pitching staff with poise, combined with excelling in the pressure-packed role of cleanup hitter makes him the front-runner for Rookie of the Year.

In the catastrophic event that Posey gets hurt, Whiteside will take his place. I was hoping Sabean would find a utility infielder in the offseason who could double as emergency backstop in order to avoid wasting a roster spot, but it was to no avail.

THOUGHTS ON THE INFIELD

Sabean deserves credit for putting this unit together. Huff has been hailed by many as Team MVP for embracing the job as power hitter, and the oft-injured Sanchez has teamed up with Fontenot to provide a very serviceable platoon at second base. With his production this year, Uribe has quietly made up for the deterioration in Sandoval's swing.

Speaking of the "Kung Fu Panda," I actually expect him to be a pleasant surprise this postseason. Renteria, another seasoned veteran with a ring, can start if necessary, but it seems that lately, Bochy has felt comfortable with Uribe and Sandoval taking up the left side of the infield.

At one point, Ishikawa might have had a shot on this roster due to his power potential and lefty bat, but his inability to come through in pinch-hitting situations won't help him survive the last round of cuts.

THOUGHTS ON THE OUTFIELD

Torres, the Willie Mac Award winner, has battled all year to solidify his status as starting centerfielder and leadoff man, with his 26 stolen bases a badly-needed commodity in the lineup.

Burrell has been a revelation in left field, providing surprisingly effective protection for Posey hitting in the fifth spot. Guillen is a mixed bag, but will start due to his offensive potential and veteran leadership.The addition of Ross from Florida through waivers came without fanfare, but he will be a jack-of-all-trades as a corner outfielder.

The fifth outfielder spot is a logjam, with three players offering three different skill sets. On one hand, Rowand has World Series experience. However, age and injuries have rendered him a step slower, which is painfully noticeable when he patrols center field now. And while he cracked a home run last Friday, it only gave him his second hit in his last 18 at-bats.

Most people will disagree with me, but I would like Eugenio Velez to take that last spot. He can make things happen on the basepaths with his feet even when his bat isn't functioning, but Bochy has allotted him only a sporadic amount of playing time.

Though it would be hard for Sabean and owner Bill Neukom to stomach benching a player making $7 million per year, Schierholtz brings a left-handed bat to the table, so I think he gets the nod over Rowand. But going 1-for-16 to end the year makes that trait relatively dubious.

THOUGHTS ON THE ROTATION

Contrary to the anemic 1-8 lineup, the Giants' rotation is strong enough to the point where they can get by with 12 total pitchers. Cain's struggles last Friday shouldn't overshadow the amazing year he's enjoyed picking up the slack when Lincecum went on a cold streak.

Speaking of "The Freak," he's back to his fireball-releasing self just in time. Sanchez, once the subject of trade bait from here to Toronto, has proven himself worthy of a postseason start, especially after putting up (and not shutting up) on Sunday.

Personally, I prefer the idea of having Bumgarner start and having Zito in support as long relief. It's no secret that the $126 million man hasn't lived up to his contract, with last Saturday's outing the latest in a long line of disappointments during his Giants career.

If Bumgarner were to struggle early, Bochy would have the luxury of calling on a veteran arm like Zito, who at the very worst could eat innings if they were in the midst of a blowout loss, since such a move would save the rest of the bullpen arms for the next game.

However, I think Bochy plays it conservative (as he always does), and puts the Game 4 ball in the former Cy Young Award winner's mitt. But whether or not that's the right move will remain to be seen.

THOUGHTS ON THE BULLPEN

As far as the bullpen is concerned, Bochy has quite the desirable dilemma, as he has five middle relievers with ERAs under 3.00 at his disposal who can serve as the bridge from the starters to Wilson.

Romo and Casilla lead the team in holds, and have become the skipper's bread and butter in the middle innings, so I think their spots are safe. I really don't like picking the inconsistent Affeldt with the variety of other options available, especially when Lopez and Runzler (returning from injury) are southpaws as well; both have been lights-out.

This time, I'll be optimistic and say he goes with Mota instead, who has been a clutch performer. Ray has been a decent pickup in exchange for Bengie Molina, but I feel he'll be the other odd-man out here.


THOUGHTS ON THE MINORS

Out of the seven designated players, only Joaquin has seen big league action this year, and with the depth in relief this year, he'll have to wait for 2011 to make his return to the majors.

So there you have it. Sabean and Bochy's roster decisions will affect the complexion of this series, and the fingerprints they leave on the final lineup will either be praised or reviled by Bay Area fans for years to come.

In essence, if it's going to take another seven years until the playoffs return to San Francisco, the Giants better make their moves count this October.