And now, ladies and gentleman, the Aflac $100,000 Question of the Day: Who is Dan Johnson?

Was he the dude from Miami Vice? Wait, that was Don Johnson.

Well, I think I went to middle school with a Dan Johnson, but he was really only notable for getting chicken pox like seven times. No one with an immune system that flawed could defeat the New York Yankees, so let's rule him out.

People tell me that Boston fans know Johnson very well; apparently he's done similar damage to the Nation. Unfortunately, Red Sox fans have been harder to find than Sisqo for the past two months.

Seriously now, who in the hell is this Dan Johnson — and why is he trying to destroy me?

As you can see, I'm not taking this well. Blowing winnable games with first place on the line can do that to a man. The Yankees were thisclose to a huge series win ... and they let it slip away.

I'm not even going to get angry with Phil Hughes. Other then two very bad pitches thrown to this Dan Johnson fellow, Easy Cheese pitched a very respectable game. Besides, it's become clear that Hughes' 2010 season is now more about steady progress as opposed to the breakout sensation potential he flashed back in the spring.

I can't exhibit the same restraint for the Yankee reserves who have received extended playing time with Nick Swisher and Brett Gardner out of the lineup with injuries.

Lance Berkman, Austin Kearns, and Colin Curtis put up a combined 5-for-28 (.179) with zero RBIs and runs scored in the three-game set.

Even worse, they seemed to come up every single time the Yankees needed a big hit. Needless to say, it didn't work out.

Berkman's double play to short circuit a bases loaded threat in the first was emblematic of the whole game. ESPN got a shot of Mark Teixeira's face as he turned back from home plate just in time to see Berkman get punched out at first.

If you could translate his expression, it would go something like this:

"Wow. I mean ... wow. I don't want to be a jerk about this, because Lance has had a great career, and he's the same guy who suggested that amazing barbecue place last time through Arlington. But this guy sucks. He really and truly sucks. Super hard." 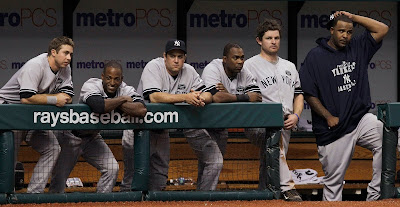 If letting Hideki Matsui and Johnny Damon walk as free agents were the two scoops, and signing Nick Johnson was the hot fudge, then acquiring Kearns and Berkman represents the whipped cream and cherry on top of Brian Cashman's hot sundae of sabotage this season.

The Yankees have lost eight of 10 games, but Joe Girardi said on Wednesday that his team could have easily won five of the games they dropped during this stretch. Of course, the glass-half-empty viewpoint is two late-inning home runs are all that separates the team from a 10-game losing streak and ESPN's Bristol, Conn. campus literally exploding from excitement.

Cowbells are still ringing in my ears. I think I need the off-day more than the Yankees.

- The real tragedy of the game is that Derek Jeter cheated, and the Yankees didn't even get a win to show for it. The captain needs to add that performance to his reel, alongside the time he wore a dress on a bad SNL sketch and the scene in Seinfeld where he rocked the mean Kid 'N' Play fade.

- The Yankees travel to Camden Yards next. You think Buck Showalter would like to extend his old team's misery? Am I insinuating that Buck Showalter is a bad guy? Yes. Yes I am.

- I really don't think I could hit any worse than Kearns or Berkman. I can get on a flight tomorrow and be in Baltimore by dinner. C'mon Cash, right the wrongs here.

- Tropicana Field still makes me want to die a little.

- Big home run, Curtis Granderson. I'm not going to say you've earned True Yankee™ status just yet, but you're really starting to grow on me.

Dan Hanzus writes the Yankees blog River & Sunset and can be reached via e-mail at dhanzus@gmail.com. Follow Dan on Twitter @danhanzus.

Yankees’ rotation already a concern; Jay Bruce a butcher at 1st base | 3 observations

Yankees’ rotation already a concern; Jay Bruce a butcher at 1st base | 3 observations