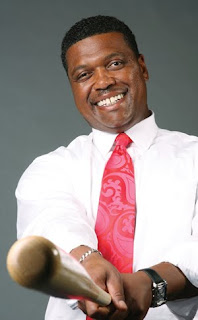 Many love him, many hate him, but Rod Allen is one of a kind. I think we can all agree on that. For a long time, I wasn’t the biggest fan in the world of the Tiger color commentator.

I always preferred the old FSN duo of Josh and Gibby over the team of Mario and Rod. But over time, I’ve come to appreciate Rod and what he adds to a game. He can be insightful, as well as entertaining.

Of course, at times he can just be goofy, too. I’m sure by now, you’ve encountered the “Rod Allen Drinking Game” somewhere. Check it out , if you haven’t.

But as a companion piece to that, I would like to attempt to put together a Rod Allen-to-English Dictionary.

Keep in mind, I understand that Rod isn’t the only one to use some of these phrases. But I’ve included everything that I could come up with that the man is fond of saying.

Let me know if I missed anything.

-A-Game: Any player that is playing well. “Ryan Perry brought his A-Game today.”

-Beauty: A nice pitch. “Ni threw a beauty of a curve to get the strikeout.”

-Big League: A non-routine play. “That was a big league catch by Everett.”

-Big ‘ol Contract: Rod likes to joke with Mario about how much money Mario supposedly makes. “You can buy us both dinner with that big ‘ol contract you have.”

-Cabby: Annoying nickname for Miguel Cabrera. “Cabby is capable of putting up MVP numbers every season.”

-Cheddar: A fastball over the plate. “Willis gave him a big piece of cheddar to hit.”

-Climb The Ladder: A high pitch. “I’d like to see Perry climb the ladder with a nice piece of cheese.”

-Country Strong: Any power hitter can be called “country strong”. It was most commonly used for Marcus Thames when he was a Tiger. “That boy is just country strong.”

-Crime: When something unbelievable happens. “Cabrera hit that ball so far, it should be a crime.”

-Crooked Numbers: Multiple runs scored in the same inning. “We need to put some crooked numbers on the board.”

-Easy Gas: A fastball that looks like it’s thrown with minimal effort, usually referring to Joel Zumaya. “Joel is throwing some easy gas at a hundred miles an hour out there.”

-Featuring: Whatever pitches a hurler is throwing. “Jeremy Bonderman is featuring a good fastball today.”

-Filthy: A pitch that is working. “Verlander’s curveball is just filthy.”

-From Time To Time: Common phrase for Rod. “Kelly struggles to hit the breaking pitch from time to time.”

-Fun To Watch: Rod’s usual compliment for any retired player. “Cal Ripken was sure fun to watch.”

-I See Ya: Shouted when Rod is excited, usually after a home run. “I see ya, Big Fella!”

-Johnny On The Spot: A player that’s in the right place at the right time. “Sizemore was Johnny on the spot on that play.”

-King Felix: Felix Hernandez’s nickname and the only way I’ve ever heard Rod refer to him. “We gotta face King Felix next week in Seattle.”

-Mr. T Starter Kit: What Rod calls any excessive jewelry on a player. “Sheffield has his Mr. T starter kit on display today.”

-Not A Bad Idea: What Rod says any time someone tries to bunt. “Laird bunts it foul…not a bad idea in this situation.”

-Not Fair: Used to describe when a pitcher is dominating. “The way Greinke is throwing out there today is just not fair.”

-Oh No He Didn’t: A common saying used whenever someone on the Tigers makes a big play. Mario: “Diving catch by Inge!” Rod: “Oh no he didn’t!”

-Piece: Rod almost always says “change piece” or “slide piece” instead of changeup or slider. “Bonderman’s been looking to add a change piece for a couple of years now.”

-Professional Hitter: A hitter that makes a lot of contact, used commonly for Placido Polanco in the past. “Derek Jeter is just a professional hitter up there.”

-Rally The Troops: Referring to someone, usually Jim Leyland, giving a speech to fire up the team. “It’s still early and Jim’s trying to rally the troops even through they’re down 5-0.”

-Rib Eye: RBI. “Magglio is looking to get a couple of rib eyes right here.”

-Seed: Any hardly hit or thrown ball. “Santiago threw a seed to home plate to nail him.”

-Skipper: The manager of any team. “The skipper’s got his work cut out for him.”

-Some Kinda Smooth: A compliment. “Austin Jackson is some kinda smooth out there.”

-Special: Rod is always referring to any players with above average ability as “special.” “Jose Valverde is a special kind of player.”

-Steady Diet: When a pitcher keeps throwing the same pitch to a hitter. “Brandon Inge has seen a steady diet of breaking pitches from Lester today.”

-Unhittable: Any pitch that a batter swings and misses. “That fastball by Verlander was unhittable.”

Love ya, Rod. You’re a special kind of announcer.

Red Sox Players for Whom Spring Training Is Most Important

Red Sox Players for Whom Spring Training Is Most Important