Football's future stars are arriving in Indianapolis for arguably the biggest audition of their careers.

Officially, it's called the NFL Scouting Combine, and it's a chance for all invited draft prospects to improve their stock through physical testing, on-field workouts and interviews with prospective employers.

While our draft board could look a lot different by this time next week, let's run through our latest mock first round and spotlight three prospects who could become the talk of the combine. 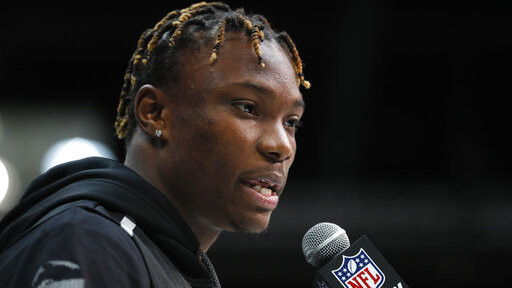 Offensive line is one of the sport's least glamorous positions, and the lack of spotlight time drives that point home. But this is one of the exceptions where an offensive lineman can be the talk of the town, provided they show a rapid burst or Herculean strength.

Tristan Wirfs can provide the latter. He was a state champion in both track and wrestling, and he's the kind of elite athlete who can make incredibly difficult feats look easy.

"Wirfs' weight-room prowess was legendary at Iowa," Scott Dochterman wrote for The Athletic. "He shattered the program record in the hang clean with a 500-pound maximum lift and he put up 450 pounds four times to better Brandon Scherff's record in both categories. Additionally, Wirfs has performed backflips into swimming pools and can walk on his hands."

Wirfs is a natural athlete who just so happens to pack 322 pounds on his 6'5" frame. When scouts give him a look up close, they could become infatuated.

Isaiah Simmons is such a gifted athlete that he has us wondering how he slipped outside of our mock top 10. He has a best-case scenario combine where he exits Indy as a top-five lock.

"Simmons is a sky-walker," Bruce Feldman wrote for The Athletic. "He vertical jumps 40 inches and broad jumps 11-0. He routinely jumps on to a 52-inch box for single-response jump work. He also has run a sub-4.4 40 this off-season."

Those are impressive numbers, right? Here's when they reach ridiculous status: Simmons is a 6'4", 230-pounder. He is equally capable as a cornerback and safety as he is a linebacker.

That versatility has never been more valuable, and it speaks to Simmons' wealth of physical tools. He could make our mock projection look comically low.

For all the different test types at the Combine, nothing captures the football world's attention quite like the 40-yard dash. Whenever someone blazes through the test, fans and front offices alike can't help but imagine how that burner might fare in their offense.

Henry Ruggs III is this draft's designated burner. He's not competing against peers as much as he is the standard-setters at past events.

"[Ruggs] looked like an Olympian in the hyper-fast SEC during his time at Alabama, as he scored 24 times on 100 career touches for the Crimson Tide," CBS Sports' Chris Trapasso said. "Like most blazing fast human beings, Ruggs has an electric get off, quickly shifts into second gear, and his afterburners leave everyone else in the dust."

Cincinnati Bengals speedster John Ross holds the Combine record at 4.22 seconds. There's a non-zero chance Ruggs slips in below that number, and if that's the case, there's zero chance he gets all the way to the 19th pick.