Jacksonville Jaguars cornerback Jalen Ramsey saw his desire to be traded go public Monday, and on Tuesday he addressed the matter with the media:

As for why he made the trade request, he made it clear that winning is his first and only priority.

"All I care about is winning man, s--t," Ramsey added. "Everybody knows that. I want to f--king win."

Mulugheta confirmed to Schefter that his client would like to be traded.

According to Tom Pelissero of NFL Network, Ramsey has grown frustrated by how he is being used in Jacksonville, as he is not a fan of playing zone defense:

The #Jaguars want a lot in any potential trade for CB Jalen Ramsey, who is going to command a massive contract extension soon and says he’s focused on balling out Thursday night against the #Titans — if he’s there. @nflnetwork https://t.co/Fk0rCYbTgV

Ramsey previously told ESPN's Michael DiRocco (via ABC News) in November 2018 that he wanted to spend his entire career in Jacksonville. However, as the team has declined to extend him with just two years remaining on his rookie contract, his future there had come into question.

Even with the latest twist, he says he will continue to be a professional.

Jalen Ramsey says he doesn’t hold any grudges against the Jaguars—“s--t happens”—and is excited to play Thursday night “if I’m still here” 😅 https://t.co/65LvvQhgUz

"I have nothing bad or negative to say at all about anybody in this building," Ramsey added. "... I don't really too much want to speak on it or give too much detail. I'mma let God do his work. I'mma let my agent do his work."

Ramsey also left no doubt as to his place in the NFL's cornerback hierarchy:

Jalen Ramsey says there “ain’t no argument” about who is the best CB in the NFL. https://t.co/zdsF6BawsU

Jacksonville does not have ample time to get a deal done prior to Week 3, as it will host the Tennessee Titans on Thursday night. However, Schefter noted one league source is not ruling out the possibility that a trade happens this week:

One league source said he believes Jaguars’ CB Jalen Ramsey could be traded this week, that once there is a sideline confrontation between a head coach and a player, both sides have to move on.

Schefter also reported the Jaguars are seeking "at least one first-round pick." According to ESPN's Dianna Russini, Jacksonville has already been offered multiple packages that feature a first-round pick:

There should be no shortage of interest in a defensive back of his caliber as teams continue to air the ball out. After all, he is a two-time Pro Bowler and was named a first-team All-Pro in 2017—and he is just 24 years old.

The latest episode of Stick to Football is live, discussing Ramsey on the trade block and more in the NFL and college football!

Josh Dobbs Was at NASA/SpaceX Launch as NASA Intern 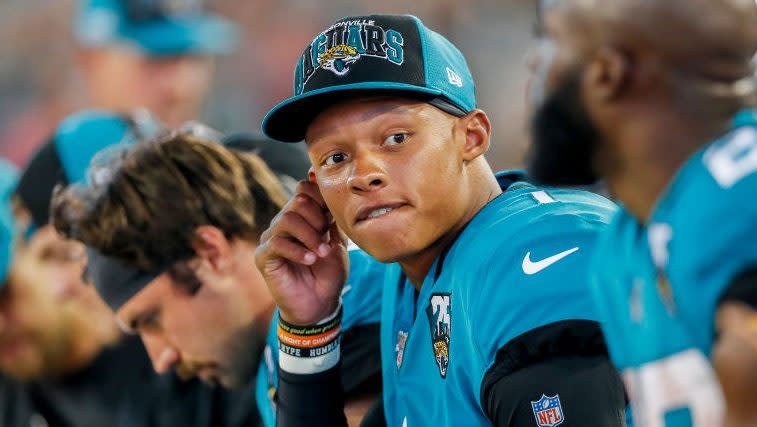 Josh Dobbs Was at NASA/SpaceX Launch as NASA Intern