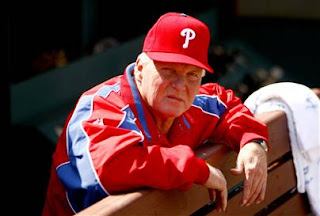 Manuel came to that decision after using four of his starters in the first two games of the series.

Cliff Lee went all nine innings in the opener, then after Cole Hamels only got through five innings, Manuel went with Joe Blanton and JA Happ, both of whom had been possibilities to start game three.

Now the Phillies are forced to go with Martinez, who has struggled with soreness in his neck and has consistently had arm problems, in a game that is supposed to involve snow and 25 degree weather.

Manuel said that Martinez is expected to throw in the range of 85-100 pitches before his night is over.

With Martinez on the mound it may seem like a tough match up, but the fact of the matter is, Martinez is simply a shell of the pitcher that he once was.

He has dealt with injuries for the past four years and was unsigned until early August, when the Phillies took a chance on him. He was great in his first few starts, but after a 130-pitch outing, he has struggled to get his groove back.

While Manuel threw Blanton and Happ in game two, Blanton threw only 18 pitches, and Happ just four before being hit in the knee by a Seth Smith line drive.

So the strategy for Manuel is easy to figure out. Knowing that the aging Martinez takes longer to warm up, even when the weather is warm, it does not suit him well to come out of the bullpen.

What that means for the Rockies is that they need to jump on Martinez early and get the lead. If they can drive Martinez’s pitch count up, they will get him out of the game early. If Blanton comes in with the Rockies leading the game, it makes it impossible for his pitching to change the game.

If, however, the Rockies fail to get to Martinez, they could be faced with a bad situation. Instead of getting deep into the bullpen, Colorado could easily see three innings of Martinez followed by six innings of Blanton, leaving them in another situation where they do not get to take their hacks against a very poor Phillies bullpen.

Game three is going to go a long way in determining who will win this series. It is of utmost importance for the Rockies to jump out in front and play with the lead, something that they have done very well in 2009. If they are unable to get the early lead, it may be a long, cold night.