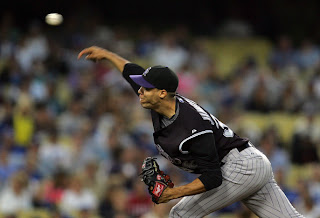 The Colorado Rockies opened their postseason in Philadelphia, the same place that they did in 2007. Both teams are essentially full of the same players. Except for one.

At the trade deadline the Phillies acquired Cliff Lee from the Cleveland Indians. Lee won 22 games in 2008 en route to winning the American League Cy Young award. Lee and the Phillies won game one of the best-of-five series 5-1.

Lee showed the Rockies why he won the coveted award in Game One. With the wind blowing nearly 30 mph, Lee kept the Rockies off balance. He mixed in sliders on the outside corner to go with hard fastballs that kept the Rockies guessing all afternoon.

Then, the fifth inning came and the Phillies finally got to Jimenez.

Jayson Werth led off the fifth inning with a walk. Jimenez then got down 3-1 in the count to Raul Ibanez. Ibanez then ripped a change up down the right field line, scoring Werth all the way from first on the double. Pedro Feliz then singled to right field, moving Ibanez to third base. Jimenez gave up another hit to Carlos Ruiz. Right fielder Brad Hawpe get caught in-between on a hop. He was trying to catch the ball, but when he realized that he could not catch it, he pulled up, only to see the ball skip past him. With Ruiz at second base after the error, Jimenez worked a ground ball back to him. He turned and fired to second base and was able to get Ruiz into a rundown. That helped Jimenez get out of the inning with only two runs.

The next inning was more of the same as Jimenez gave up three runs.

With Cliff Lee on the mound for the Phillies a five-run lead may as well have been a 50-run lead. The Rockies kept firing early in the count, allowing Lee’s pitch count to remain low. The Rockies finally scored a run off of the lefty after 8-2/3 innings, spoiling Lee’s chance at a complete game shutout in his first ever postseason appearance.

While some Rockies fans may want to panic, and others may want to know why the Rockies did not trade off half of their farm system for Lee in July, it is too early to declare this team dead in the water.

The reality of baseball is that a team needs to win at home and split on the road. If the Rockies win on Thursday afternoon the momentum swings back in their favor before heading back to Coors Field.

Cole Hamels is on the mound for the Phillies in Game Two on Thursday. He was the NLCS MVP and World Series MVP in 2008, but has been a shell of the pitcher that he was in ‘08. He dealt with an early elbow injury and has only been good enough to go 10-11 on the season. He is still a tough lefty to hit, but the Rockies lineup will be hard pressed to be dominated two days in a row.

If the Rockies can go out early and get a couple of runs it should be enough to make a shaky Hamels feel like he does not have his best stuff. If they can get the early lead it will go very far for the club.

The Phillies achilles heel is their bullpen. If the Rockies can get into the Phillies bullpen early they will be in good shape.