There were a number of things the Cleveland Browns needed this year in order to make a significant leap forward: an improved run defense, a true, franchise quarterback and playmakers on offense. The first two are still works-in-progress, but the latter seems to be taken care of, based on receiver and returner Travis Benjamin's performance in the first two weeks of the season.

In Week 1 against the New York Jets, Benjamin caught all three passes thrown his way for 89 yards and a touchdown and also totaled 10 punt return yards. He did even better in Week 2's 28-14 defeat of the Tennessee Titans, with Benjamin catching three of four pass targets for 115 yards and two touchdowns and returning six punts for 154 yards, which included a 78-yard score.

All told, Benjamin totaled 269 all-purpose yards, most of which came on big plays. In addition to the long punt return score, he also had 50-yard and 60-yard touchdown grabs. Benjamin has been the dictionary definition of an explosive player in this young season.

Benjamin's Sunday performance brings his total receiving yards to 204 on the year and his all-purpose yards to 368. He's on pace to shatter all personal bests from his previous three seasons with the Browns and on pace to be the team's 2015 MVP.

It was never guaranteed that Benjamin would have this kind of start to his season. In fact, based upon his 2014 production, he initially looked to be on the Browns' roster bubble to start the spring. But now that Benjamin is further removed from his season-ending 2013 knee injury—one that he admitted on Sunday led to hesitation in his game in 2014—he is able to show his true potential.

#Browns WR Travis Benjamin said last year he was hesitant coming off ACL. This year he's back to full strength.

While everyone has been looking to rookie Duke Johnson or receivers Dwayne Bowe and Brian Hartline to emerge as the Browns' offensive heavy-hitters, Benjamin has instead taken on the playmaker mantle. It's the "greatness" that Benjamin said Sunday he's "always envisioned."

Sunday's performance led Browns head coach Mike Pettine to dub Benjamin "the Titan killer," but a few more games like this and he'll be a killer to opposing defenses and special teams coverage units, full stop.

That's good news for the Browns, given that Bowe has yet to make an impact after spending the past month-plus battling through a hamstring injury and Hartline all but disappearing despite seeming like the team's go-to receiver during the summer. Benjamin has managed to step up in a big way at exactly the right time.

Though it's not wise to expect this kind of showing from Benjamin on an every-week basis, it's also important to note that days like Sunday are quickly becoming the rule for him, not the exception. With his speed, his rebuilt confidence and clear trust from Cleveland's coaching staff, Benjamin has earned his bigger role and is rewarding his coaches and teammates for the opportunity.

Benjamin may not be the playmaker the Browns expected, but he's most certainly the one they need. If he keeps this up, the Browns will be a far more competitive team on a weekly basis than it appeared before the season opened. 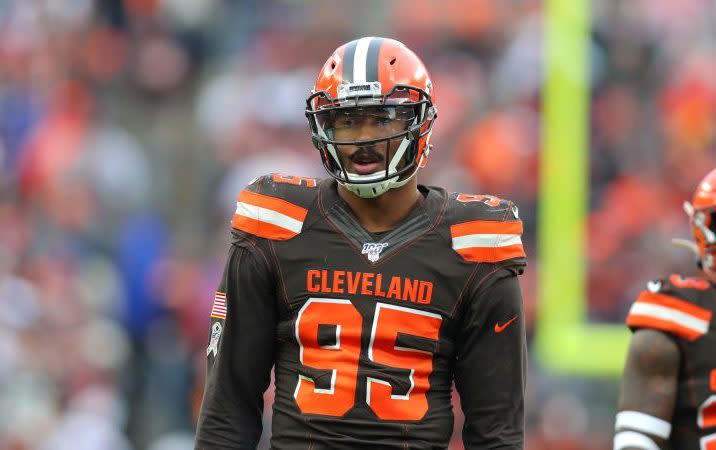