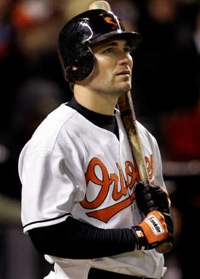 From May until July, Luke Scott was one of the biggest surprises in baseball. Scott was tearing the cover off the ball and many wondered if the slugger was finally developing into the player that so many thought he would become. By the all star break, Scott had put together stats worthy of praise: .305 batting average, 18 home runs, 51 RBIs, and a robust .384 OBP.

"1. His value has never been higher

-Outside of a brief stretch in 2006, Scott has never been this good of a player. If McPhail wants to maximize return on Scott, now is the time to do it.

-Even though Scott is playing well right now, he is likely not the Orioles future plans. Scott is almost 31-years-old, which is not old, but probably too old for Scott to be considered a building block for the future. Moving him now would bring back some potential building blocks."

To me, it made all the sense int he world for Orioles to continue the rebuilding process and move Scott if the opportunity presented itself. Scott had just put together two of the best months of his life and with the Orioles going nowhere, now was the time to pounce.

But as we all know by now, the Orioles decided to hold onto Luke Scott. And not surprisingly, Scott's numbers have taken a drastic nosedive down to his 2007-2008 levels where he probably belongs. Scott is a .250+ hitter with the ability to hit 20+ home runs and drive in some runs. He's once again proven that he's nothing more than this.

What I can't totally wrap my finger around is why there was so little trade chatter about Luke Scott during the deadline. Am I the only one who thought this was a good idea? So in my best efforts to figure out McPhail's thinking, I have come up with a few options why Scott was never moved:

1. Orioles wanted to hold onto Scott long term and never looked to move him

2. Orioles did not get the package they were looking for

3. As commenter Christopher Collichio put it back in May: "Teams aren't stupid, they know what Luke Scott is capable of, and can see through the fact that he is just on a hot streak at the moment."

And maybe, just maybe, that's the answer right there. No team was willing to pay a high price for Scott because no one thought that he was capable of sustaining those numbers. And on the other side, the Orioles weren't just going to give Scott away because he was their best hitter for more than a month and was showing some potential.

In the end, who knows what happened. All I know is that if I was Andy McPhail, I would have been pushing to move Luke Scott in June/July for the sole purpose of maximizing the possible return.

Did McPhail make the right choice by not moving Scott? Only time will tell.