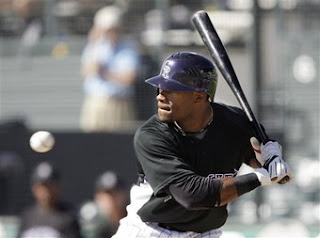 After being swept in San Francisco, giving away their four game wild card lead, the Rockies have fought back and won the games they needed to win.

After Thursday's 5-1 win over the Reds, the Rockies completed a 9-1 home stand in which they gained 4-1/2 games over the Giants in the Wild Card race.

The strength of this team is their depth, which was on full display during the four game set against the Reds.

With starters Troy Tulowitzki and Ian Stewart down with back strains, the backups have filled in quite nicely. Eric Young Jr. stepped in to play second base as Clint Barmes slid over to play shortstop.

After the loss of Aaron Cook to injury Rockies general manager Dan O'Dowd went out and got Jose Contreras from the White Sox.

After a great outing on Saturday vs. the Diamondbacks, Contreras flailed in his three innings of work on Thursday before exiting after tweaking a quad muscle running to first base in the bottom of the third inning.

Instead of panicking and watching the bullpen blow up after having to enter the game in the fourth inning, the Rockies methodically marched Jhoulys Chacin to the mound for one inning, then Juan Rincon for three innings and finished with Matt Belisle.

Both Rincon and Belisle have struggled for the Rockies in '09, but were nearly flawless in their effort on Thursday, combining to give up just three hits and striking out seven in their five innings of work.

The Rockies are winning games due to their depth, even if that is not necessarily showing up in the box score.

On Wednesday night ,fifth starter Jason Hammel pitched into the eighth inning. He was nearly flawless on a night when the Rockies were struggling to get the bats going against Reds starter Bronson Arroyo.

Hammel had a one-hitter through seven innings. He gave up back-to-back doubles in the eighth, allowing the Reds to tie the score before he was removed.

Hammel's name does not appear in the win column for the game on Wednesday night, but if there was a single reason the Rockies were in the position that they were in, it was due to Hammel, who has struggled at Coors Field.

Another example of the Rockies depth is in their bullpen.

Huston Street went down last week with biceps tendinitis. For most teams to lose their closer would be a sign of a team falling apart.

Instead, this Rockies team simply inserted Franklin Morales into the closer's role and watched him save games. Morales did not miss a beat, all five saves came in tight situations where the Rockies had very little breathing room.

Perhaps the greatest example of the Rockies depth has been the addition of Jason Giambi.

While Giambi himself has made considerable contributions to the Rockies, his biggest impact has simply been his presence.

With Giambi on the bench, manager Jim Tracy can feel comfortable putting Seth Smith in the starting lineup.

Before Giambi's arrival, Smith was the best option that the Rockies had off of the bench in the late innings. If he was in the starting lineup, Tracy lost the opportunity to insert him when he was needed most.

With Smith in the lineup every day, he has gone on a tear, winning the National League Player of the Week award. In September, Smith has hit .447 going 17-for-38.

In those games, he has homered four times, hit six doubles and driven in 14 runs, including the tying and winning runs on Wednesday night in the ninth inning.

While they are just now getting some national exposure, this Rockies team is showing that they do not have a true weakness. Their starting rotation is solid, their bullpen is very good and their lineup matches up well with any other teams.

With the Giants playing the Dodgers this weekend, the Rockies are guaranteed a chance to gain ground in one of their races.