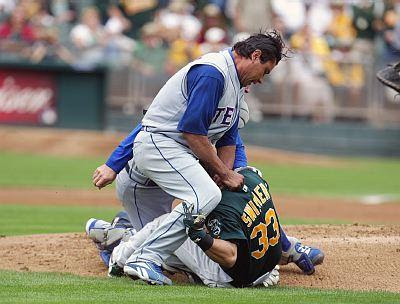 TO OINK
ABOUT
It appears a blood culture is going to send Vicente Padilla wheezing his way into baseball infamy.

The Texas Ranger right-hander is not going down for steroids. Rather, he’s the first Major Leaguer diagnosed with the H1N1 virus—AKA the dreaded “Swine Flu.”

The 31-year old won’t be the last ball player to contract the infection that’s affected close to 400 people worldwide. After all, locker rooms are breeding grounds for all sorts of fungus, fuzz, and algae.

Case in point, the influences of influenza led to the postponement of a Pacific Coast League game Friday night in Utah between the Portland Beavers and Salt Lake Bees.

We won’t have to wait until pigs fly before another big leaguer takes ill of swine flu.

So, how exactly did Padilla attract the nasty, pig-dubbed bugs?

Even if he traveled to his hometown of Chinandega over the All-Star break—a 4.67 ERA rarely gets you the fans' nod—the likelihood of him contracting the virus was as slim as a bearded pig, a swine traditionally known for its svelte figure. Only 26 cases were reported in Nicaragua through early June.

Operating on the assumption that Vicente didn’t hop a Padilla Flotilla out of the country, let’s retrace some of his steps using baseball lineage and history to find out where he may have acquired the virus that’s left him not quite feeling like a pig in…well, you know.
Consider this swine search a Six-Degrees of Kevin Bacon, if you would.
Here we go:

Of course, Scranton/Wilkes Barre is no longer home to the Red Barons, nor are they even linked to the Philadelphia. Phillies farm hands one step away from the show now play their home games in Allentown, Pa., as members of the Lehigh Valley IronPigs. We have our first swine link.

The IronPigs (2nd) are the Triple-A farm team of the aforementioned Phillies (3rd); a ball club raised in a city largely designed by famed architect and native son Edmund Bacon.

In a cosmic twist, Edmund not only sired much of the city’s modern-day infrastructure, but also actor Kevin Bacon.

That sensation rippling down your neck to your arms right now aren’t goose bumps; they’re hog pumps. In football, they call that ‘pig skin.’

We’re already pretty far from where we started, but there’s no ignoring the swine theme. Just wait.

Edmund Bacon (4th) is the namesake of Eddie Bacon. Irony or coincidence isn’t lost on Eddie, a native of Frankfort, Kent.

Eddie is the only player in Major League Baseball history with the last name of Bacon. That’s a relatively low ratio considering there are 26 (the same number as Nicaraguan swine flu cases) Eddie Bacons on Facebook alone.

Bacon (5th) took the mound once as a member of, none other than, the Philadelphia Athletics. On Aug. 13, 1917, he gave up 7 walks and struck out none in six innings of work.

If Bacon is still alive today, he’s 114 years old and probably not hiding out in Bacone, Okla., or sending a grandson to Colchester, Conn.’s, Bacon Academy.

The chances are even better that Bacon hasn’t recently hung out, hacking and wheezing, with the Texas Rangers’ pitching staff and doled out cases of swine flu.

But it does bring us back to Padilla. And although we haven’t successfully proven a link between the pitcher and swine flu, we have traced a time line of sickly pitching.
Padilla’s and Bacon’s careers intersect at the nexus of mediocrity—proof that marginal pitching discriminates against no era.
And that’s something to oink about.

Not your father’s Phillies: Giants 11, Phillies 2

Not your father’s Phillies: Giants 11, Phillies 2

Thoughts on a 4-2 Rangers loss

Thoughts on a 4-2 Rangers loss