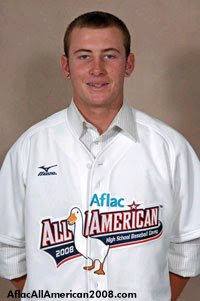 The Colorado Rockies diverted from their typical ways of using their first round picks on college pitchers and selected a left-handed high school pitcher from Orange County California.

With the 11th overall pick in this year's draft, the Rockies picked Tyler Matzek, a 6'3", 210 lbs. high school pitcher. Matzek led his Capistrano Valley High School team to a C.I.F. Championship, going 3-0 with a 0.00 ERA in the playoffs.

Matzek is an 18-year-old who some thought would go as high as second overall in the draft, but fell all the way to 11th, where the Rockies scooped him up.

Some believe that there may be an issue signing Matzek, as he is committed to the University of Oregon and is said to have been asking for quite a bit of money to break that commitment. It should be interesting to see how the Rockies approach negotiations with the 18-year-old.

Matzek has hit 98 MPH with his fastball, and was considered by some as the best high school pitcher available in the draft.

Many thought that the Rockies would select Matt Hobgood, another Southern California high school pitcher, but he ended up going fifth overall to the Baltimore Orioles.

Here is a look at the Rockies history of Rockies' number one picks: