Kobe Bryant has proven that his career isn't over just yet.

Nearly grabbing a scoring title against the now three-time scoring champion Kevin Durant was an impressive feat for the 33-year-old future Hall of Famer.

Although he has probably at least a couple years until he retires, Bryant has already been rightfully placed in the conversation with all-time greats.

But where does he fit in with the likes of Michael Jordan, Larry Bird, and Magic Johnson?

First of all, let's dispel the myth that he can even be compared to Michael Jordan. According to NBA.com, Magic Johnson said it himself, "There's Michael Jordan, and then there is the rest of us."

Per the same story, Larry Bird remarked after a playoff game that he had played against "God disguised as Michael Jordan."

These guys are top-10 players of all time, and here they are, saying that Jordan is on a different level than they were.

Bryant averages fewer points per game than Jordan and also has fewer MVPs, NBA championships, scoring titles and just about everything else.

Put simply, there is no comparison between 23 and 24.

Now, where does Kobe fit in among all-time Laker greats?

Magic Johnson was a five-time champion and is generally regarded as the greatest point guard of all time.

At 6'9", Magic was one of the most well-rounded talents the NBA has ever seen. He averaged 19.5 points per game, 11.2 assists per game, and an astounding 7.2 rebounds per game.

The former Laker point guard also has more MVPs (3) and finals MVPs (3) than does Kobe.

Many may regard Kobe as a clutch performer, but this ESPN ranking gives the best playoff performance to Magic Johnson. (And Kobe isn't even in the top 10.)

In Game 6 of the NBA Finals, Kareem Abdul-Jabbar wasn't able to play due to injury, so Magic Johnson—a point guard, mind you—played center.

His 42 points, 15 rebounds, seven assists and three steals led the way for the Lakers to beat the 76ers and legend Julius Erving.

And that was in his rookie year.

There are two more Laker legends ahead of Kobe: Shaquille O'Neal and Kareem Abdul-Jabbar.

Shaq was the most dominant player of his generation. In the Lakers three-peat from 00-02, "The Diesel" won every single finals MVP award and even reigned in a regular-season MVP award in 2000.

Kareem Abdul-Jabbar is another big man who simply dominated the game, to the tune of six NBA championship titles, six MVP awards, 19 times an All-Star and of course the NBA's all-time scoring titles. 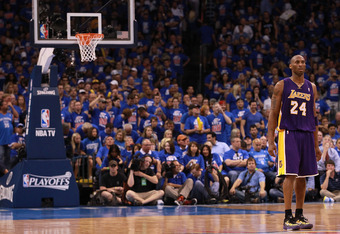 There isn't much of an argument for Kobe against the legendary career of Kareem.

That makes Kobe the fourth-best player to play in Hollywood, and therefore not a top-five player in NBA history.

Considering the staggering achievements of Wilt Chamberlain, Larry Bird and Bill Russell, Kobe drops down at least a couple more spots. He and Tim Duncan are at similar spots among the NBA's greatest.

But top five? Definitely not.

Read more of my basketball writing, including a Kobe-LeBron comparison on Bases and Baskets.com.