It was a result almost no one predicted. In their first two games, Greece had just come up short, putting together strong second halves but falling behind by too much in the first half. Everyone expected the same, or even worse, against the Russians this past Saturday.

But against all expectations, and very much against the run of play, Greece grabbed a 1-0 lead at the end of halftime and held onto that lead throughout the second half of the game despite massive pressure from the Russians.

In doing so, they jumped from fourth in the group to second and qualified for the knockout stages of the tournament.

But more importantly, Greece's victory gave the people of Greece something to celebrate at a time in which there has been little joy for the country of Greece.

As Greeks head to the polls this Sunday for the second time in two months to vote on a new government, the economic future of their country remains very bleak.

No matter which party wins—be it the center-right New Democracy party or the leftist Sryiza party—more austerity cuts are likely to be on the way, and the possibility of Greece's withdrawal from the European Union still remains very much on the horizon.

Economic recovery is still months—if not a couple of years—away for Greece. Unemployment and poverty levels only continue to increase in the meantime.

It's not a good time to be a Greek.

Courtesy of the Jubilee Debt Campaign

But, sometimes, football can be the perfect distraction from such grief. Being an Egyptian, I've learned this lesson all too well.

The anguish and passion that Giorgios Karagounis showed when he was denied the penalty that likely would've put his team up 2-0—and was instead booked and made to miss his team's quarterfinal match—is something every Greek can admire.

The strength of the Greek defense—especially Sokratis Papastathopoulos and Avram Papadopoulos in the center—to withstand attack after attack from the Russians and repel them time and again—that's strength that every Greek will look to duplicate in their own personal lives.

And the persistence of Georgios Samaras, to continue making key, dangerous runs into the Russians' half despite having little support and having the ref rule incorrectly in Russia's favor multiple times—that endurance and will to overcome is something every Greek will look to harness for themselves. 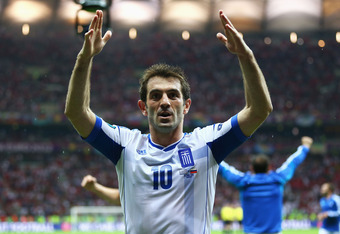 Ultimately, football is not the answer. Football and politics are separate and should always remain so. Greece's economy is under serious pressure, and football can do nothing directly to alleviate that pressure.

But that doesn't mean it can't help out indirectly by providing motivation and energy to a population that has been often made to feel helpless in the last year or so.

In the end, Greece will likely exit the tournament in the quarterfinals, especially since they'll be without captain Karagounis.

The determination and endurance of the team, however, will not soon be forgotten by the country's beleaguered population and will resonate with it for many months to come.

Klopp: Atleti Wanted to Get Mane Sent Off

Klopp: Atleti Wanted to Get Mane Sent Off