Strasburg was unhittable at times on Thursday.Jonathan Daniel/Getty Images

The Washington Nationals fought until the final out, in order to come out victorious against the Chicago Cubs on Opening Day. At times it seemed impossible for the Nationals to score, but they came up big in the late innings when it mattered the most.

Stephen Strasburg manipulated the Chicago Cubs over seven innings, but left the game trailing by one run. On most days, Strasburg would have had a lead after the two long drives that Ryan Zimmerman hit in this game.

The winds were whipping at Wrigley Field and very well could have cost the Nationals an Opening Day victory.

Zimmerman made superb contact twice in this game for what looked like two long home runs. Instead they settled into the outfielders' gloves and resulted in no runs for the Nats.

Ian Desmond would not allow Washington to fall on Opening Day however. In the 8th inning, Desmond began the Nationals rally by getting a one-out single. The Cubs elected to replace Ryan Dempster with Kerry Wood to get the final out in the 8th.

Desmond went on to steal second base, and Zimmerman drew a walk. Wood tried to paint the corners with the batters he faced but could not. He would walk three in a row, the last forced in Desmond to tie the game at 1-1.

The Nats would rally again in the 9th with two outs. A Chad Tracy double would set up Desmond to step up big again. He delivered by punching a single to right field and giving the Nats a 2-1 lead going into the bottom of the ninth.

Brad Lidge was called on to attempt the save but flirted with disaster. After a strikeout of Reed Johnson, Lidge gave up a long fly ball to right that would have been a home run on any other day. Jayson Werth had a difficult time fielding the ball and it dropped in for a triple.

Desmond was clutch for the Nationals on Opening Day.Greg Fiume/Getty Images

The following batter, Jeff Baker, hit a ball sharply to Zimmerman at third who threw out Stewart trying to score at home.

Lidge went to a full count on Marlon Byrd before putting him a away with a ball on the corner of the plate that caught Byrd staring at strike three.

Lidge closed the door in an exciting, dramatic Opening Day for the Nationals.

Strasburg finished the game throwing 82 pitches in seven innings, while striking out five and walking one.

Strasburg settled for a no-decision, but will come out the victor in most games this year if he pitches as he did on Opening Day. His 2-seam fastball was perfect, and his curveball was devastating.

Despite a shaky start for Ryan Dempster, the Cubs ace settled down and threw 7.2 innings of two-hit ball, while striking out 10.

Desmond, the hero of this game, finished 3-5 as he accounted for three of the four Nats' hits. Tyler Clippard pitched the 8th inning and was awarded with the win.

The Nationals will look to start 2-0 when they face the Cubs again on Saturday at 1:05 and send their newest stud Gio Gonzalez to the mound against Matt Garza. 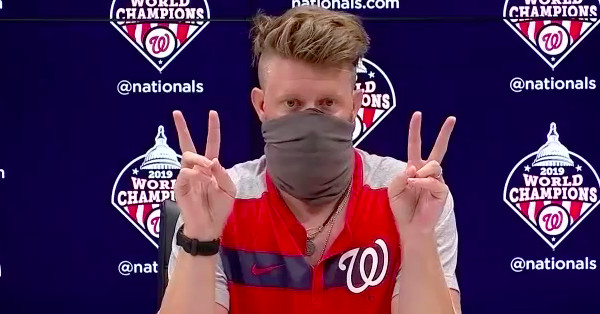