I'm going to be honest with you here. I have absolutely no idea how this article is going to go, because I don't have a surefire answer for the question above.

Before the hiring of Wade Phillips, I was leading the "Fire Kubiak" bandwagon, much to the disdain of my fellow suffering Texans fans. As far back as the end of the 2008 season, I was ready for a change. But after actually hiring an established defensive coordinator instead of yet another one of Gary Kubiak's drinking buddies, I was content with team owner Bob McNair's decision to retain him for one more season.

I said that I thought it would make Gary a better coach by having Wade Phillips on the sideline next to him, and it certainly started that way. With the defense being run by someone who actually knows what they're doing, Kubiak no longer had to hold the coordinators hand and could focus on running the offense that Bob McNair has become so proud of.

Everything seemed okay after their second consecutive 3-1 start, but then something happened. The team faced adversity with the loss of defensive stalwart Mario Williams for the season and star wide receiver Andre Johnson for who knows how long. Just like that, Houston dropped two in a row to put them back at an all too familiar .500 record. A certain number that seems to have become synonymous with the Kubiak era in Houston.

The obvious answer to most Houstonians is a resounding yes. And while I said that I was going to lay off of Gary Kubiak until the season was over, he has done a lot of little things in the past two games that have reminded me exactly why I wanted him gone in the first place. 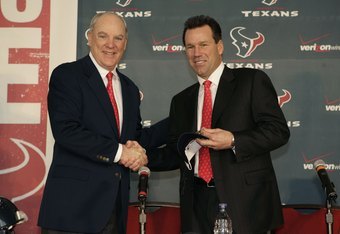 Clock management, an atrocious two-minute drill, questionable play calling, not allowing your quarterback to call audibles, stubbornness with playing certain players, poor skills at challenging bad calls by the officials and lastly, doing a poor job at making adjustments. On that last one, I could go on and on.

When it comes to making adjustments on the fly, he is one of the worst coaches in the league at it. It's the only way to explain the reasoning for the team getting off to fast starts only to fall flat in the second half and, namely, the fourth quarter.

However, looking at the Texans schedule the rest of this season, they could still win around 10 games if they just beat the teams they're supposed to beat. The division is one of the worst in football and the teams they have left to play have a poor combined winning percentage. There isn't one game you look at remaining and think they have next to no chance at winning it.

So let me ask you this: Does anyone think that Bob McNair is going to fire Gary Kubiak if the team makes the playoffs and loses in the first round? I don't. Bob has seemed fine with mediocrity for nine years, why would a tiny taste of success not make him jubilant?

When I ask if Gary Kubiak should be fired regardless of this season's outcome, I'm probably going to say yes. Short of making it to the Super Bowl or at least the conference title game, it needs to happen.

I just don't see Gary as a guy that can lead you to the promised land, and I never have. But that also is probably the last five years speaking, admittedly. Gary Kubiak did what I wanted him to do; he got this franchise out of the toilet and made them middle of the pack. But that's all he's done and it's taken him twice as long to do as almost every other coach out there that has taken over for a franchise that was as big of a mess as this one was in 2005. 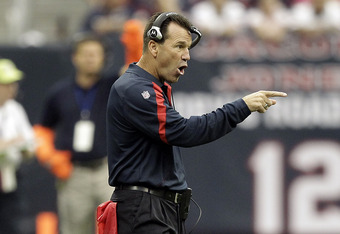 If there is an elite-level coaching option out there (I'm not going to mention names, because that's a completely different argument all together) and he wants to come here, well then you make that move. Because things are never just simply going to change overnight with the way the Gary Kubiak coaches. This is who he is and that's all there is to it.

A statement I always hear from fans is that they wish Gary Kubiak would show more fire and emotion with his team. I don't really agree or disagree with that because I'm in the camp that believes things like that and saying someone "has heart" is a bunch of elementary school talk. To me, that's the same as saying you tried your best. To say one player or coach has heart and another one doesn't, has just always sounded ludicrous to me.

In the end, should Gary Kubiak be fired at the end of this season? I'll say yes, even though I will let this season play out before I start calling for his job, again.

Will Gary Kubiak be fired at the end of this season? Absolutely not. Not unless this team just implodes to another sub-.500 record and I just don't believe their schedule will allow them to do that.

Get used to it, Houston. Gary Kubiak is going to be here awhile.

Mike Kerns is a featured columnist for the Houston Texans at Bleacher Report. Feel free to follow him on Twitter at @Zepp1978 and catch his latest Texans podcast at State of The Texans.