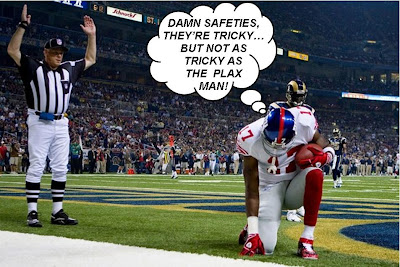 Hail to the Giants.

The New York Football Giants have suspended Plaxico Burress for the remainder of the season, albeit a game late for us Redskins' fans.

The fallout from Little Oakley Plaxico's self-inflicted gunshot wound may still cause problems for middle linebacker (former Redskin) Antonio Pierce, but Plax is done for the year.

Just days after Burress accidentally shot himself in the right thigh at a Manhattan nightclub, the Giants fined and suspended the star receiver for four games—the rest of the regular season. The team also placed Burress on the reserve non-football injury list, which means he won’t be back for the playoffs, either.

Well done, G-Men. The standard NFL move would have been to suspend him for the remaining regular season games and then bring him back for the playoffs.