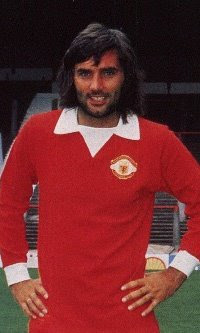 At the age of 15, Best was discovered in Belfast by Manchester
United scout Bob Bishop, whose telegram to United manager
Matt Busby read: "I think I've found you a genius." His local
club Glentoran had previously rejected him for being "too small
and light". Best was subsequently given a trial and signed
up by chief scout Joe Armstrong.

Best made his Manchester United debut, aged 17, on
14 September 1963 against West Bromwich Albion at Old
Trafford in a 1-0 victory. Two weeks later Best scored his
first goal against Burnley. By the close of the season Best
had six goals, and Manchester United finished second,
behind champions Liverpool.

In his second season, Best and Manchester United claimed the league title.

Best hit the headlines the age of twenty when he scored two
goals in a European Cup quarter-final match against Benfica in
1966, and was dubbed "O Quinto Beatle" (The Fifth Beatle) in the
press for his long hair, good looks and extravagant celebrity
lifestyle, and even appeared on Top of the Pops in 1965. Other
nicknames included the "Belfast Boy" and he was often referred
to as Georgie, or Geordie in his native Belfast.

The 1966-67 season was again successful as Manchester United
claimed the league title by four points. The following season
Best became a European Cup winner after scoring in the final
against Benfica. United won 4-1 and Best was later crowned
European Footballer of the Year and Football Writers'
Association Player of the Year; after that began
a steady decline.

“I'd have to be superman to do some of the things I'm supposed
to have done, I've been at six different places at six
different times.”

“I'm OK. Much better than on other occasions. It's true that
I've made lots of mistakes but I've never tried to bother anyone.
I want to stay alive, preferably in peace, without seeing every
one of my mistakes in the papers, and on many occasions,
even stories that are lies.”

“That's what children do - throw food. That's not fighting.
We were real men. We'd have chinned them.”

“He can't kick with his left foot, he can't tackle, he can't head
the ball and he doesn't score many goals. Apart from that, he's
all right.” ~ On David Beckham