When someone asks you who the all-time best quarterbacks are, who pops into your head? Joe Montana? Otto Graham? Johnny Unitas? John Elway? Peyton Manning? Tom Brady?

If you're a sports fan I guarantee at least one of those guys will cross your mind. That is what makes Elway the most overrated NFL quarterback of all time, the fact that he's put into the same category as those other five men.

I do think Elway was a good quarterback—maybe even a great one—but I believe it's absolutely insane that some people think he's the greatest of all time (that's you, Michael Wilbon). So I'm going start off by proving there is no way he is the greatest ever. And how can I do that? By comparing him to the guy I think is the best: Joe Montana.

A simple argument for Elway over Montana is that Elway had way more career passing yards and more career touchdowns. Well, those are longevity stats, not necessarily a good way to measure who's better. Of course Elway is going to have more passing yards—he started 67 more games than Montana, and with those 67 extra starts he only threw 27 more touchdowns.

So let's look and compare each of their 16 game averages. 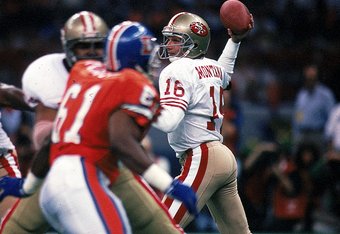 So in terms of who was the better regular season quarterback, the stats above show it's without a doubt Joe Montana. Montana was better in every way: His completion percentage was much higher, he averaged four more touchdowns and three fewer picks, had a way higher quarterback rating and had a higher winning percentage. You would have to be a fool to say Elway was better in the regular season.

As we all know the regular season isn't just what matters; for quarterbacks it's about the playoffs. So let's compare their playoff stats. This should be interesting.

But for a quarterback it's all about one game: the Super Bowl. And obviously Elway was a stud in the big game, right? Well, let's compare Super Bowl stats between the two.

I could not believe it when I calculated those stats. Aside from his last game, Elway wasn't just bad in the Super Bowl, he was god-awful. Montana was just as great as Elway was awful—he shined the brightest in the big game. Montana had more touchdown passes (five) in his last Super Bowl then Elway did in all five of his. Montana never threw a pick in the Super Bowl, while Elway threw at least one in every game. Montana's completion percentage in 18 percent higher and his quarterback rating more than doubles Elway's.

If you read the entire article up to this point and still think Elway is the greatest quarterback ever, you're either a very stubborn Broncos fan, a relative or friend of Elway, or there is something very wrong with the way you think.

I'm not just trying to prove Elway isn't the greatest ever; I'm also trying to prove he's the most overrated athlete of all time. Most people probably have Elway as a top three to five all-time quarterback. Well I have him at No. 10, behind Montana, Unitas, Brady, Manning, Dan Marino, Steve Young, Graham, Sammy Baugh and Brett Favre.

Out of those 10 guys Elway is the only one who was never named the first-team All-Pro quarterback. Elway and Marino are the only two of those 10 players without multiple MVP awards, and in 1987 when Elway won the award it should have been Jerry Rice's. Of the seven Super Bowl-era quarterbacks on my list, Elway easily has the worst completion percentage at 56.9 percent. That percentage is barely above the three non-Super Bowl-era quarterbacks (Baugh, Graham and Unitas, who played in the SB era but was past his prime), but the difference is anything above 50 percent was good back in the day. Elway, Unitas, and Baugh are the only three with quarterback ratings under 80, but Unitas and Baugh had very good quarterback ratings for their time, unlike Elway.

Elway never led the NFL in completion percentage, passing touchdowns, or quarterback rating—three of the most important stats for a signal caller. He only led the league once in passing yards and it was by seven yards over Steve Young, who had attempted almost 100 fewer passes than Elway.

I believe after all this I shouldn't have to argue and pull out stats to show why Unitas, Brady, Manning, Marino, Young, Graham and Baugh are better than Elway (just look it up for yourself if you don't believe me).

I have him and Elway very close, but in the end I went with Favre as the better QB and I'll show you why. Here is their regular season 16 game averages:

So Favre is better in every category except picks and wins, which are both right behind Elway. Favre has also been named first-team All-Pro quarterback three times to Elway's zero and Favre won three straight MVP awards during Elway's playing days. Favre has also led the league once in completion percentage and four times in touchdowns, categories that Elway never topped the league in. 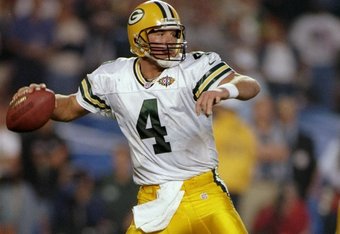 Again, Favre is much better in every category except picks and winning, but a 13-11 playoff record is pretty darn good and he started out 9-3 until he met Elway and the Broncos in Super Bowl XXXII.

So let's compare the two quarterbacks from that game.

We all know that the Broncos won and Elway got his first Super Bowl, but he was clearly outplayed by Favre. Terrell Davis was the MVP of that Super Bowl, and he earned it. He rushed for 157 yards and three touchdowns and was the main reason Favre and the Packersdidn't repeat.

That pretty much wraps it up. If you forgot some of the reasons I have John Elway as the most overrated quarterback of all time, I'll list a few off to you. He was a good—not great—regular season quarterback, had terrible Super Bowl stats, couldn't win the big one until Davis came along, never was a first-team All-Pro selection and there are at least nine other quarterbacks who I consider better.

So there you have it. John Elway is the most overrated NFL quarterback of all time.﻿ (I hope somehow Michael Wilbon reads this article).

If you disagree or have another overrated athlete in mind please feel free to share your opinion. 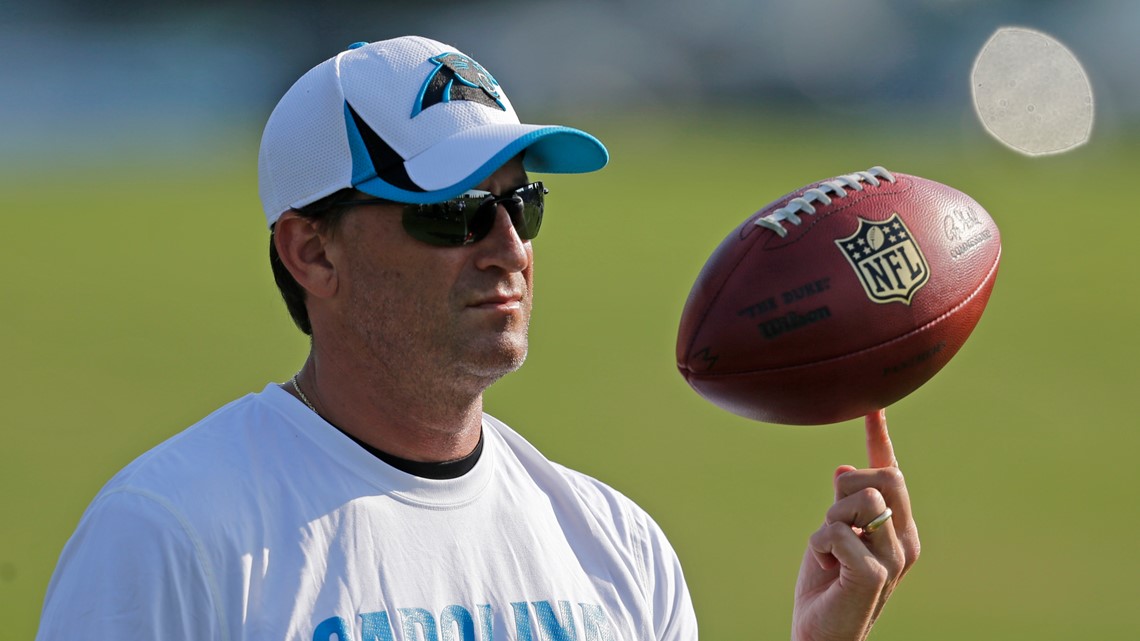 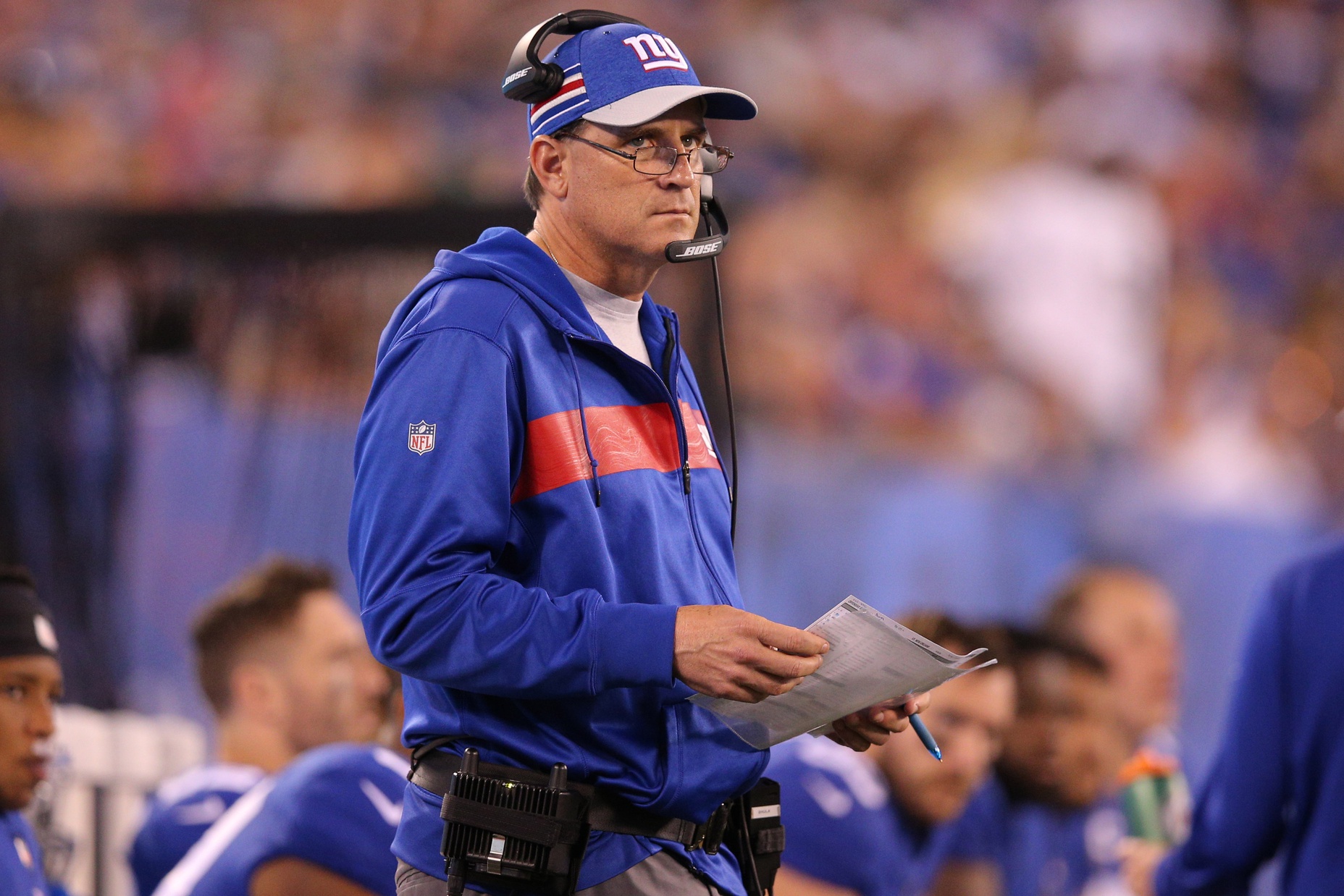