San Francisco Giants: The 5 Most Unlikely Wins of 2011 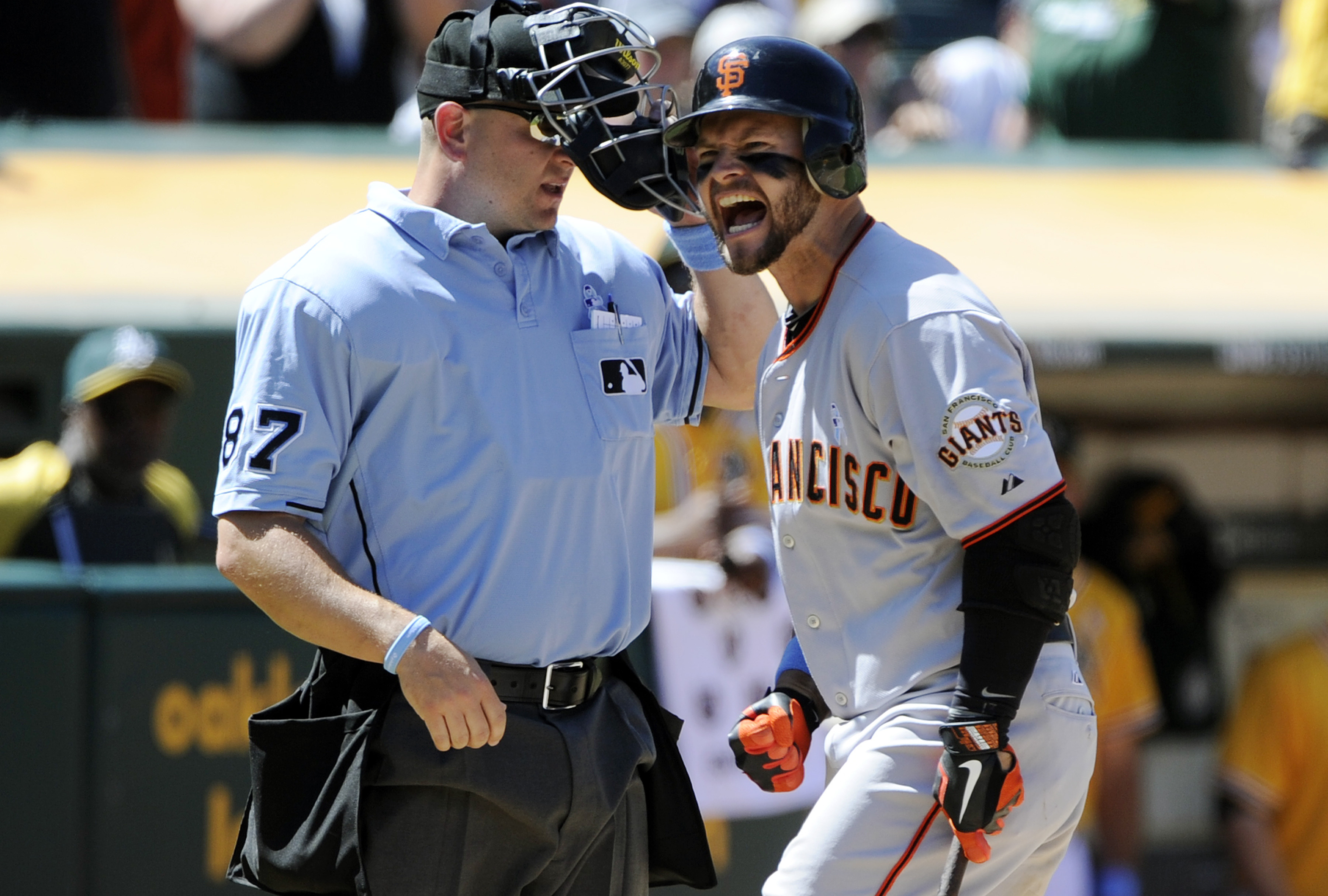 While the San Francisco Giants continue to wage a bitter war for the National League West division, it's impossible to deny that they have been one of the most exciting teams in recent memory.

Their lack of reliable hitters and excellent starting pitching, along with the league-wide drop in offensive production, have led to a very, very low-scoring environment.

Still, one of the most significant features of the Giants is their ability to come from behind, which has created some pretty interesting games. In this slideshow, I would like to show you the Giants' five most unlikely wins (in no particular order). 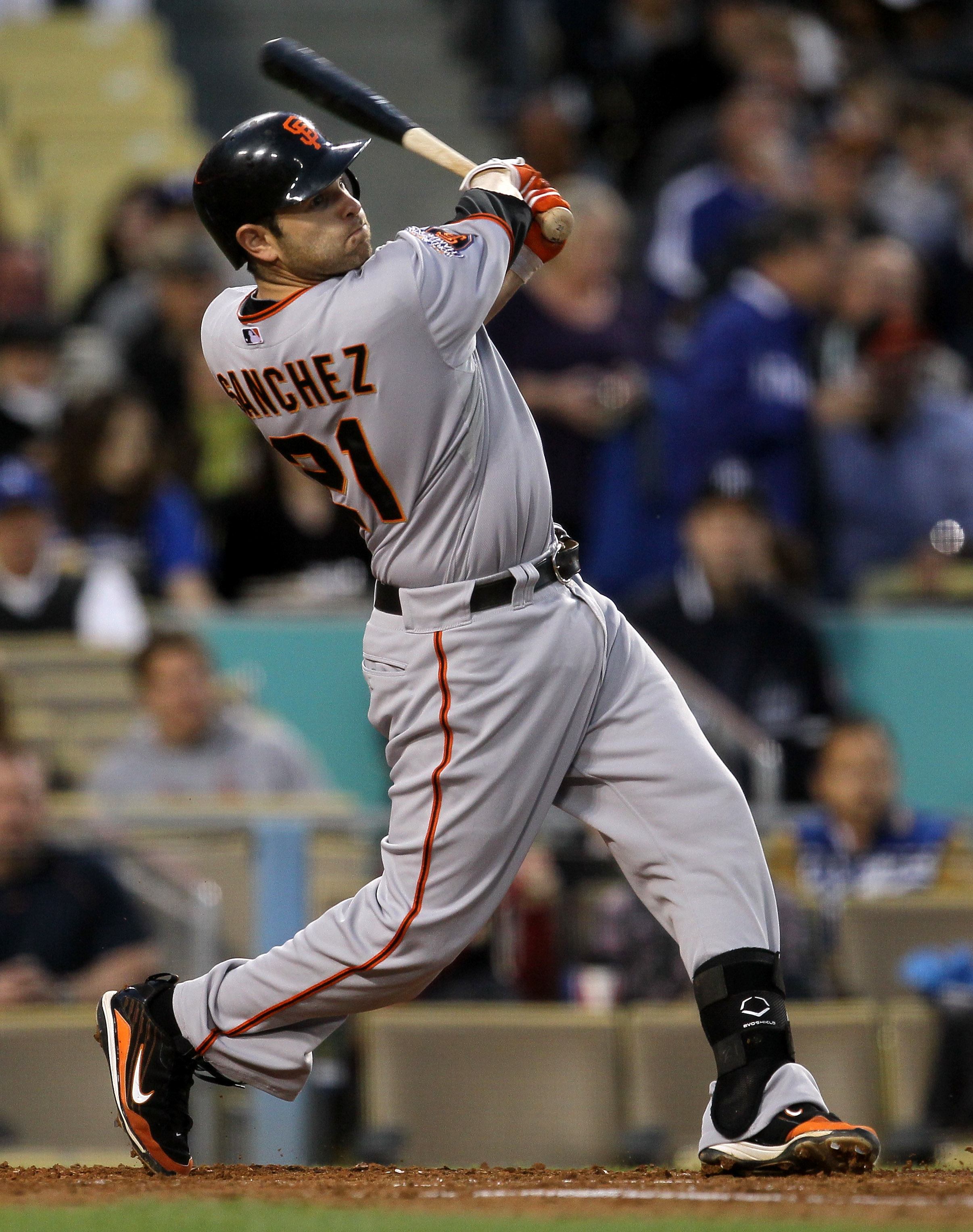 After dropping the first two games of the season to the Dodgers in Los Angeles, the Giants went to their third game just hoping not to get swept.

With their hitters still struggling to find their bats and the Dodgers looking more and more dangerous, the Giants seemed a far cry from the championship team that they had been just five months earlier.

With Matt Cain on the mound, the Giants found new life. The first two innings started the same, with the Giants failing to get a baserunner. The third inning saw the Giants score a run, but just barely; after two singles to lead off the inning, it took two groundouts to score a run, and the Giants took a precarious 1-0 lead.

Later on, they got hot. Freddy Sanchez, Aubrey Huff and Miguel Tejada combined to go 7-for-13 in the game with Sanchez hitting a double and a home run, knocking in three RBI and scoring twice. Mark DeRosa also had one of his best games in recent memory, going 2-for-5 with a double and two runs. 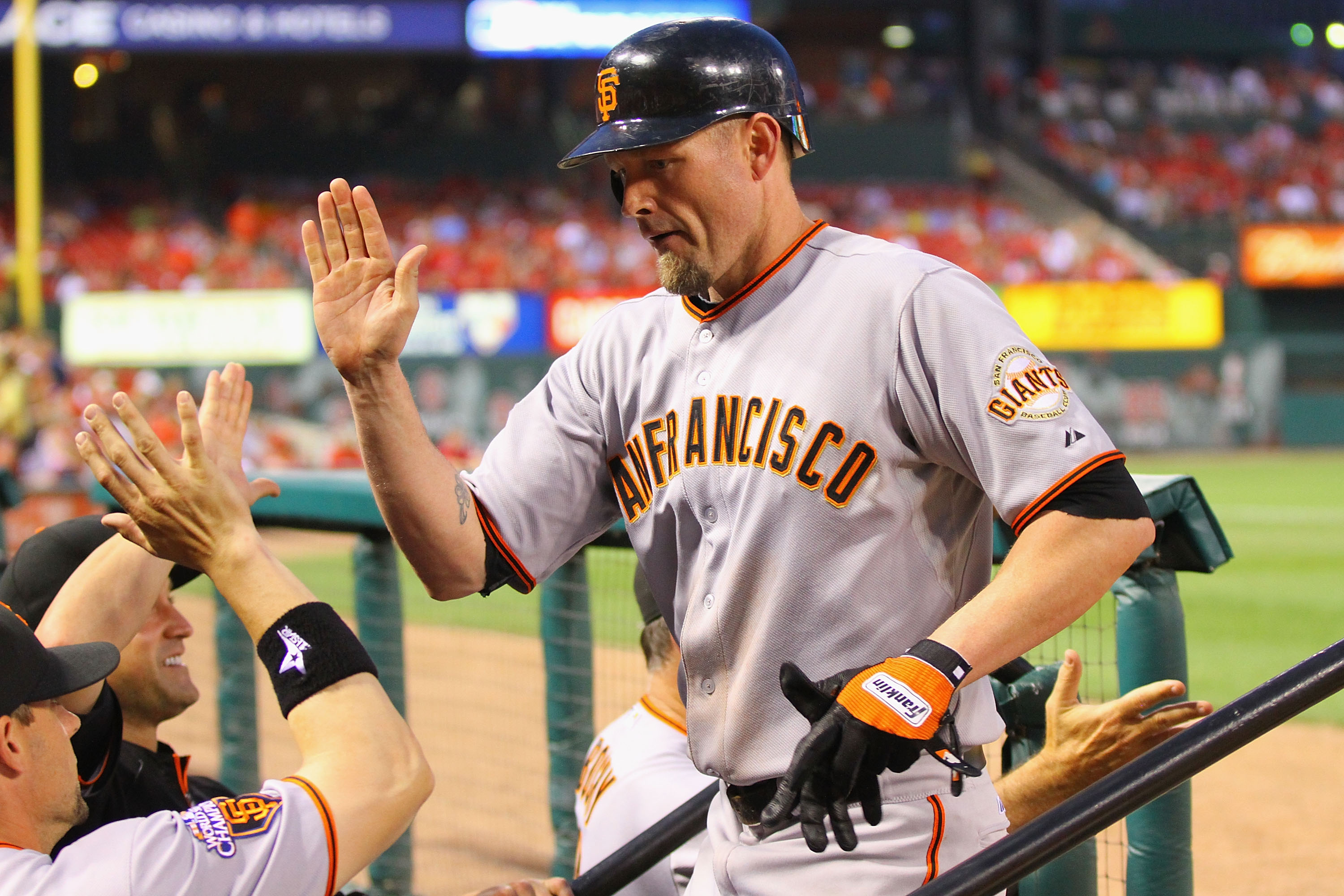 The Giants are not known for their hitting, particularly when it comes to out-gunning a team like the St. Louis Cardinals. Still, that's exactly what they did on June 2.

The day after beating the Cardinals in a nail-biting, 11-inning extravaganza, the Giants fell to an early deficit, down 3-0 after three innings. However, that's when the Giants got hot and never looked back.

Jonathan Sanchez settled down after a rocky start, shutting down the next six Cardinal batters he saw for clean fourth and fifth innings.

Aubrey Huff went 4-for-5 with three homers and six RBI, while Steady Freddy Sanchez knocked in four runs on a home run and a well-timed groundout. Andres Torres got three hits and scored three times, and even Jonathan Sanchez joined in on the fun, doubling and scoring in the sixth inning.

Sanchez lasted 5.1 innings but did not allow any runs after the initial three, while the offense powered its way to a 12-7 win, making up for Guillermo Mota's worst appearance of the year, in which he allowed four more earned runs. 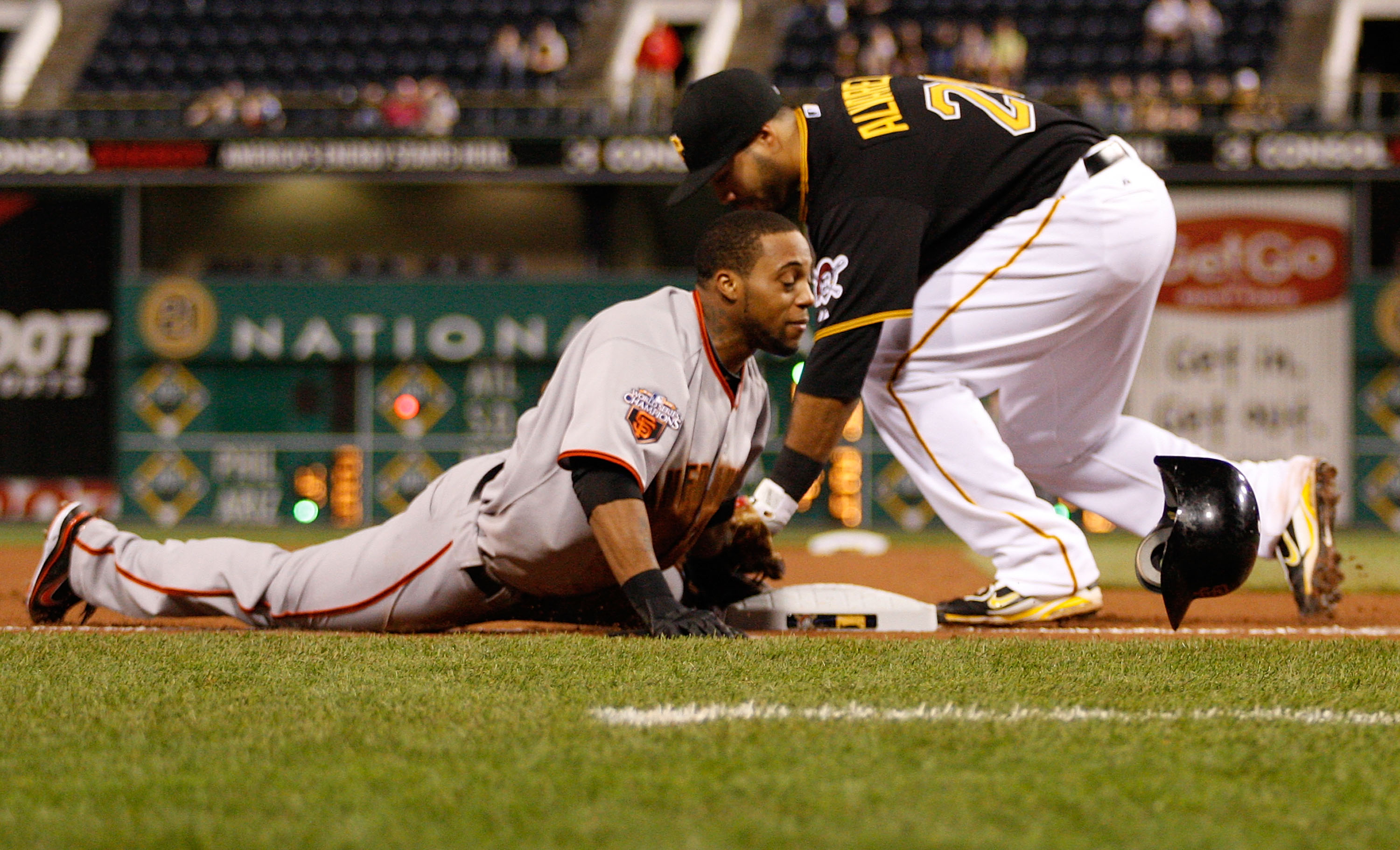 This game, also known as "The Darren Ford Game," was a game decided on the basepaths.

Despite a quality performance by Matt Cain, the Pirates carried a 2-1 lead going into the eighth inning. The Giants had managed just four hits so far and failed to stage any sort of rally against Pirates starter Charlie Morton.

Facing Pirates reliever Evan Meek in the eighth, Aaron Rowand popped a single into left field. Bochy, loading "the Bullet" into the chamber, sent Darren Ford to first to pinch run for Rowand and, after a perfectly executed hit-and-run by Freddy Sanchez, Ford advanced to third base, still with no out.

After Aubrey Huff failed to get Ford home, Buster Posey connected on a deep fly to left field, scoring Ford on a sacrifice fly.

Advance another two innings, after Ramon Ramirez, Javier Lopez and Sergio Romo combine to shut down the Pirates in the bottom of the eighth and ninth innings.

In the top of the 10th inning, Nate Schierholtz doubled, only to be thrown out at third base after a failed Ford bunt. Pirates reliever Joel Hanrahan, aware of Ford's speed and baserunning ability, clearly worried that Ford would take off, and threw pickoff throw after pickoff throw to first, trying to catch Ford sleeping.

That ended up being his downfall; he threw the ball past the first baseman, letting the speedy Ford motor all the way around to third base. The next play ended up being one of the most amazing plays of the year.

Freddy Sanchez hit a weak ground ball to the second baseman, who turned and lobbed a weak throw to first. Ford, seeing the weak, slow throw, took off for home, barely sliding past the catcher to score the game-winning run a split-second before the throw arrived. 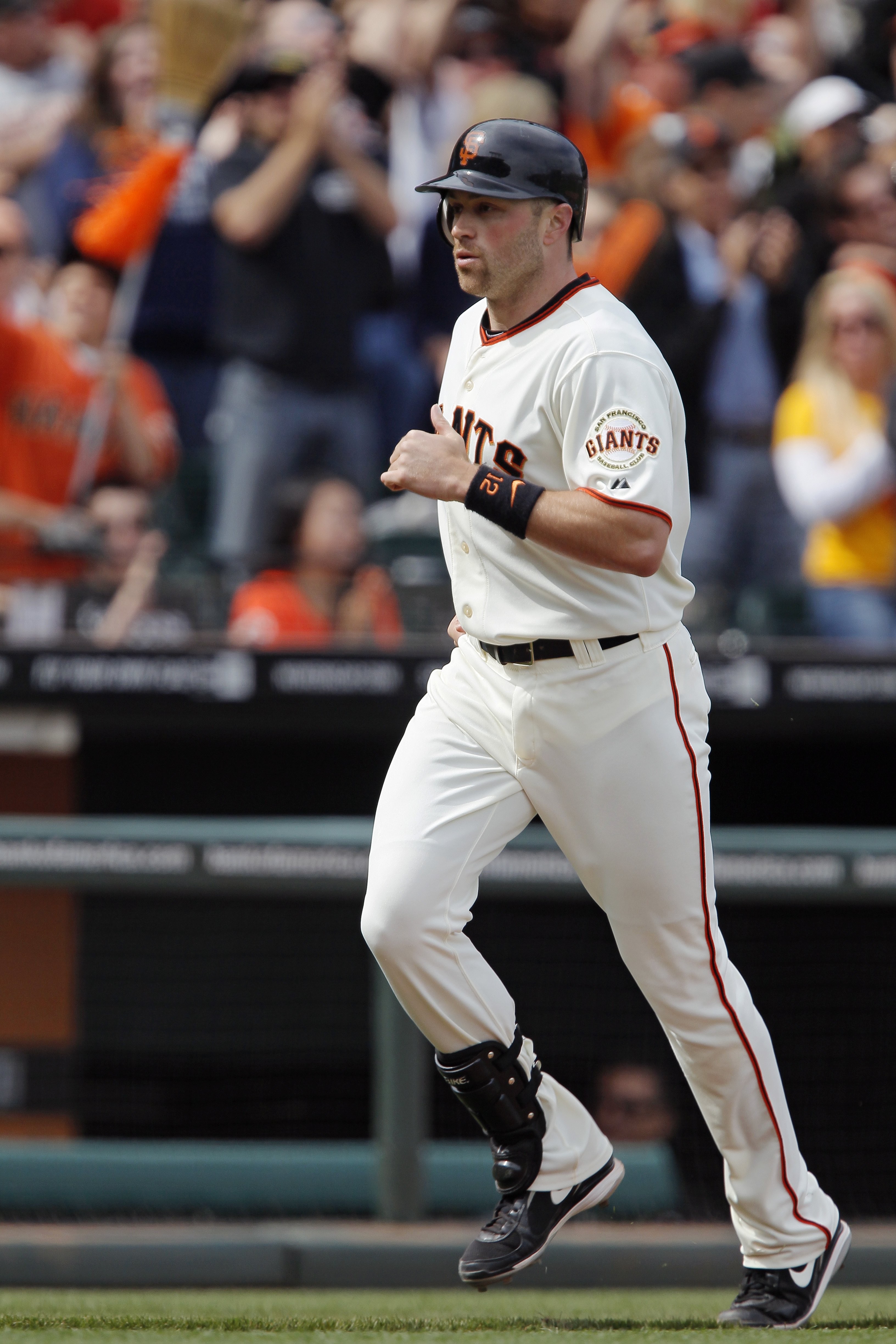 After taking the first two games of the Bay Bridge Series, the Giants were facing a determined A's team. After scoring just one run against Jonathan Sanchez, the A's rallied against Jeremy Affeldt and Ramon Ramirez, taking a 4-2 lead going into the bottom of the eighth inning.

After Miguel Tejada singled off A's pitcher Grant Balfour, Fontenot lined out to left field. Balfour got a quick 1-2 count against Nate Schierholtz, but Nate worked the count full before launching a two-run home run down the right field line, tying the game.

Both teams failed to score in the ninth and 10th innings, and Sergio Romo shut down the A's in the top of the 11th.

Darren Ford flipped a single to right field and immediately stole second base. After Buster Posey was internationally walked, Emmanuel Burriss came up to bat, having pinch-run for Pat Burrell in the seventh inning.

On the very first pitch, Burriss looped a single to right fielder Ryan Sweeney, who quickly fielded the ball and threw a bullet to catcher Kurt Suzuki, who scooped the ball and swiped a tag to Ford, who beat the throw for the walk-off win.

April 9: 3-2 Against the Cardinals 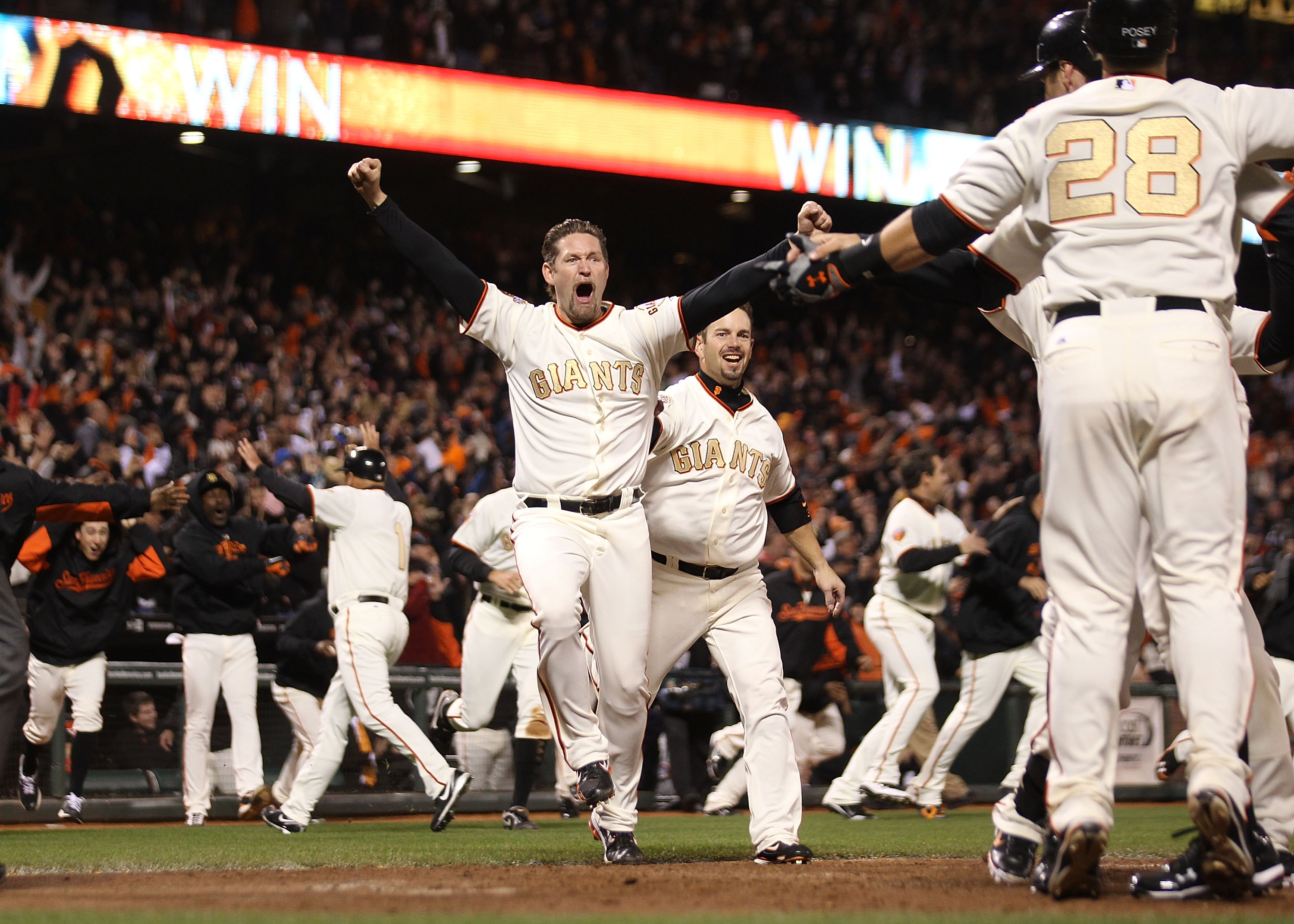 Raise your hand if you remember this one. After a heartwarming ceremony in which the 2010 Giants were awarded their World Series rings, the Giants failed to do anything against Cardinals starter Jaime Garcia.

Wearing their gold jerseys, the Giants managed just one run through five hits and a walk against Garcia and reliever Miguel Batista, who cut down the Giants for eight innings with just 108 pitches.

Down 2-1, the Giants faced a humiliating loss. In the bottom of the ninth inning, beleaguered Cardinals closer Ryan Franklin came in to shut down the Giants.

Franklin, who had blown a save the day before and had converted just one of three save chances on the year, got a quick out against Aubrey Huff before Buster Posey singled to right field. Pat Burrell drew a walk, and Brandon Belt came in to pinch run, before Aaron Rowand flied out, bringing the Giants to their last out.

In stepped Miguel Tejada, who battled Franklin like a man possessed. After working the count full, Tejada fouled off two more pitches. On the ninth pitch of the at-bat, Tejada connected, shooting the ball to left-center field.

Center field Colby Rasmus, streaking to his right, reached the ball, sticking his mitt to grab the ball. But his momentum carried him too far.

Overrunning the ball, Rasmus couldn't get a good hold, and it fell to the ground. Posey and Belt, both running with the pitch, both score, ending the game with the second straight walk-off win.