LeBron James: The 12 Dumbest Quotes of His Professional Career 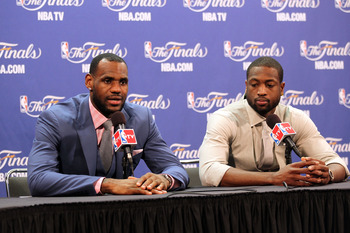 The most talented individual to ever step on a basketball court? Sure.

Possesses the athletic ability and the basketball IQ to go down as one of the greatest to ever play? Can't argue with that.

Does all of that translate to LeBron James being a perfect player? Not at all.

To prove that, all you have to do is listen to what he says from time to time. James may be recognized as one of the most athletic players to play the game of basketball, but he's also the most candid, and he can say some things that he'd probably like to take back later down the road.

He's been one of the NBA's most talked-about players before he even was a member of the organization. As a high schooler, James was being hyped as possibly the greatest player his age. He has considerably grown physically and mentally over time and has earned countless accolades that have helped strengthen his legacy.

He still lacks the most important piece of hardware, but it will come in due time as long as he, Dwyane Wade, and Chris Bosh continue to stay the course.

Rather than looking on the court, this specific piece is dedicated to what happens off the court with LeBron. His mouth sometimes overshadows his game as it only enhances the idea that James is too egomaniacal for his own good. As if the tattoo on his back doesn't show just how confident James is in his abilities, he can also proclaim it just to make sure that we all know he is LeBron James and we are not.

He's a terrific player, but sometimes he needs to let his game do the talking. These past finals have been the perfect example as he proclaimed that he would be more aggressive in his game. It turns out that it was all talk as James merely became the same player that he was in games before and after.

James has a way of motivating his opponents more than himself at times, and for that we dedicate this article of his most outlandish quotes to him. 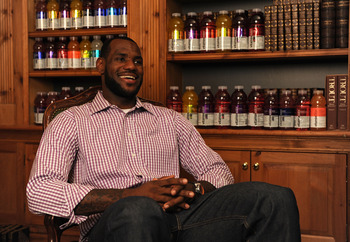 "This fall, and this was a very tough decision for me, but this fall I will be taking my talents to South Beach and joining the Miami Heat."

A few days prior to LeBron James' decision, it was believed the New York Knicks, New Jersey Nets and Cleveland Cavaliers were the favorites. It wasn't until ESPN NBA analyst Chris Broussard reported on the day of "The Decision" that the Miami Heat became the favorites after hearing word that James had already made a deal with Dwyane Wade and Chris Bosh.

'The Decision' came and went with the Heat and the Boys and Girls Club of America coming out the victors of the LeBron sweepstakes. 'The Decision' raised half a million dollars for the charity, but it was still looked at in a negative light more than anything because of how it was conducted.

The entire Cavaliers fanbase was embarrassed and mortified on a national level as James announced his decision for the waiting country to hear.

Even the way he said he would leave was a travesty. His ego rears its loud and ugly head once again for the world to see with Cleveland receiving the brunt of it.

LeBron Responds to His Haters 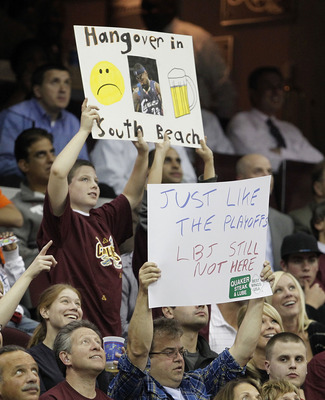 "All the people that were rooting on me to fail, at the end of the day, they have to wake up tomorrow and have the same life that they had before they woke up today. They have the same personal problems they had today. I’m going to continue to live the way I want to live and continue to do the things that I want to do with me and my family and be happy with that. They can get a few days or a few months or whatever the case may be on being happy about not only myself, but the Miami Heat not accomplishing their goal. But they have to get back to the real world at some point."

You just lost the NBA Finals, and this is how you respond to your critics?

Rather than possibly saying that he's going to come back stronger than ever next season to prove them wrong, he belittles them by talking about how much more successful and well off he is. While it's true the average NBA fan probably doesn't possess the funds that James has, it doesn't mean LeBron has to make sure everyone knows it.

In the end, those critics have just as many rings as LeBron James.

LeBron Responds to a Reporter's Question

Was the question nonsensical following Miami's Game 3 loss to Boston in the Eastern Conference Semifinals? Yes.

Dwyane Wade isn't a dirty player in the least, and he's proved that over his eight seasons.

LeBron James calling someone '"retarded," however, shows that he still has some growing up to do. 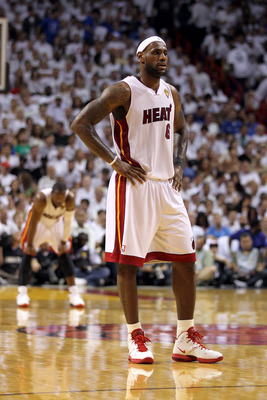 "Man, meeting Michael Jordan for me was like...black Jesus walking towards me. It was overwhelming to me to finally meet the guy I've looked up to my whole life," LeBron James on the Oprah Winfrey Show in 2005.

Don't mix religion and politics is how the saying goes. Mixing LeBron James with religion and basketball should be the new one.

We understand Michael Jordan does possess an aura and supernatural abilities when he steps out onto the court, but it doesn't mean we call him "black Jesus."

LeBron on the State of His Cleveland Cavaliers 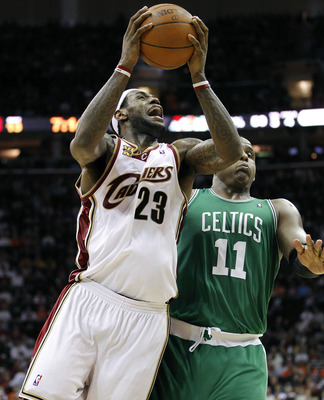 "A LeBron James team is never desperate," LeBron James after Game 5 of the 2008 Eastern Conference Semifinals vs. the Boston Celtics.

Referring to yourself in the third person always puts you in a negative light.

Saying your team isn't desperate and then losing a playoff series a few days later only reassures the negativity already surrounding you. 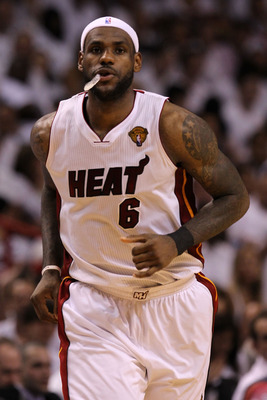 "To all the positions, I just bring the determination to win. Me being an unselfish player, I think that can carry on to my teammates. When you have one of the best players on the court being unselfish, I think that transfers to the other players," LeBron James in a pre-draft press conference in 2003.

Having confidence in your basketball abilities is key to being a successful player. There's a fine line, however, between being confident and being cocky, and LeBron James crossed it one more time by claiming that his unselfish abilities transfer to his teammates because of just how talented he is.

LeBron James on Going Back to Cleveland 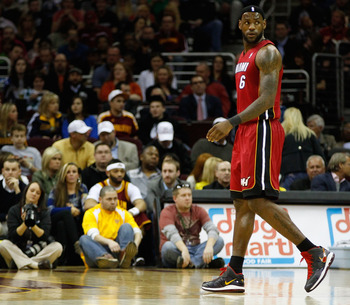 "If there was an opportunity for me to return, and those fans welcome me back, that would be a great story."

There are just so many things wrong with his statement to GQ last August.

First off, you're a member of the Miami Heat. No Heat fan wants to hear about you going anywhere else, especially back to Cleveland.

Secondly, Cleveland will be the last team to ever want you on its team. Even though you led the Cavs to the seven best years in franchise history, they'll always remember 'The Decision' and your inability to lead them to a title win.

LeBron James on Dealing with His Finals Loss 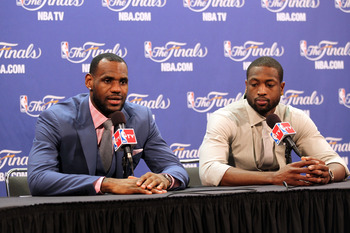 "The Greater Man upstairs know when it's my time. Right now isn't the time."

This was LeBron's first tweet following the Miami Heat's Game 6 loss to the Dallas Mavericks.

It's nice to see that James is a religious man, but you have millions of fans waiting to hear some reassuring words and this is the best you can come up with? Not a "we'll come back stronger next season" or a "thanks" to the fans that stuck with him and defended him all year?

James needed to put his ego aside on this one. Dwyane Wade thanked the Heat fans for the ride, and it would have been wise of LeBron to do the same thing. 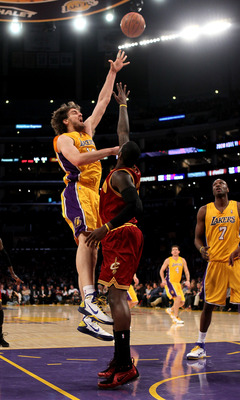 "Crazy. Karma is a b****. Gets you every time. It's not good to wish bad on anybody. God sees everything!"

Dan Gilbert and Cleveland certainly didn't warrant any praise from James, especially after the letter Gilbert sent out following James' decision, but this is just cold. Following the Cavaliers' 112-57 loss to the Los Angeles Lakers, James sent this tweet out as an indirect message to Gilbert and the Cavaliers who had berated him when he returned to Cleveland on December 2nd and burnt his jersey upon his decision to leave.

The worst part was that he rescinded this tweet and claimed it was not directed in any way toward the Cavaliers.

LeBron James on His Team's Defense 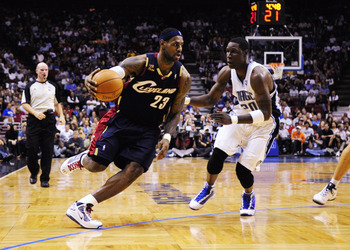 "I'm only one guy. I took Hedo in the first game and Rashard hit the winning shot. I took Rashard in the second game and Hedo hit the shot. If I could clone myself, we'd be all right. But I can't," LeBron James before Game 3 of the 2009 Eastern Conference Semifinals against the Orlando Magic.

LeBron James has made it onto three all-defensive first teams over his career and for good reason.

However, it doesn't mean you have to reassure everyone you are one of the league's best defenders by putting your teammates down. I'm sure if we could clone you, you'd be able to leave your talents in Cleveland as well as bringing them to Miami, but we can't, as you said. 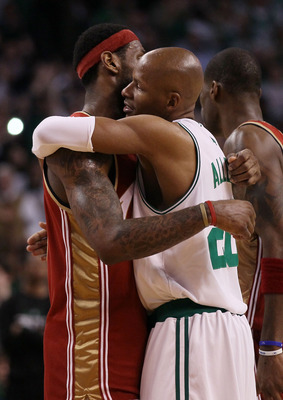 "I’m a winner...I’m a competitor. That’s what I do. It doesn’t make sense for me to go over and shake somebody’s hand," LeBron James following Game 6 of the 2009 Eastern Conference Finals, in which he was criticized for not shaking hands with the Magic.

Winner or competitor, there's no excuse for bad sportsmanship.

It was wrong of the media to not call out the number of players on Boston and Chicago who didn't shake hands with the Heat following their series wins, so that we could hear what they had to say on the situation. James needs to be the bigger man in these types of situations and needs to congratulate the opposition on their success.

People wonder why there are so many critics of LeBron.

LeBron James on His Talent 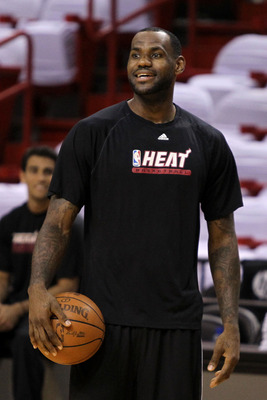 "Cleveland fans are awesome, but I mean, even my family gets spoiled at times watching me doing things that I do, on and off the court," LeBron James to GQ in August.

I understand LeBron. I'm looking at myself in the mirror as I write this.