With a bad team, arranging the batting lineup is akin to rearranging deck chairs on the titanic, but on a contending team like the Reds, I believe there are a few adjustments that could be made that will help the team as a whole.

Without further ado, with numbers to back up my thoughts, I present what would look like a good everyday starting lineup for the Cincinnati Reds. 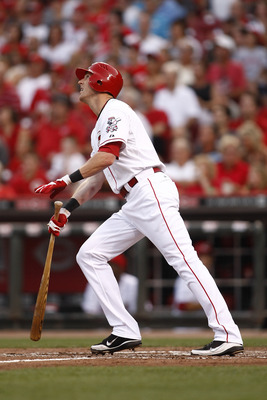 Heading into the season, there was a fair amount of criticism pointed at Dusty Baker for his decision to bat Drew Stubbs in the leadoff spot.

Though he continues to strike out at a frightening pace, he has settled into the role, batting a somewhat respectable .268 with a .344 OBP out of the spot (heading into action on Saturday).

You don't want those strikeouts, but you will take the speed and the home run power, and with no one else on this team suited to bat leadoff, Stubbs is doing reasonably well at this spot.

Plus, look around at some of the other leadoff hitters in the league. There aren't too many Rickey Henderson's out there anymore.

This is two fold, as not only should Chris Heisey be getting more playing time, but in my opinion, would be an excellent No. 2 hitter in the lineup.

The sample size is small, as he only has eight at bats at this spot.

With Votto batting behind him, he's very likely get some good pitches to hit.

Not much to say here with Votto, as he has batted third all season and should continue in that role.

The lack of power this season is a bit surprising, but that should pick back up sooner or later. 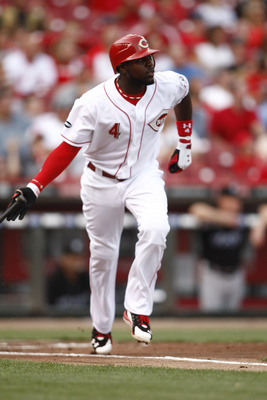 Currently: has no consistent spot

This team has been searching for a cleanup hitter all season, as they have tried different guys.

Scott Rolen is ill suited for the role, as he had batted .196 out of the spot. Love his effort and heart, but you just can't have a 36-year-old with declining skills batting cleanup.

Jay Bruce is only batting .224 out that spot, as he was batting fifth during his hot streak in May.

That leaves Brandon Phillips, who was once a fairly decent power threat out of the second base position, but that's not really the case anymore. 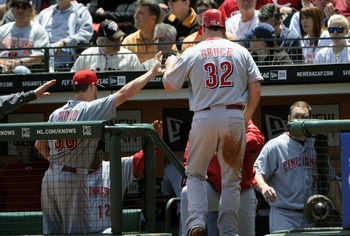 Currently: bats mostly fifth, but has been moved around the order some

The thinking here is, if you have Votto-Phillips-Bruce, you give the opposing pitcher the lefty-righty-lefty matchup, without having two same-sided hitters back-to-back.

Plus, out of Bruce's 17 home runs, 10 have been while batting fifth.

Dusty Baker seems to have recognized that Scott Rolen shouldn't be batting cleanup, but Bruce's recent slump and his move to fourth probably isn't coincidental.

Put him back to fifth, where he belongs.

Currently: has been hitting cleanup most of the season, but is being moved around.

Scott Rolen shouldn't be a cleanup hitter on a team with hopes to win another division title, as I have touched on these points on prior slides.

Plus, the sample size isn't very large, but in 32 at bats in the sixth spot, he has a .375 average. Perhaps something to build off of. 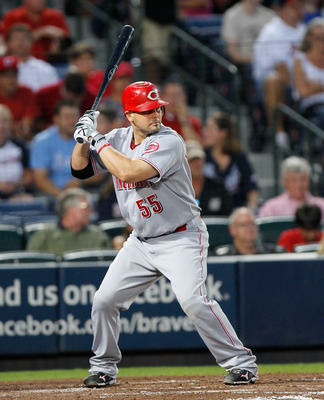 Currently: both players usually bat here in the seventh spot

Ramon Hernandez is an excellent hitter as far as bottom of the lineup guys go. Seventy-six of his at bats have come in the seventh spot, and he's proven to be a clutch hitter who gets on base.

Ryan Hanigan isn't the hitter Hernandez is, but he can grind out at bats. There's always been a bit of chatter about batting him second, as he does get on base, but I never liked the idea of a slow player who doesn't hit for power batting so high up in the lineup. 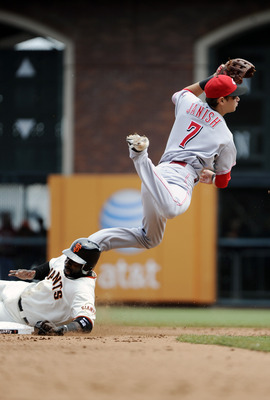 Currently: bats mostly in the 8-hole

This is where Paul Janish belongs. Simply put, he cannot hit, and this is where hitters who can't hit belong.

Also, he's the only one I've chosen a photo of playing the field, as that is who is he at the core.

Inexplicably, he has had 20 at bats in the two-hole, and his backup, Edgar Renteria, has had 54 of his 108 at bats in that spot as well.

You see their batting averages, and their on base percentages.  That experiment simply has to stop