Bostons Top Five Sports Moments of the Past 10 Years 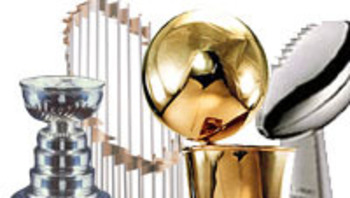 With Bostons recent championship run, how could we not cap off the top five moments the past decade has offered Bostonians and fans alike.

It was only last night that the Boston Bruins took home the Stanley Cup, ending a 39 year old drought, and bringing peace to the fans left out from other local teams success.

It was their turn.

Time to come out from the shadows that the Red Sox, Patriots, and Celtics have created over the past 10 years.  But now the quad-fecta is complete, and there is no doubt that this ranks with some of the more memorable moments and Bostons 10 year championship run.

Without further ado, I give you my top five Boston sports moments since 2001, from where the Patriots started to where the Bruins ended.

It gives a whole new meaning to the phrase Title Town, USA. 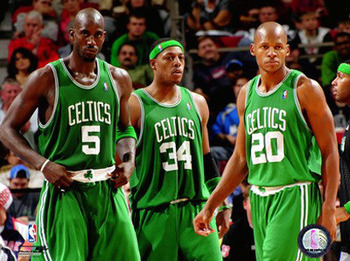 What appears to be the new blueprint of success in the NBA, the Celtics kicked off.

On paper this looked as scary as any team out there.  Though the question was, would this new all-star cast gel enough to make a title run and leave their egos at the Garden door?

All questions where answered when The Boston Celtics made it to the NBA finals after a 22 year drought.

What made this even more memorable was the fact they played their historic rivals for a shot at the title, the Los Angeles Lakers.

What else could you ask for?

Two teams with more history behind them than any in the NBA today, and both fitted with future hall of famer's that wanted that title to add to their already impressive careers.

It was pure bliss for any die hard Celtics fan to witness.  What looked to be a seven game series,  the Celtics proved that home court would decide this clash of titans.

Regardless of who I was rooting for, it was a really good series.  Back and forth, crossing your fingers that it wasn't your team that made the mistake that would cost them the title.

Emotions where high on the Celtics side.

Paul Peirce, the long tenured man in green could not hold back his excitement. He was not ashamed of any tears that fell while holding the Larry O'Brien trophy for all the Garden to see.

Garnett, already known for having his emotions on his sleeve, was just as happy as #34. 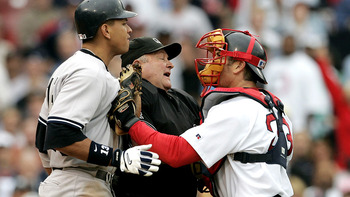 Even though this is number four on my list, it's the one most likely to be burnt into my memory for the next 50 years.

In 2004, two of the biggest teams in baseball were ready to battle it out for rights to the AL pennant, and a chance to go to the World Series.

It was Red Sox Yankees at it's peek.

As you might remember, the year before the Red Sox were knocked out of the ALCS by some late game heroics (no names mentioned to protect the innocent), and sent packing only to watch the big game from the couch.

Not only watching these two teams duke it out for the ultimate shot in baseball would have you at the edge of your seat, it was also the style on how this game was won.

Down 0-3 to the New York Yankees, it looked like the Sox were dead in the water.  The numbers didn't lie.

No major league team has ever come back from an 0-3 hole to win it, especially in the American League Championship Series.

And so it began.

After the grave was dug, the Sox came out and won game four.  At this time, it was more frustration than actual excitement.

It was almost like you were rooting to put the old dog down.  It was nice to see a win, but at that point, you just wanted it to be over.

Then boom, a game five win.  All of a sudden the series it at 3-2. Still, it wasn't looking good.

Sure enough, a game six win.

Hell has frozen over and the series is tied at three a piece.  Who saw that coming?  I sure as hell didn't.

It was then that the Red Sox owned the title of the heartbreak kids, but was this really going to happen?  Are the Sox going to come back from 0-3 to finally make it to the World Series after 86 years?

And beat their century long rivals while doing it? 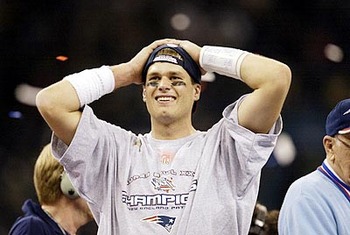 Here we find another Cinderella type story coming out of the Bay-state.

I introduce the 2001 New England Patriots—what we now know as the start of the Brady—Belichick era.

Coming off a fifth place finish in Bill Belichick's first season in 2000, the Patriots were not expected to fare much better in 2001.

In the second game of the season, Drew Bledsoe, the Patriots number one draft pick, was injured on a hit by Jets linebacker, Mo Lewis (someone who I'd like to shake hands with).

This lead to the backup Tom Brady, a scrawny sixth round pick the year before to enter the game.  And thus began the dynasty that is known today.

The Patriots ended up going 11-5 under their new quarterback, making the postseason and making history.

Before all of this went down, the Patriots were not exactly fan favorites around town.

Season after season of mediocrity saw the fan base dwindle, leaving only the die hards with hope for a championship.

Their patience paid off, with style.

We all remember that notorious "Snow Bowl" game where the Patriots played the Oakland Raiders—a game to be remembered with all the drama that unfolded that night.

The end result is that the Patriots beat the Steelers in the AFC Championship game to reach Superbowl XXXVI—as clear underdogs mind you.

That's where things got interesting.

The Patriots ended up facing off against the "Greatest Show on Turf," the St. Louis Rams high powered offense lead by Kurt Warner and Company.

It was a hell of a game. With the last second heroics from Adam Vinatieri—yet again—the Patriots won Superbowl XXXVI with a 48 yard field goal and seconds left in the fourth quarter.

Some say Vinatieri is the most clutch kicker this league has ever seen. 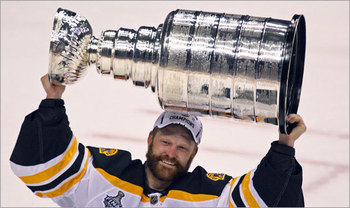 Not even 24 hours ago the Boston Bruins defeated the Vancouver Canucks in game seven of the Stanley Cup Finals, one of the better series the NHL has seen the past few years.

What a relief for all the puck-heads here in Boston.

Like the 2001 Patriots, the Bruins where the clear underdog in this series.

No one was giving them a shot.  After all, the B's had won every last game 7 this postseason, why would this be any different right?

With a little help from Finals MVP Tim Thomas, the Bruins beat out the favored Canucks 4-0.

Some say, it was the best performance from a goalie in the history of the league.  I'd sure as hell say so.

With such a lop-sided home ice advantage, the Bruins seemed to be unstoppable in Boston. To be honest, it looked like they were just a hair shy of dominating on the Canucks ice also.

With the injured Nathan Horton out due to a vicious hit that happened in game three, the Bruins looked like a team built on revenge. Take out our guy on a cheap shot, we'll bury you at home during game seven, with no remorse or mercy.

Sure enough, right before the final game of the series, Nathan Horton came out to pour some of that "dirty water" from back home onto the ice in front of the Bruins bench.

Not sure if that helped, but I'm all for superstition in sports.  Reason being, Exhibit A—2011 Stanley Cup Champions.

Congratulations boys, you have definitely earned my attention. 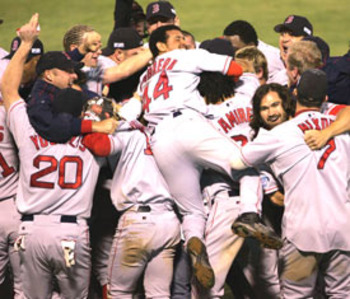 Ladies and gentleman, my favorite moment in Boston sports.  Without question.  It seems that championship droughts will cause the amount of attention you receive.  Let me be the first to tell you that this was due more than any title in Boston.

You could have the argument that this used to be a basketball town, or a hockey town.  But there is one team that has been around long before Stanley Cups, Super bowls and gold shiny basketballs.  The Boston Red Sox.

As I stated in #4, this was the end result for a season you couldn't make up.  Beat your century long rivals, in historic fashion, and mow through the St. Louis Cardinals if they were some half rate single-A team.  It was simply bad timing for Pujols and company.  The Sox were coming of a high they got during the ALCS and there was no stopping them.

When you have a franchise that has been playing for over a 100 years, and haven't made a championship appearance in 86 years, that is something you need to look out for.  Especially on a city hell bent on winning championships, coming home empty handed would have been worse then not making it at all.

Sure enough, the Red Sox delivered one of the most anticipated championships in the cities history.  This was by far the best moment Boston has witnessed over the past decade.  If you need to question that, then your living in the wrong state. 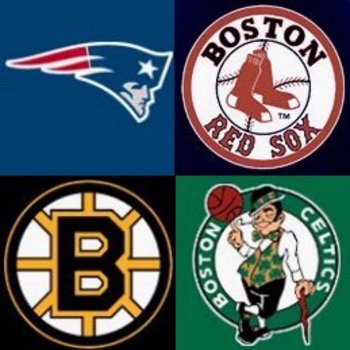 There you have it folks.

My top five Boston sports moments of the past 10 years.

You could say where certain teams ranked on this list on personal preference, but I'm sure this is as close as you can get.

Since 2001, Boston sports teams have won seven championships in 10 years.

Pretty impressive no matter where you're from.

I can honestly say that I can die happy now.  If a bus where to strike me dead on the street today, I would have no care in the world.

In my 29 years of living, seven of them was spent witnessing my home team win championships.  For any sports fan, life would be complete.

Did I mention the Red Sox and Patriots are showing no signs on slowing down?