With the 2011 NBA Draft right around the corner (June 23rd) we must brace ourselves for the unavoidable  roller coaster that is the wheeling and dealing of draft day trades.

Trades at anytime of the year are exciting, but few can capture the imaginations of every NBA lover like a draft-day deal.

Due to the combination of short and long-term implications, as well as the actual trading of proven veterans for unaccomplished youngsters, trades on draft day tend to be a little more fascinating than those at any other time.

They also lend themselves to beautiful "hindsight is 20/20" conversations, which are always fun.

But more often then not, one team gets a gem of a deal, while the other gets, well, screwed.

So many heists—big and small—are executed around this time of year, so it's tough to narrow the list to a convenient number.

My sincerest apologies to the fans that think their front office's draft day suicide was more heinous than the following 10 blunders. 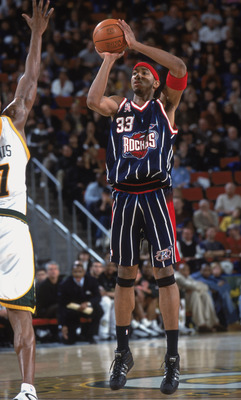 In 2001, the Houston Rockets shipped Richard Jefferson, Jason Collins, and Brandon Armstrong (the 13th, 18th, and 23rd picks in that draft) to New Jersey for seventh overall pick Eddie Griffin.

Many Houston fans thought they were the ones getting the steal at the time (this piece is particularly funny) but within a few years it was quite obvious which team came out on top.

Jefferson and Collins played crucial roles on a Nets team the made it to back-to-back NBA Finals in 2002 and 2003, while Griffin suffered from depression and alcoholism before eventually being released by the Rockets in just his third season.

Griffin was out of the league by 2007 and tragically died just months later. 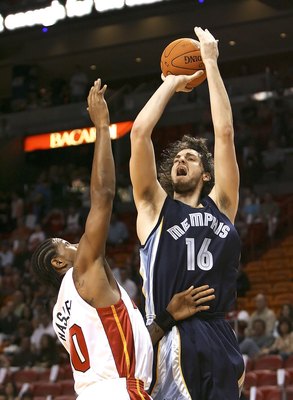 In the same draft as the Houston's giant mistake, Atlanta made a similarly terrible decision to trade third overall pick Pau Gasol, Brevin Knight, and Lorenzen Wright to the Vancouver/Memphis Grizzlies for Shareef Abdur-Rahim and Jamaal Tinsley (27th overall pick).

This trade didn't look so lopsided in year one, as Abdur-Rahim was simply marvelous: 21.2 points and nine rebounds per game, including a 50 point game and an appearance in the all-star game.

But within two-and-a-half years, Abdur-Rahim was traded by Atlanta and his career began to enter a downward spiral that ended with his retirement in 2008 at just 32 years of age.

Meanwhile, Gasol has been the NBA Rookie of the Year, a four-time All-Star, three-time All-NBA team member, two-time NBA champion, and is still perhaps the most skilled big man in the league. 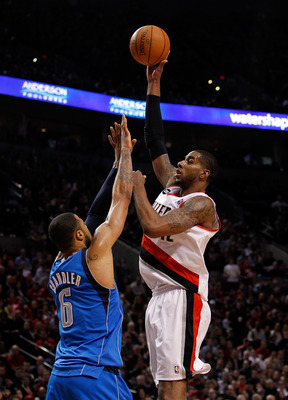 Portland pulled off two great draft day trades in 2006. The first landed them LaMarcus Aldridge (No. 2 overall) for Tyrus Thomas (No. 4 overall) and forward Viktor Khryapa.

This one is starting to look worse and worse every year.

Aldridge had an unimpressive rookie campaign, but has improved drastically each year. Last season, he averaged career highs in every major statistical category, was selected to the All-NBA third team, and became perhaps the most unjustifiable All-Star snub of all time.

He even put the injury-riddled Blazers on his back and carried them to the playoffs, a feat that seemed impossible months before.

Thomas meanwhile spent just three and a half years in Chicago before being shipped to the Bobcats. His career averages of 8.3 points, 5.2 rebounds, and 1.4 blocks per game are underwhelming to say the least. 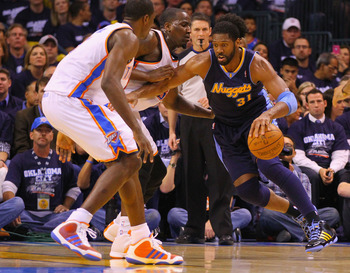 The trade was a head-scratcher right away, as McDyess was coming off of major knee surgery and Nene and Camby were both young promising big men.

McDyess went on to blow out his knee in an exhibition game during his first season with New York, and would miss the entire season. The next year, he only played in 18 games for the Knicks before being traded to Phoenix as part of the Stephon Marbury trade.

Meanwhile, Nene was selected to the NBA All-Rookie first team while McDyess was sidelined and is still a starter for the Nuggets, while being one of the most efficient and productive centers in the league.

Camby also excelled in Denver, averaging double digit rebounds in five of his six seasons with the Nuggets. He won the Defensive Player of the Year award in 2006-2007 and even posted a couple triple doubles during his Denver tenure.

But hey, at least the Knicks got Frank Williams, right?

Eh, not exactly. Williams was disinterested, out of shape, and found himself out of the league by 2005. Now he's apparently selling weed. 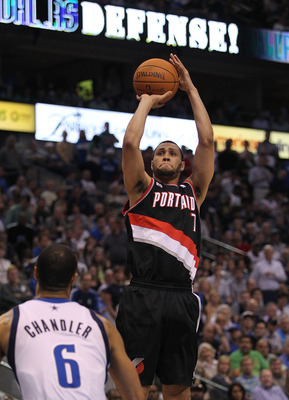 In addition to landing Aldridge in 2006, Portland swapped first round picks with Minnesota (sixth and seventh overall) so that they ended up with shooting guard Brandon Roy and the T-Wolves got point guard Randy Foye.

This one isn't as one-sided as it could have been, as it has since been revealed that Brandon Roy's ACL's no longer exist (sidenote: check out Foye's medical notes; I had no idea this condition existed).

Foye was decent in Minnesota, averaging double digit points in all three years he spent there.

But Roy was spectacular for Portland when his body would allow it. The 2007 Rookie of the Year is also three-time All-Star and two-time All-NBA team selection.

Even hobbled, he put on one of the most memorable playoff performances I've ever had the honor of watching.

Although Foye may actually end up having the longer career, he will never top the marks that Roy achieved in just four somewhat healthy seasons. 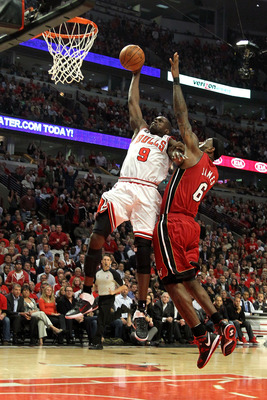 2004 marked the beginning of a series of god-awful, cheap, fan-insulting, future-crippling moves by the Phoenix Suns and apparently empty-pocketed owner Robert Sarver.

Instead of drafting Luol Deng or Andre Iguodala at No. 7, the Suns traded the pick to Chicago for $3 million cash and a 2006 No. 1 overall pick.

That means the Suns gave up a killer nucleus of Steve Nash, Shawn Marion, Amar'e Stoudemire, Joe Johnson, Leandro Barbosa and Deng/Iguodala just so Sarver could add a few more millions to his pile of billions.

Deng or Iguodala would have been perfect fits in Phoenix, incredible athletes who could defend multiple positions, survive the rigors of the Suns seven-seconds-or-less offense, and finish fast break alley-oops from Steve Nash for the next decade.

Instead, Phoenix saved a bit of cash.

But wait, this one gets even better. 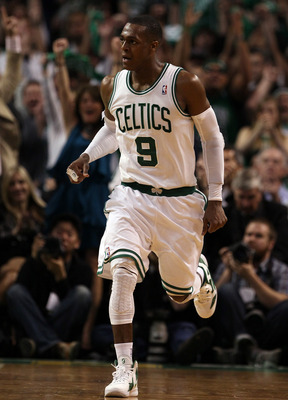 That 2006 first rounder Phoenix got from Chicago?

They ended up picking Rajon Rondo 21st overall...and then promptly traded him to Boston for a 2007 first-round pick and $1.9 million cash.

At just 25 years old, Rondo has already been a two-time All-Star, three-time All-NBA Defensive selection, NBA champion (2008), the best player on a Finals team (2010), and is one of the five best point guards in the league.

He would of been a perfect change-of-pace guard behind Nash and would have been added to the aforementioned Nash-Stoudemire-Marion-Johnson-Barbosa-Deng/Iguodala core.

Yikes. I feel 100 percent confident in saying that team would have won at least two titles, probably more.

But what about that 2007 first rounder that Phoenix got from Boston? That ended up becoming the 24th overall pick...which the Suns of course sold to Portland for $3 million. 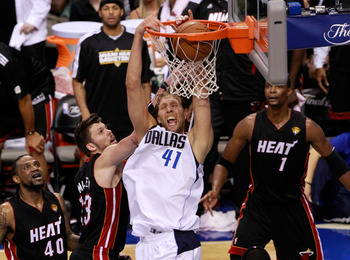 Warning: Milwaukee fans, just click next. This one stings.

Let's have a quick look at the numbers. 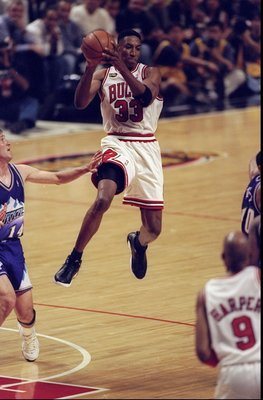 Back in '87, Seattle traded some guy named Scottie Pippen to Chicago for superstar-in-the-making Olden Polynice.

Well, it didn't go too well for the Sonics.

Pippen went on to become the best perimeter defender in the history of basketball (undeniable), one of the best all-around players in history (led the Bulls in points, rebounds, assists, steals, and blocks in 1994-95), a 10-time All-NBA defensive selection, three-time All-NBA First Team selection, six-time NBA champion and first-ballot hall of famer.

Polynice had a lengthy 15-year career, but was never a highly critical player. His career averages of 7.8 points and 6.7 rebounds per game don't exactly scream "hall of fame." 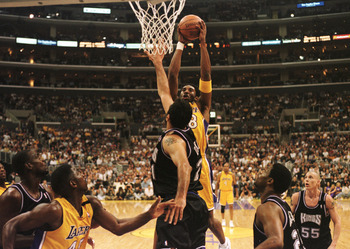 Of course, what would a list of one-sided draft day trades be without the infamous heist executed by the Los Angeles Lakers in 1996.

Well, we all know how this turned out.

Bryant went on to become the second-best shooting guard of all time, a top-10 player in NBA history, five time NBA champion, and living legend.

I could give you a more thorough rundown of all his accomplishments, but that require about 50 additional slides.

Divac had a very good career, highlighted by his time in Sacramento, where he was named an All-Star in 2001.

But he only played three seasons in Charlotte, none of which were anywhere near the spectacular level that Bryant has been at for the last 13 years and counting.