Atlanta Thrashers: 7 Examples Winnipeg Will Not Want to Duplicate 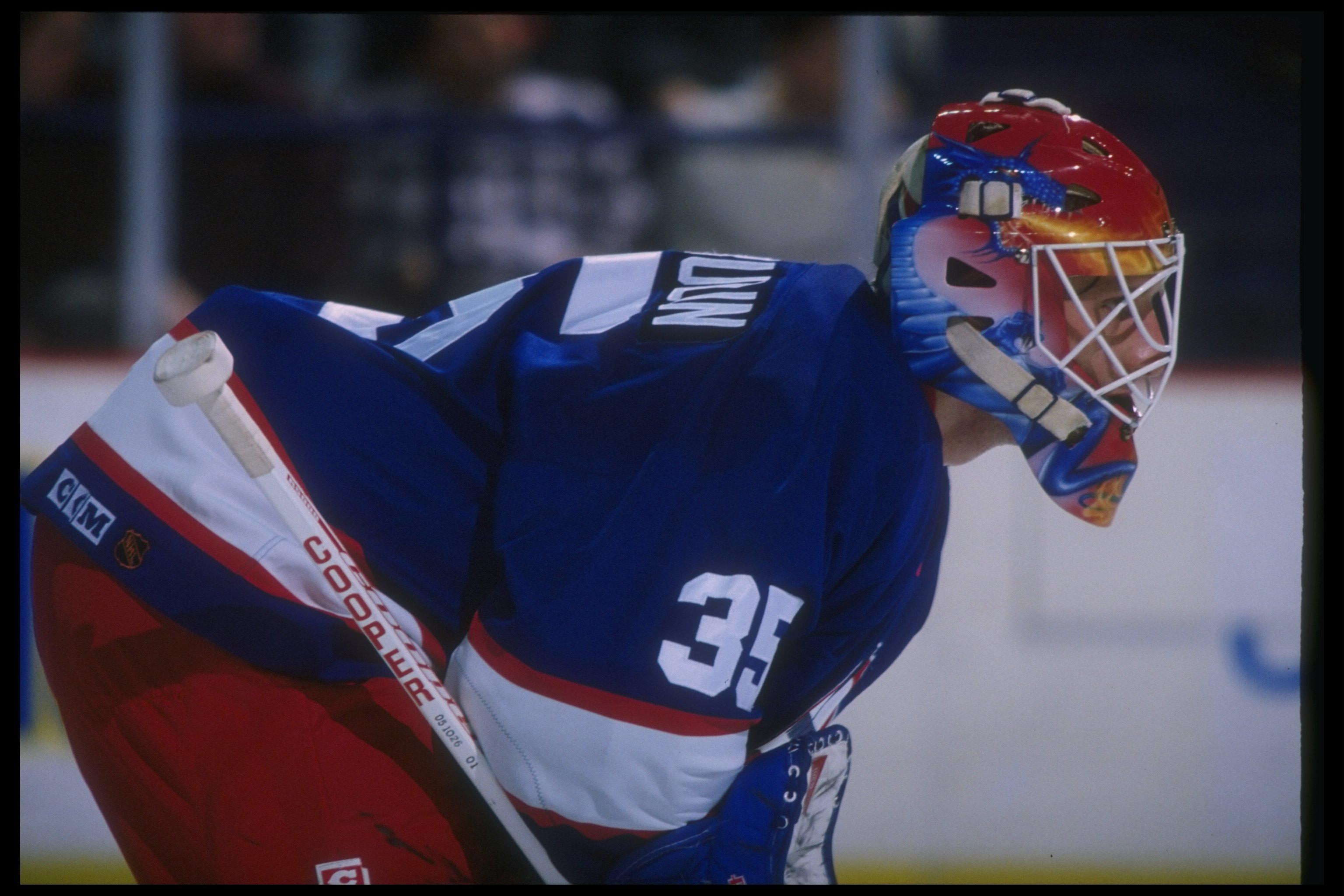 The second attempt to create a successful NHL hockey franchise in Atlanta is officially over.

In the coming weeks you will likely read and hear about several theories as to why the efforts of the Atlanta Spirit, LLC failed miserably.

It should be pointed out that the two relocated teams; the Atlanta Flames and Thrashers did not leave town for the same reason.

The Flames were sold because of finances, not fan disinterest. During the Atlanta Flames run, the city would not at the time entertain building a larger capacity arena than the Omni.

When the Flames were skating in Atlanta with stars like Tom Lysiak, Eric Vail, Willie Plett and Dan Bouchard the stands were never empty. The team ultimately was sold because of the owners’ real estate losses and no television contract revenue to help finance the team.

The Flames took their act to Calgary, Alberta to a larger stadium and also started to see frequent visits to the Stanley Cup playoffs.

Since departing Atlanta the Calgary Flames have even won the Stanley Cup in 1989.

Living in Atlanta and personally experiencing the negligence and malfeasance of the Thrashers leaves me heartbroken for the youthful fans and hockey enthusiasts that such an upheaval will effect for a long time to come.

Scribes and pundits have already identified such failings as poor draft selections, dismal community outreach and the absence of synergy in the Atlanta Spirit group as just a few of the Thrashers' shortcomings.

It is of course very easy to point fingers now that the sale of the team is official, but truthfully the Thrashers were guilty of all of those allegations and more.

The Atlanta Thrashers did not look particularly bad on paper in the draft department but on closer examination it was one of the major issues that helped destroy their long-term prospects of creating a viable franchise in Georgia.

Many expansion franchises like the New York Islanders, Buffalo Sabres, Tampa Bay Lightning and the Nashville Predators built their teams into playoff contenders by drafting the right combination of skill and role players.

A good GM is painfully aware that a team must be built through draft choices, astute trades and free agent signings.

The Thrashers drafted Ilya Kovalchuk and Dany Heatley who both became stars, but upon closer examination the Thrashers could have made much different draft selections that were available to them in their time in Atlanta.

There is little doubt that if the Thrashers' current management team was in place just two years earlier, the team would still be in Atlanta and likely would have earned a playoff berth.

Consider all the payroll and attitude issues that Dudley and Ramsay had to deal with prior to the start of the 2010 campaign and then contemplate the undisclosed budget constraints and rumors players and management had to deal with on an almost daily basis.

Now stop and consider that they still barely missed a playoff spot.

Dudley did all of this while trimming the payroll down to one of the lowest in the NHL which will greatly benefit the Winnipeg team.

Unfortunately, Rick Dudley will not continue as the GM when the team moves to Manitoba. 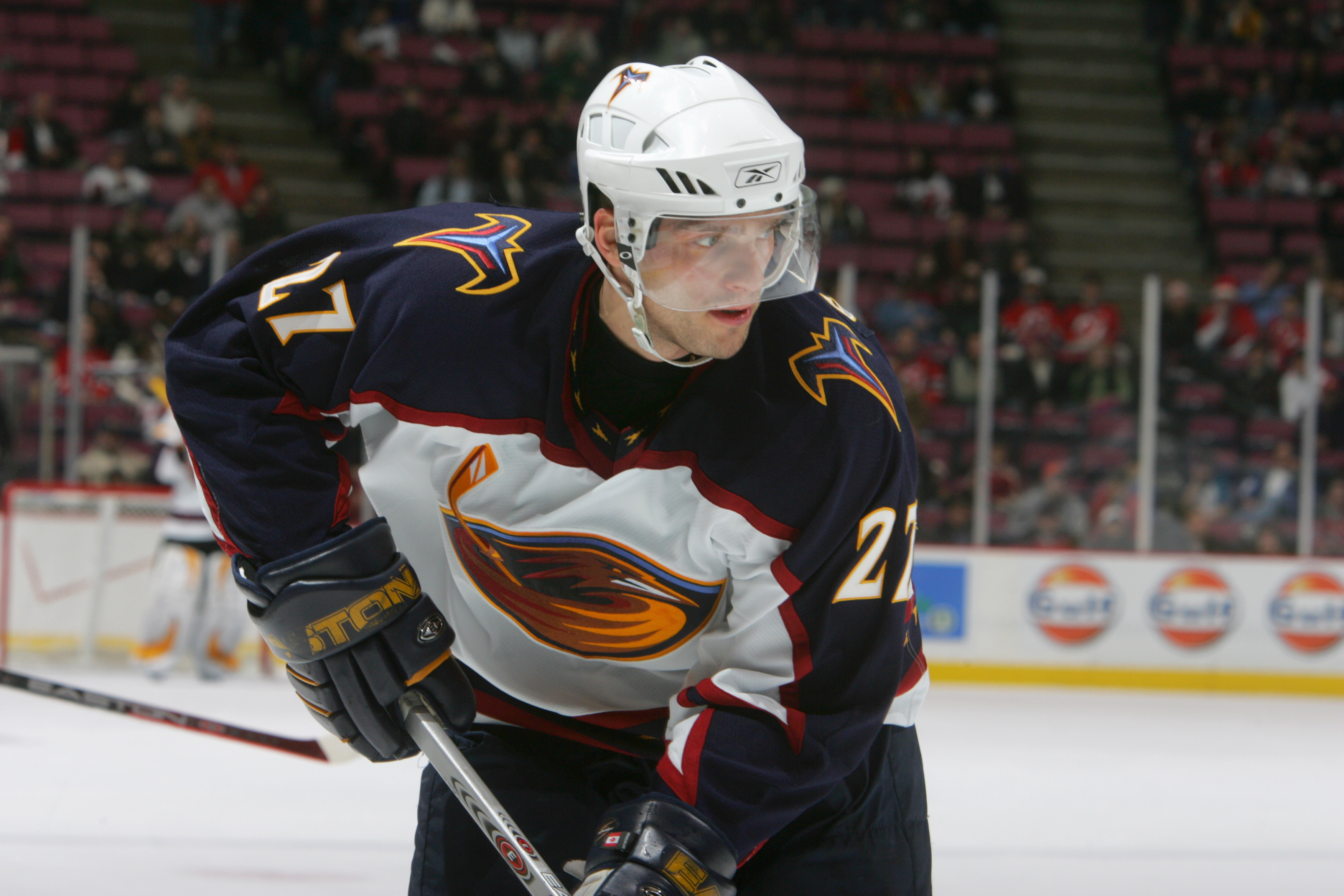 In 1999, then Thrasher GM Don Waddell was absolutely sold on the prospect of No. 1 draft choice Patrik Stefan being a standout NHL player.

He was quoted on the Atlanta Thrashers' website saying that despite two concussions and a 11 goal in 33 game professional performance in a developmental league, "I am not worried about Patrik."

The Thrashers stayed with Stefan for several years before sending him to Dallas and receiving very little in comparison to the team's investment in him back.

Stefan represented the first in a long line of mistakes no NHL franchise can afford to make and remain viable.

Atlanta draft picks that did not pan out resulting in the team's sad upheavel to the cold province of Manitoba.

Many are not aware that Waddell had the chance to select future All-Stars Daniel Sedin, Henrik Sedin or even Ryan Miller instead of Stefan in the draft. 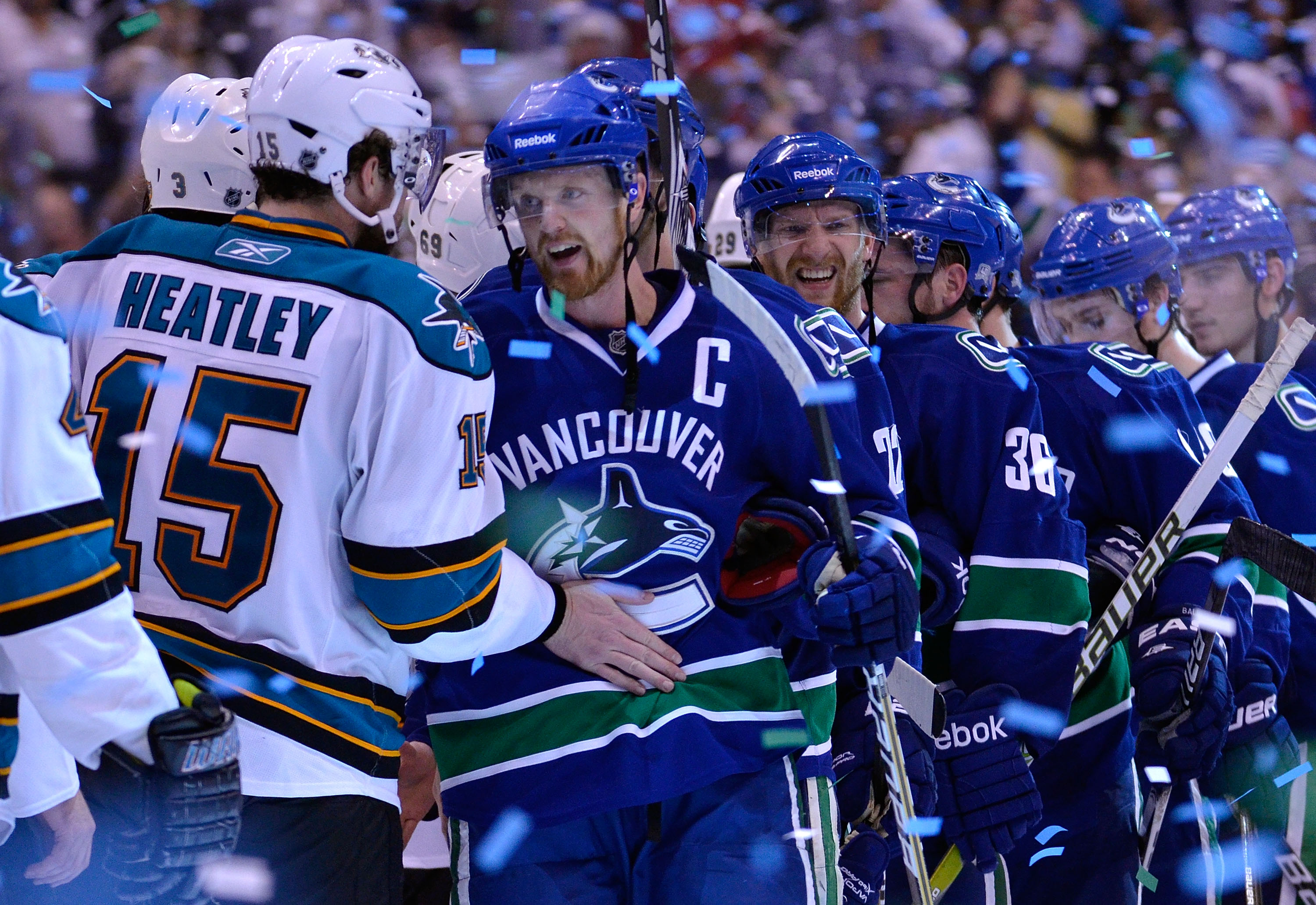 Dany Heatley performed well during his time on the Thrashers.Rich Lam/Getty Images

2000 NHL Draft pick Dany Heatley performed well while playing for the Thrashers on the ice.

The left wing exhibited scoring, passing and skating prowess that earned him high marks in his rookie season.

What the team missed in selecting Heatley was more to do with his overall character than his impeccable hockey skills.

Heatley asked the Thrashers to trade him after he and another member of the Thrashers were involved in a fatal automobile accident in Heatley's car that left Dan Snyder dead at 25.

The Thrashers traded Heatley to Ottawa for Marian Hossa.

Soon after, Heatley demanded to be traded from Ottawa and Hossa left the Thrashers.

The results again were clear—a draft selection resulted in a net loss for the Thrashers.

Heatley is still booed unmercifully every time he returns to Ottawa and more importantly he cannot seem to nudge the Sharks to a Stanley Cup Finals appearance despite the strong lineup in San Jose and his obvious scoring ability. 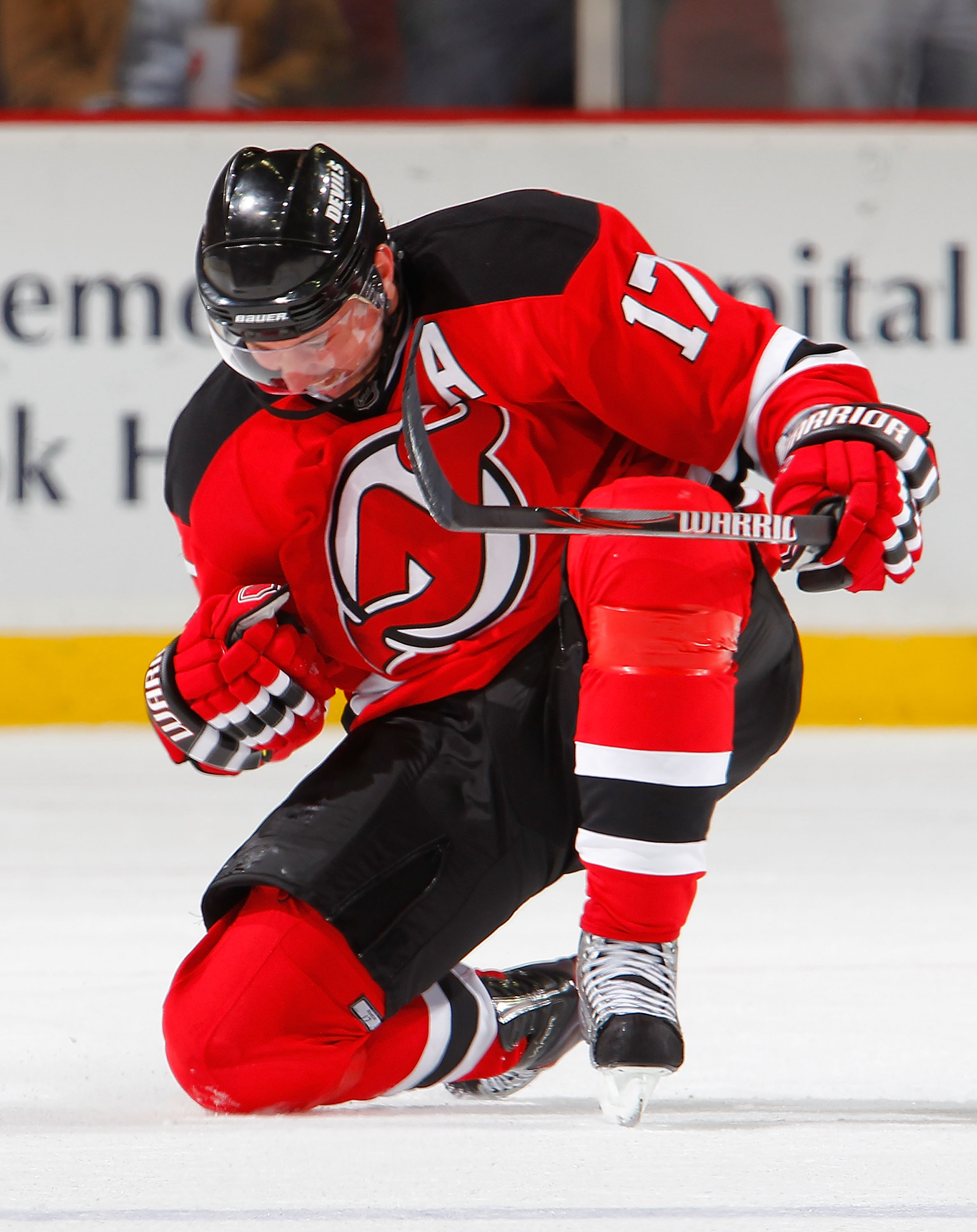 Ilya Kovalchuk appeared to be the right player for the Thrashers to select in 2001.

Central Scouting rated him the top player in the draft and the Thrashers selected him with their No. 1 pick in 2001.

Kovalchuk has immense offensive talent, but Thrasher fans got used to not knowing whether they would see the Kovalchuk that possessed superstar talent or the other player who showed up from time to time.

That other player sulked and displayed a bad attitude. "He would hold the team hostage with his talent" said a former Thrashers player who played with Kovy.

The team made several mistakes in pampering the Russian star, including appointing him captain of the team and not trading him well before his contract was up for renewal.

When the Thrashers finally traded Kovalchuk to New Jersey, you could almost feel the weight lifted off the team.

The Thrashers without Kovalchuk began to win hockey games as a team and celebrate as a team.

Jason Spezza was available after Kovalchuk was selected. 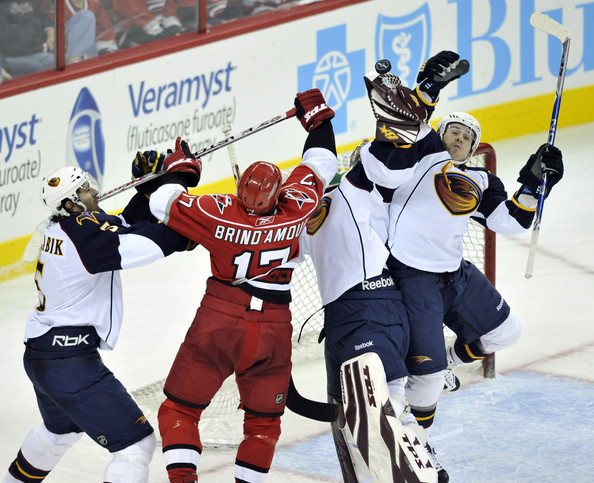 Boris Valabik, left, at 6'7" and 255 pounds, was drafted in hopes he would be a physically intimidating presence on the blue line.

Boris Valabik could have been the next Zdeno Chara. After all he is 6'7" and weighs 255 pounds. He was a intimidating force, or should have been. He was selected 10th overall in the first round and was considered by NHL scouts to be in the top 40 during his junior hockey career, moving up in ranking in his final year of juniors.

Valabik could never crack the Thrashers lineup in five years, causing GM Rick Dudley to finally make a decision someone else should have already made.

He was packaged with Rich Peverley and shipped off to the Boston Bruins for Blake Wheeler this past season.

He is also infamous for a YouTube post which features him getting pummelled in a fight with Rick Rypien. That video already has collected over 200,000 viewers.

Rob Schremp and MIke Green were selected 25 and 29, respectively. 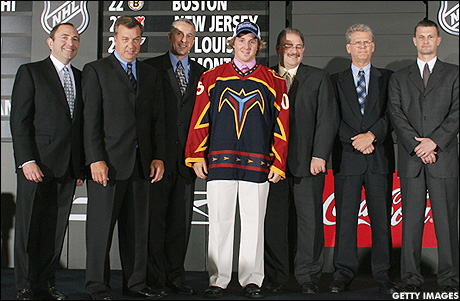 Drummondville is the birthplace of NHL Hall of Famer Marcel Dionne. As a French-Canadian, Bourret idolized Dionne, who had a stellar junior career for the St. Catherine Blackhawks, but unfortunately he never could translate his play to get anyone to draw a comparison.

Bourret's training camp in his rookie season was so dismal he never saw NHL action like most first round draft choices.

Bourret dwelled in the minor leagues where he still performs today. He was soon forgotten by the Atlanta hockey fans but is one if the biggest busts in Thrashers history.

T.J. Oshie and Paul Statsny were selected well after him.

6. The Thrashers Failed to Attract the City's Largest Demographic 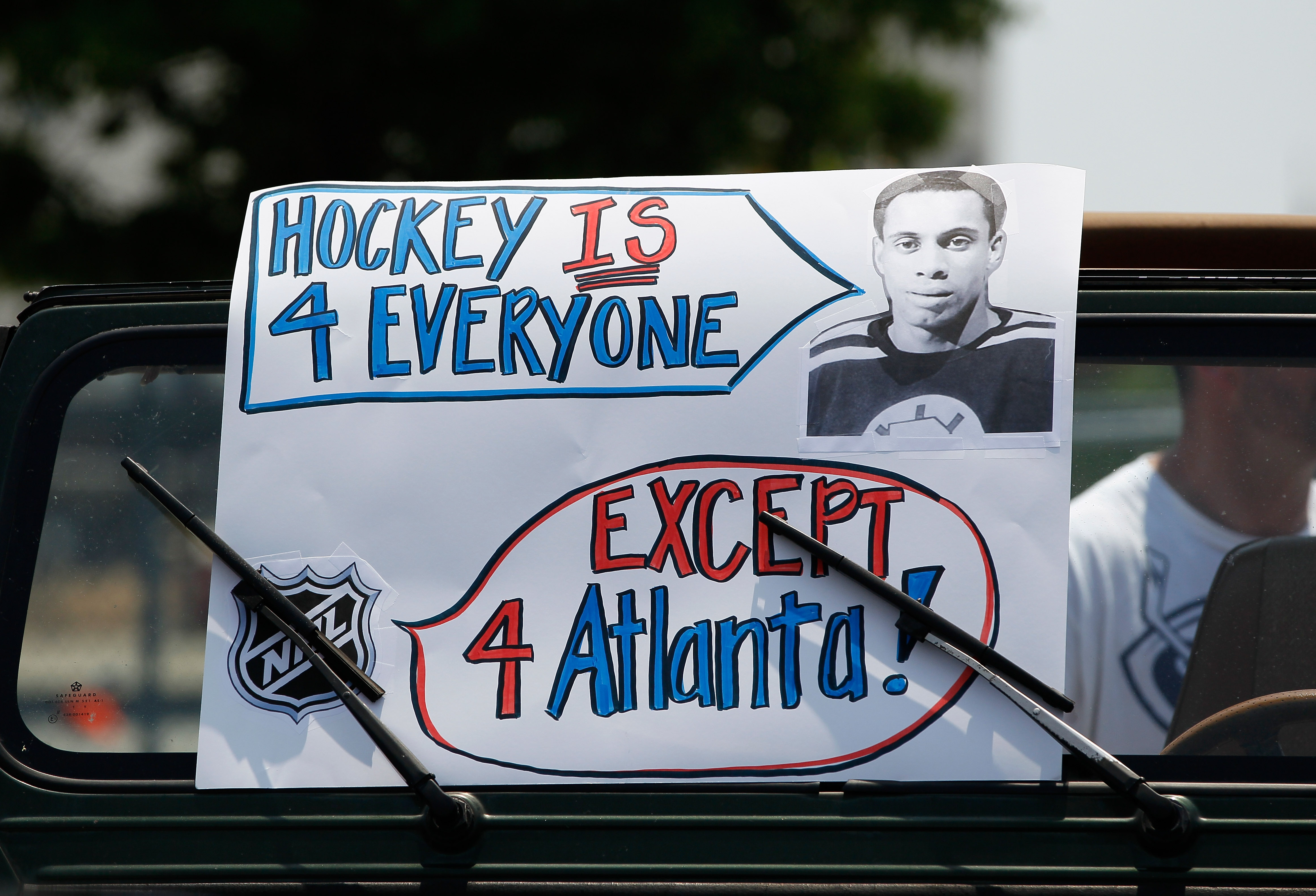 Demographics in Atlanta clearly pointed out the need for community outreach to the African-American community.

Atlanta has the one of the wealthiest black populations in America and almost no one in the community was aware that the Thrashers had several players of African descent on the team.

During the previous season there was lots of talk about "reverse discrimination" and ridiculous assertions about the African descent players costing more deserving players jobs, but most astute hockey fans saw the ability in players like Dustin Byfuglien, Evander Kane, Johnny Oduya and Anthony Stewart.

The Thrashers were unable to capitalize on the marketing of those players to the African-American consumers who might go see a hockey game.

The team also never had a consistent outreach program designed to show urban children the basic fundamentals of the game.

"We missed a lot of great opportunities to show off the game in urban areas," said Thrashers hockey instructor Uriah Jones.

Winnipeg will have entirely different demographics but their outreach will probably be different as well. 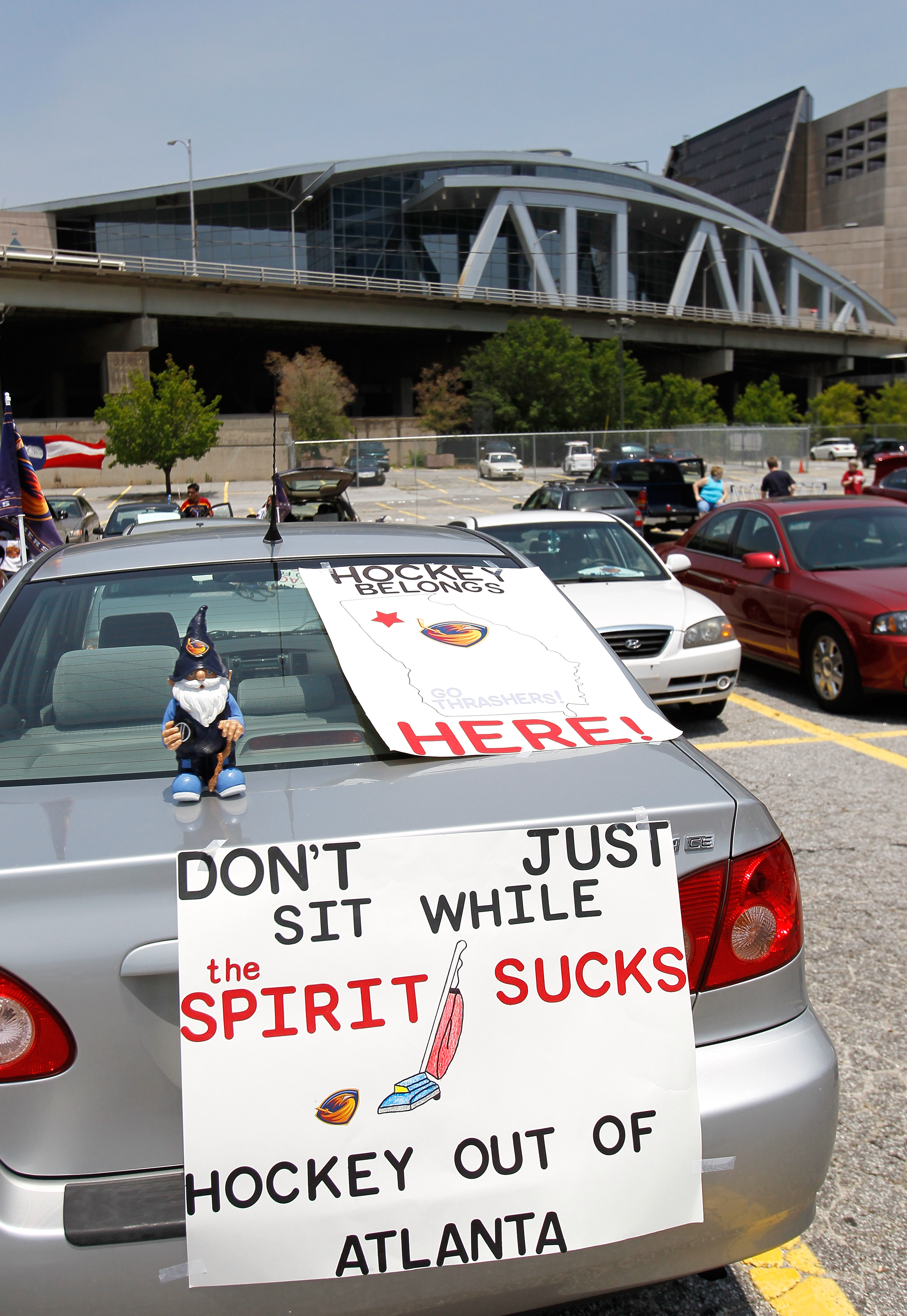 The Atlanta Spirit LLC could not create a fna following or playoff teamKevin C. Cox/Getty Images

These nine businessmen are divided into three groups, each headquartered in Atlanta, Washington, D.C. and Boston, and each group shares equal voting power within the group.

Such a management configuration is not functional in most corporate entities and that proved to be the case with the Atlanta Thrashers as well.

Most of the equal partners were more interested in management of the NBA's Atlanta Hawks and spent very little time trying to build the fan base for the ice hockey team.

Bruce Levenson was the only active partner with the hockey team and given the losses and concerns of other partners who were not knowledgeable about hockey it is easy to see why the group soured on the Thrashers.

One of the group's biggest mistakes was the selection of Don Waddell as the General Manager of the team and later the President.

The other serious problem that led to the team's demise was the subpar scouting staff that led the team to pick several under-performing draft selections.

Mark Chipman, the billionaire who leads True North Sports Entertainment group said "It will be important to build the team from the draft."